I want to stress that I do not celebrate Christmas just so I can decorate my entire house with swaths of garland so fresh the whole first floor smells like a forest and squirrel poop.  No, I also celebrate Christmas for more altruistic reasons; the presents. 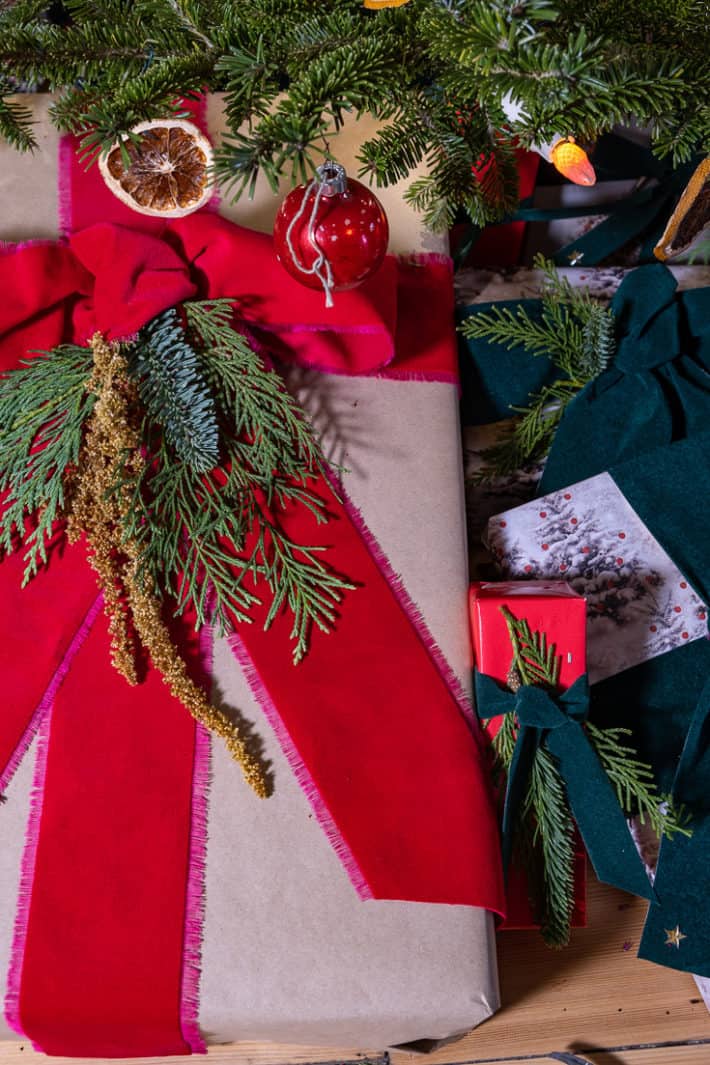 I would like for you to gasp so hard when you see my wrapping that people try to perform the Heimlich maneuver on you, fearing there's a drumstick wedged in your esophagus.  That is my goal.

Anything less than that and I'm disappointed in myself.

This year I got my wrapping inspiration from my very own Christmas Pledge Facebook group, which is a group I created for people to motivate each other to create their own near death experience Christmases.  We also encourage each other to gain weight, drink wine and throw mittfuls of tinsel on anything in our path. Close to the beginning of the Christmas Pledge, members were already talking about wrapping ideas and a few people mentioned Furoshiki,  the Japanese art of wrapping in fabric.

I thought to myself, Karen, that's what you'll do this year.  Simple, elegant, kind of old timey, and no need for bows.  Great.  I ran myself to Ikea to pick up some cheap fabric. I wanted velvet but they didn't have any, plus I realized velvet would be way too thick to wrap with.  Tea Towels also ran through my mind but all of my presents would have to be the size of those forest squirrels traipsing through my garland for the tea towel to be big enough, so that idea was eliminated.

I ended up with several meters of natural and black cotton.  It was lightweight and cheap.  That night I got to wrapping my first present.  It looked weird.  So I unwrapped the present and tried again.  No. It still looked weird.  And by weird, I mean, like a diaper.  The present looked like it was wrapped in a giant nappy. No matter what I did or how I adorned it I would be handing over the Christmas equivalent of a baby toilet.

Shocking, but wrapping your presents in a diaper can make them look like shit.

Which means here I sit, on December 1st, without a present wrapping idea.  I'm so ashamed.

I know I'll come up with something but that doesn't help you people who are staring at your computers right now waiting for me to spurt out a brilliant choking hazard.

For now I'll remind you of some of my past ideas in case you'd like to glom onto one of those. 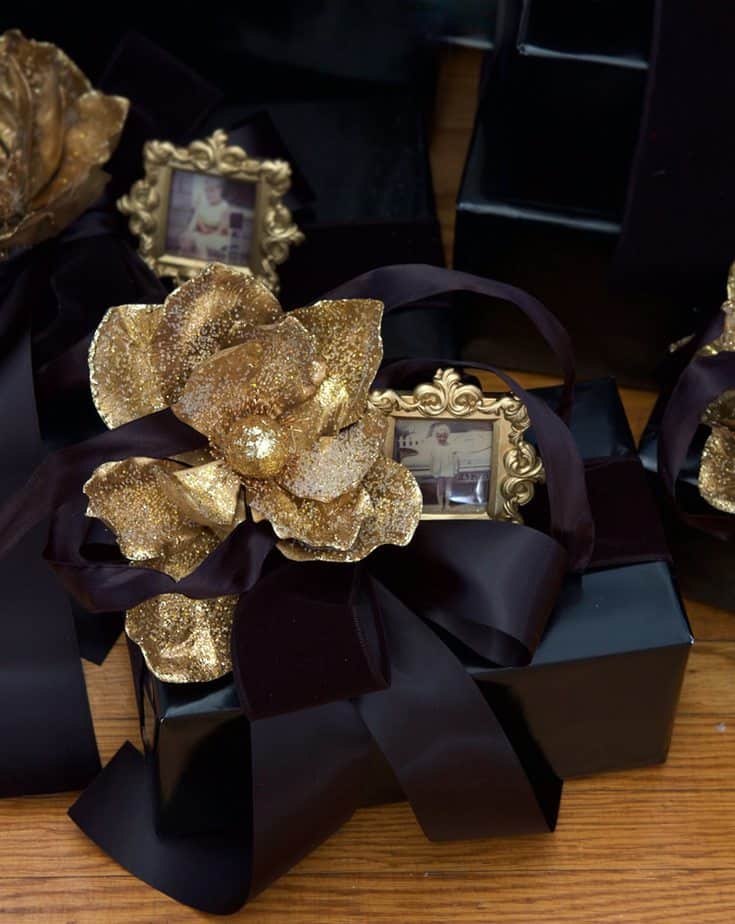 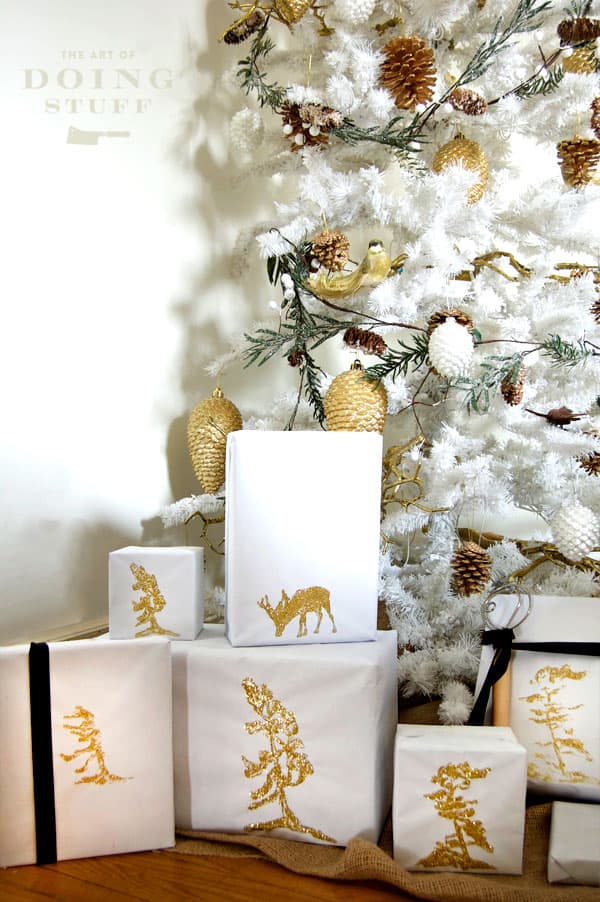 Christmas wrapping 2015.  Tracing the iconic Group of 7 trees onto white paper and glitterizing them.  I like the Group of Seven so much I bought a Group of Seven jigsaw puzzle last year. 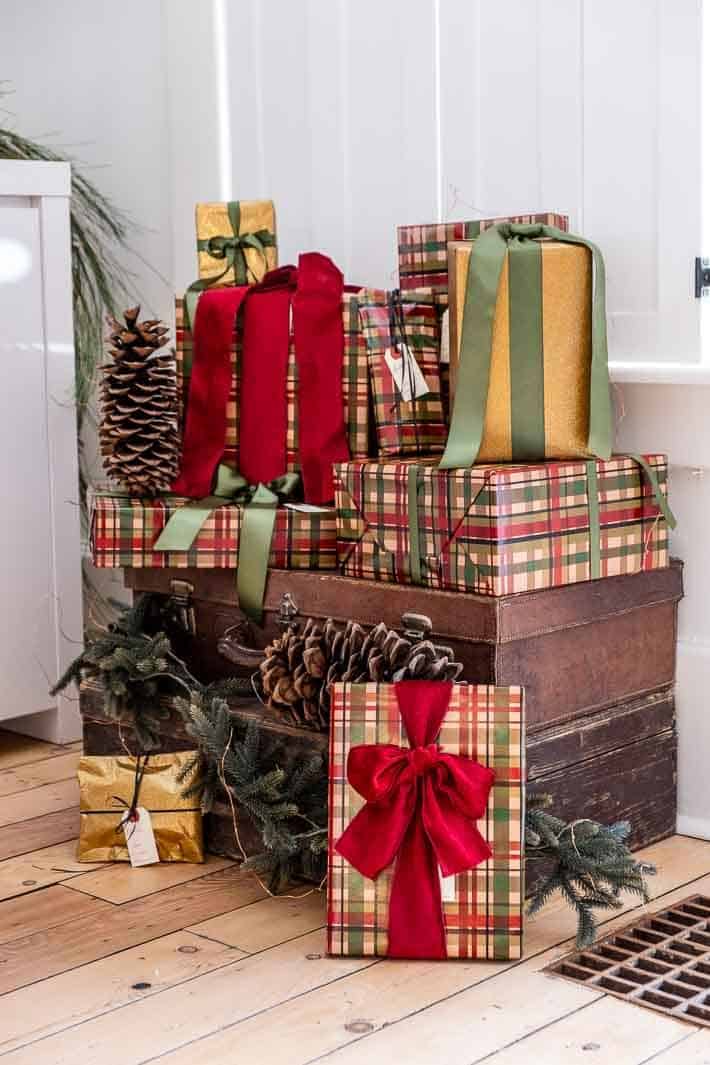 Cozy, comfortable but sophisticated wrapping. Kind of my favourite. I say that about a lot of them though.

Have you been doomed to using up old ugly wrapping paper? It's not the end of your beautiful present wrapping dreams.

Tie it up with a really nice ribbon and you'll be in good shape. Add a sprig or two and you're good to go. 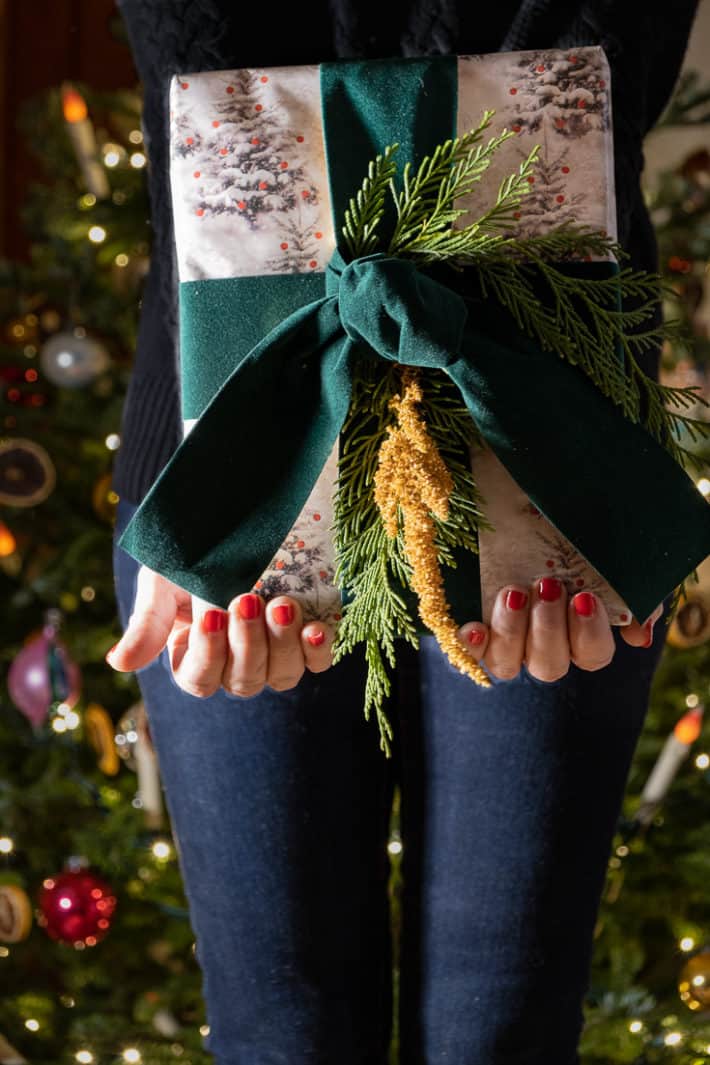 This is just cruddy dollar store paper with wide velvet ribbon.  Not even the good velvet ribbon, just regular cheap, hard velvet ribbon. Although I must warn you that after posting this wrapping last year someone emailed me to say it was THE MOST DISAPPOINTING THING THEY'D EVER SEEN.

Obviously this person had never had their Apple watch light up and thought they made their move goal for the day, but it was actually just their stand goal. 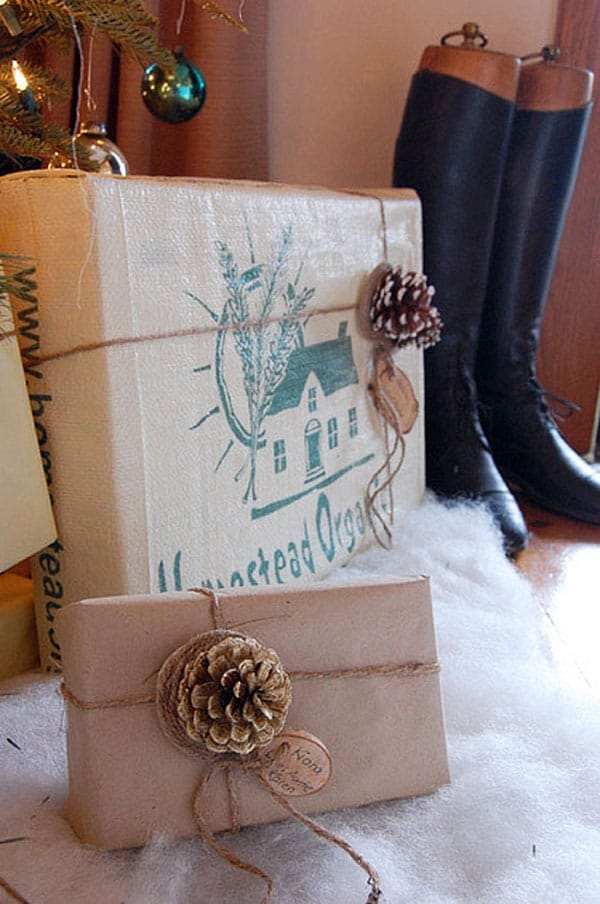 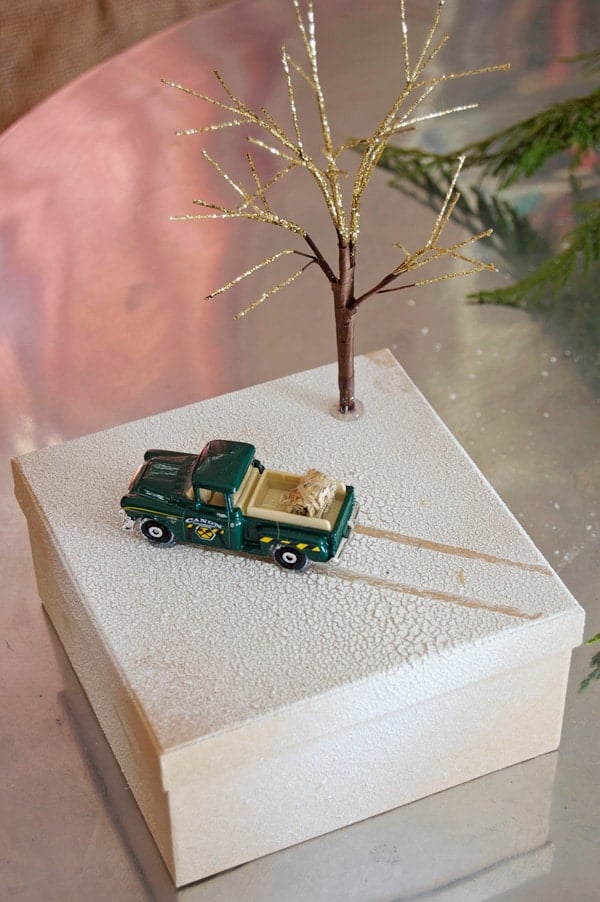 THE wrapping gold standard.  Create a multitude of scenes on top of wrapped boxes like this one or my other favourite, the skating pond in the forest, complete with ice rink. Christmas present dioramas will win ANYONE over. 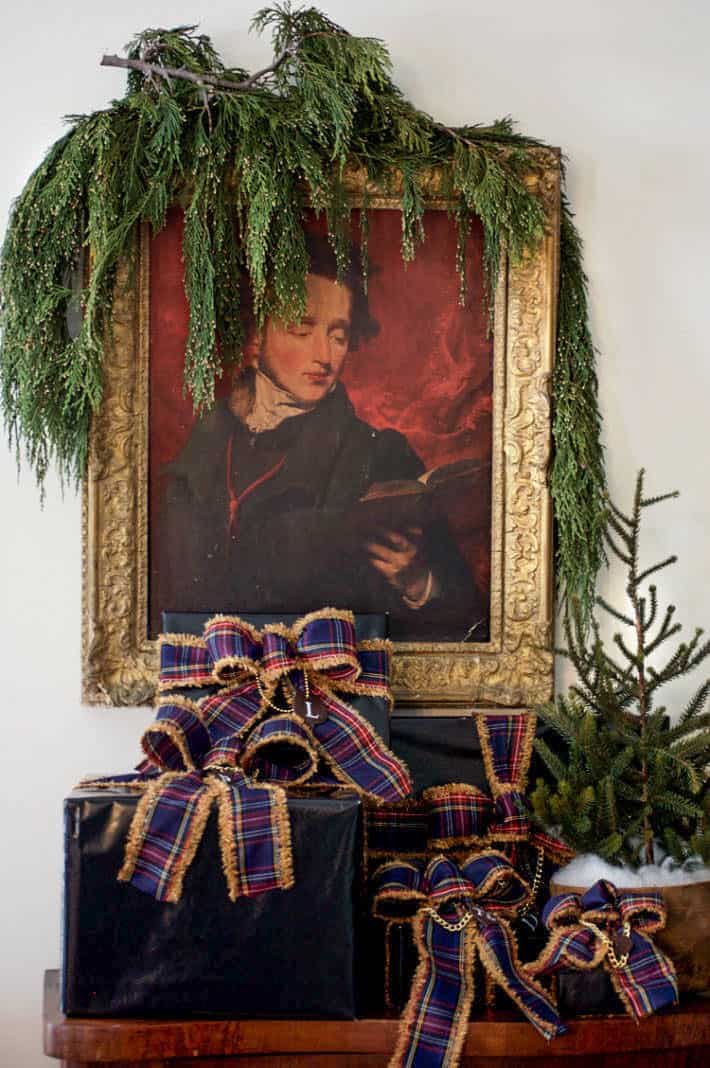 Again with the ribbon

A few years ago I found the most beautiful ribbon, perfect for my house EVER. Plaid with gold fringe. For tags I used gold chain by the foot from the hardware store and added glitter and leather tabs with the recipient's first initial.  See how I did all the wrapping and tagging  here.

At this point the only wrapping idea I can think of that would make someone choke is dipping the presents in ammonia.  Which would be especially effective if wrapped in a that diaper.

Have a good weekend, good luck with your wrapping.  And don't forget.  It isn't prosecutable if you're killing them with kindness.

p.s. This year's wrapping will be posted on Monday! 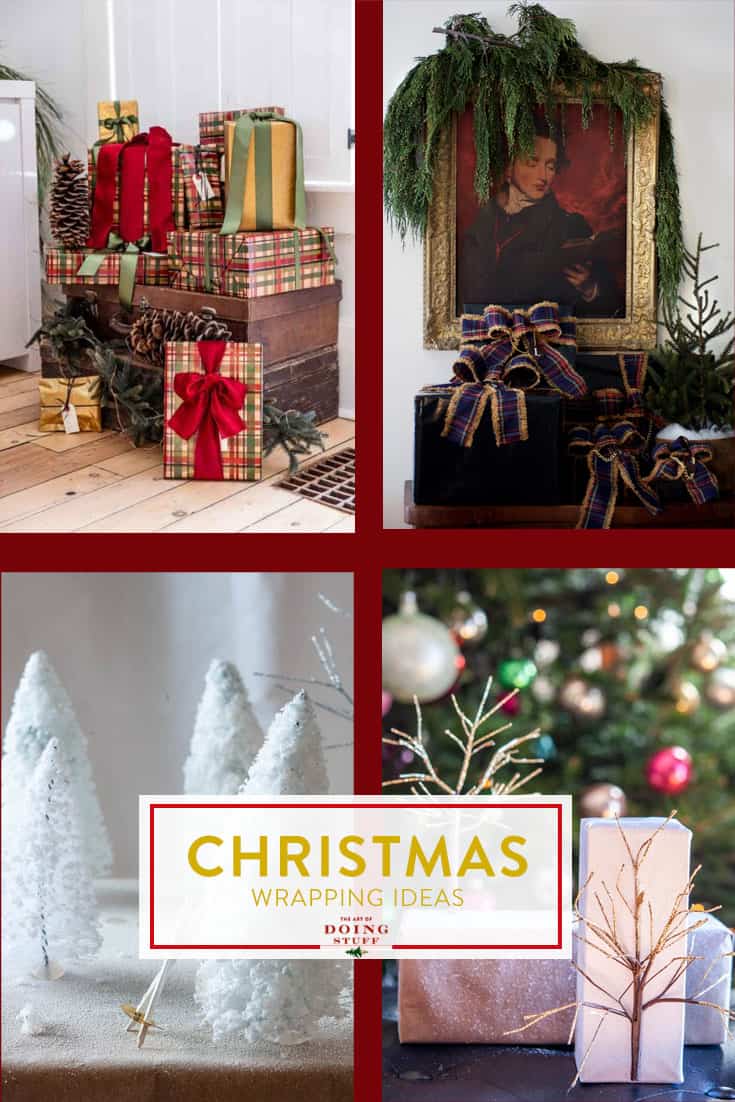