So I still haven’t baked.  A thing.  I’m not a baker.  My guess is it’s because I don’t like baked goods.  Unless it happens to be a baked antojito.

You can take your cakes and pies and cookies and shove em in that hole in your mouth, but I’ll take a bag of chips over a chocolate chip anyday.

Unless …. you melt your chocolate chips into the easiest most impressive, delicious treat in the WORLD. 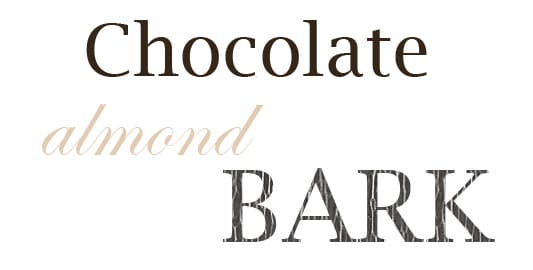 Toast your almonds in a pan.  Just heat them over a medium low heat, stirring often until they smell toasted. 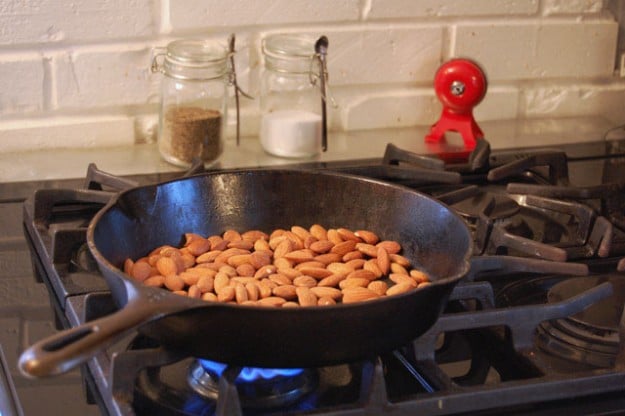 Melt your chocolate and shortening over the stove in a double boiler.

Put a few inches of water in the bottom pot, and heat the chocolate on the top over a low simmer.  The better the and lighter the chocolate the more easily it will melt. 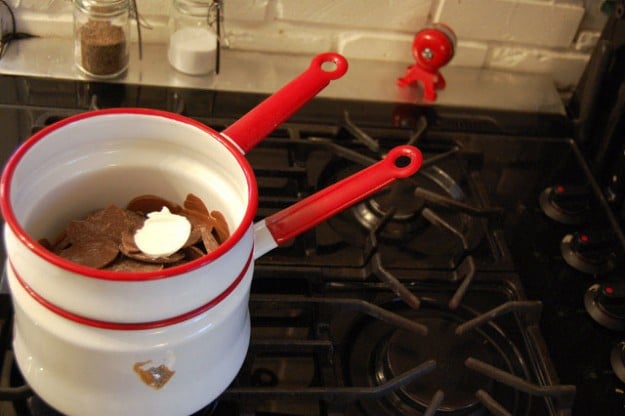 Once the chocolate is melted, stir in your almonds.

Pour everything onto a baking sheet lined with parchment paper.  I’m sure waxed paper would work too.

Try and get your almonds distributed evenly.  Having unevenly distributed almonds has been known to lead to war (s).

Bang the pan a few times on the counter to get rid of air bubbles in the chocolate. 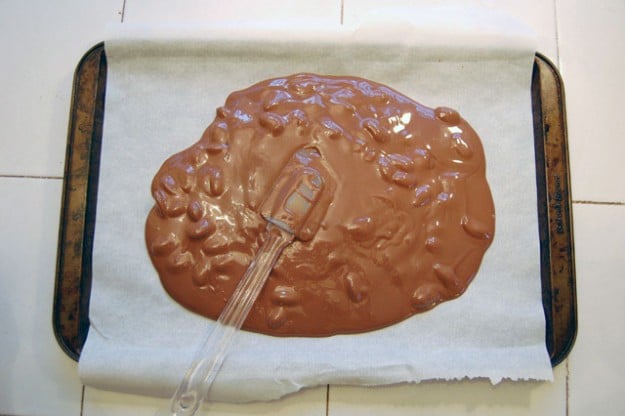 Stick the whole thing in the fridge for a few hours to solidify.  Remove it from the fridge and break the almond bark up with your hands.  Then eat it.  With your mouth.

Doesn’t it look delicious?  All that expensive, beautiful chocolate, melted into a bark like form.  The only problem was when I was doing this recipe, I didn’t have any shortening, which I didn’t notice until I was putting the chocolate in the pan.  So I called my “emergency ingredient neighbour” and screamed into the phone.  AHHHHH!  I’M HAVING A BAKING EMERGENCY.  A BAKING EMERGENCY I TELL YOU!  I NEED HELPPPPPP.  Well.  My neighbour is 80 and she didn’t take kindly to me screaming at her like that about an emergency.  Something about blood pressure and a heart condition.  I dunno.  I only pay attention to her when I need ingredients.  She had some shortening so she threw it to me over the fence.  I thanked her politely, because I’m nothing if not polite to everyone’s face.

Then I ran inside the house and melted that shortening into my very expensive, I’m better than you, chocolate.  Then I noticed a smell.  A kind of … rancid smell.  Like a consitipation fart.  Mixed with gasoline.

It was the shortening.  It was rancid.  Rancid like a thousand rotting monkeys.  So, I mixed everything up and made it pretty for the sake of the post.  But this particular almond bark that you’re looking at?  It’s poison almond bark.

I’ve since bought shortening and remade the bark.  I’ve also since notified my neighbour that the next time I give her a scare, she doesn’t have to retaliate by trying to kill me.  A simple “You scared the bujesus out of me” will do.

So if you’re worried you didn’t do any baking this holiday season, don’t worry about it … just do this.  Whether you make the poison or the unpoison version is entirely up to you and who you plan to give it to.