I have a dream every so often where I can hop a little bit, flap my arms and BOOM!, suddenly I can fly.   Most people fly in their dreams.  Usually it’s a nice, pleasant roam about town from a different perspective.  A fun feeling of being free, and alive, knowing you have the ability to poop on someone’s head.

However, when I fly in my dreams it’s mostly a terrifying episode where I’m trying to escape from someone who is trying to kill me.  It’s usually a group of people actually and they’re carrying glue guns and meat cleavers, screaming at me about the price of sparkles.  Weird.  I rarely even use sparkles let alone set the price for them.

I wonder if my chickens dream the same thing.  About flying to escape danger that is.

Little known fact.  Chickens can fly.  Just not very well.  Every once in a while Norma will take a flying leap and make it to the end of the run before crashing into a bale of straw and screaming at whatever chicken happens to be around her at the moment.

If anything were to try and catch her I have no doubt she’d never be able to escape by flying but she might be able to buy some time by confusing her attacker with her  tumbleweed approach to trying to fly. 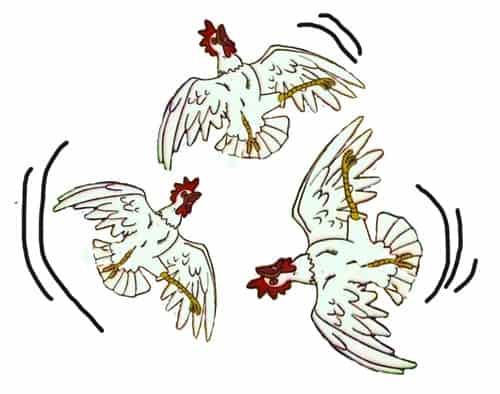 At least her coop is elegant. Not that she cares. I got an email from The Good Doctor Richardson the other day that linked to an article saying the healthiest, best laying chickens often come out of the crappiest coops. The reasoning behind this is crappy coops that look like they were built by the first of the 3 little pigs have really good ventilation, which in turn creates good air quality for the little birds.

I’m the first to admit the coop I built, although very practical, has a lot of elements that are strictly for me. Like how it looks. I’m pretty sure the chickens don’t care how the coop looks. Except maybe Walnut. She’s fussy that way.

Even though my own coop is a more streamlined, modern approach to a coop, I can honestly say, I love all chicken coops. Not just ones that look like mine. In fact some of the most dilapidated coops are among my favourites. It probably stems from my Grey Gardens obsession.

Last week I asked you all to send in pictures of your coops and you did. Here … are your coops.  From rustic to funky, cartoon-like to cabin-like.

Thanks to everyone who took the time to send in pictures.