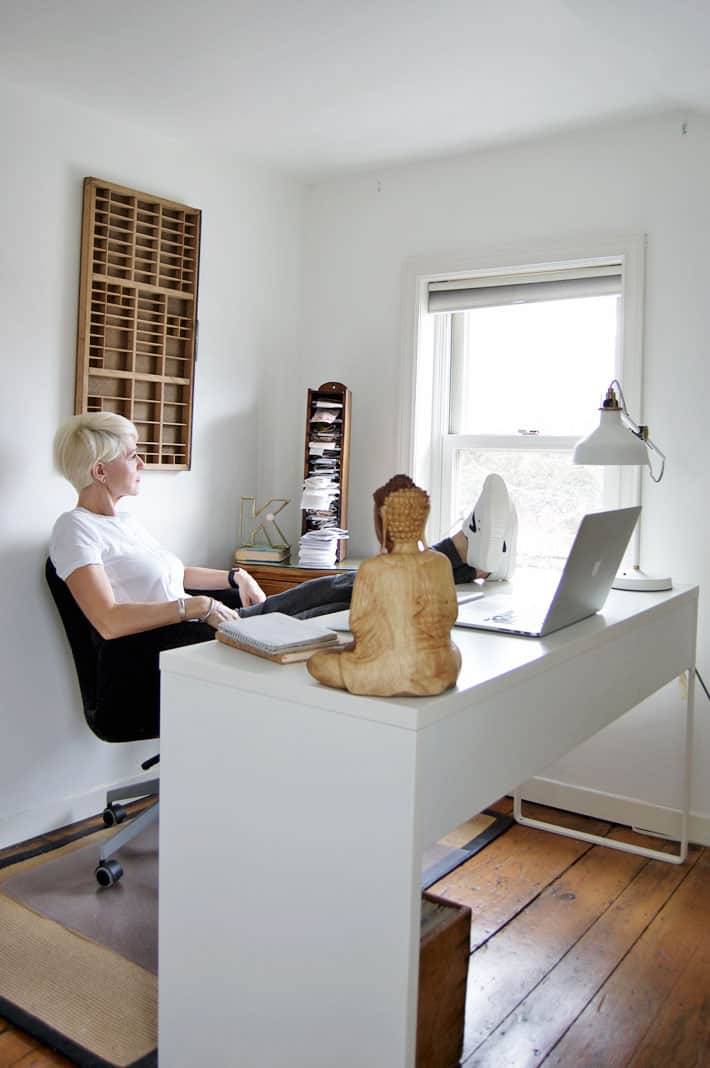 The following post will serve as an instructional DIY for those of you who happen to own a Macbook Pro laptop (mid 2009 version). Yup. An oldie but a goodie.  For the rest of you it will be an INSPIRATION.  Or a bore. But keep in mind I try to make my most boring posts ALSO the most hilarious. So you might wanna keep reading.

As a blogger who blogs things about bloggy stuff I consider my laptop to be not only a tool, but my lover.  That might be a bit extreme.  And weird. Let me start again.

As a blogger I consider my laptop to be not only a tool, but my ballroom dancing partner.  Named Juan.

As my dancing partner, my laptop and I need to be in sync and be able to rely on each other every single day. My laptop relies on me to keep it clean and wipe its brow. I have to make sure he stays cool, and doesn’t get overstuffed or overheated.  Lately my laptop has been an overstuffed, overheated, dirtbag.  We don’t love each other anymore. Plus he takes a realllyyyy long time to turn on.  Who has that kind of time.

I got this laptop years ago and it’s served me well, but I need a new one.  It runs slowly, the trackpad barely works and the battery doesn’t hold a charge. At all.  So my portable laptop is only as portable as the nearest electrical outlet.  It just can’t keep up with me basically.  Typical of most men.

If you own a laptop you know exactly what I’m talking about. After a few years it is so slow it can barely open up webpages, you can only have one program running at once and even then it only barely works.

So you grit your teeth, silently swear at Bill Gates, Steve Jobs and all of their peons and buy a new one.  Don’t get all up in arms about me shaking my fist at the dead Steve Jobs, because I also silently thank him 10 times a day.  I curtsey to my iPhone every  morning. So I’ve been  planning on buying a new laptop for the past 2 years.  Then last year, the year of the great depression, I was really watching my money so I made due.  This year I’d already looked up which laptop I was going to buy. My plan was to buy a refurbished Macbook pro (which comes with the same guarantee as a new laptop) with the most memory and power as I could afford.

Then along came a sewer line that crapped on my computer plans.  $5,000 later I have a beautiful, sleek, new sewer line and a dance partner that can no longer jive.

Buy a new battery for my computer and some much needed RAM.

It won’t be a new computer but it should work at a quicker pace than my current partner and I should be able to wander around the house with it again until next year when hopefully nothing in my house carrying raw sewage will explode.

Today I’ll show you how to replace the battery in your laptop.  Next week, I’ll explain what RAM is and how easy it is to add more.

I ordered both my battery and RAM (memory) from Amazon

then I started researching how to take apart my laptop without wrecking it. 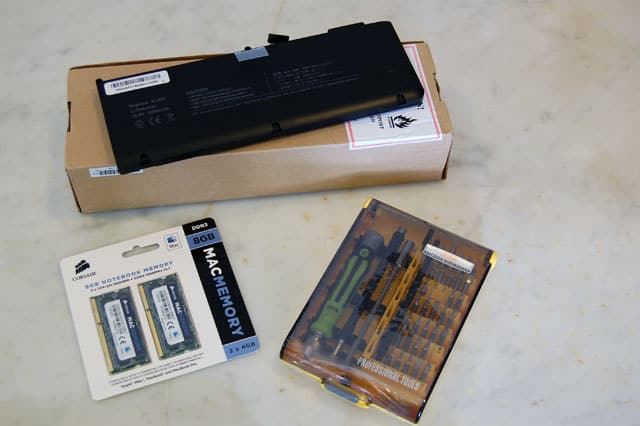 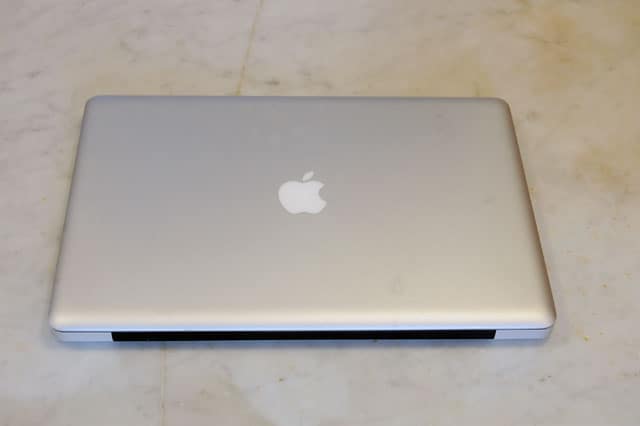 How to Replace an Old Macbook Pro Battery.

To replace the battery flip your computer over (make sure it’s turned OFF).

All around the edges there are tiny screws.  If you have a tiny screwdriver kit for fixing eye glasses, one of those screwdrivers should work on the tiny Phillips screws on the back.

Because I wanted to make sure everything went perfectly, I went out and bought a laptop repair screwdriver kit from my local computer store. You can get these on Amazon

too.  Each laptop will have a different type of screw holding the battery in so you have to make sure you have the right screwdriver for your specific laptop. 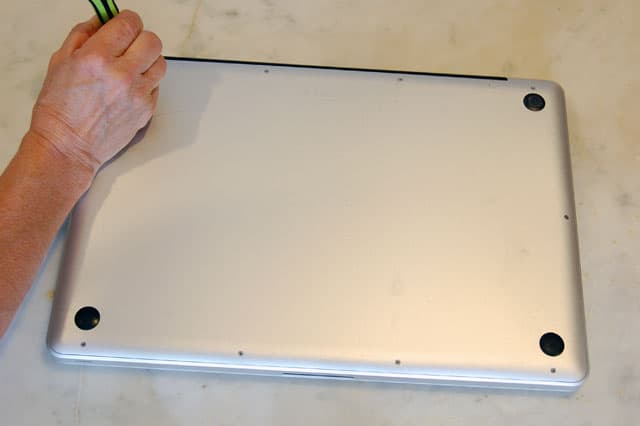 The back of my laptop was held on by a bunch of very short screws and 3 long screws.  If you have different types of screws as well, mark down which ones go where.  You think you’ll remember when it’s time to put it back together, but you won’t.  And that might make you cry. 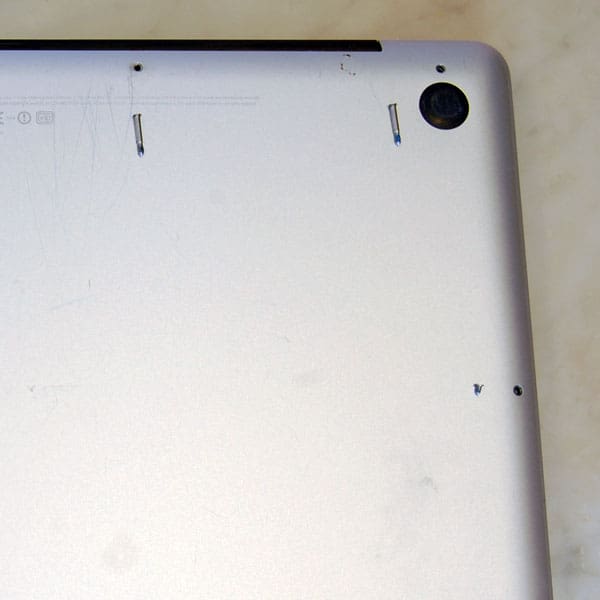 With the screws removed it’s just a matter of lifting the bottom of the case off of your laptop. 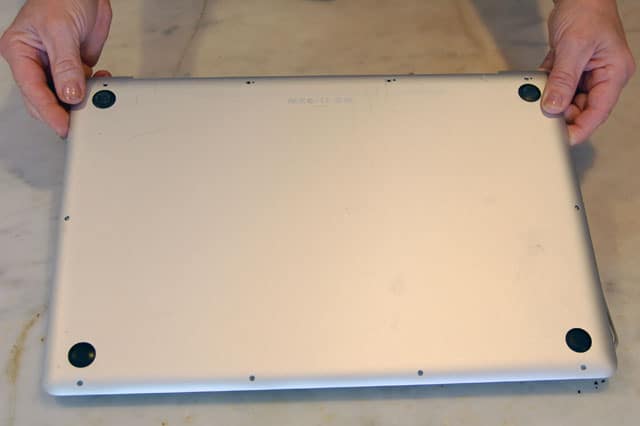 Lift from the side of the laptop where the vent is. 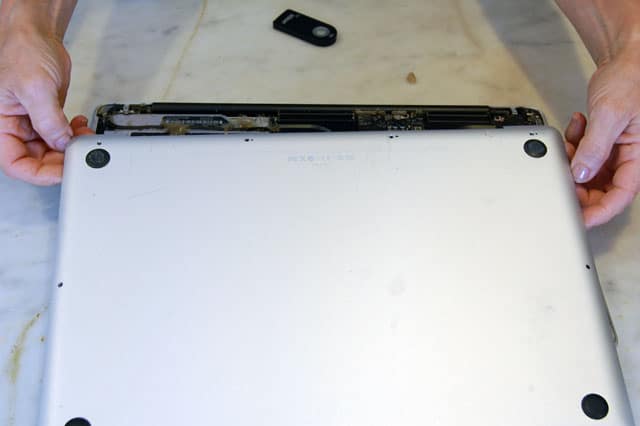 You will now be staring into the belly of your dance partner. 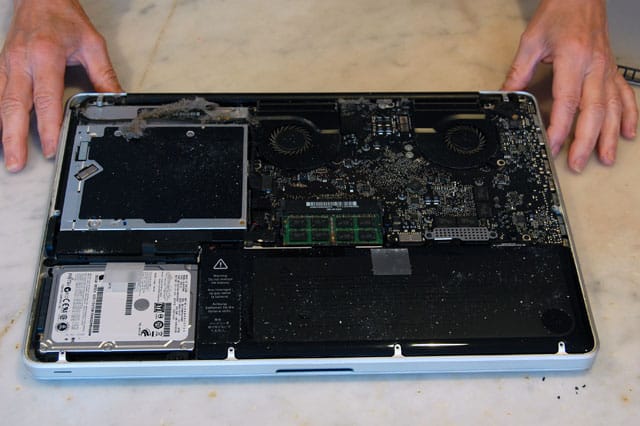 Where you are likely to find all kinds of belly button fluff.  Carefully remove it. 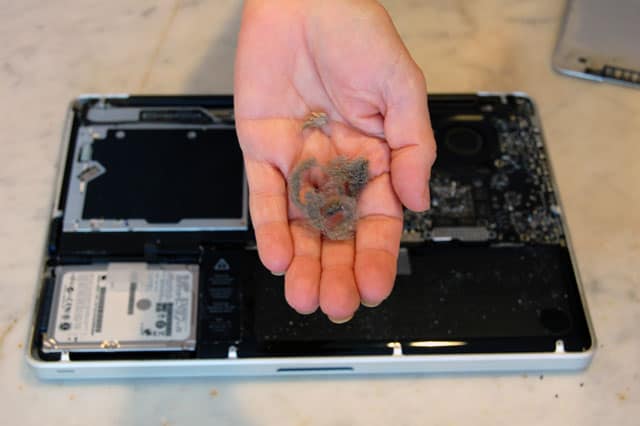 The battery in my Macbook Pro (mid 2009) version is held in with a P6 pentalobe screw.  This screwdriver came with my laptop repair kit.  If this is the screwdriver you need make sure you’re getting the right one.  It’s a 5 point star.  NOT a 6 point star, which is what most electronics stores will sell. 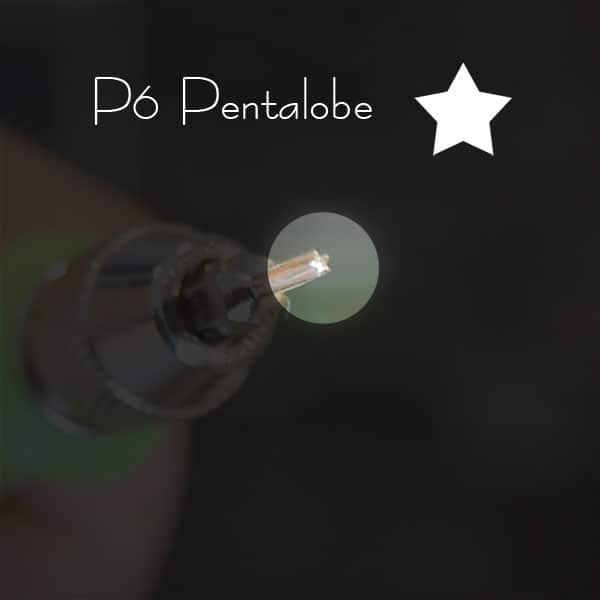 There are 3 pentalobe screws holding in your battery. Unscrew them. 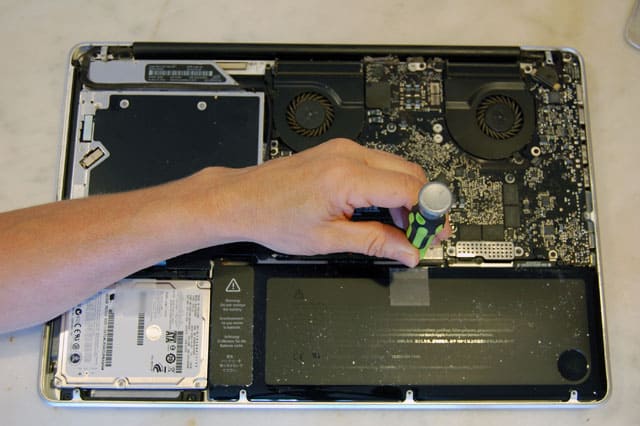 The 2 screws are very obvious and in plain sight. The last screw is hidden under a flap of a sticker warning you not to remove the battery.  I do realize the humour in that particular instruction. 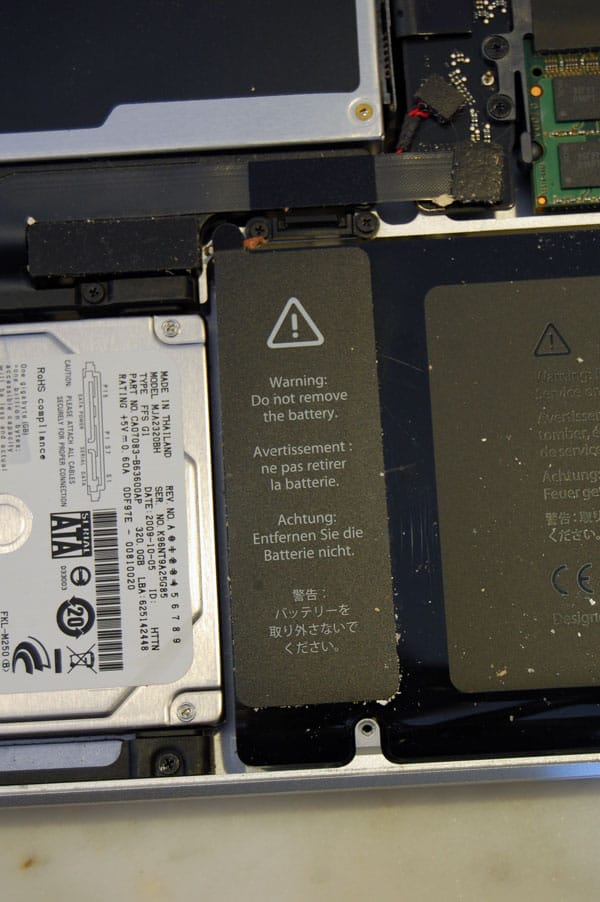 If you pull down the upper left corner of the sticker you’ll see the last screw to be removed. 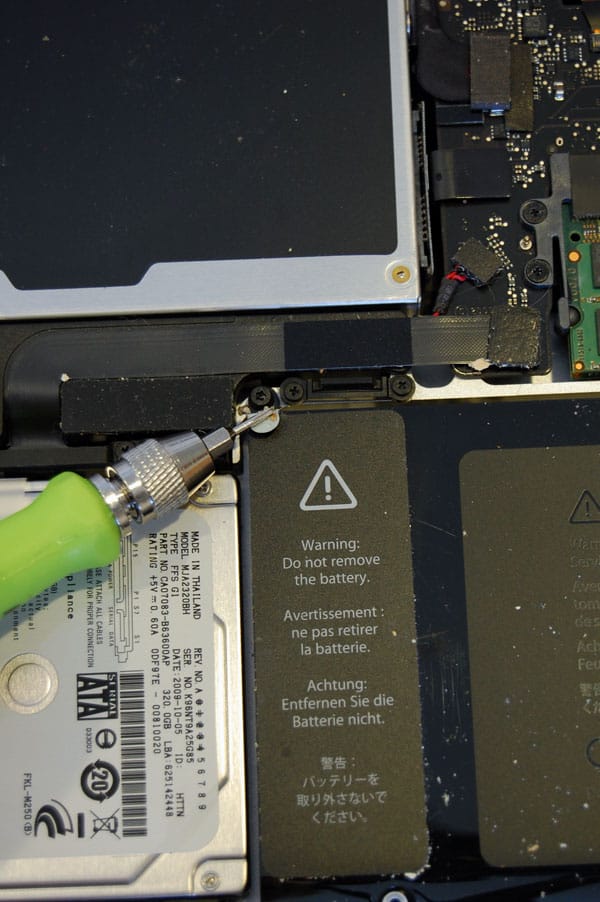 Once your screws are out, grab the plastic thing on the battery and pull it up.  Do this slowly and gently. The battery will still be connected to the computer by a plug. 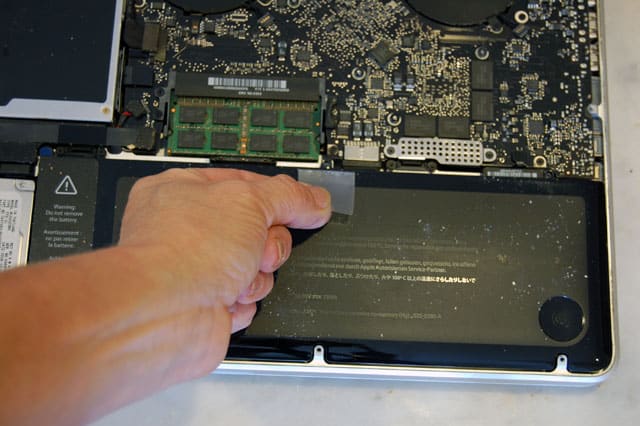 Lift the battery out just enough to see the plug. 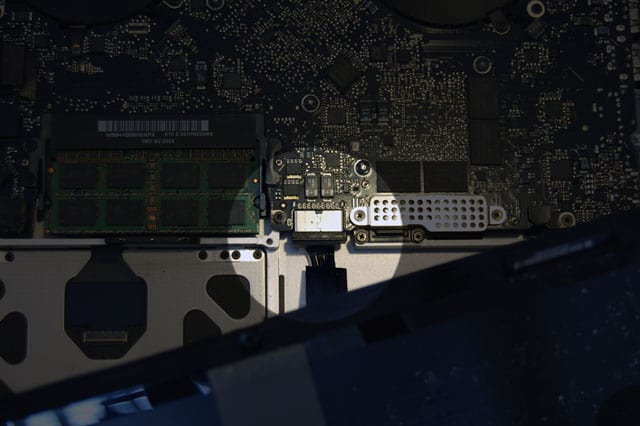 Once you have the battery pulled back enough that you can see the plug, simply ease it out of the socket and pull the whole battery out. 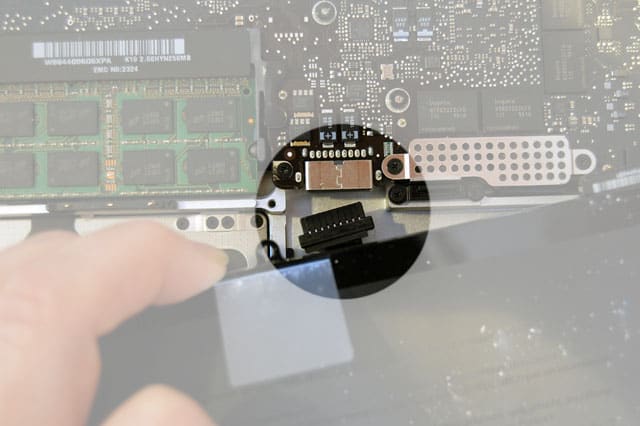 Now just insert your new, full of power, ready to dance, new battery.  Plug it into the socket. 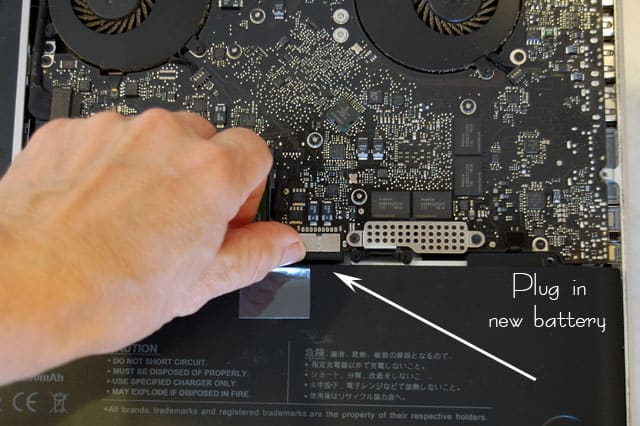 And then replace the screws you removed. 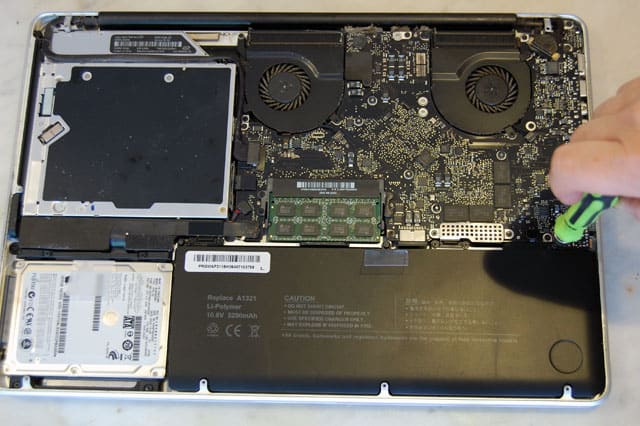 Slip the back of the computer back on. 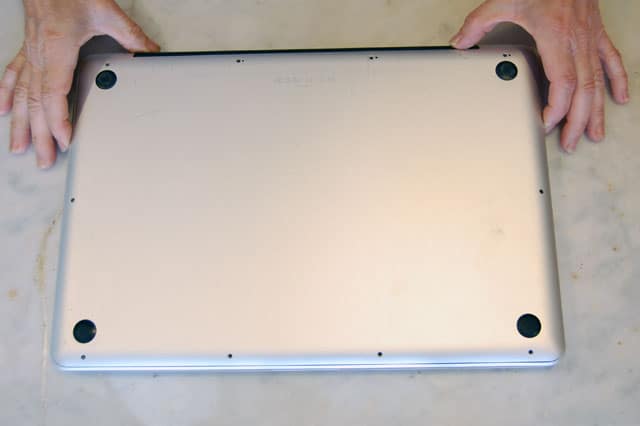 Replace all of the screws and you’re done. 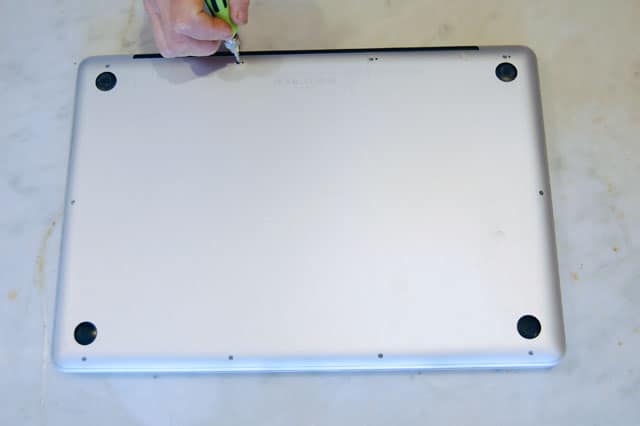