Home » My Life » My Family » Riding Elephants in Thailand. Every 80 year old’s dream.

I told you a couple of weeks ago about how when I, my mother and my two sisters went to Thailand we all tried to allow everyone else their “thing”. Whether they wanted to look at jewelry or antiques or lady boys. We all did it without complaint.

I didn’t want to ride an elephant. I wanted nothing to do with the elephants. Elephant tricks made me sad and once when I saw an elephant being forced to play with a hula hoop I cried and got mascara on my tee shirt which then made me angry.

Angry the way a free roaming, intelligent animal must feel after being held captive and forced to play with out of date toys.

And I made my objection known. I was dragged against my will to the elephant sanctuary. That’s right. It’s a sanctuary where elephants roam the jungle and surrounding river. It’s a massive jungle filled with massive, happy elephants.

But still.  I wasn’t convinced.

The sanctuary is a money making venture with the elephants working in the morning (work consists of eating bananas fed to them by visitors, taking a bath in the river with their human trainers and then giving anyone who wants a one hour ride through the jungle.

I arrived at the elephant sanctuary with my arms crossed over my chest and my lips pinched. By the time I left my arms were at my side and I was smiling. I was satisfied the animals were treated well and were happy.

I was happy, my sister Fish Pedicure Pam was happy, and Betty?  Betty had the time of her life.

Pink tool belt and I were pretty cool about it all.  Elephants?  Sure.  Ride em all the time.  Mainly through the jungle.  We usually have flying monkeys holding our capes behind us, but whatever. This is fine too. 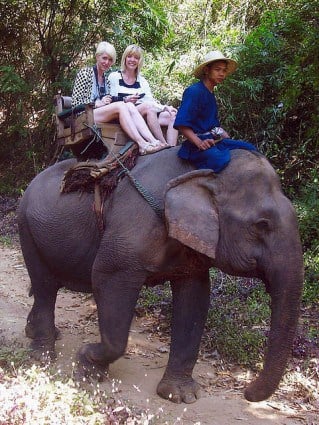 So even though my heart was in the right place, it turns out I was wrong about this particular venture and perhaps I put up a fuss for no reason.  I have no problem admitting when I’ve made a mistake.

It just goes to show you.   Things can turn out completely differently than you expect.  The elephant ride was a great adventure with a good time being had by all. 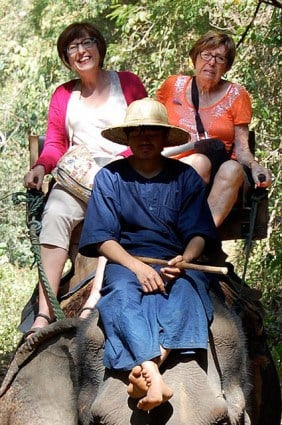 Or at least by Fish Pedicure Pam.  Remember when I said Betty had the time of her life? I didn’t say it was a good time. She was probably overreacting. She was kindda drunk. Betty was kindda drunk for most of our trip.

If you squint your eyes and focus mainly on Pam’s maniacal  smile, you barely notice the 80 year old woman crying on top of the elephant. 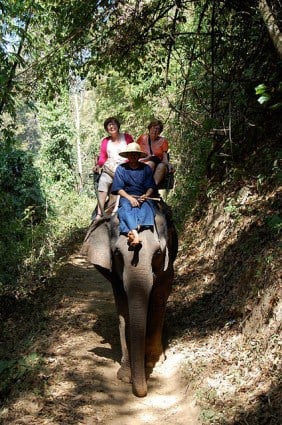 Judging by her grin, it’s possible Pam thought she was actually being gifted the elephant by the people of Thailand.  And judging by my mother’s face … she thought the same thing.