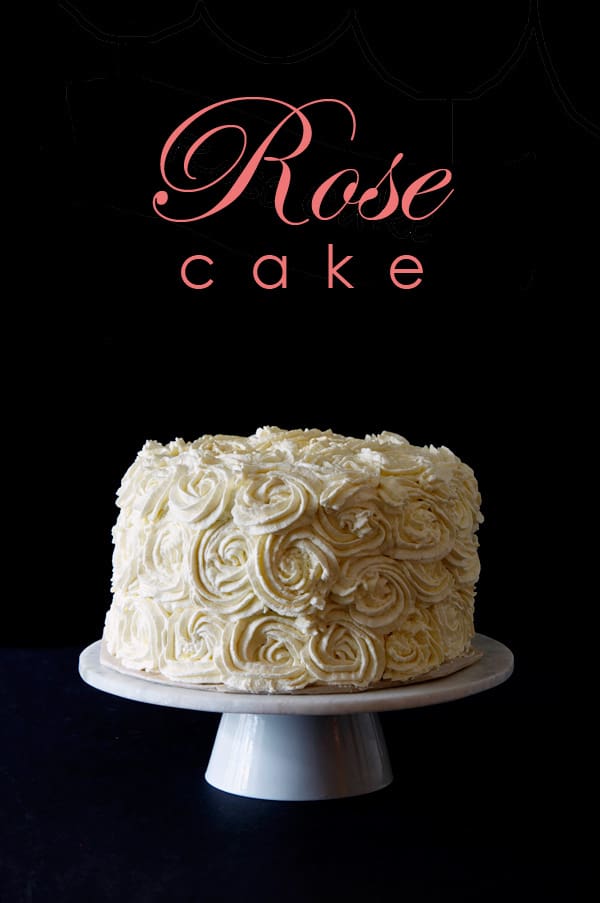 It's hard to tell from the picture but this cake was a failure.

Reader Christie mentioned in one of my Easter posts that her family ate Carrot Cake for dessert at Easter.  It was a revelation for me.  How had I not thought of this before?  I must have been thinking of other things my whole life.  Things I wrongly thought were more important. Like how to make a living, how to be a good person, how to inspire my fellow humans.  Sure these things were vaguely important but I  mean ... CARROT CAKE FOR EASTER.    How could I not make room in my brain for Easter carrot cake?  There's always room for carrot cake.

Wow.  I was such an idiot back in the olden days, 2 weeks ago.

Now that I had been enlightened I went straight to work figuring out how the hell I was going to convince my family that the standard Easter dinner we'd had for the past 25 years was gonna be changed.

Yes we'd still have Lemon Meringue pie, but the Cherry Cheese Pie was going to have to go to make room for the Carrot Cake.  My mother had inexplicably added creamed cabbage to this year's menu. So now you know my mother is 80, because making creamed cabbage is the equivalent of showing your birth certificate or wearing those massive glaucoma sunglasses.

So I broke the news of the cake the way any coward would.  Text messaging.

She was never to be heard from again that girl who called dibs.  Weird.

I'm sure she'll pop up somewhere, someday.  I'm not too worried about it.

So I got to make the cake which is a lucky thing for me because I really wanted to make the cake.  Which I did the very moment after I scrubbed and detailed my wood chipper.  That's just something I like to do every once in a while after someone angers me. 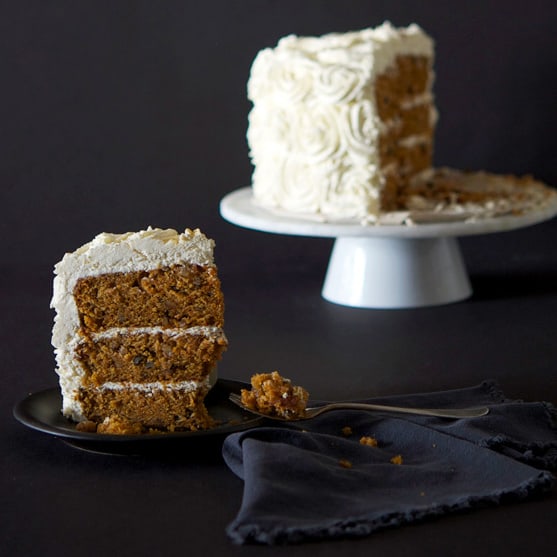 And if you don't like carrot cake you have my sympathies.  You probably like brussels sprouts.  You're a weirdo. 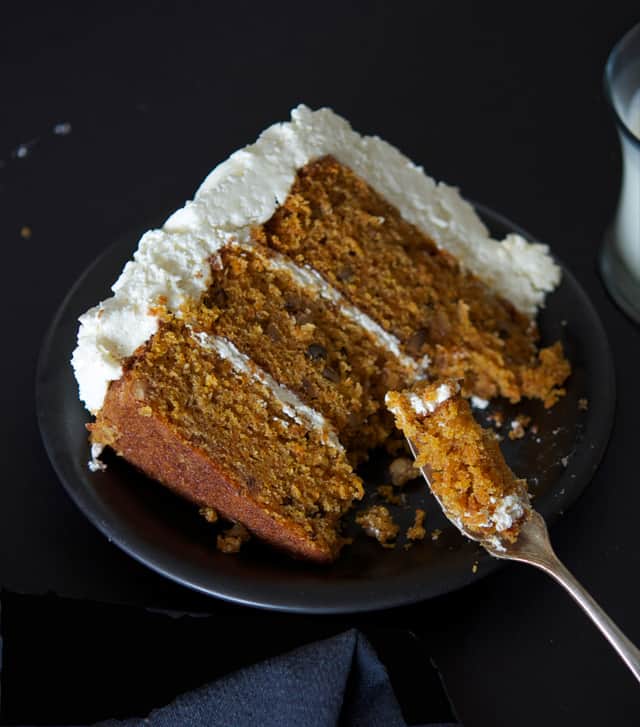 The real reason for this post isn't about the recipe anyway. It's about the frosting technique.

I'm the one who broke with tradition and introduced the carrot cake to Easter dinner so the cake had to both taste and look impressive.  Plus it couldn't contain brussels sprouts.  That was kind of important.

You've probably seen these loose roses piped on cakes everywhere from Pinterest to Wilton packaging.  I too had seen this technique and even though I'm not much of a cake decorator knew I had to try them.  I just had to. 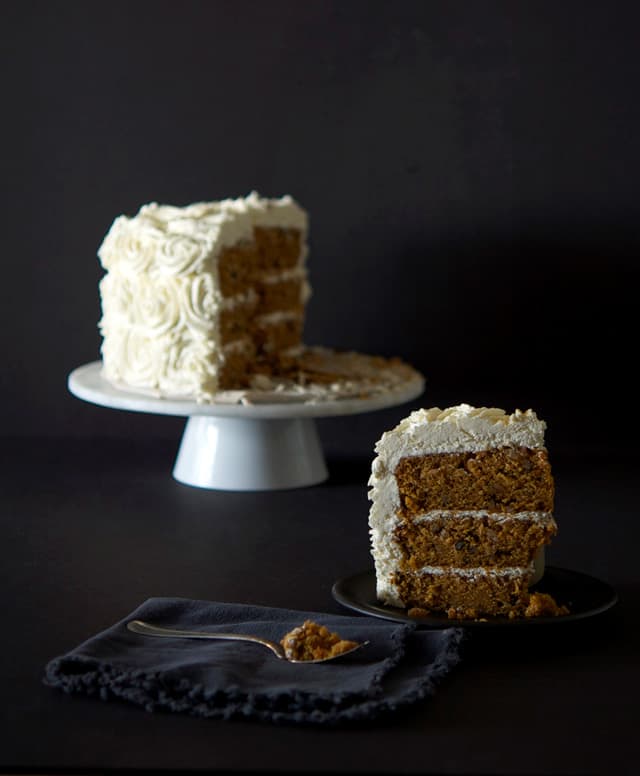 And every single thing about this cake is impressive.

First off, it's 3 layers.  A 3 layer cake is going to look impressive once you cut into it no matter what.  Just look at any food blog and they're shoving a 3 layer cake into your face.  Not literally.  That kind of shenanigans only takes place on the creepy clown blogs.

What the food bloggers don't tell you is that unless someone's getting married, buried or blessed nobody needs a 3 layer cake.  A 3 layer cake is huge.  The slices, no matter how thin you cut them, are still big enough to spill out the back of a pickup truck.  Actually, as I was putting this cake onto the flatbed to transport it to my sister's house for dinner, I wondered how much of it we would eat.

We had 13 people for Easter dinner.  Everyone had a slice of cake for dessert along with a slice of lemon meringue pie.  There was one piece of pie left.   And 75% of the cake.

So why was it a fail.ure.?  Well it wasn't really but it was one of those things that if you're the one who was making it you know what kind of a disaster it was.

You see to do this rose technique you have to have pipeable icing.  Icing you can pipe through a piping bag and will hold it's shape.  Cream cheese frosting (the holy grail, there is no other, spit and hiss at anything else) is not pipeable.  A carrot cake HAS to have cream cheese frosting.

So the hunt began for a pipeable cream cheese frosting recipe.  I went to new friend, chef Signe Langford to ask her advice.  She said SWISS MERINGUE.  You need to start with a Swiss Meringue.

So I started with a Swiss Meringue even though I've never made one before.  A Swiss Meringue is a frosting that's made by whisking egg whites and sugar in a double boiler.  It's a cooked meringue as opposed to the regular meringue you're probably used to which is just whisked eggs with a bit of sugar and vanilla.  That's called a French Meringue by the way.

That part went well.  Noooo problem on the Swiss Meringue.

Now I had to turn the Swiss Meringue into a Swiss Meringue Buttercream.  Which means you add butter to it. Not sure how much butter you'll need?  Just buy a cow and start milking.

Now I just had to add the cream cheese for the classic tangy taste. I was fully expecting another Check!  I did not get one.

This is where things start to fall apart.

The first few blobs of cream cheese were fine.  But the more I added the more things started to look like ... wrong.  They started to look really wrong.  Bottom of the garbage can wrong. Curdly.  Icky.  Like scrambled eggs.  My meringue had split.  If you're a cook and you know what that means I'll give you a moment to say a prayer for me.

So I heated up a bit of the mixture and reincorporated it into the meringue.  It fixed it.  Kind of.  But it was a bit warm so I stuck the frosting in the fridge to firm up then rewhipped it.  At which point it got even more curdled.  Off to Google.  Found 3 completely contradictory answers on how to fix it.  I tried all of them.  Plus a few more just to be safe.

It worked.  I no longer had a curdled mess.  I had a curdled, WATERY mess.  Any more mistakes and this frosting was going to be good enough to win first prize at a local fall fair.

What ended up helping was adding some warmed up meringue mixture to the mix.  I just scooped out a small bowl, heated it in the microwave for 15 seconds or so and added it back into the mixture slowly.  It helped.  Then I just let it keep mixing until it had returned to somewhat of a normal looking frosting.  I refrigerated it for 10 minutes or so and then started piping.

The actual rose piping couldn't have been easier.  COULD. NOT. HAVE. BEEN. EASIER.  So what with the point of this entire post being how you can do this frosting I should now let you know that things turned into such a shit show that I didn't take a single photograph of me doing the piping.

But that's O.K.  Because I'd rather steer you towards the woman who invented the rose frosting technique anyway.  A blogger by the name of Amanda Rettke. She runs the website I.Am.Baker.

It was her little cake tutorial in 2011 that sparked a frenzy. Wilton is now teaching the technique in their courses and the rose cake is being sold in bakeries all around the world.

She's humbled by it. I on the other hand would probably be incensed. Hopefully she's getting some sort of compensation or credit for it.

The moral of this really, really, probably unnecessarily long story?

Almost anything in life can be fixed with little hard work, some ingenuity and occasionally .... a wood chipper.