Integrating backyard chickens can be a bit unsettling for all involved. But I had to come home with this Sweetie, a beautiful black Ameraucana when I saw her.  Look at that face. Here’s how the first week went. 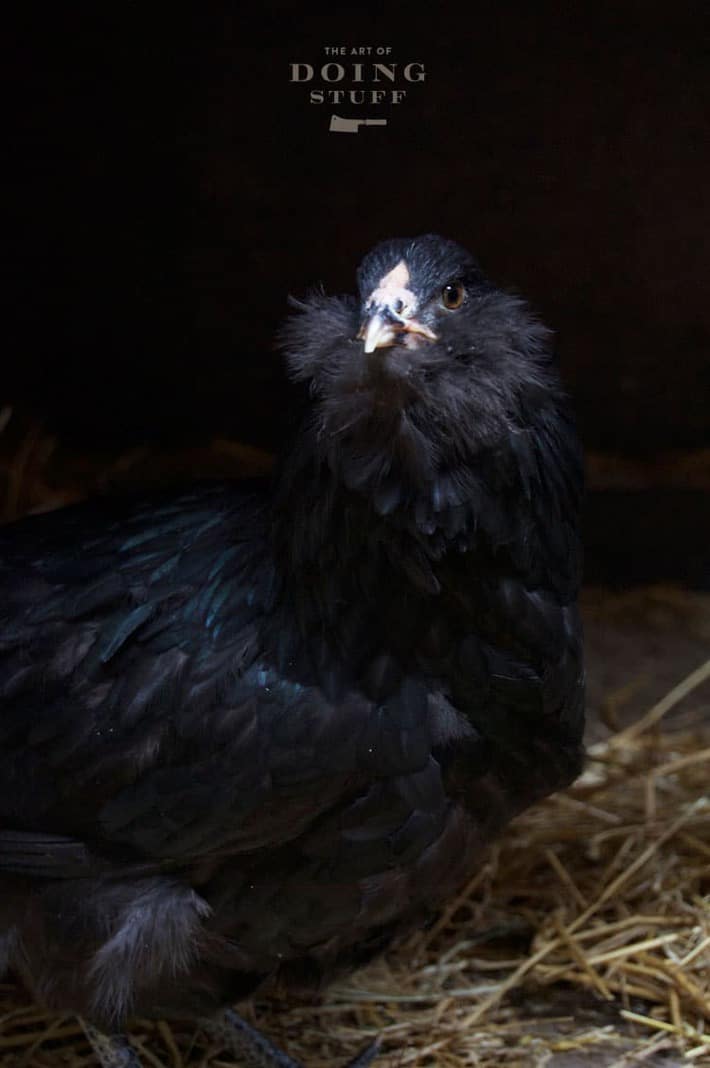 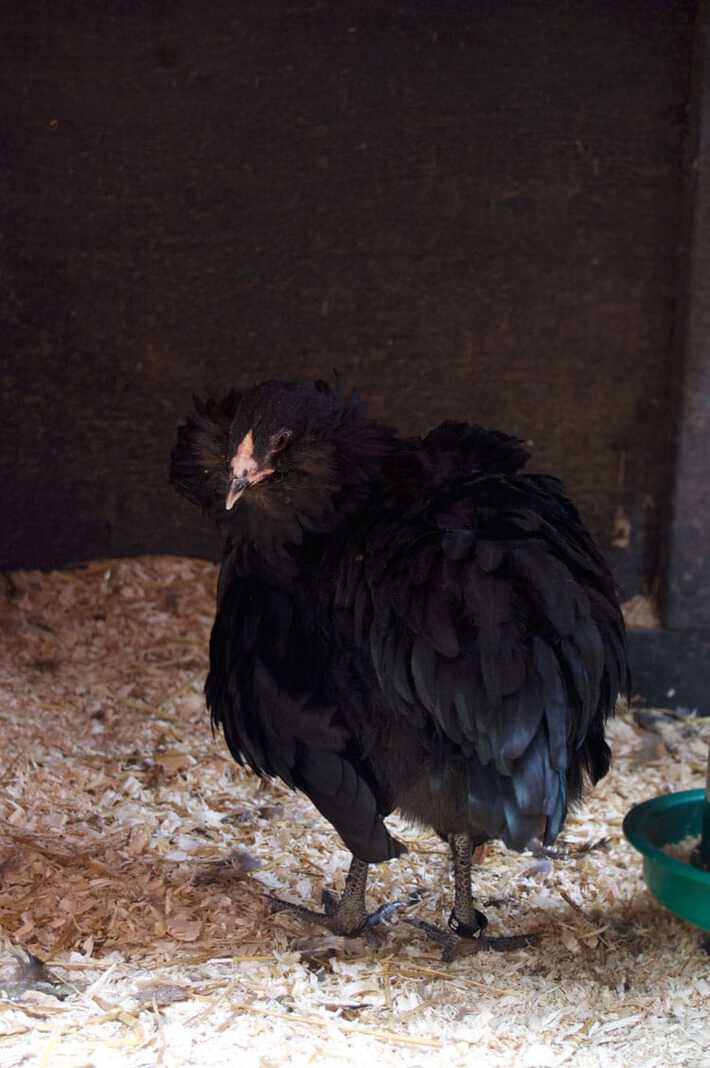 A few weeks ago when I went to pick up some fertilized eggs from chicken breeder Barb Dodington I picked up something else.  Sweetie.

And Sweetie’s been trying to kill herself ever since.  More on that in a moment. 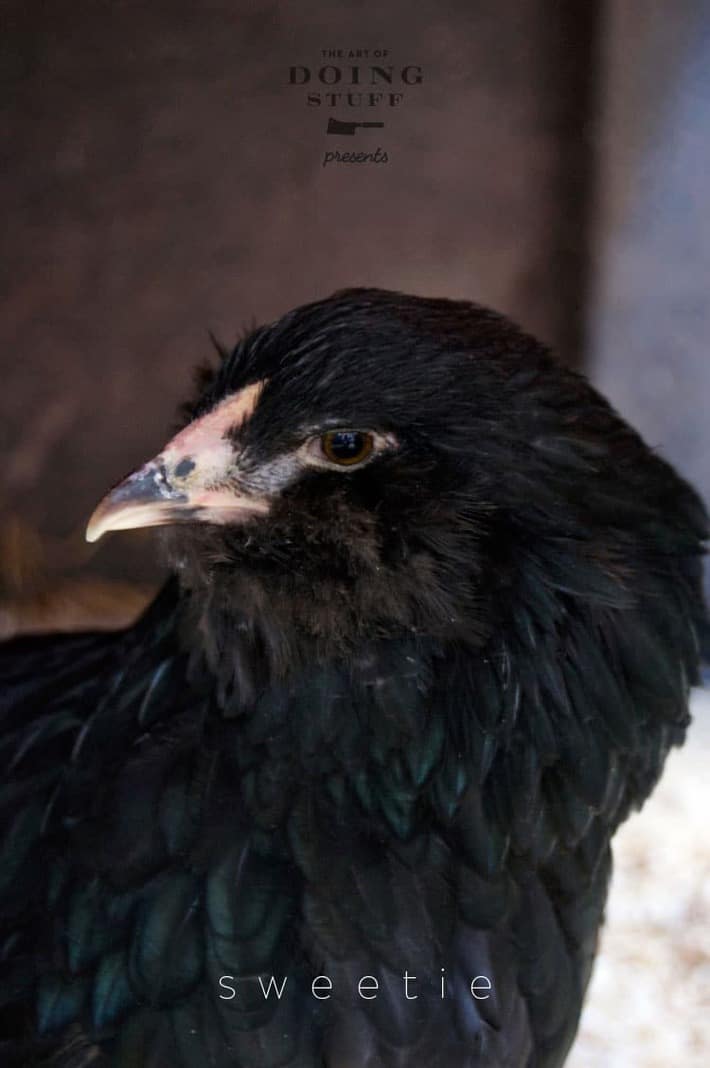 The day I went to pick up my fertilized Olive Egger eggs I had  no idea what I was walking into.  It was barn after barn of chickens.  Some of them were romping through the yard, some of them in coops, some of them in cages … all of it carefully planned out according to breeding, hatching and playing.

I suspect there was also some sort of magic going on because I had my mind pretty much made up as I drove there.  I wasn’t coming  home with a chicken. Was NOT.  Only eggs.

I came home with a chicken.

And 3 more eggs than I meant to.

As an actual farmer I’d be a total failure.  I’d keep every chick, goat, horse, cow, worm, snail, or spider born.  I would keep no centipedes.  All centipedes would die from the globally accepted form of centipede murder … a shoe to the head.  Funeral proceedings would follow, which consist of picking up the now deceased, yet still writhing centipede, with half a roll of toilet paper with your arm stretched out as far as possible in front of you while making gagging sounds and hyperventilating just a little bit as you flush it’s still jerking legs down the toilet.

The Lineage and Genes

She has a pure black grandfather that came from Tom Kernan in New Jersey, who breeds championship Ameraucanas.

Her grandfather  was Champion AOSB at the Clinton Fair in 2016. 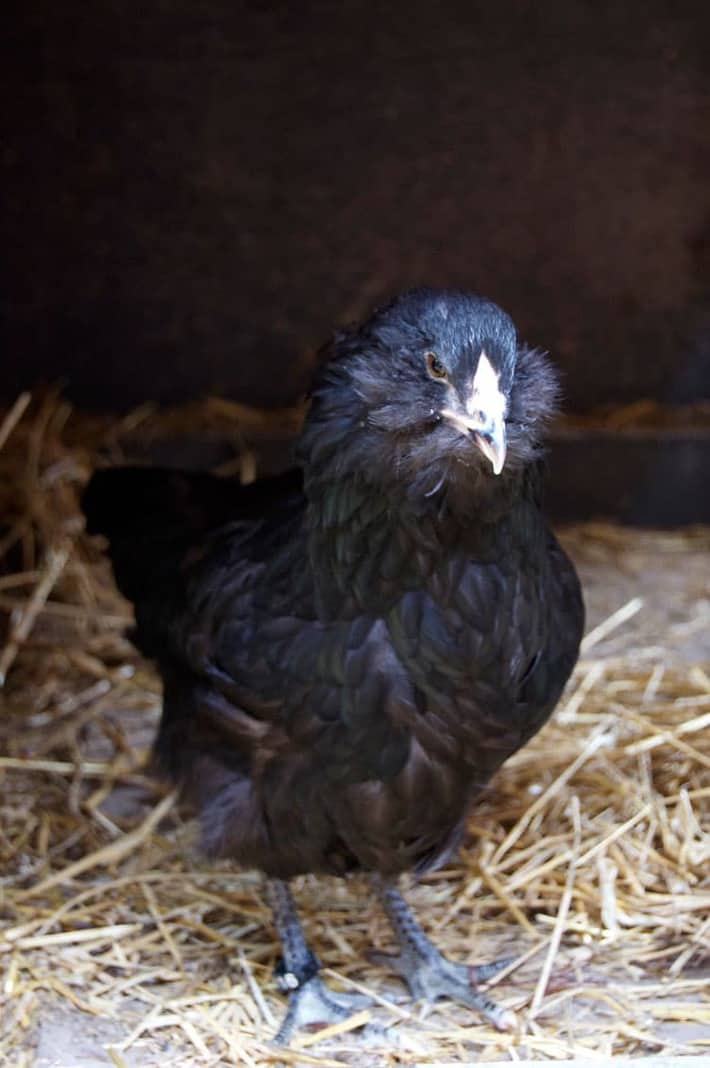 So Sweetie’s lineage is far more refined than my own. I come from the hardy stock of swingers and boozers. 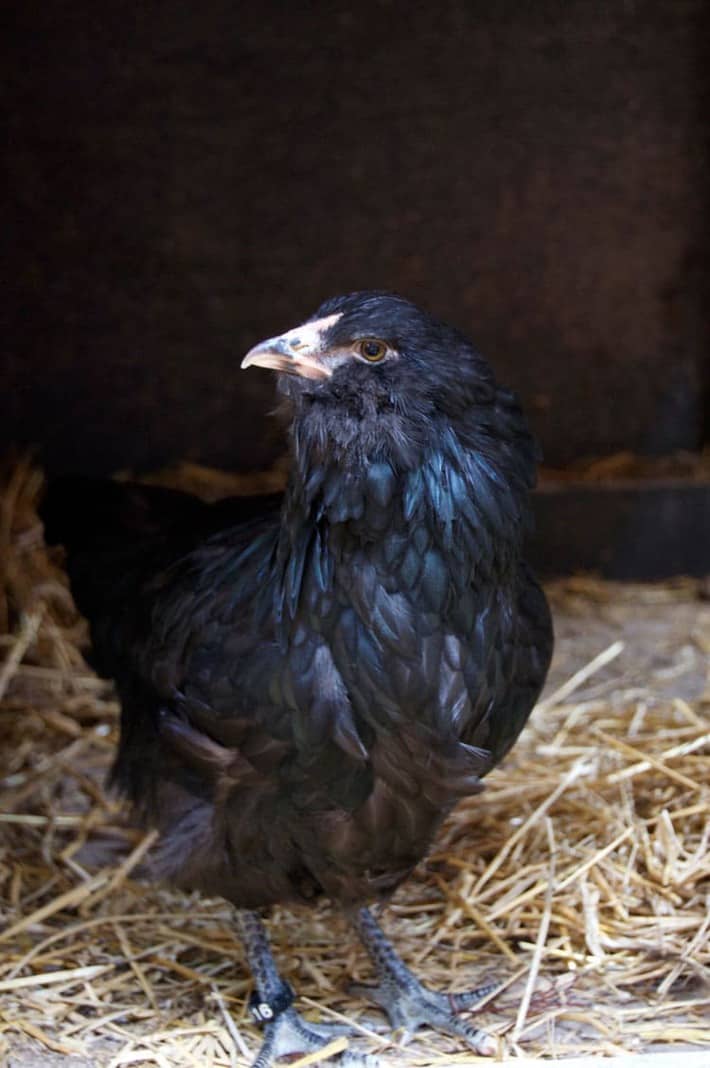 I would have come  home with a Silkie as well but luckily Barb saw me sneaking out with one on my head like a hat and told me I couldn’t have it.  Apparently they weren’t old enough, or sexed yet or for sale, or blah, blah, blah. Whatever.

So all I made it out with, was Sweetie.

And 8 fertilized eggs of course.

The eggs didn’t need to be integrated much.  Really, I just stuck them under one of my broody hens and waited for them to hatch. Which they did and became what’s commonly  known as the cutest thing in the world … baby chicks.

You can learn how to get fertilized eggs and hatch them under a broody hen here.

Sweetie however, needed to be integrated with the other chickens. 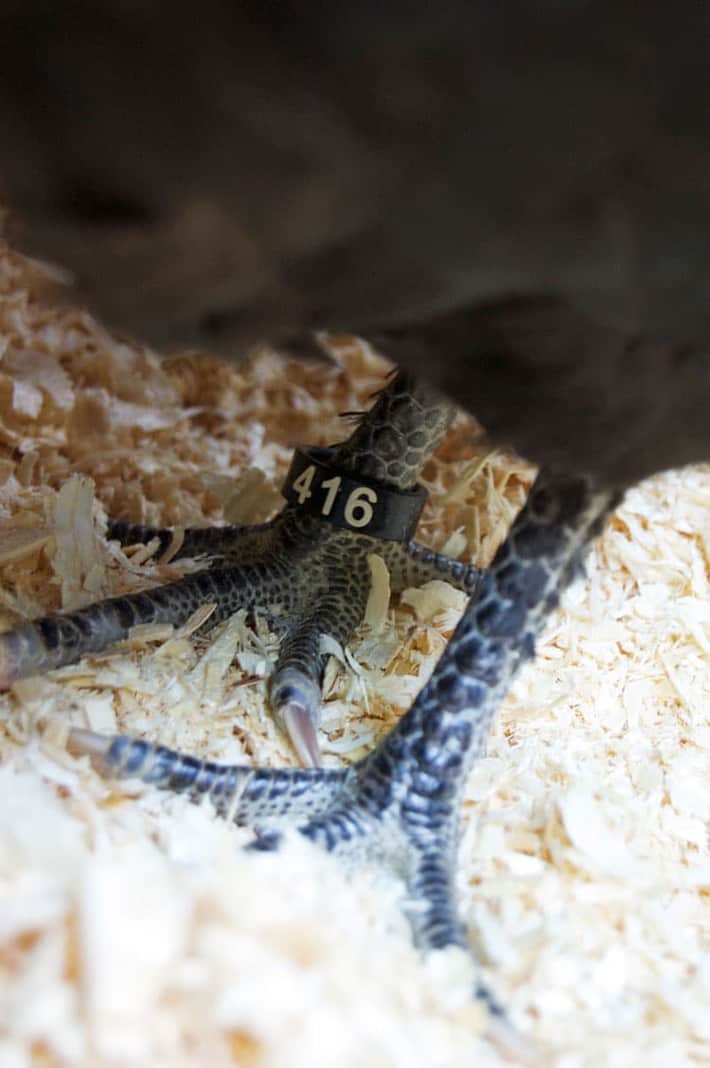 Sweetie will also be known as chicken 416 as per her ankle bracelet because she’s official.  And possibly under house arrest. 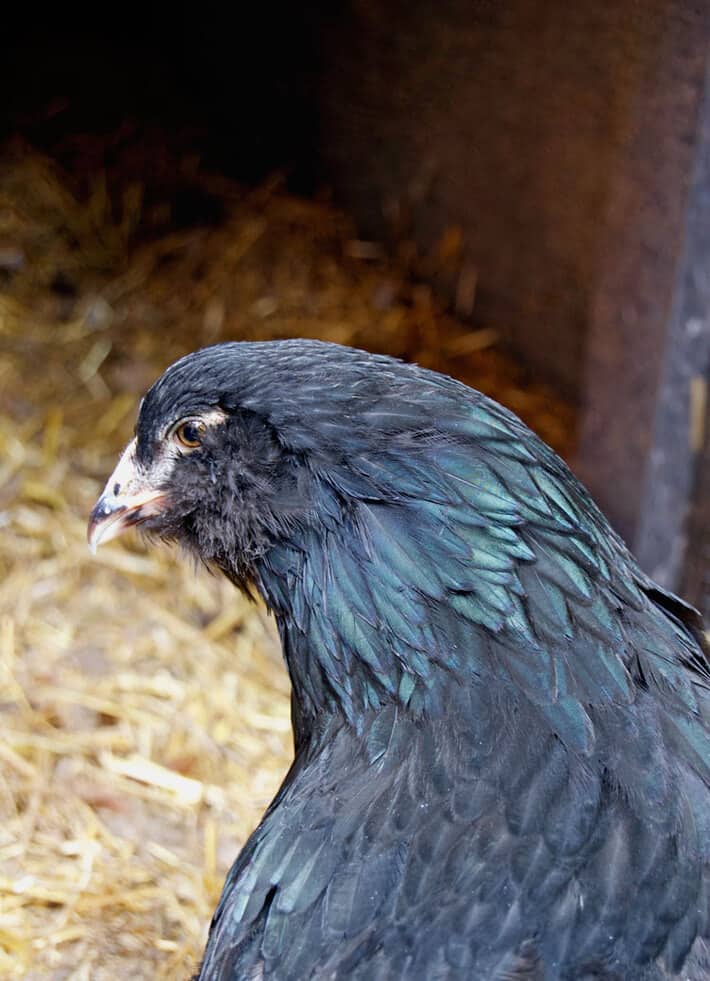 The second I got her home I knew Sweetie was the cutest thing in the world.  And like most cute things on this earth, she is made up of 25% cute, 74% rabid, freakish, devil-monster and 1% clown. 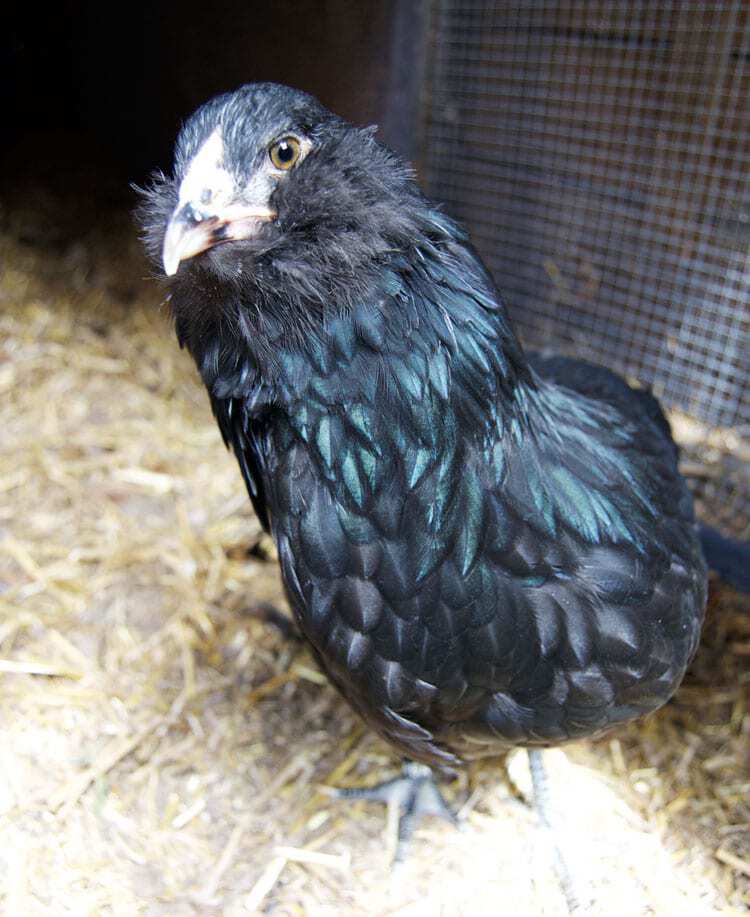 In my moment of panic I tried to heave and move the chicken coop.  The entire thing.  Like I thought I was a tractor.     So, no, that didn’t work.

Instead I had to run around looking for a pair of wire cutters to literally cut her out of the spot, stick my hand under her and let her drop into it. 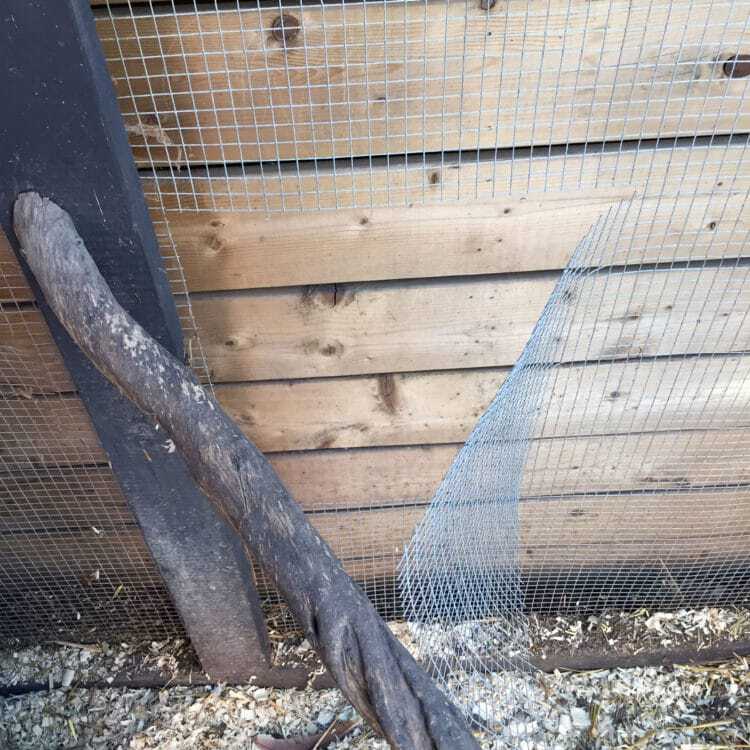 Now I have to repair that entire side of my coop so raccoons and skunks don’t get in to finish the job of killing herself that Sweetie started. 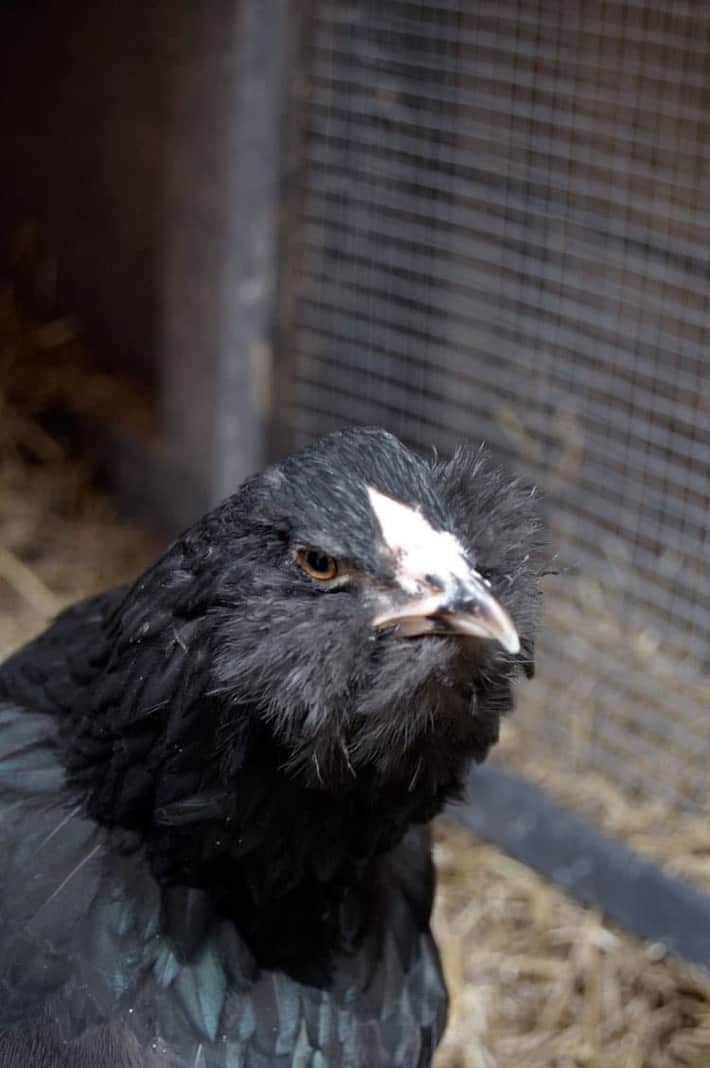 Look at her.  Just look at her.  That is the look of chicken remorse with a touch of … but look how cute I am … sucker. 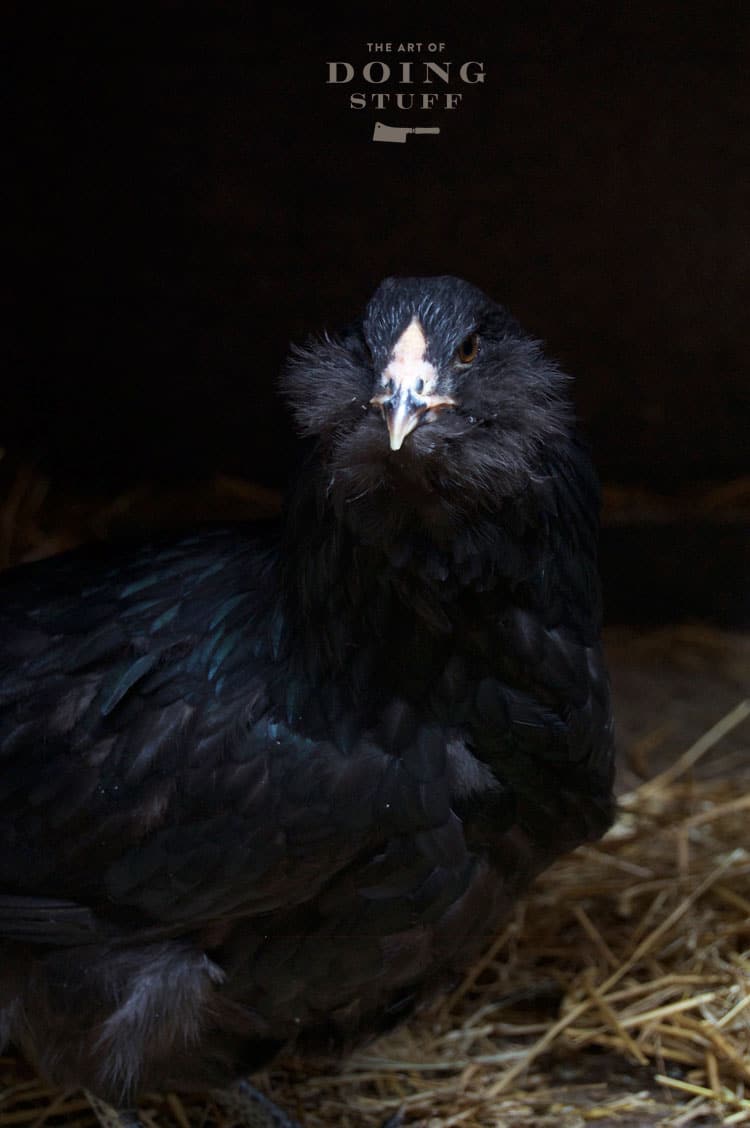 And you know what?  She’s Cuddly.

Post Update:  Sweetie has since died. Here’s how, what from, and how to spot it in one of your own chickens.

I determined what killed her by doing a necropsy, which is just another term for an autopsy. Yes it was awful to do, but if you want to know what killed your chicken and to help make sure it wasn’t something contagious, a necropsy can be a smart thing to do.