I’ve got some Thanksgiving centerpiece ideas for your table this year, (one that I made yesterday with just stuff I found in my kitchen!) Whether you’re gathering together in real life, celebrating alone or with a virtual Thanksgiving feast, make it special. Because – 2020. 🙄 Ugh.

Skip right to the ideas.

Presently many Canadians are alarmed because most of us didn’t realize Thanksgiving was in a week. Thanksgiving.  The sneakiest of all the holidays.   Now’s the time to start debating whether to get a fresh turkey or a frozen turkey and if you get a frozen turkey whether to let it defrost in the fridge or in a sink full of cold water.  If you aren’t the type to have already pre-ordered your organic turkey, you will ultimately decide to buy whatever turkey is the cheapest and the right size regardless of whether it’s frozen or fresh, so don’t waste anymore time debating.

Now is also the time to start thinking about how you’re going to set your table or what kind of centrepiece you’d like to have.  I don’t care if you’re having a simple dinner for 2 or a huge dinner party, you need to have a Thanksgiving centrepiece.  You have to.  Otherwise your table will look incomplete. Like a face with no eyebrows.

I currently have a garden filled with so many Dahlias that I know that I’ll be making a Thanksgiving centrepiece using those this year.   Looking back on some of the centerpieces I’ve done I’ve discovered two things about myself.  A) I really like ornamental cabbages and b) I’m REALLY glad I painted my brick wall.

Which leads me into my next statement; last year I proclaimed I was going to refinish my dining room table before Thanksgiving because I haven’t liked the finish since the guy who built it walked it through my front door.  Now that my courage is sufficiently fed after painting the orange brick wall and refinishing my orange pine floors so they don’t have orange in them anymore, I think I can tackle the orange dining room table without fear of any post traumatic episodes.  If I down a glass of whiskey beforehand I might even think it’s fun.

You can copy these ideas exactly as is, or you can just use them for inspiration.  In case you were worried there were rules to this post and I was going to knock on your door Thanksgiving evening asking to inspect your centrepiece, I am not.  Do whatever you want, I will not judge.  Mainly because I won’t be able to actually see it.

My favourite. The best centerpiece I’ve ever done.  I might even do something like it again this year.

This all-vegetable arrangement is my absolute favourite arrangement of all time.  I made it a couple of years ago when I was doing a talk for Lee Valley on Thanksgiving decorating.  I wanted to make something that truly represented a Canadian Thanksgiving that honours the harvest.

If you have cake stands of different sizes you can stack them like this and they’d work really well too instead of buying new stands.

TOO MUCH? Simplify it.

You can make a MUCH simpler edible arrangement with just chard, kale, beet greens, dill and parsley.  Whatever you can find in your garden or grocery store. Or fridge!

Either way I really, really like  using vegetables and edibles for the Thanksgiving table.

In my kitchen I had some apples, dried hot peppers, black popcorn I grew and some sprigs of rye. I also grabbed an antler that was in my living room and stuck it in. I also ran to the garden and found a dill head to balance out the green in the apples.

Nope. You probably don’t have the same things in your kitchen as I do but if you look you’ll find stuff that’ll work for a fast centerpiece.

Big, BOLD, over the top centerpieces.

A year or two before I used many of the same flowering elements like Amaranth and ornamental cabbage to make a HUGE free flowing centrepiece.  It’s another favourite but there’s a real trick to making something that’s so messy look pleasing.

Basically you have to make a tidy mess if that makes sense.  Using a pre-defined  colour palette (for me it was purple, green and red) and keeping the arrangement quite compact will make your job arranging this kind of centerpiece easier.  See what the entire table looked like in this post. The rustic, casual table setting remains my favourite tablescape to date.  LOOK there isn’t even a tablecloth or placemats.  It’s mayhem I tell you.  And I like it.

Like ornamental cabbages but don’t trust yourself to do some huge, over the top arrangement? I don’t blame you.  Even I get myself into a sweat doing them.

Make it easy on yourself and just put a row of cabbages down your table.  Either straight in a line or mixed up a bit like these.

Yes it looks a bit anemic at the moment, but that’s only because the table isn’t set. Once you have that done the cabbages will stand out and look beautiful.

Jugs of Flowers for the Thanksgiving Table

Whether it’s a row of them or just one really nice one, a jug filled with flowers always looks good plus it as easy as cutting the flower stems and putting them in a jug.

In my part of Canada, Southern Ontario,  Amaranth and Dahlias are usually still blooming so they make a perfect fall feeling centrepiece especially in colours normally associated with autumn and Thanksgiving – rust, brown and orange. But to offset the drabness that might come with those colours, use something shiney or metallic to offset it.

If you’re in America, where Thanksgiving comes a month later you can still find seasonal mums to fill your jugs with.

For jugs with flowers to look good you don’t want to see any stem. Or at least not much. So make sure some of your flowers are level with the rim of the container.

(as seen above too)

Foam pumpkins for the win.  I got mine at Michaels when they were on sale because NO ONE of sound mind and body buys anything regular price at Michaels.   Just add a few candles in cheap glass vases and some preserved moss for a beautiful Thanksgiving tablescape that’s  reusable from year to year.

I know a lot of people don’t like to spend money on flowers because they last a week tops.  With foam pumpkins and preserved moss (this is how you can preserve your own moss) you can stick everything in a Tupperware bin and pull it out year after year.

Some of my favourite stuff you’d typically associate with Thanksgiving or just looks Thanksgivingy to get your mind whirling around what you can do yourself this year.

Don’t worry if you don’t have enough plates that match. Or cutlery. Or chairs. As long as there is one thing that’s consistent on the table (in this case the individual table runners) it will all look nice together.

So there will be all NEW and different fights this night.

I almost forgot the most important distinction between Canadian and American Thanksgiving; Canadians do NOT put marshmallows on their casseroles.  The thought of such a concoction is revolting.  Marshmallows only go where they belong.  In a salad. 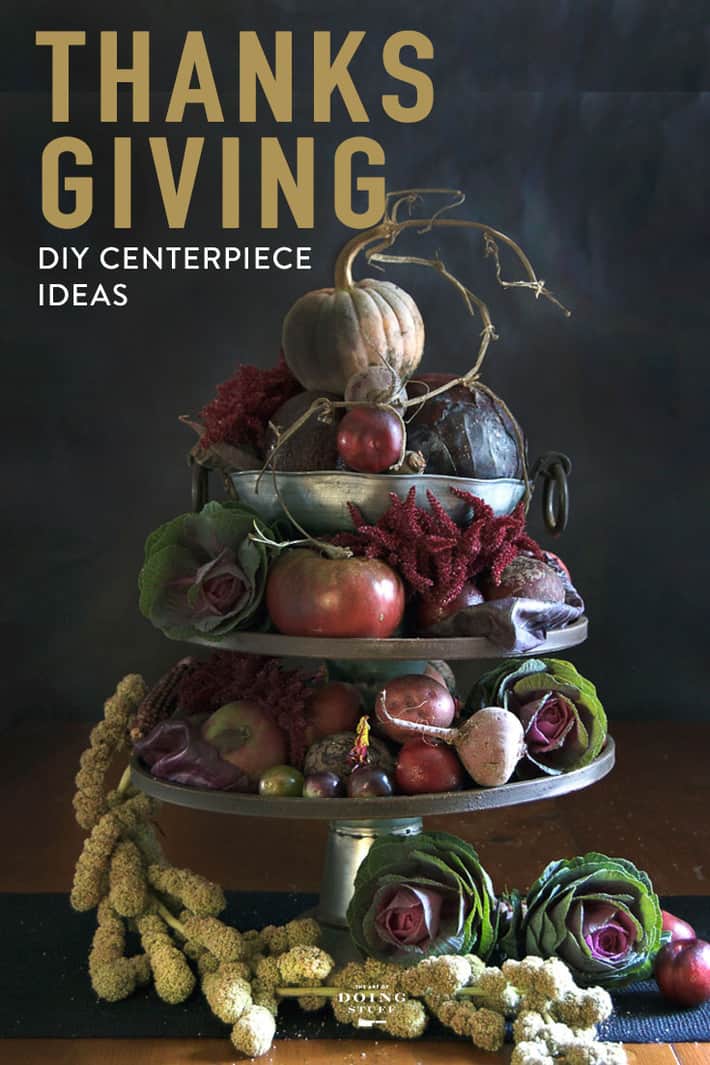