Since it’s January and since he’s been acting crotchety lately, I thought now would be a good time to hit up the fella’s father for his list of true soups.   I recognized he was particularly crotchety on Christmas Eve when Santa entered through the front door, all the kids gathered around stunned and gasping, and the fella’s father grunted that Santa’s beard was fake and he smelled of rye and ginger.

A crotchety fella’s father makes for a much more entertaining list.  As luck would have it, he’s still crotchety.  Last week I asked him to email me a list of the true soups.  Here’s the list. 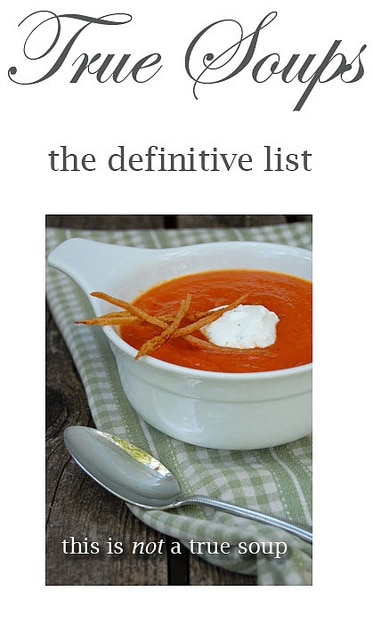 “There are four true soups and one honourary true soup. All other soups are unworthy pretenders.”

“Soup served cold and dolled up with a fancy name like gazpacho is not soup.  It is a mess in a bowl.  The boy will agree with me on this, I know.

Mushroom soup is not soup. It is a misuse of mushrooms. Their place is not in soup but on a plate, fried beside the steak.

No soup should contain broccoli, ever.

If everyone followed these simple guidelines the world would be a better place.

*Habitant is a brand of Canadian soup.   Their canned yellow pea soup is iconic.