Home » My Life » Random Stuff » The Art of Doing Stuff bookmarks are IN!

The Art of Doing Stuff bookmarks are IN!

I mentioned a while ago that I was going to be speaking at the Niagara Falls Seedy Saturday on February 9th. I hate public speaking so you should come out and see me at my most uncomfortable.

That’s only partially true. I used to hate it when I was in television (more so than I am now) and I’d get invited to speak at events I had no interest in. I refused most of them and the few I accepted were always completely unfulfilling. THIS however, is going to be different.

Because I love talking about seeds and growing vegetables and all that crap. So in truth I’m looking forward to speaking at this event.

I’m doing this talk as a favour to Linda Crago from Tree & Twig Heirloom farm.  I did a post last summer featuring her farm.

Having a blog is one thing.  Realizing that a blog is a business is another.  And if you have one, take every opportunity possible to let people know about it.

First I thought of having pamphlets made up with the planting dates for Zone 6 on them.  But people throw pamphlets away.  Then I thought of  having Art of Doing Stuff tee shirts.  Way too expensive, way too much work,  and … well … kind of a stupid idea.   To my credit, it was fleeting that one.

Then it hit me.  Bookmarks!  It’s something people use every day (if they’re readers), something they’re less likely to throw out, and I could design them and have them printed fairly quickly.

So bookmarks it was! 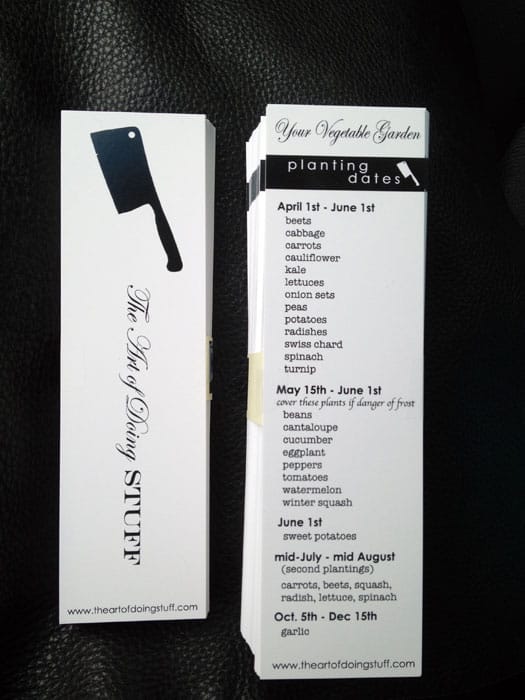 I picked these up a few days ago.  One set of bookmarks simply has The Art of Doing Stuff on the front and is blank on the back.

The other set has The Art of Doing Stuff on the front and the Zone 6 planting dates on the back.  Of course planting dates vary wildly each year so it’s a general reminder as to when to get your ass in gear.

Now I realize that a lot, most in fact, of you can’t make it to the Seedy Saturday Event in Niagara Falls.  SO … 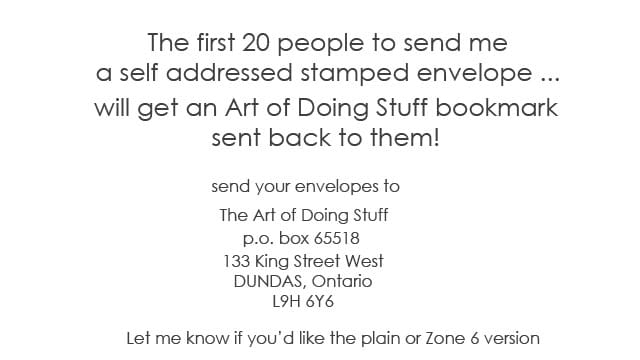 So I’m categorizing the envelopes into Canada, USA, and the rest of the world.

5 bookmarks for Canada, 10 for the USA and 5 for the rest of the world.

Once I get the  20 entries in, I’ll announce it here and on my Facebook page so the rest of you don’t lose too many stamps.  I *will* keep the extra envelopes on file and you *may* randomly receive a bookmark in the future!

Note: I’m just now realizing my stupidity. (since you all pointed it out) I won’t be able to mail with stamps other than those from Canada. So, those of you in other countries just send me a self-addressed envelope and I’ll stamp it, and send you the bookmark. If you’re wondering … the reason I’m having you send me the envelope is so only people who really want a bookmark get one.