Home » Tips » Blogging » The Art of Doing Stuff is GROWING.Read about the changes coming up!

The Art of Doing Stuff is GROWING.
Read about the changes coming up!

Everyone calm down.  They’re good changes. It’s not like becoming a woman in the middle of gym class or going gluten free.

I started The Art of Doing Stuff 4 years ago knowing that blogging had everything I loved.  Writing, photography (which I had NO idea how to do, but was always curious about), a bit of business and the ability to work at 2 a.m. if I wanted.  As it turns out, I did a lot of blogging at 2 a.m., not always because that’s what I wanted.

Blogging is easily the hardest, most time consuming job I’ve ever had, and that’s coming from a woman who was a television host for over 15 years.  I know. Television doesn’t sound all that strenuous, but when you’re shooting, work days are generally between 15 and 18 hours long, for weeks on end, plus you’re the only one on set with the added pressure of having to have good hair the whole time.

But blogging is also the most FUN.  At this point I can’t imagine doing anything else.  So it’s with great sadness I tell you that The Art of Doing Stuff is coming to an end.

See, I told you that because now whatever I tell you will seem like a relief!    The only problem is there’s a slight chance  you choked on your coffee and coughed so hard an eyeball popped out.  So now you hate me.  Sorry ’bout that.

There are a few changes coming up for my website.  Nothing earth shattering, but there are enough changes coming that I figured I should let you in on them so you aren’t alarmed or startled when they come about.

Something I’m working on right now is a complete redesign of my website.   Most blogs that are as old as mine are on their 2nd or 3rd redesign.  I, on the other hand, am still on my first design, which was chicken scratched with crayons on to the back of a soup can label.  I generally like the design of my site but I’m finding that it isn’t structured in such a way to encourage people to really click around and read other posts.  And if you’re a blogger, that’s kind of essential.

I also would like a newer look.  Maybe incorporate the word SASSAFRASS!!!   and a dancing frog.

And finally everything, every single one of my posts needs to be recategorized.  When I first started this site I had no idea what my categories should be because I only had a general idea of what I was going to be writing about.  For instance, when I started this site I didn’t have chickens so there isn’t a category for chickens.  My goal is to have 5 categories at the top of my site with a drop down menu, with sub categories.  So if you’re looking for a recipe, you can click on “Recipes”, then the drop down menu will give you the choice between soups, salads, doughs, etc.

I’m only in the beginning stages of redesigning my site (O.K. all I’ve really done is browse around other sites seeing what I like while eating potato chips), so it’ll be quite a while before you see the new look.

A few months ago I was approached by a literary agent from Brooklyn.  I’ve been approached by publishers about writing a book before could never bring myself to commit to it.  Maria, my agent, has convinced me that it can be done.  She’s with a very reputable agency and has assured me she’ll help me every step of the way.

At least I’ve committed to the possibility of writing a book.  I’m only at the proposal writing stage, which means no one has even agreed to publish my book yet, but Maria and I are both fairly confident someone will.  Unless of course they read this post, which is turning out to be incredibly boring and dry and not something I’d be even remotely interested in if I was a book publisher.  They’d be smarter to read my post on The Diva Cup.

Anyone who’s a regular reader knows I gave a week long, live, video course on Turning Your Blog into a Business (Which is now available for you to download!).  I had SO much fun doing that course.  LOVED it!   If blogging is my dream job, TEACHING about blogging through my old friend video, is my wet dream job.

The video course let me e-meet a lot of you, actually interact a bit with you, teach, entertain and return to my roots as a television  host.

So, I’m working together with Cassie, the same girl who I worked with on the blogging course, to bring you Video Craft Night!

The goal for Video Craft Night is to have a live, video craft night with you once a month.  We’ll all hang around in my kitchen doing either one of my famous Halloween crafts, or a great recipe, or maybe try out something I’ve seen on Pinterest  and liked!  Before the course starts you’ll be emailed a list of all the ingredients or materials you’ll need.  It’ll be something that can be done in the half hour or hour long the class is.

We’re still working on it, but what I’d really like is to be able to see you as well as you seeing me.  So if you’re doing something right or wrong I can tell you.  Of course if you don’t want to be live on video you don’t have to be.

If there’s a project I’ve done you’d love to have as one of our craft nights let me know!  The first craft night will be a bit of a crap shoot, lol, so there will be a very, VERY low introductory price because well … it might be a shit show.  Which has all kinds of fun potential as well.

Between the site redesign, writing the book proposal and the video courses I’m hoping I’ll still have time for my next goal for The Art of Doing Stuff, which is putting out my weekly newsletter on a weekly basis as opposed to the once a season basis I’m currently struggling with.

I really like doing the newsletter because I include some stuff that’s happening around here that I don’t put on the blog.  Little fun things like what I’m reading, watching, wanting and listening to.  Plus I remind you about some of the best posts from the past week or two in case you missed them. 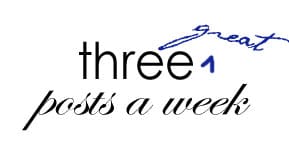 And finally, The Art of Doing Stuff will be going down to 3 posts a week instead of 5.  They will be every Monday, Wednesday and Friday.

Why 3 and not 5?  The biggest reason is so I can do a better job on each post.

As it turns out, I’ve recently learned that none of the other blogs my size post 5 days a week.  They post 3 days a week and promote their sites and do all the other work they need to do on the remaining days.  Because doing 5 posts a week would be impossible for any but the most sleep deprived of individuals.  Did I mention I gave up foods that require chewing about a year ago?

And if the larger blogs DO post  5 days a week they either have contributors, assistants or more than one person working on them. Or a hefty supply of speedballs.

I’d rather do fewer posts  and be prouder of them.  You know, spend more than half an hour writing them for instance.  A girl’s never gonna win a Oscar with a post that’s written in half an hour.  That’s my excuse for not winning an Oscar anyway.

Just writing the posts takes up every hour of every waking day.  I never get weekends off, and rarely even get a day off every couple of weeks.  A lot of times I’ll go months without a day off.  Ask my family.  They’ll confirm it.  I don’t really mind because I love my job, but I need a bit of breathing space to come up with great ideas for the site.

Also, one of the most important things about having a blog is PROMOTING it.  Just ask the people who took my course. A whole class was spent on the importance of promoting your site.  If you aren’t promoting your blog constantly, people won’t be reading it.  When I first started The Art of Doing Stuff I spent at least 2 days a week and most nights finding ways to promote my blog and get the word out.  I haven’t had time to do that for a couple of years now, because as the site grew I ended up with more responsibilities. Things like dealing with advertisers, and getting sponsorships.  The blog has given me many writing opportunities for magazines and companies like Canadian Living and Lee Valley that also take time.

So from here on in, The Art of Doing Stuff will only be coming to your inbox 3 times a week instead of 5, but you’ll also be getting the newsletter once a week (eventually) and you have video courses and a real live BOOK to look forward to!  I’ve really overused the exclamation point in this post but I’m trying to work everyone into an “ISN’T THIS FUN!!!” frenzy.

So those are the changes that will be coming up in the next few months (except posting 3 days a week which takes effect immediately).  It’s all in an effort to help The Art of Doing Stuff grow and become better.  It will give me time to expand the site and give me more time to focus on the business of it as well as the creative part.

You don’t have to do a thing differently.  Except maybe sign up for my courses if you wanna. And buy my book.  And read my newsletter.  O.K. this is really going to be a bit of an ordeal for you now that I think about it.

Just keep doing your part.  And my readers you do have a part.  I’ve heard over and over again from advisors, experts and consultants that The Art of Doing Stuff has the most engaged readers they’ve ever come across.  You’re invested in my little site and I understand that. So I’m not changing things too radically.  Not radically at all, really.

That is all.  Don’t forget to let me know what sort of inexpensive video courses you’d be interested in.  They’d range between let’s say … $10 and $50 depending on how many nights they are.  Let the commenting begin!  (this oughtta be good, lol)