I cannot do this anymore.

I can’t keep the house, make dinner, author a blog, complain about the state of my fingernails and build a Frank Lloyd Wright worthy chicken coop all at the same time.

If this coop is ever going to get built I have to devote all of my time to it.  Which means … prepare yourselves … no more posts.

Until this chicken coop is done, I’m going to have something a little different for you.

I couldn’t leave you with nothing, so I have for you,

From now until this coop is done, or at least done to the point that the thought of it isn’t giving me hives, I will have a live video camera in my backyard that you can watch at any time you want.

Honest to God.  You heard me right.

The Art of Doing Stuff is going live.

It’ll be just like that National Geographic Africa Cam where you can watch a big pond, waiting for lions and elephants to come and drink out of it.

Which  brings me to my next point …

Because this is a working atmosphere there may be times where you don’t see me.  You’ll be looking at an empty backyard.  It’s at those times that I’m either at the lumberyard getting more supplies or curled up in a ball where the camera can’t see me taking a nap.

I need naps now.  I’m getting burnt out.  So burnt out that I was careless yesterday and nearly cut my finger off on a piece of drip edge.  It was that occurrence that led me to finally make the decision to slow down, to stop trying to do everything and focus on getting these chickens in their coop. 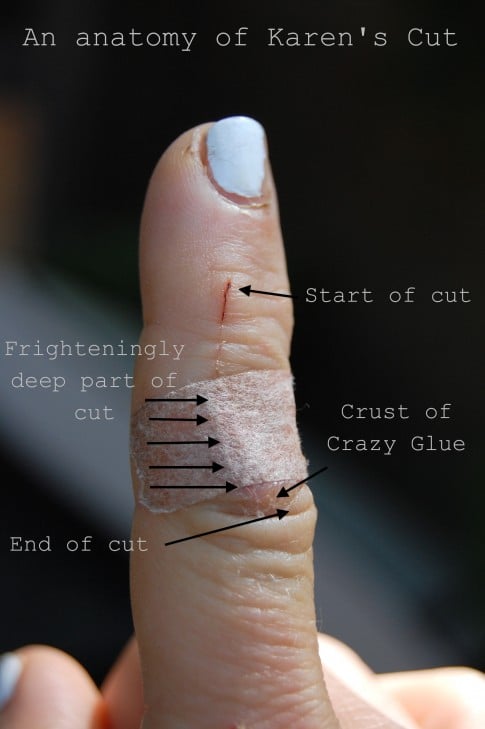 That’s right.  Crazy Glue.  My boyfriend who has more experience with stitches than anyone I know glued me back up.  I couldn’t look at my cut because I knew it was bad.   I cut myself, clenchend my other hand around my finger, ran in the house and begged for help.  He was in the shower at the time.  He was as calm as could be.  Probably because it wasn’t his finger handing on by a thread.  He assessed the damage, made sure I could still move it and decided that at the hospital they’d just tape it closed anyway, so I might as well let him do it.

It was a Saturday afternoon when every other knob doing home improvement stuff would be filling up the ER, so I agreed to let him take care of it.  After a thorough (too thorough if you ask me) cleaning, he had me bend my finger as tightly as I could and then he stuck my skin together with Crazy Glue.  After the glue dried, he taped it together with stitch tape for good measure.

I should say I’ve only hurt myself doing home improvements twice and BOTH times it was from working with metal.  Very, VERY dangerous.

Back to the coop cam information!

I will be checking your comments and answering questions throughout the day.  You will see me at my messy best.  I might scratch my bum or itch my boob.  These things happen.

I should also probably mention that I have no idea what I’m doing with this live video business so there may be a few glitches.  I’ll do my best to keep things running smoothly and in order.

I’ve found sometimes you need to refresh your screen for the live video to come up.  If you don’t see a video directly below here it’s because the coop is now built and the coop cam is now down.