Home » Tips » Organizing » The Christmas Pledge. How’d you do?

The Christmas Pledge.
How’d you do?

You knew this was coming when I invited you to take the pledge.

I am now going to ask how you did. I considered printing out all of your names here (those of you who agreed to take the pledge), but decided against it based solely on the fact that I’m afraid Santa has some sort of patent or copyright on the whole Naughty or Nice list thing.

I can’t afford to get sued by someone who has so much power he can control the behaviour of approximately 378 million children for the entire month of December.

So instead of pledge shaming you I will instead just ask … how’d you do?

I didn’t do well. I did O.K. though. Let’s take a look again at the Christmas Pledge calendar, shall we? 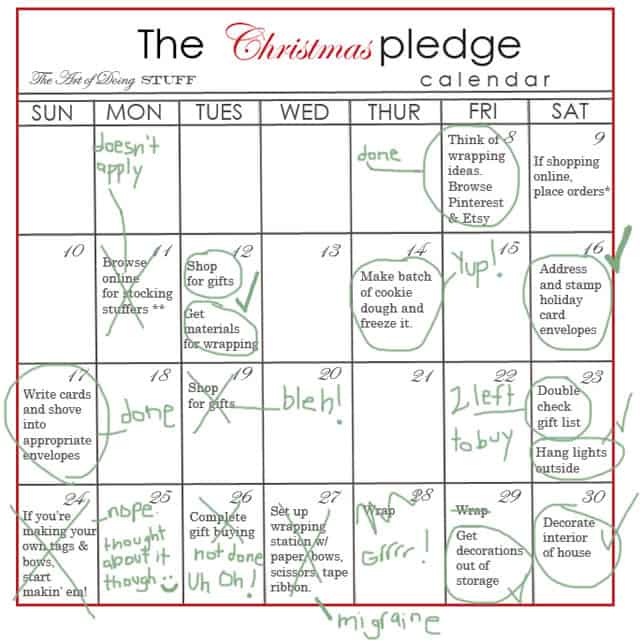 So I still have a couple of presents to buy (which is WORRISOME) and everything to wrap. But I really like the stuff I got for wrapping this year, so I don’t mind doing it in December. I’ll probably do it tonight actually.

Saying the interior of the house is decorated is pretty much a lie. It’s mostly done, but there’s only so much I can do with the current mess of the kitchen which seems to spill out into the rest of the house. I’ve done as much as I can though. It’s not my fault. It’s the kitchen’s fault.

I also didn’t do everything on the exact days written down. The days were more of a guideline to get stuff done. The outdoor stuff didn’t get done until the very, VERY last minute as a matter of fact. Mostly due to the fact that last year I thought I’d hide all of my outdoor Christmas garland in a nook behind the pegboard in my workshop. Which means to get it out, I have to remove everything from my workbench, all the tools and other crap from the pegboard, unscrew the pegboard and remove it, then hop up onto the workbench and pull all the garland out of the nook. Then of course, everything has to be done in reverse.

It seemed like a good idea at the time.

It no longer seems like such a good idea.

It reminds me of the time I ate 3 bowls of chili and 4 pieces of buttered toast in one sitting.

So that’s where I am, 20 days before Christmas.  Not a bad place to be really.   2 presents to buy, all my gifts to wrap and then I also have the food to make for my Christmas Eve party, but I like doing that and look forward to it as opposed to dreading it.

Now, if I hadn’t got everything done prior to this point I would not only be dreading everything I had to do, I’d also be dreading all the food I had to make.  And to compensate for all my feelings of dread I’d eat bowls and bowls of chili, making my stomach feel as though someone had inflated it to the point of explosion with a rusty old bicycle  pump.

Or maybe you can’t speak right now because you’re stuffing your face full of chili.