I bet you thought the coop was finished last year didn't you? So did I.

And it was. There was just the small matter of the chickens eating every plant in my backyard and then crapping it back onto every surface imaginable.  And just for good measure, if there was a small area in the backyard that didn't get pooped on, one of the chicken would make sure to walk through it and track it all around. Chickens are very considerate that way.

Apparently so am I, because I too made sure to track the crap everywhere too.

So this spring I decided I was going to have to section off a portion of the yard for chicken pooping purposes. The side yard where their coop is located was the logical place. If I could somehow keep them in that area they could poop to their heart's content and at least it would all be in one area. They could walk around in the sun, take their dust baths, hold their weekly poker games and what not, without turning my backyard into a poo pavilion.

As a reminder, here's where the coop is and what it looks like. 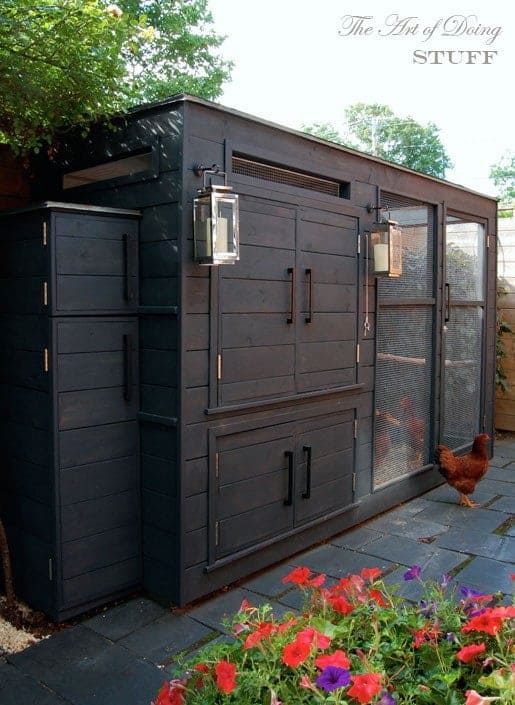 My first thought was to station a scary monster robot in the side yard.  Right at this close end of the coop.  Scary monster robot would make sure the chickens didn't get past a certain area, therefore containing the poop.

My second thought was to stack wood in an aesthetically pleasing manner, with some sort of doorway in the middle of it. That was bad idea #1. Chickens can jump REALLY high, so the stacked wood would need to be around 6 or 7 feet high. Besides, I burned up all my wood by April 15th.  Scary monster robot idea was in the lead.

My second thought was to stack up bales of straw. I was into the whole stacking thing apparently. Stacking is easy you see. Much easier than hammering and drilling and sawing and screaming. Bales of straw would be easy to stack high but you wouldn't be able to see through them. Half the fun of having chickens is watching them. No to the straw.

My final thought was to use swinging wrought iron fence gates. Like this ... 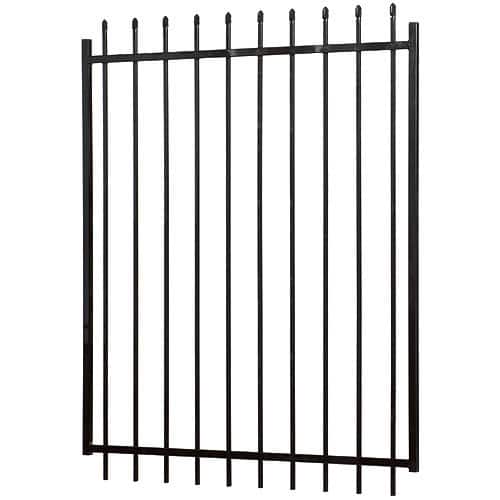 But for some reason, the idea was a bit "off" to me. It wasn't quite right. You know when you look at something in your house and you think That's not right (I find this is often the case whenever I try to dress up my coffee table with a vignette, or put my cats in period piece costumes.)

Sick of making generally all decisions in my life, I sent a quick email off to my Internet friend, interior designer Carol Reed. 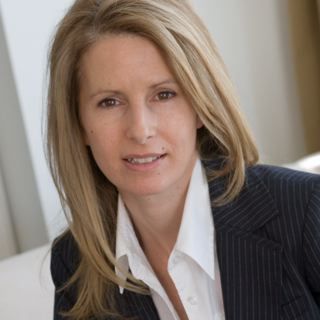 Yeah.  That's right.  I called in an internationally renowned interior designer.  For my chicken coop.  What of it?

I sent her this remarkably fantastic sketch.  YES!  It is a sketch.  I know.  Totally looks like a photograph.  I'm a talent.  I told Carol I had thought of using wrought iron fence gates, but wasn't sure about it for some reason.  Could she please help me?  Please, please, interior designer, help this wretched amateur in her time of need. 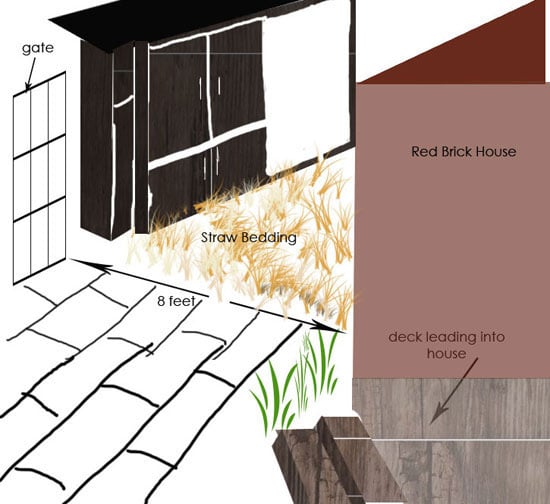 Within 2 days Carol had sent me back these "quick sketches" of 4 options including materials needed and colour options that were the best.  (She knew right away what was wrong with the wrought iron fence I thought of by the way.  All of the lines in my backyard are horizontal.  The fence, the coop, even the square cut flagstone on the ground.) 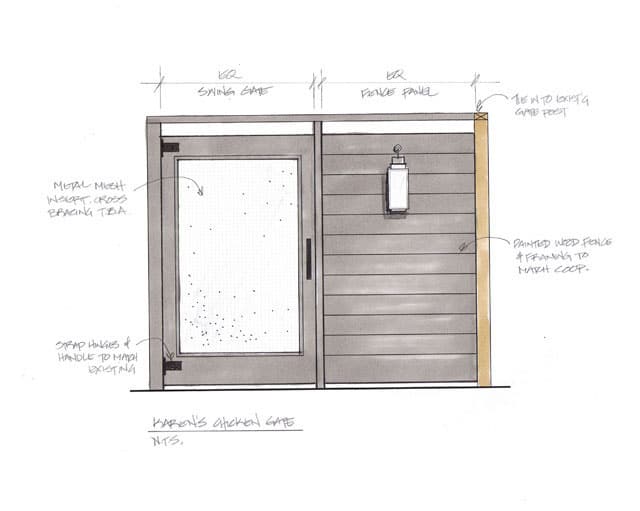 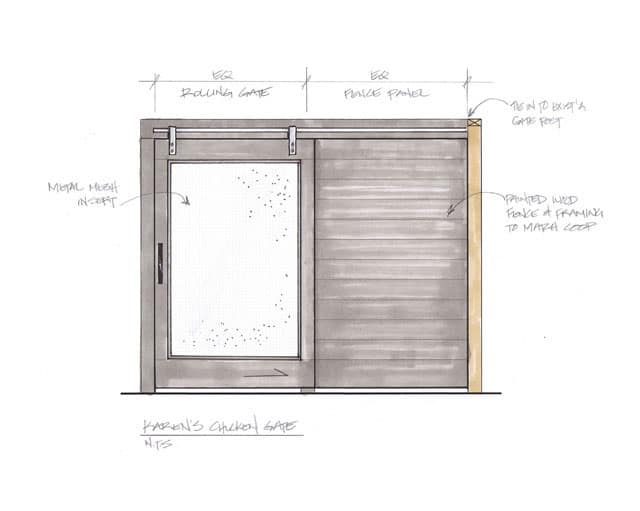 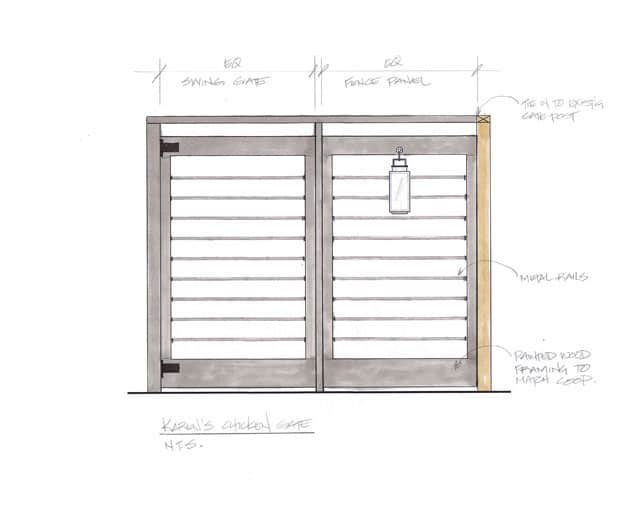 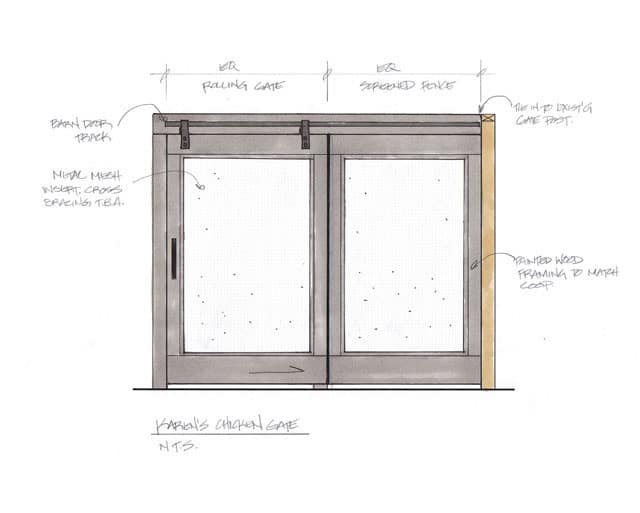 THIS is what separates a professional from ... me.  I knew something was wrong and there had to be a better idea out there, I just didn't know what it was.  I looked over her sketches for about 5 minutes and decided on one design.  The next day I went out to get my materials, and the weekend after that I built the gates.

I will reveal which design I chose, how I did it and the gates themselves in Thursday's post.

But for now ... which one would you have chosen?  And which one do you think I chose?  I will give you one hint.  Against my better judgement I decided not to go with the chicken robot.