So, um, HAPPY FROZEN FOOD MONTH. Yes, there is too such a thing. And March is it. I guess whoever allocates this sort of thing decided that by March, after 4 long months of winter, we’re very, nearly close to stabbing each other. Therefore, a meal that can be prepared without a knife, and involves simply peeling back a thin layer of plastic is not only handy, it’s the criminally responsible thing to do.

Unless you consider TV dinners a crime against the palate.

Betty LOVES TV dinners. LOVES them. And if I’m going to expose my true self here, I love the instant mashed potatoes and spoon full of mystery cobbler that come with them. I couldn’t tell you the last time I had a TV dinner but I still remember the weird and wonderful texture of those fake potatoes full of fake buttery flavour. Love it.

Of course frozen food isn’t just tv dinners. It’s frozen fruit, frozen vegetables, frozen pizza and all that other stuff in those coolers on the side aisle of the grocery store. The side aisle that I never seem to go into. I don’t buy frozen food yet my freezer is so full I wear boots when I open the door to it to ward off a broken toe.

So who cares that it’s frozen food month? YOU do! You care! Because the reason you clicked on this post is because you wanted to learn how to slash the cost of your groceries. And it all starts with Frozen Food Month. Actually it all starts with January and Oatmeal Month.  More on that in a minute.

If you pay attention, you’ll notice that certain things go on sale in grocery stores at certain times. And you’ll try to remember when that is, but you can’t. For instance I know I can buy beef tenderloins for a REALLY good price about once a year but I have no idea when that is. So every month I stare into the meat shelf trying to telepathically connect with the beef, willing it to jump out of its styrofoam tray, grab me by the cheeks and say “MAY! MAY IS NATIONAL BEEF MONTH! I’LL BE ON SALE THEN!”

Paying attention to what “National” month it is, is one way you can slash your grocery budget, by knowing when the sales are and stocking up then. 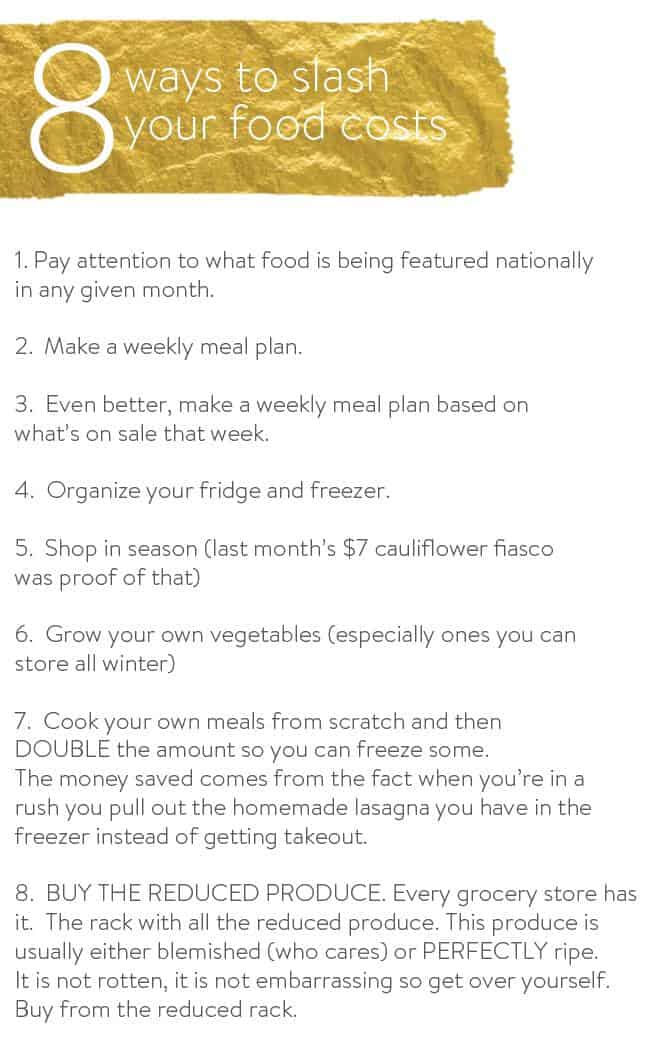 I’m not just making this shit up. I do all of these things.  (Yet I still have an astonishingly high grocery bill, so I’m not sure I’m fit to give advice)

Did you notice #8 on that list?  Shop the reduced produce section?  Do it.  Plan a meal around it.  It used to be that people avoided the reduced section of produce with their sad little bruised cauliflowers, but in the past year or so I’ve noticed it’s kind of become the hub of the vegetable section.  With all the talk about vegetables in the past while and the increase in weird looking heirloom produce, people aren’t as mortified by an apple with a single bruise on it anymore.

O.K., Here’s how a typical week here looks in terms of food.

Every Sunday I go through the store sales online and create my menu for the week around sale items. And cravings.  Also around cravings.  Like my recent spaghetti and meatballs craving for instance.

I then look at my menu and figure out what meals can be turned into OTHER meals.

So if I make a ridiculously delicious batch of Gramma’s Spaghetti and Meatballs on Monday, I’ll reserve a little bit of the cooked sauce and then plan to make Chicken Parmesan with that bit of reserved sauce.

If I make a hearty soup on Tuesday, I’ll know I can have a huge bowl of it, then with the bit leftover turn that into a meal by adding a big salad and bread to it on Thursday.

Get it?  Always rotating, adding and mixing up a lot of the same ingredients throughout the week.  Need to buy frozen corn to add a little to soup?  Plan to make corn cakes on another night.  This’ll stop the dreaded freezer-full-of-frightening things in a year.  You’ll use up the stuff you buy instead of throwing it into the back of the freezer where it will turn into a 17 pound chunk of ice with some sort of mystery food in the centre of it.

If things don’t go as planned  I always have that freezer full of extra meals that I can just grab.  Wanna organize your freezer? It’s the best thing I’ve ever done.

When I head to the grocery store I have my list of ingredients and that’s what I buy.  Sometimes I won’t plan a meal for one of the days so I can be inspired by what’s in the store.  If you can’t stop yourself from impulse buying, make sure you have a plan for that item.  Like berries.  Whenever they’re on sale it’s hard to resist.  So we go home all excited about our pint of blueberries which rot in the fridge because we didn’t have a plan for them.  When you pick up that impulse ingredient you’d better pick up the rest of the ingredients that you need to go with it and make sure you use them.  (with blueberries for instance I’d make sure I had oatmeal, some sliced almonds and vanilla almond milk. When I got home I’d make a big batch of Oatmeal for the week and have Oatmeal with, blueberries, sliced almonds and almond milk every morning for breakfast)

Now we’re back to where we started.  National Frozen Food Month.  Print the guide that’s below so when the time comes you don’t have to scramble back to my website trying to figure out when the best time to buy crabs legs is. 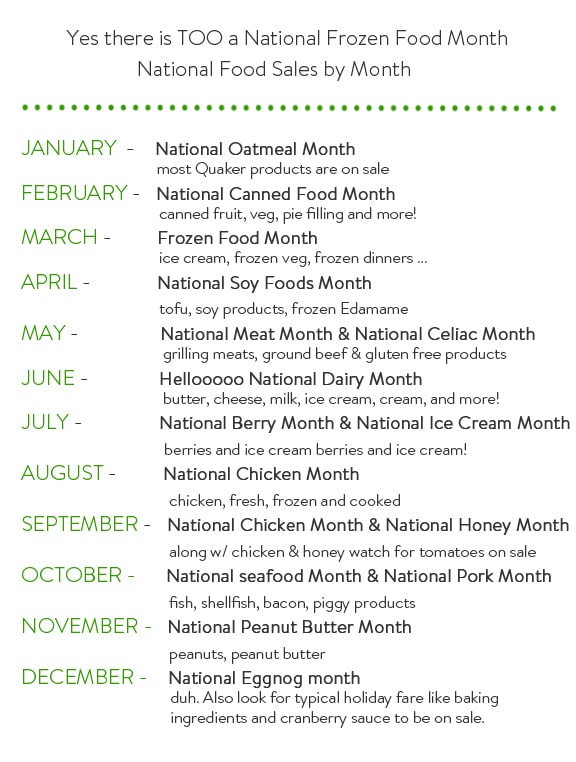 Now if you’ll excuse me I have some spaghetti and meatballs to make.