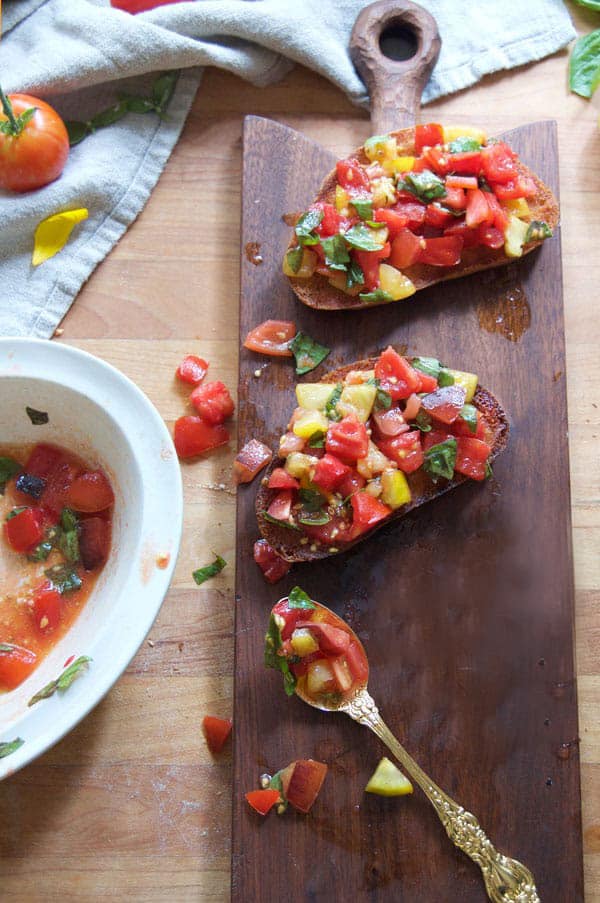 If you're the kind of person who likes to cook, you know the satisfaction you get from serving someone food and having them smile at the end of eating it. If they actually mumble out a "Soooo goood" as they're eating it even better. Betty does that all the time when I feed her, (but she doesn't count because she makes the same sounds eating a TV dinner or a pistachio she swept up from behind the fridge.)

So the MMMMMMmmmmmm sounds are good, but the Holy Grail of feeding someone is bringing them to tears. Reducing a human being to a quaking, sobbing mess whose greatest fear in life is no longer death ... but the thought of never eating this delicious food again.

On August 22nd, 2014 such a miracle occurred in my kitchen. And then it happened again.

I thought it was just a fluke, like when people see Jesus in their Cream of Wheat, but when it happened a second time I knew I'd stumbled upon something pretty spectacular. Definitely more spectacular than a hairy fridge pistachio.

Do you want to know what this miracle food was? Bruschetta. But you knew that already if you read the title of this post.

This isn't just any bruschetta though, it's bruschetta inspired by the movie Julie & Julia which if you don't know, it's a movie based on Julie Powell's blog in which she chronicled her (successful) attempt to recreate every recipe in Julia Child's "Mastering the Art of French Cooking". GREAT premise for a blog.

In the movie the bruschetta looked and sounded so goooood. And if you watch the scene from the movie, Julie's husband does exactly what you want people to do when they eat your cooking. He says, "This is  GOOOOD!"

Also I love whatshisname. Whatshisname is my favourite character on The Mindy Project right after Mindy. And the other guy who is so funny. You know. The nurse.

First of all a few tips:

1. Use fresh, crusty bread.  Whole slices!  Not a baguette.

3.  Don't even attempt this if it isn't summer and you don't have fresh tomatoes. 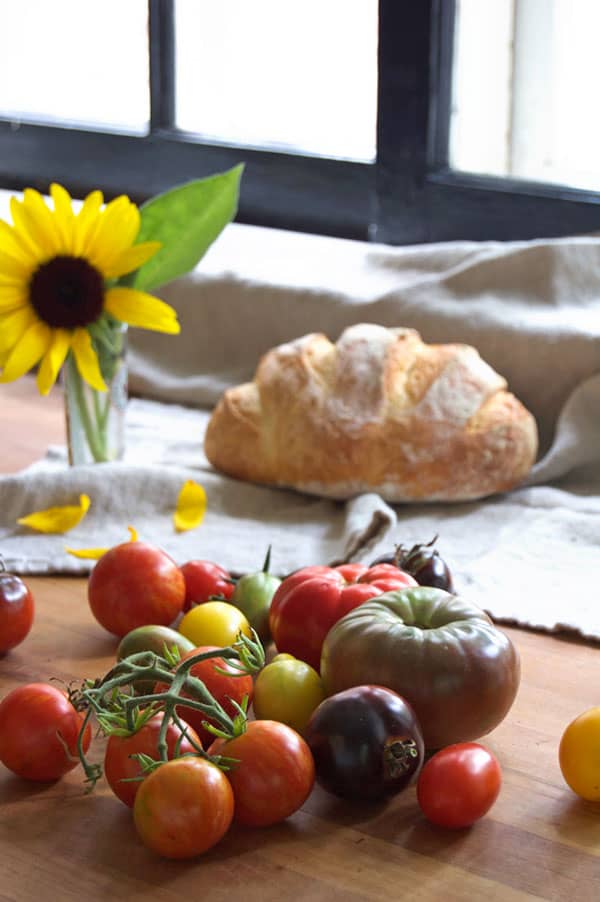 Dice a few fresh, local tomatoes. Extra points for heirloom and homegrown. Even if the home wasn't yours. 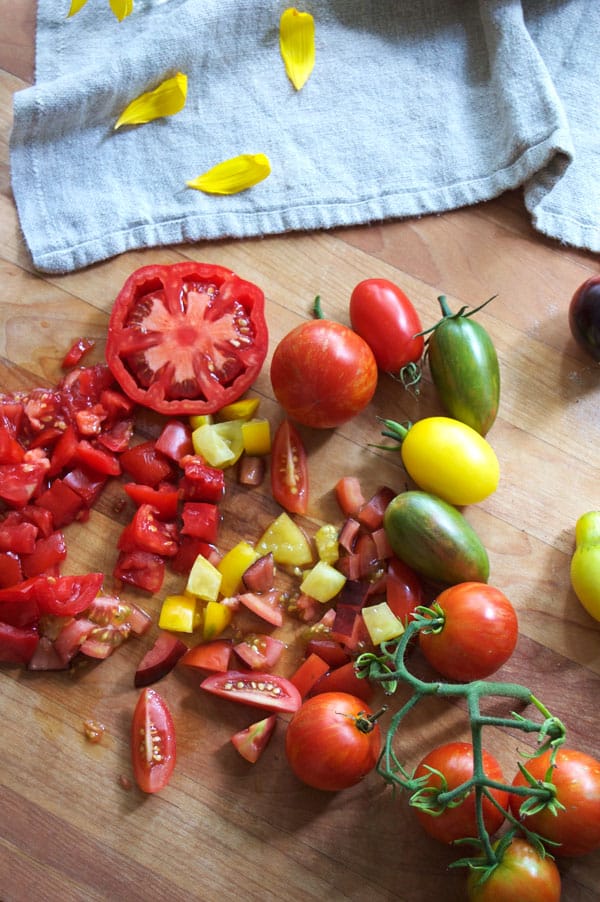 Tear up a handful of fresh basil and add it.  Add lots if you love basil, little if you don't. I used this sized bunch for around 5 small-medium tomatoes.

I  know you're alarmed that there's no fresh garlic in this recipe but there isn't. I'm not going to second guess Julia Child. It's is 100% delicious without the overpowering flavour of garlic. If you want to add garlic you can but I BEG you to try it without first. 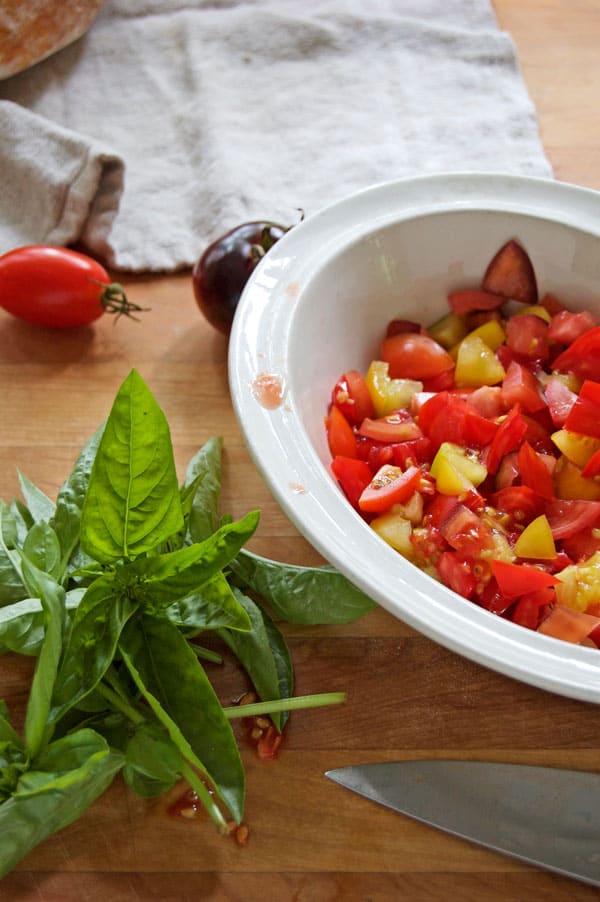 Drizzle the tomatoes and basil with a good amount of olive oil and let stand for 30-45 minutes. 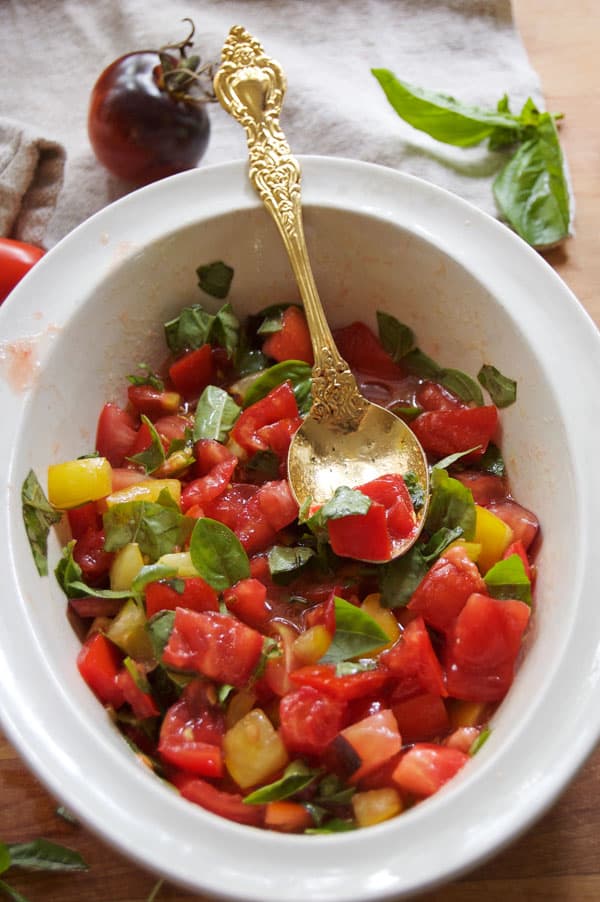 After 30 minutes, sprinkle with salt and pepper (I actually don't use pepper but go nuts if you're a pepper person) let sit for another 10 minutes or so. 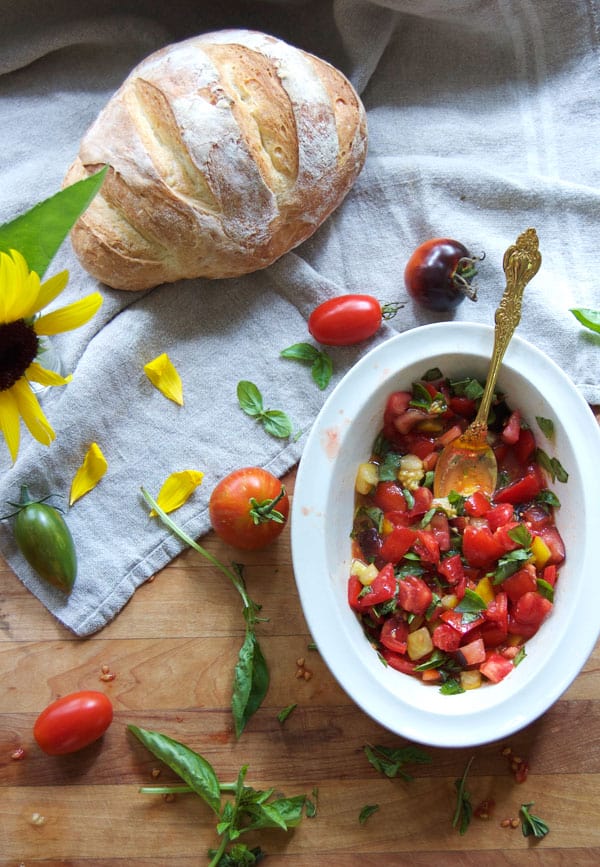 Cover the bottom of a pan with olive oil until it's approximately 3mm deep.  Just glug it in there.  Heat pan over medium/low.  Not too hot or your bread will burn, not too low or it'll just soak up a bunch of oil and get gross.

To test if your oil is hot enough to fry place the end of a wooden spoon in the oil. If the tip forms bubbles right away, it's at the right temperature to fry. 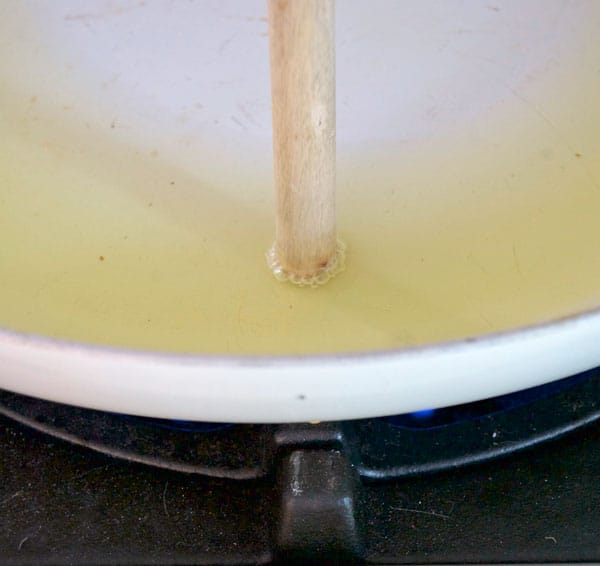 While the pan is heating, slice your crusty bread.  I make my own bread using the master recipe from this cookbook, The New Artisan Bread in Five Minutes a Day but you don't have to make your own bread. Just use a fresh, dense, crusty loaf. 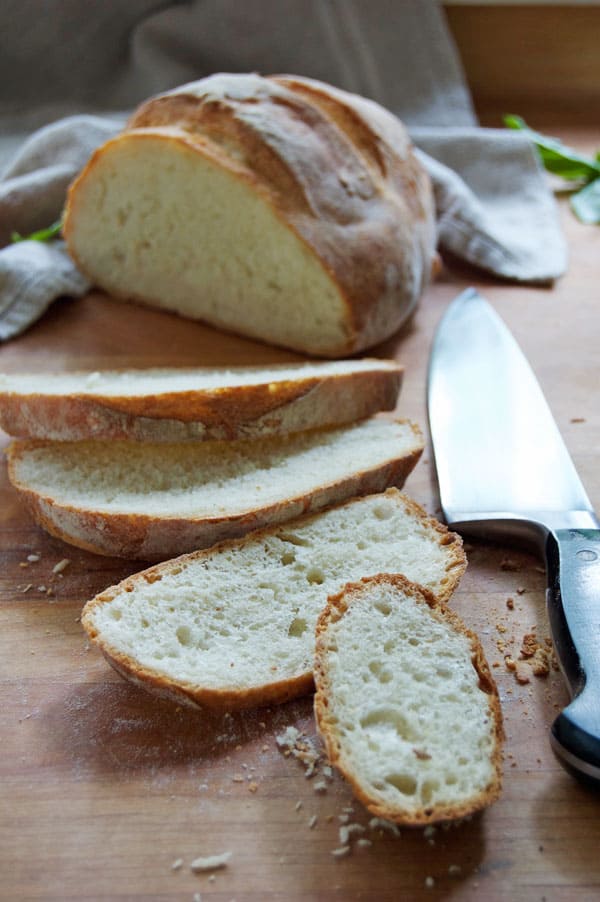 Fry bread slices in oil until browned or your tongue falls out of your mouth. Whichever comes first. 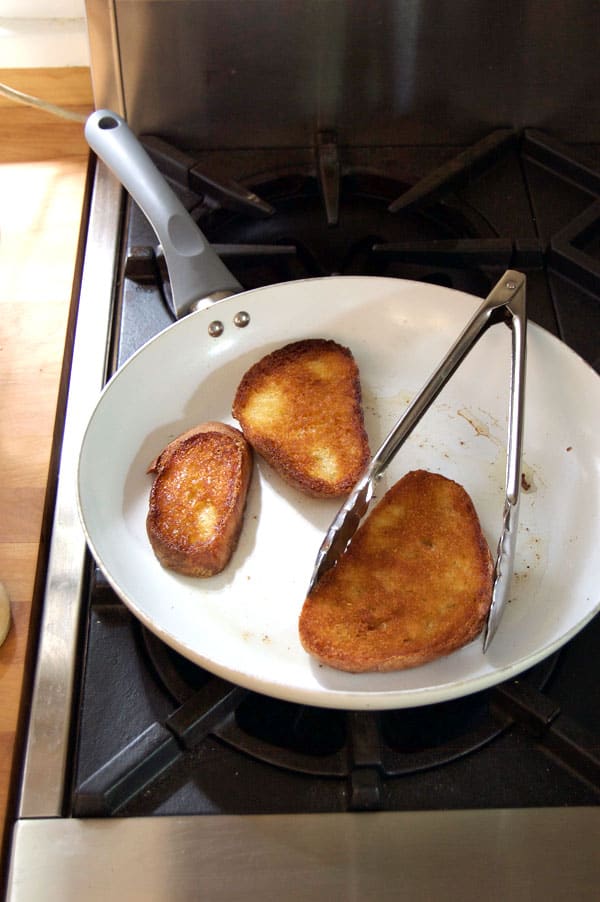 Remove bread from the pan and generously spoon the tomato mixture over the top.  But first, maybe, just look at the golden brown, toasty, olive oil drenched goodness.  Smell it.  Love it. 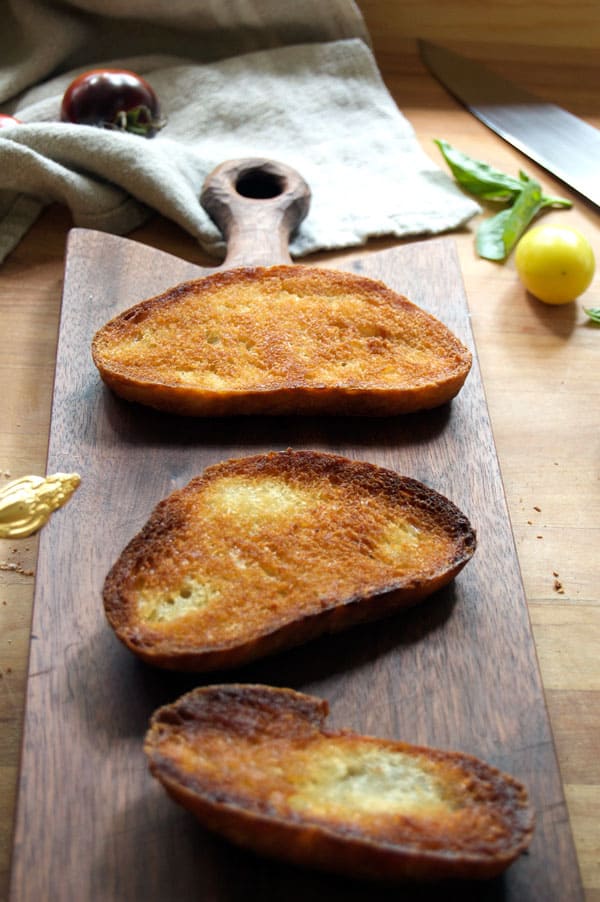 O.K., NOW you can top it with your tomatoes and basil.  Just spoon it right on there.  Lots of it. 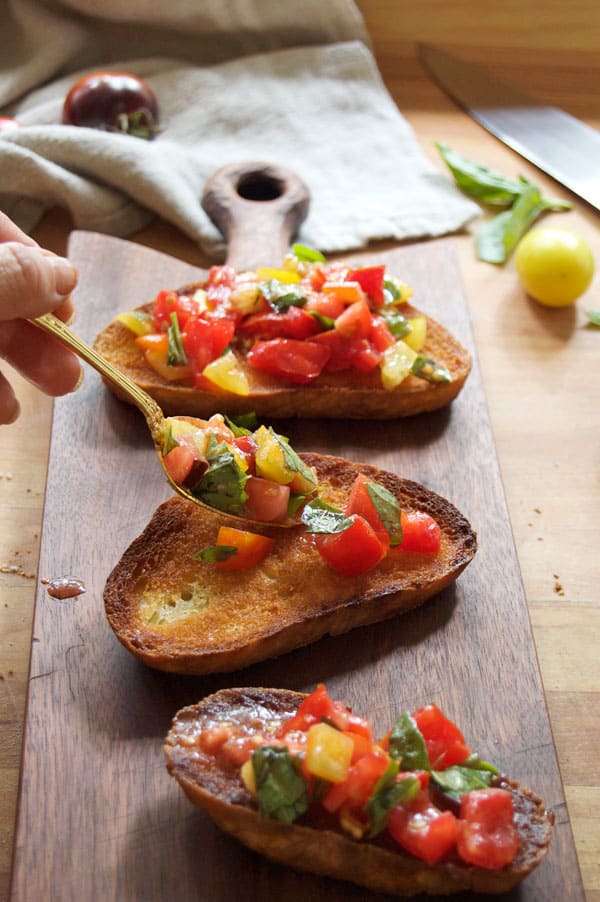 And now you eat it. 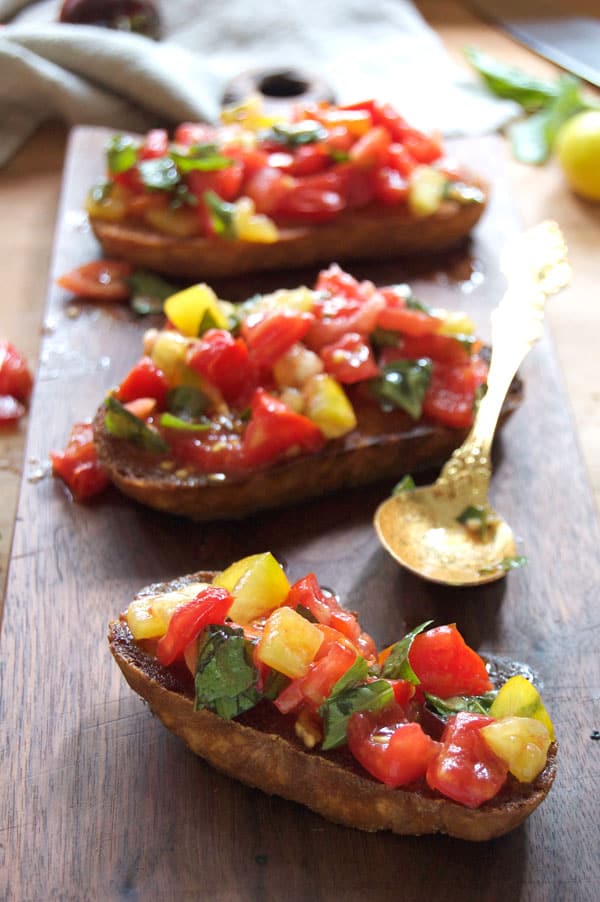 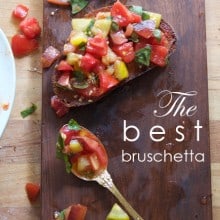 Bruschetta from the movie Julie & Julia

If you've watched the movie Julie & Julia you no doubt noticed the bruschetta love scene. I'm not sure anything in a movie has ever looked so delicious.  This is that recipe.
4.78 from 9 votes
Print Pin Rate
Course: Snack
Cuisine: Italian
Prep Time: 1 hour
Cook Time: 5 minutes
Total Time: 1 hour 5 minutes
Servings: 2
Calories: 637kcal

You can cut the calories in this recipe by using less oil to fry the bread. It won't be *quite* as good, but the snack will have far less guilt associated it. To test your oil to make sure it's hot enough, dip the end of a wooden spoon into the oil. If bubbles quickly form around the wood, it's the right temperature.  If they take a while to bubble, it isn't hot enough.  If the oil bubbles and spurts crazily, the pan is too hot.

I've listed this as a snack, but in the summer this could easily be a meal. Especially if you round it out with a big bowl of ice cream.

Serve the bruschetta HOT.  With a box of Kleenex. 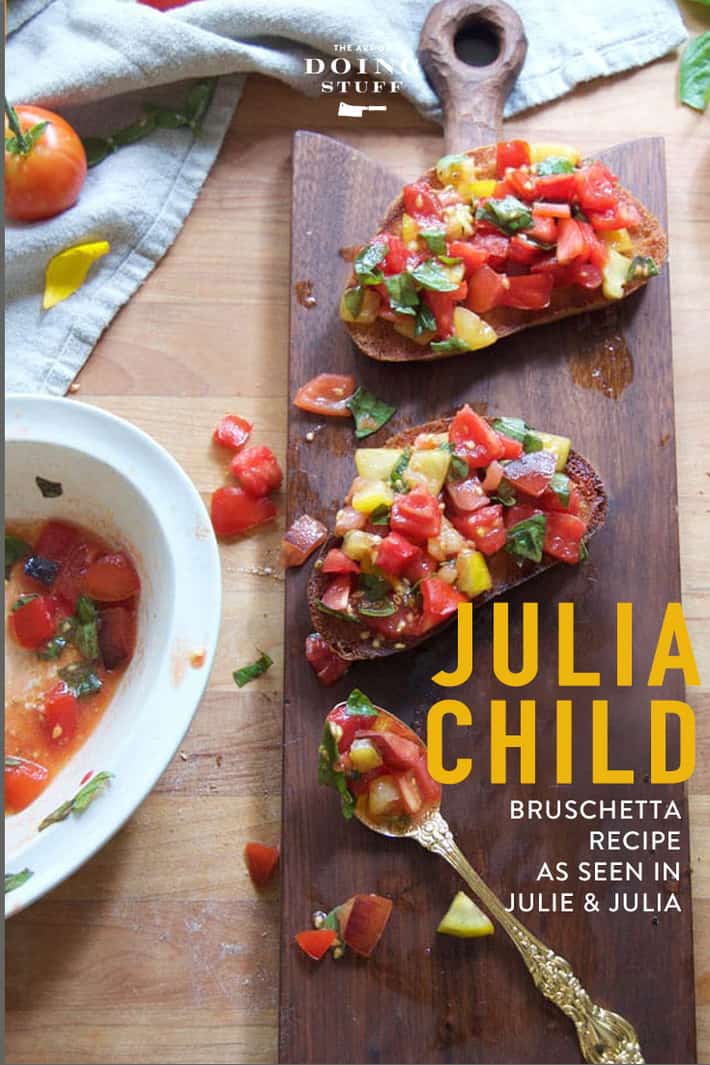