Home » HOME stuff » Kitchen Tour » A Kitchen Renovation.The FIRST thing you should do.

A Kitchen Renovation.
The FIRST thing you should do.

I swear to you I have no idea how this happened, this kitchen renovation of mine.

One day I was simply laying a new floor and the next I was all hopped up on new sink and fridge choices, frothing at the mouth over the possibility of a new tap.

Picking out the things I like, I can do.  I can pick out things I like while blindfolded with earplugs in and mittens on.  What I cannot do is plan a kitchen.

And this kitchen of mine needed a new plan. This is how my current kitchen is laid out … 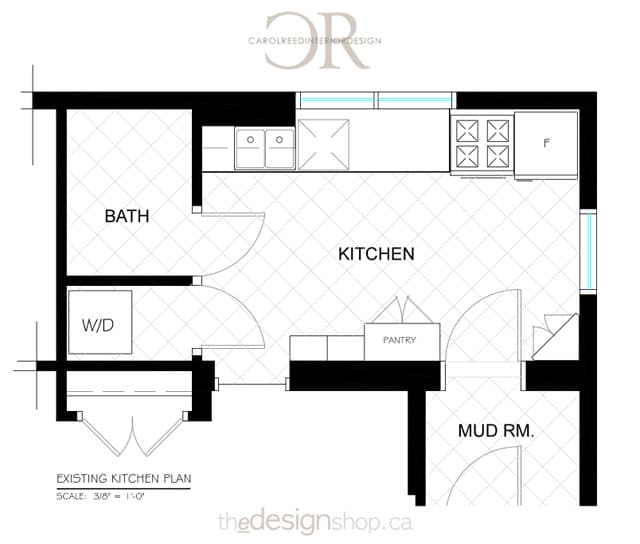 The fridge is directly beside the stove, there isn’t enough storage and I’m pretty sure  Idris Elba, whom I brushed off just a few months ago, wouldn’t enjoy cooking for me when he has to go all the way into the basement to get the Kitchen Aid out.  I’ve totally un-shunned Idris by the way.  We’re back on, so feel free to let him know.

Left in my own hands my kitchen would become a disaster.  There would be be a monster walk in refrigerator, a fireplace, but not necessarily any room for a stove.  Definitely no sink.

Because I get confused.  My brain just can’t handle the thought of rearranging the things in the kitchen and making them better than they are.

So as soon as I came to terms with the fact that I was indeed going to do my kitchen over, I did the first thing anyone planning a kitchen renovation should do;

Carol Reed is someone who I know only through Twitter and the Internet. I’ve been following her design career through the miracle of Twitpics, Instagram and her blog.

Plus she designed my Chicken Coop gates for me so I knew she had the grit needed to tackle my kitchen which holds 4 doorways and 2 windows within it’s walls.

It all started with a few emails sending Carol some inspiration pictures, my kitchen measurements  and what my wish list was.   I knew I wanted to keep the kitchen authentically old feeling and I wanted a kitchen table.  I did not want an island.  To me an island is just a space sucking trend that doesn’t have a real purpose.  So, no island.  But I definitely wanted an antique butcher block in the kitchen.  Either the relatively small one I already own, or a great big one.

After several and I mean SEVERAL back and forths between us, we whittled it down to these plans.

What I don’t like about this plan is the layout is not much different than my current kitchen and has less storage. 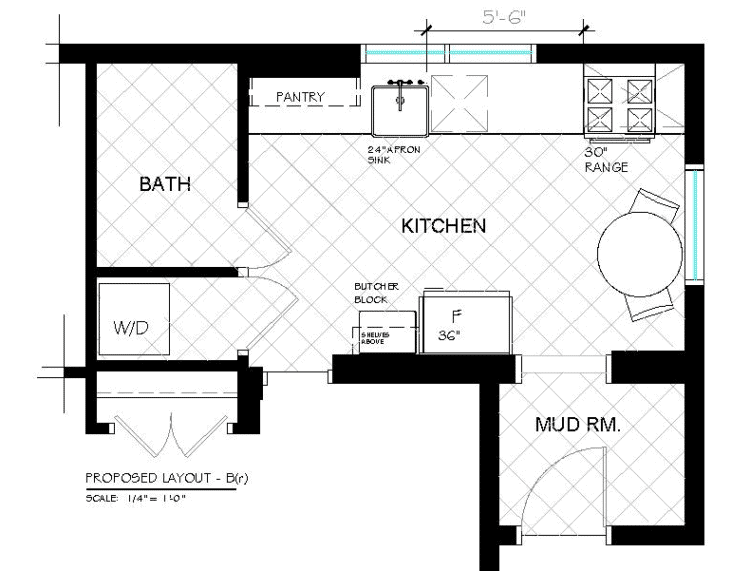 What I like about this plan is there’s a fair amount of counter space.

What I don’t like about it, is the fridge being so far away from the main work area. Plus there’s still less storage than I’m used to.

What’s labelled as a kitchen island here is actually a great, big antique butcher block.  Which I LOVE. 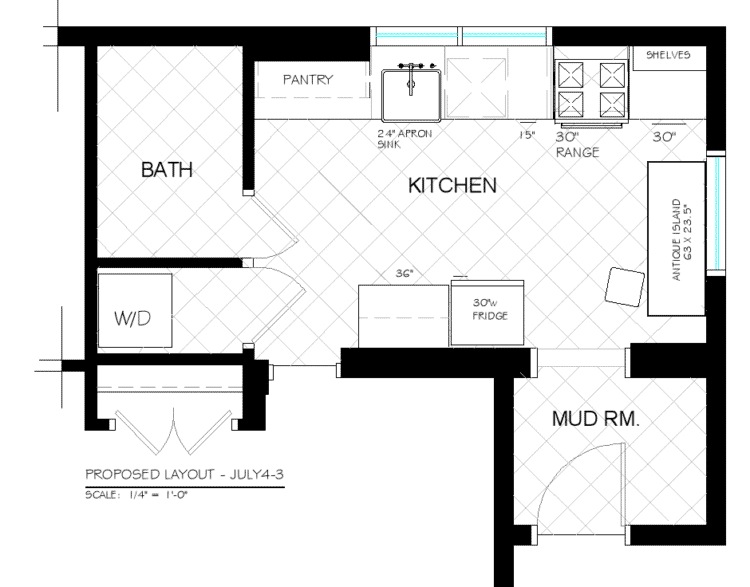 I really like this plan. There’s a HUGE pantry, but I’m not so sure about looking in at the fridge from the dining room.  I really don’t know if it’ll bother me or not.  If you’re wondering why the sink isn’t centred on the kitchen window in these plans, it’s because it’s because having as much counter space as possible was more important to me than a centred window.  Moving the sink off to the side allows me to have a continuous run of counter as opposed to a little bit on either side of the sink. 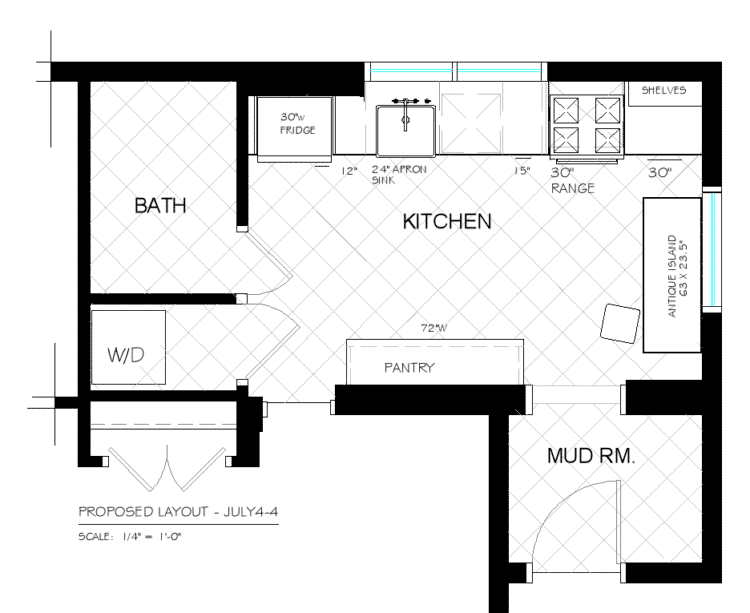 It has a lot of storage, a nice view from the dining room (a big pantry), all kinds of counter space

and a place to sit, even if it isn’t a real table. 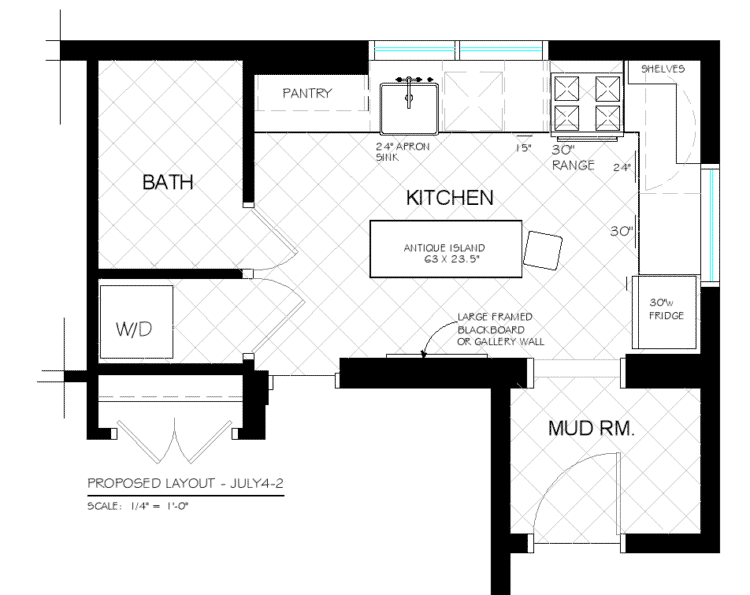 So that’s the plan I went with. The final plan.  Which, you may have noticed, has no butcher block but DOES have an island in the middle. See?  I’m totally screwed up and can’t be trusted when it comes to kitchen ideas.

It took me months to decide on this plan partly because I knew I was doing things that were unconventional and quite honestly, wrong, according to most kitchen designers, but right for me. Carol was nice enough … and wise enough, to indulge me. She convinced me when my ludicrous ideas truly were ludicrous. And reminded me of things I would never have thought of. Like the fact that even though I’ve always dreamt of having a 6 burner stove, it didn’t make sense to have one if it meant I wouldn’t be able to have a corner cupboard.

And partly because a kitchen renovation, even when you aren’t paying for the cabinets is an expensive thing. There’s electrical and plumbing, and installation and lighting and appliances and clown costumes …. uch.  There’s a lotta stuff.  So, you don’t want to get it wrong. And the layout of the kitchen is the one thing you can’t change your mind on.

If you decide you want a new sink or lamp, those are things you can change down the road, but the layout is here to stay until your next kitchen renovation. Which will hopefully happen exactly once every NEVER.

You wanna know the most interesting part of this story?  Carol Reed and I … have never met.

Along with her regular design business she runs an e-design business.  You just send her your measurements and inspiration photos and she does the rest of the work.  IT’S AN INTERNET DESIGN MIRACLE.

I cannot think of a better way to work.  It was genius.  AND less expensive than having her work here with me in person.  Plus there was the added bonus of me not being able to see Carol roll her eyes when I suggested things like a trapeze so I could swing from one end of the kitchen to the next with a stylish flourish.

And she couldn’t see me scowl when she suggested something ridiculous like paying attention to where my toaster, coffee maker, etc. would go so I could have electrical outlets installed at those spots.

So that’s it.  The kitchen is planned.  Somebody tell Idris.