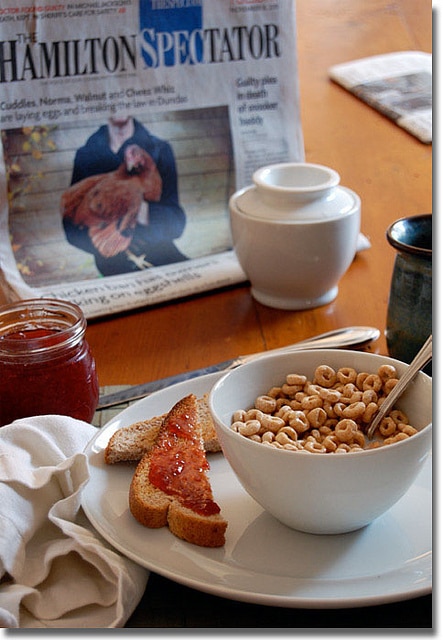 I became an activist yesterday.

I didn't mean to.

I certainly didn't plan it.

But nonetheless it happened. And yesterday everyone across the city woke up to this.  Me and my chicken on the front page of the paper in full colour.  Above the fold.  Clearly a slow news day.  Had there been a sale on at the local Giant Tiger or a cat stuck in a tree I'm sure my story would have been relegated to somewhere in the depths of the paper.

As some of you know, I have chickens.  As some of you know, whether this is legal or not in my municipality is questionable.  When I first got my 4 chickens I let all my neighbours know and got a feel for whether they were O.K. with it or not.  No one seemed to care and in fact as far as I could tell they were kind of excited about it.  So I kept the chickens and started building a coop.

I have to admit, even I had reservations about keeping chickens.  I really had no idea what to expect so I had the same concerns the people on city council probably have.  And I had these concerns because I was both misinformed and uneducated on the matter.  As the people on city council probably are.  Who can blame them?  They can't know everything about everything, right?

The people who argue against having backyard chickens cite disease, noise, smell and general hell breaking loose if people are lawfully allowed to own chickens.  I would like to take this opportunity to address these points for the benefit of both city council and those who wonder about owning chickens themselves.

There are those who believe that backyard chickens are disease riddled incubators for Avian flu among other things.  In truth, (as far as I have researched) there has never been any cases of Avian flu among North American backyard chickens.  The Avian Flu rarely occurs, and when it does it shows up in either third world countries or most commonly chicken plants.   Chickens get Avian flu from coming into contact with other chickens or the feces of chickens with Avian flu.  In the case of third world countries, many people who own chickens feed their chickens scraps of raw chicken that are infected with the disease.  These chickens are then allowed to roam around the village infecting other chickens.  Since most backyard chicken farmers I know  neither feed their chickens raw, disease filled chicken meat, nor take them out for play dates with other chickens ... I do not think the Avian flu is a threat to our community.  In fact, large groups of chickens together in poor conditions harbour the best breeding ground for Avian Flu.  So backyard chickens are actually the solution, not the problem.

I would like to say chickens are silent and most have had their voice boxes removed at birth, but that isn't the case.  They do make noise.  About the same noise as a few pigeons.  They cluck and make cooing sounds for a few minutes a day.  It's inaudible unless you're right beside the chickens.    Chickens have also been known to release a loud BUCKOCK when they've finished laying an egg.  They're kindda proud.  If you can hear the sound of it over the trucks, Harley Davidsons, leaf blowers and barking dogs in my neighbourhood I'll give you a free half dozen eggs.   Roosters on the other hand, are loud. They really do cock-a-doodle-do at dawn. And they continue it all day long.   I know this because one of the chickens I got turned out to be a Rooster.  After his first sunrise cock-a-doodle-do I got on Kijiji, put up an ad and had given him away to a nice farm in the country within 2 hours.  I believe it is best to ban Roosters in an urban setting.

Yeah my chickens smell.  They smell like chickens.  They don't smell like a poultry farm because I only have 4 of them.  Basically they smell like a dirt road mixed with pine shavings.  Clearly not as appealing as dog crap on a damp day, but nice nonetheless.  If I were to own 20 or 30 chickens I'm sure there would be smell associated with them.  So I absolutely support a limit on the number of chickens allowed in an urban setting.  Many municipalities cite 6 as an acceptable number.  I would have to agree with this number as an appropriate number for an urban setting.

Finally I'd like to address a few points of concern that were made in my local paper.  One fellow was genuinely concerned that if backyard chickens were allowed, even in a limited number, all hell would break loose.  I mean, what if every person in a town got 4 chickens.  What then??  There would be mayhem!  Neighbourhoods would stink!  The disease!  The noise!!   To that I say, um ... what if every person owned 4 dogs?

Cats, dogs, pigeons, and pigs.  They're all allowed in the city of Hamilton, in unlimited numbers no less.  Just not chickens.  Not even one.  New York, Vancouver and London are just 3 of the cities that allow backyard chickens.  These are not hick towns, filled with people dropping from disease and tumbleweeds blowing down their streets.  They are progressive, world class, influential cities.

I became an activist yesterday.

I didn't mean to.

I certainly didn't plan it.

But nonetheless it happened.

Excellent presentation for council in Springfield, Missouri where backyard chickens have proven to be a success.

If you live in Hamilton ... please sign this petition to  help me keep my chickens.