Wanna hear/meet me in person?   I'm shorter than you think.

I'll be speaking about the adventure of my Front Yard Vegetable Garden in Niagara Falls on Sunday, February 9th at the Seedy Saturday event.  More on that in a minute.   But first ...

One of the first posts I did on the Art of Doing Stuff was a post on how to grind your own ground beef. It was a reaction to the movie Food Inc. And doingies. Those things in meat that go "doi-nngggg" in your mouth sometimes. Or crunch. Or simply won't chew away no matter how long you try.

The focus of the movie is the business of food. Hence the clever title, Food Inc. One of the main focuses of the film is seeds. Or the lack of them due in part to the government and believe it or not, one seed company. Monsanto.

Monsanto is most well known for their genetically modified corn seed.  It produces corn with a flavourful punch of sweetness and pesticide!  The company has created corn that has pesticides bred into every cell of every kernel.    So if certain bugs happen to try to eat the corn, they will die.  Because the plant itself is a pesticide.

Now, normally this sort of thing wouldn't bother me.  Honestly.  I'm aware of what I eat and actually eat really well.  But I'm not a zealot.  Do what you can, when you can.  That's my motto.  So, with regard to the frankencorn I'd figure, well ... I don't eat that much corn.  If that uncooked pork hamburger I ate in Antigua in 1990 didn't kill me, this corn sure isn't.

But then came the bees.

My friend Russell is a beekeeper.  One who keeps bees.  Last spring he got 2 colonies of bees and brought them out to his fields.  One colony did fine.  They thrived.  The other colony ... did not.  Tiny little bees, alive, but unable to do what they do.   Gather pollen and make honey.  There was something wrong with them. 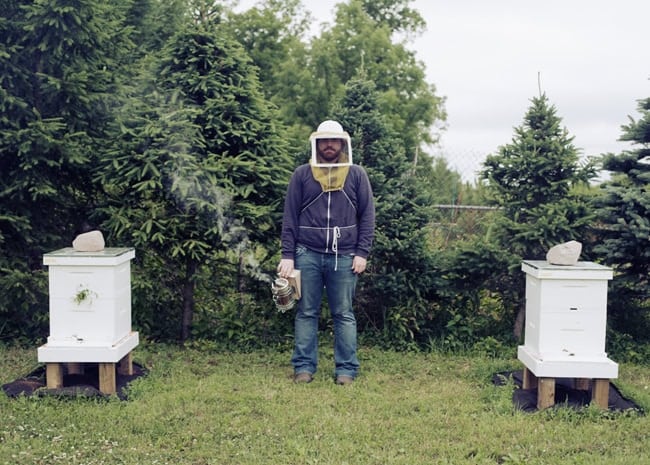 When Russell contacted the guy he bought the colony from he was told that particular colony of bees had been drinking from puddles in a corn field.  A corn field that was planted with pesticide infused corn seed.  After rain, the pesticide within the cells of the corn, leached into the dirt and therefore the puddles on top of the dirt.

All the bees that came to one of those puddles to drink, became very sick in a very weird way.  Stammering.  Shaking.  Stumbling. The man who sold Russell the colony of bees suggested he burn them and come back for a new colony.

Eventually, Russell had no choice but to kill them. They were sick and miserable.

All because of genetically modified corn. 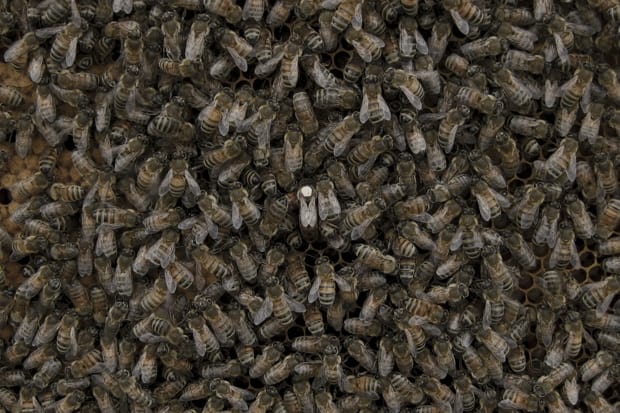 And it's not an easy fix.  For one thing very few seeds are allowed to be sold legally for commercial sale.  Very few.  It's costly and a long process to get any new seed onto the list.  It's big business and the small farmer just doesn't have the money or the clout.  So they're forced to grow food they may not necessarily want to grow.

Because of this, heirloom or heritage seeds have been lost at a rapid rate.  They are the seeds of plants that have been around for generations.  But they've been pushed away and in some cases lost forever in favour of commercial seeds.  Vegetables that grocery stores want to buy are perfectly uniform, picture perfect, unmarked food.  Someone decided a tomato should be perfectly round, bright red and have the ability to travel thousands of miles without bruising.  So ... that's what we have to choose from at the grocery store.  Oddly, not a whole lot of thought seems to be given to how it will taste.  Presumably because we shop with our eyes not our mouths.  Unless you're me in the grape aisle.

Where was I going with all this?

Seedy Saturday is an event held by different organizations and people all across Canada for the sole purpose of selling and exchanging open-pollinated and heritage seeds.

The very first was organized in 1990 by Sharon Rempel in Vancouver, British Columbia and it's spread across Canada and into parts of the UK since then.

Most events have seeds and gardening related stuff for sale as well as a big table where you can drop off the seeds you've saved and pick up a packet of someone else's seeds for free.  Along with the seeds, there are vendors and workshops and speakers.

As I mentioned at the beginning of this post, I am one of the featured speakers at the Niagara Falls Seedy Saturday Event this year.  I'll be giving a photo presentation of last year's project of ripping out my front yard and putting in a vegetable garden.  I'll cover how I did it, how many plants I grew, which ones I'd grow again and how to grow a few of  the less familiar vegetables like Sweet Potatoes and peanuts.  I also have a small Art of Doing Stuff gift for everyone who shows up.

If you plan to come you might wanna show up wearing a tee shirt with your Twitter handle or Gravatar picture on it so I know who the  hell you are.

Not in Southern Ontario?  Check here for a Seedy Saturday event coming up  in your area.