This is what it’s come to. Paleo “bread”

def: A nutrition plan wherein only foods eaten by the Palaeolithic caveman are consumed.  So, yeah.  A diet that uses Fred Flintstone as its model of health and wellness. 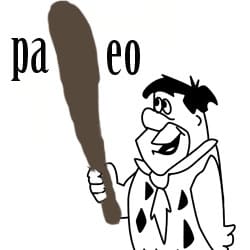 O.K. It’s been 4 weeks since I’ve been aiding the fella in his quest to be Paleo until he’s sick of it.

And I have learned 3 things in this past month.

2.  When in doubt, use cauliflower.

3.  When in doubt use more cauliflower.

Craving something that looks like mashed potatoes?  Mash up some cauliflower.

Craving something that looks like rice?  Chop up some cauliflower.

Hashbrowns?  Cauliflower!  Pizza crust?  CAULIFLOWER!  The possibilities for torturing one with a vegetable as unpleasant as cauliflower … are endless.

That’s the problem with Paleo and the even bigger problem with just starting out on Paleo.  You’re constantly trying to reproduce food you love with horrifying results.

Because the gut wants what the gut wants.  And your gut tells your brain to find ANYTHING it might mistake for pasta.  Like spaghetti squash.  Or hair.
So.  We try to copy, replicate and reproduce our favourite  recipes out of ingredients that we were never intended to create them with.

When I started this meal plan in support of the fella and his desire to do things for no particular reason other than to do them, I swore I wasn’t going to substitute.  I wasn’t going to make anything that I didn’t already make on a regular basis.  So I went through my recipes and normal meals and found a few that with no adjustments at all were Paleo.  And by few I mean none.

That pretty much cuts out food for me. Chili? Nope. Can’t have it. Roasted potatoes? No. Buddha Bowl with tofu and rice? Double no. French toast? No. Potato Soup, homemade pasta, caesar salad, oatmeal, pizza, quinoa salad. No, no, no, no, no, no.

2 days into it I started Googling Paleo bread recipes.

3 weeks into it I decided on a Paleo bread recipe and I made it. 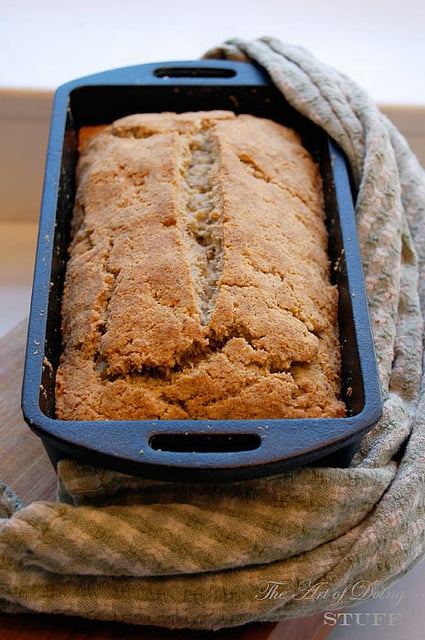 Looks good doesn’t it? It was crumbly and dry and grainy and I wasn’t surprised one bit. Nor disappointed. When you make “bread” out of coconut oil and almond flour you can’t expect bread. You can expect “bread”. And I was O.K. with that.

I tried a piece of the bread with some honey drizzled on it (to compliment the odd coconut flavour of it) and it worked well. The texture is sort of like a cross between banana bread and corn bread.

It looked like bread and that was pretty good.

Oh God. I’m one step away from making “spaghetti”, I can tell.

Wish me well dear readers.  I’m a mere day away from getting my 30 day Paleo chip.  I don’t know if there’s going to be a ceremony or a presentation or anything, but I’m pretty excited about the possibility that I’ll be getting an actual potato chip. Yabba Dabba Do.