Tupperware and Rubbermaid bins are on sale at your local hardware store right now. How do I know that?  How do I know these things are for sale around you no matter where you live?  The same way I know exercise equipment, diet books and smoking cessation devices are on sale near you too.

It’s the rule of the resolution.

Take one resolution, add one retailer, mix it all together and you have a frenzy of New Years Resolution items on sale. They’re all on sale for the one month that we think we can accomplish anything like quitting smoking or eating better just because we scream-slurred it out-loud in a drunken stupor at midnight while simultaneously smoking a cigarette and eating a bale of cheese covered something.

Even if you didn’t make a resolution to get more organized, people just naturally want to clean things up in January.  Clean up, clear out, dejunk. Getting rid of all the Christmas decorations gives your house a renewed sense of “Hey, this place isn’t so bad”, and you want to keep it up.

Since 2012 I’ve been chucking, heaving and throwing out 50 random things every January.  The Throw Away 50 Things idea was inspired by a book by Gail Blanke, Throw Out Fifty Things.  And every January I’ve tackled something different.  My junk drawer, my stack of warranties and instruction manuals, even my fridge and freezer have been subject to the humiliation of being stripped.

THIS year I had a lot of options.  The Ikea cupboards in my office are filled what I don’t even know what. Random bits of weird stuff that have no business being in the office of a busy, working blogger. Things like staplers and calculators and business cards. What the hell do I need those things for?  I’m a blogger, all I need is a pot of coffee, an Instagram account and a cutely posed cat. That’s it.

The other place of distress in my house is under my bed.  In a small house with almost no storage any available spot to put things is fair game.  My sister, Pink Tool Belt, found out how true that statement is when she helped me move my living room around at Christmastime.  Under the couch we found several iPad skins, a pillow, a birdbath, a laptop table and one prune.

I wasn’t even really sure what was under my bed anymore. For years I just shoved things under there until nothing else would fit, then I walked away never to retrieve a single thing from under there again.  I can’t really see anything under my bed but just knowing it’s there makes me insanely agitated. I hate it.  It bugs me.  I don’t sleep well just knowing a few inches beneath me lays a bunch of useless stuff covered in cat hair.  Also that under the bed spot could be a really cool fort for me. At the very least it could be a moderately comfortable hiding spot.

So under the bed it was.  I was fairly certain there wouldn’t be 50 things I could throw out from under there but clearing out the clutter under it would definitely be in the spirit of “Throw Away 50 Things”. 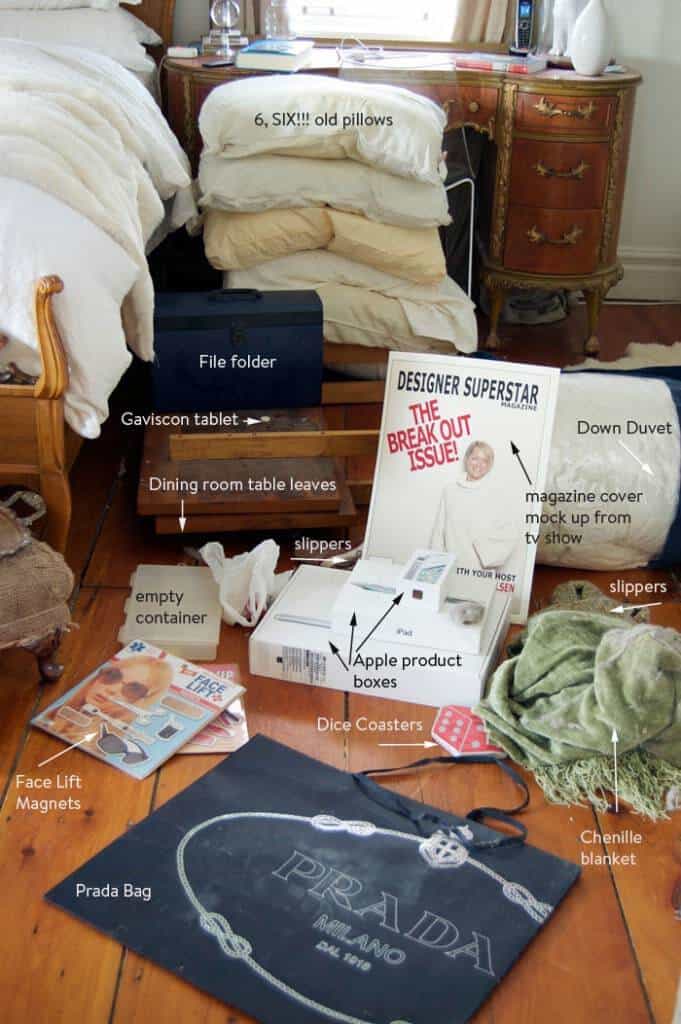 No idea why I thought I needed to keep the bag my Prada purse came in but maybe I thought if I saved up enough of them I could act out the Pretty Woman scene one day when someone at the feed store was rude to me.

Ditto for the Apple product boxes.

The down duvet is going to my mother, the super-fun plastic surgery magnets to a friend, and I ate the Gaviscon after realizing that Pretty Woman was released over a quarter of a century ago.  And then I decided maybe I should keep the Face Lift magnets for reference.

By the end of it all I dusted and washed the floor under the bed then slid the dining room table leaves back under the bed.  They just don’t fit anywhere else.

I will sleep well tonight knowing the cleanliness and tidiness that is beneath me.  This Princess has removed the pea. 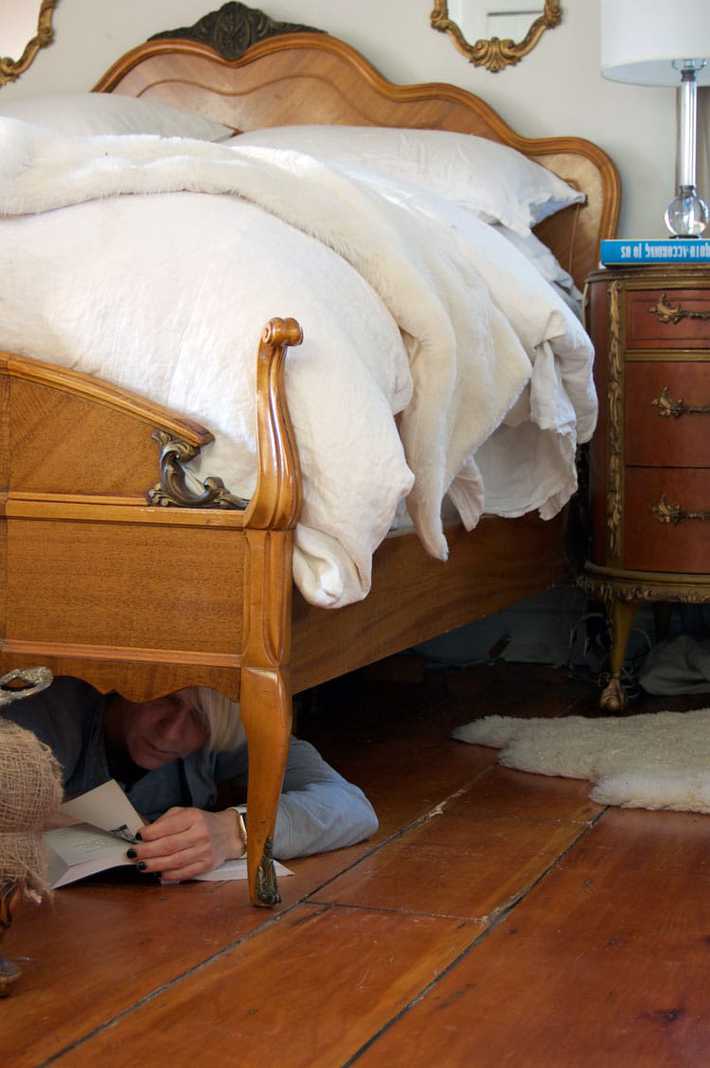 Now it’s your turn.  I would like you to pledge to Throw Away 50 Things (or clean out from under your bed) so you too can sleep well.

Let everyone know what you’re going to do in the comment section in case it’s some terrifically good idea that no one else has thought of so we can all do it.

Since the bed project went so well I might tackle my office tomorrow night after work.

And by after work I mean after Instagramming photos of my cat and coffee cup.