Last week I issued a bit of a command.  A challenge really.  I mildly suggested you might benefit mentally from chucking a few things.

50 things to be precise.  And chuck you did.  Chuck, chuck, chuck.   All around the world people were chucking stuff in a mad frenzy to regain control of their lives.  Also a lot of people found keys they though they’d lost.

So as promised I have a few before and after photos from Art of Doing Stuff readers who took part in the challenge.  I wasn’t able to include all the pictures that were sent to me and I’m sorry about that.

A lot of people seemed to tackle the dreaded junk drawer but some of you got really wild and headed out of doors to clean up garages and sheds and porches.  To the woman in North Carolina who got rid of all the garden gnomes on her neighbour’s front lawn … that’s not really allowed.

O.K.  Here we go!  A photographic ode to the chuckers … (by the way, for some unknown reason, looking at other people’s junk is fascinatingly entertaining.  Who knew!?  Other than the producers of Hoarders.  I guess they knew.) 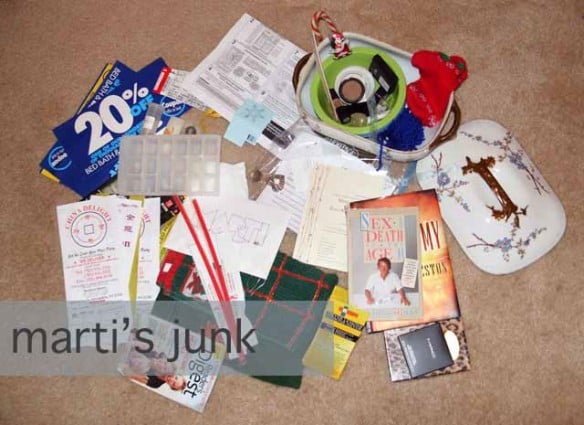 Marti wandered around her entire apartment gathering things to be chucked.  Yes the bowl is Limoge, yes she is chucking it.  Or Goodwilling it to be more precise.

Among other things, Michelle found some Betta fish food (her Betta fish died around a decade ago), a notepad in the shape of testicles and some Red Hots.  She ate those.  The Red Hots.  Michelle claims her legs grew 4 inches overnight and she can now speak Russian.  Plus she feels quite smug about her neat drawers. 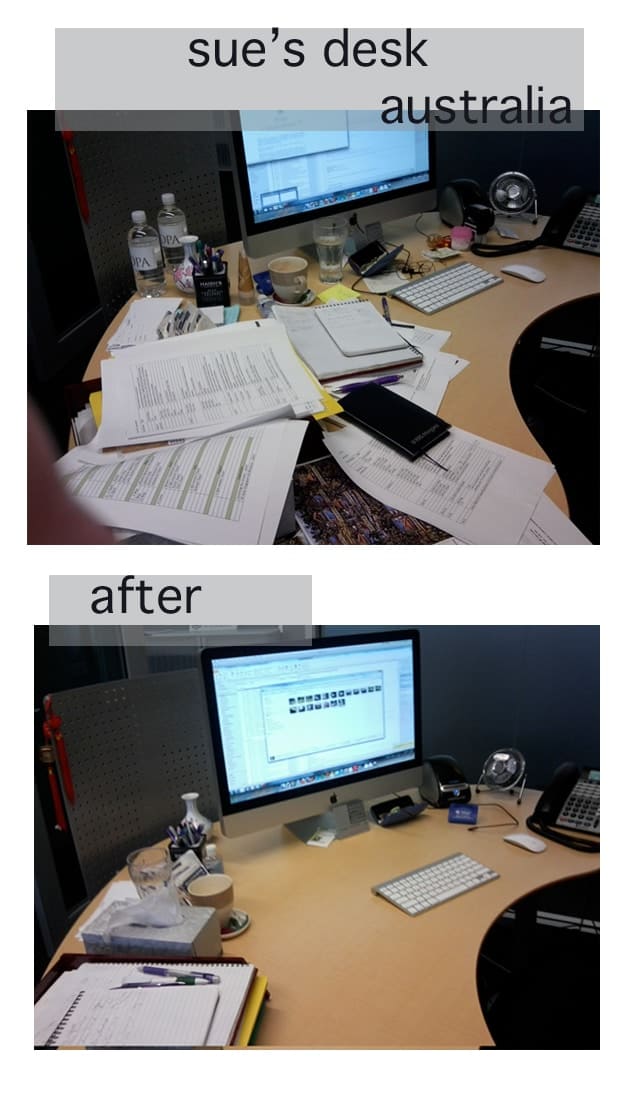 This is Sue’s desk at work. Sue had all that stuff on her desk because her drawers were so full she couldn’t put anything in them. So she threw out the liquor bottles and decorating magazines and was able to put the stuff from the top of the desk into the drawers of the desk. Now Sue just goes to the bar for a drink.  Don’t be fooled by those two bottles of water on the desk in the first picture … totally filled with Vodka.  I mean I’m just guessing, but it makes for a way better picture if I pretend they’re Vodka. Which they probably are. 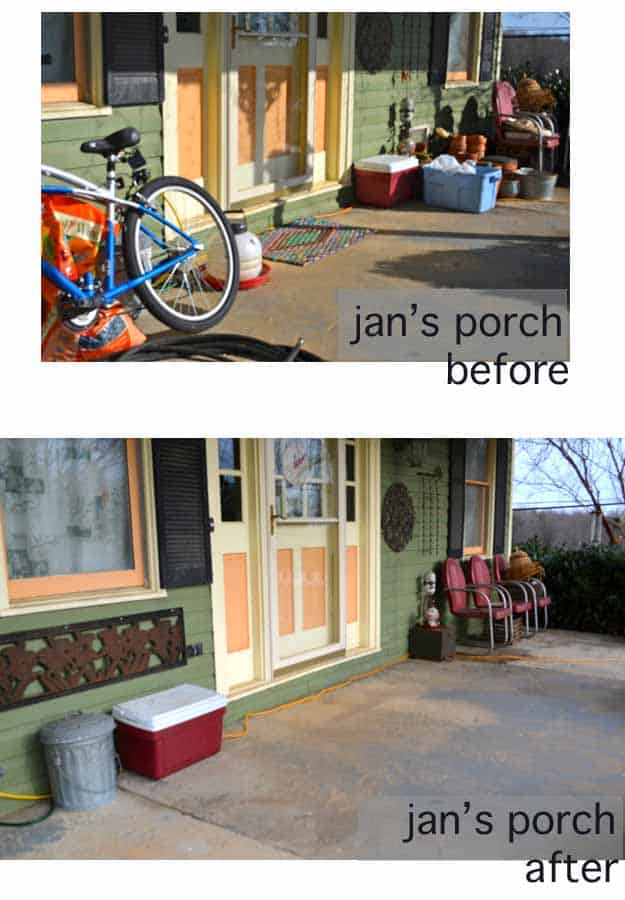 It’s a bit of a long and convoluted story, but for a while I thought Jan was a boy named Michael. It’s kind of a boring story so I’m not going to tell you about it. Jan had a choice. Clean up her crafts boxes or clean up the side porch. Since she loves to craft and wasn’t willing to part with crafty stuff, she tackled the porch. Which if I’m seeing things correctly, housed a chicken waterer. As you can see in the second picture, Jan’s chickens now get their drinks out of a chilled cooler by the door. Far more civilized. 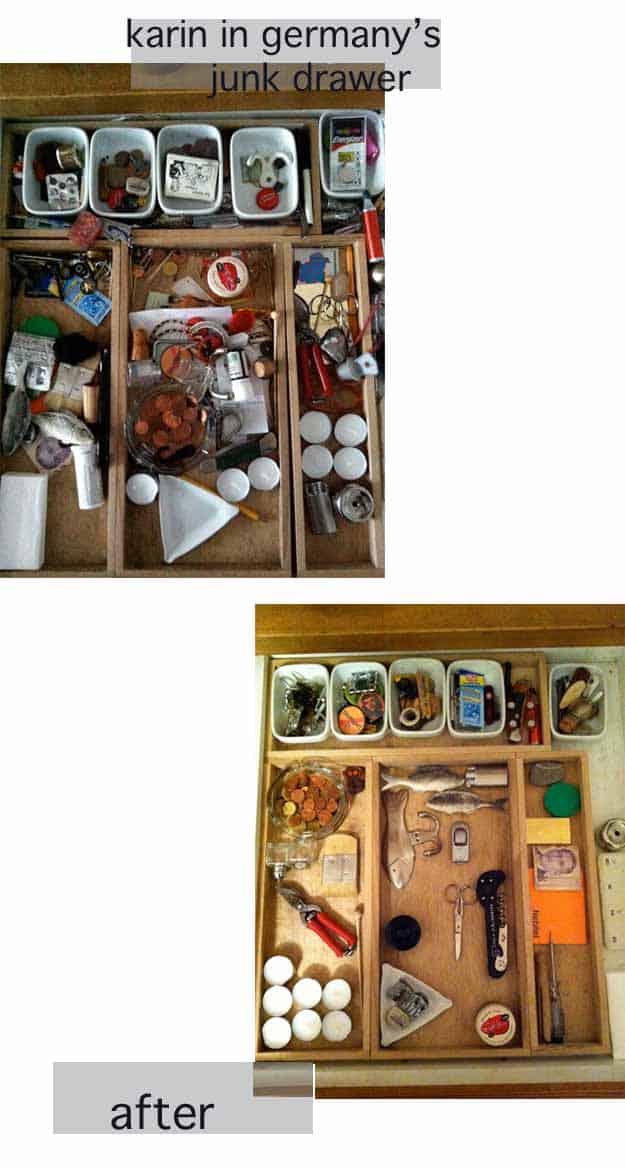 I don’t know what it is about Karin’s drawers that I love so much but I do. She has German junk, and German junk is clearly a lot nicer than Canadian junk. She has cool little fish and nice tea lights and pretty stuff. Her junk looks great. German’s have the best junk.

Hunter’s drawer looked like Animal from the Muppets threw up on it. Then she cleaned it out and it’s a thing of beauty. Plus Hunter won the Nobel Peace Prize the very minute she finished cleaning out her drawer.
Now we all know our junk drawers are going to be filled with junk again in anywhere from 3 months to 3 days. But that doesn’t take away from the fact that you tackled it. That for now, you are smarter, with longer legs, speaking Russian on your way to pick up your Nobel prize. And that in itself … is pretty darn good. Большое спасибо.