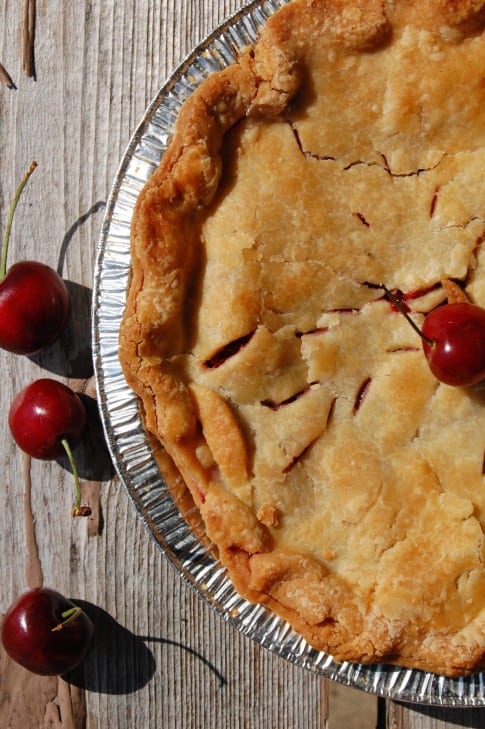 I am writing this emergency post from the cottage.

You weren’t going to get a new post for the entire time I was up here, but I’ve come into possession of some information that I felt it would be irresponsible not to share.

I am filling the gap left by the sudden demise of The News of the World.

I believe it is new information that has not been shared with the world before, and until now has been kept a discreet secret by a society not unlike The Knight’s of Columbus, The Illuminati and the Freemasons. Or those girls with bleached blonde hair who never seem to be in need of a touch up.

Are you ready? There are only 4 true pies.

This is according to my fella’s father who is up at the cottage with us. He’s full of this sort of information.

All other pies are faux, jumped up, pretend pies. He is serious. And not senile. And passionate about pies.

Here is the transcript of how I came upon this bit of information.

Me: I was wishing I’d brought a strawberry/rhubarb pie up to the cottage.

Fella’s Father: There are only 4 true pies I’m afraid.

1st. The truest of the true. The one true original. The King of pies … the ultimate true pie is “The Apple Pie”. No other pie comes close. It is acceptable to serve said pie with a piece of cheddar cheese the size of a roofing shingle. But nonetheless, not unlike the fact that there are several Royal Families of the world … there are other true pies.

Fella’s Father: Yes. And it has the added distinction of being the only blue food. I dare and defy anyone to contradict me on this.

Me: Uh. O.K. Are there seriously only 4 true pies?

Fella’s Father: What are you stupid? (Again .. I might be making this up)

Fella’s Father: The 3rd true pie is Cherry. (as seen above)

Me: What about Strawberry Rhubarb? Why isn’t it a true pie?

Fella’s Father: Well, I haven’t gone through the true pies yet. There’s one other true pie.

Me: Sorry. Yes? What is the final true pie?

Me: I don’t really agree with that choice. I’ve never even eaten raspberry pie. Honestly? That beats out Lemon Meringue Pie as a true pie?

Fella’s Father: (at this point I don’t even hear what he says but I can tell you it’s punctuated with flying saliva.)

Fella’s Father: You’ll notice there are no cream pies on that list. One of the reasons is that any pie that doesn’t have a roof on it isn’t a true pie. And with a lot of cream pies you just have a shell and some filling and no roof. That’s not a pie. They can call it a pie all they want, but that’s not gonna make it a pie.

Out of curiosity I throw a few other pies at him. To find out of they’re true pies. As it turns out there are a few honorary pies. Sugar Pie. (I debate him on this until he explains that it’s like a butter tart exploded out to the size of the pie) Pecan Pie. And Pumpkin Pie, altouugh Pumpkin Pie’s place on the list of honorary pies is fleeting. It gets a special pass as an honorary pie from Thanksgiving to New Year’s. I am told it will never ever be admitted to the pantheon of true pies.

Me: So what about the Strawberry Rhubarb pie? Honorary?

Fella’s Father: No. Definitely not. Neither strawberries nor rhubarb should ever be put in a pie and in fact, rhubarb, should never even be put on a plate. And lest people think this belays a small, narrow view of the world of pies … well … it does.

So. There are only 4 true pies.