I don't know why not a single one of you stopped me from renting another community plot when I said I was getting an extra one this year.  I now have two 40' x 20' garden plots to take care of along with my backyard, front yard vegetable garden and a persnickety half dead succulent in a pot.

For real. What's wrong with you people?  It's too much.  Why wouldn't you say anything?  I also have to plant the vegetable garden I forced my niece to grow last year and my mother's raised planter.  I'm not sure, but it's like you aren't even paying attention.  Seriously.  Why would you do this to me?  Bunch of snarklefarts you are.

At the time of writing this post I've managed to plant ONE of my community plots, get my strawberries and asparagus in my second plot and cancelled on planting my niece and mother's gardens 4 times.  Oh, and my front yard I haven't even touched yet, so, so much for turning it into the French Countryside Potager garden I envisioned.  At this point it looks like the kind of house you stayed away from as a kid because the person who lived there obviously ate kids. On the upside I think my succulent is almost dead enough to throw out.

There isn't a lot of growing going on in my main community plot yet but I do have 5 tricks I'm going to use this year that I thought you might like to try too. Even though I really shouldn't be sharing any fantastic information with you, what with you pretty much ruining my life and all. 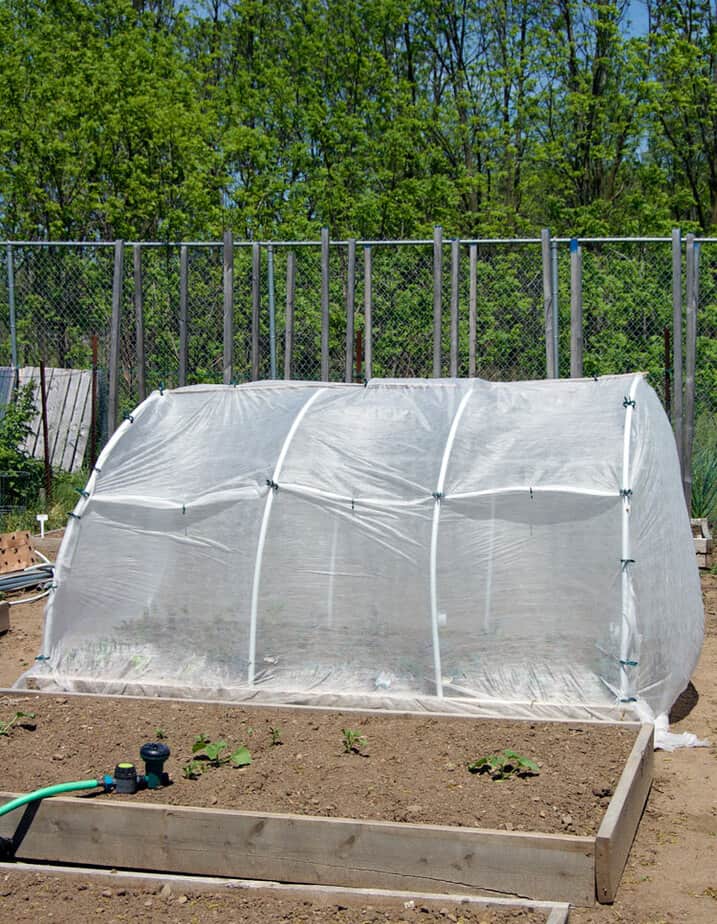 Suck on that cabbage moths.  If you read my blog you know the cabbage moth and I have a love hate relationship. I hate it and it loves all of the plants that I grow.  Dinosaur kale, cabbages, broccoli, swiss chard ... all of it covered by the second week in summer with tiny little green cabbage worms that stand up on their hind legs, look me in the eye and then slam back down into my brassicas mouth first.  It's not the holes they make in my food, it's the fact that they're the exact same colour as it which makes them invisible. So no matter how many times I wash it there's a good chance they're still hanging on. 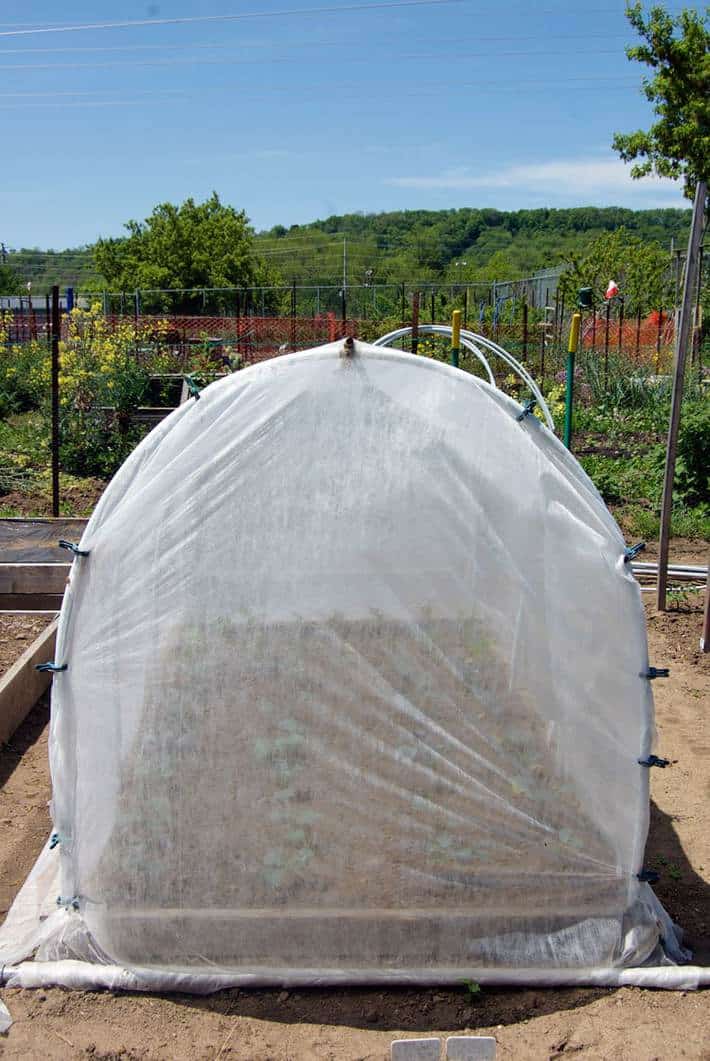 I've tried traps, scare tactics, kill crops, everything.  When none of that worked I decided this year I was going all out and building a hoop house to cover all of the my cole crops (also known as brassicas).  I'll keep you updated on how this experiment goes. I've built many hoop houses over the years but never one this big and never for this purpose.  I could just end up trapping in all the other bastard insects like Swede Midge, guaranteeing the death of all my crops, not just cabbage moth holes. 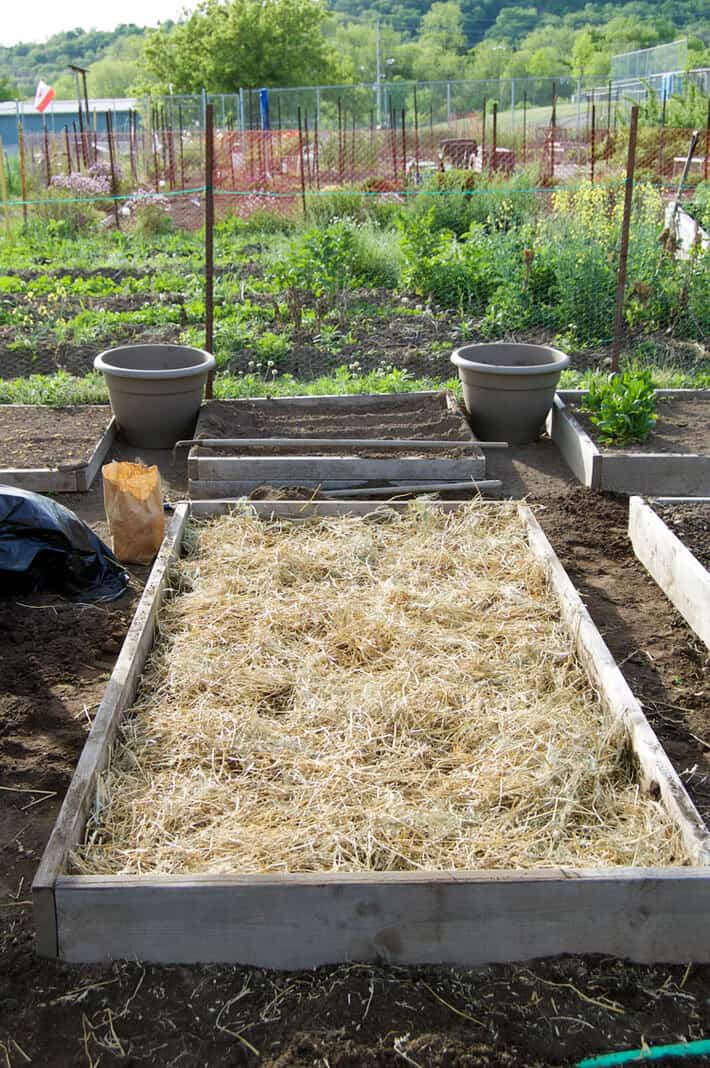 I've grown potatoes in straw before and it was a complete disaster so don't even ASK me why I'm not only trying it again this year but I'm solely using this method.  It's a type of straw bale gardening where you don't use soil to grow, but straw.  You plant your potato in a trench of nice, loose soil and then hill it immediately with 6 inches of straw instead of soil. Then you continue to hill with straw.  The logic is the straw is good for keeping weeds down, keeps the light out that would turn the potatoes green and most importantly makes the potatoes MUCH easier to harvest. You just pull the straw away and don't need to use a fork or shovel.

Last year I hated digging up my potatoes so much I laid down in the dirt, threw a hissy fit and cried.  Then I ate a kid.

I've done my research and potatoes grown in straw DO have a lower yield than potatoes grown in soil BUT you don't have any potato loss because you can easily find all of them and you aren't stabbing and injuring any of them with a pitchfork.  To make up for the possible loss in yield I'm just going to plant more potatoes. 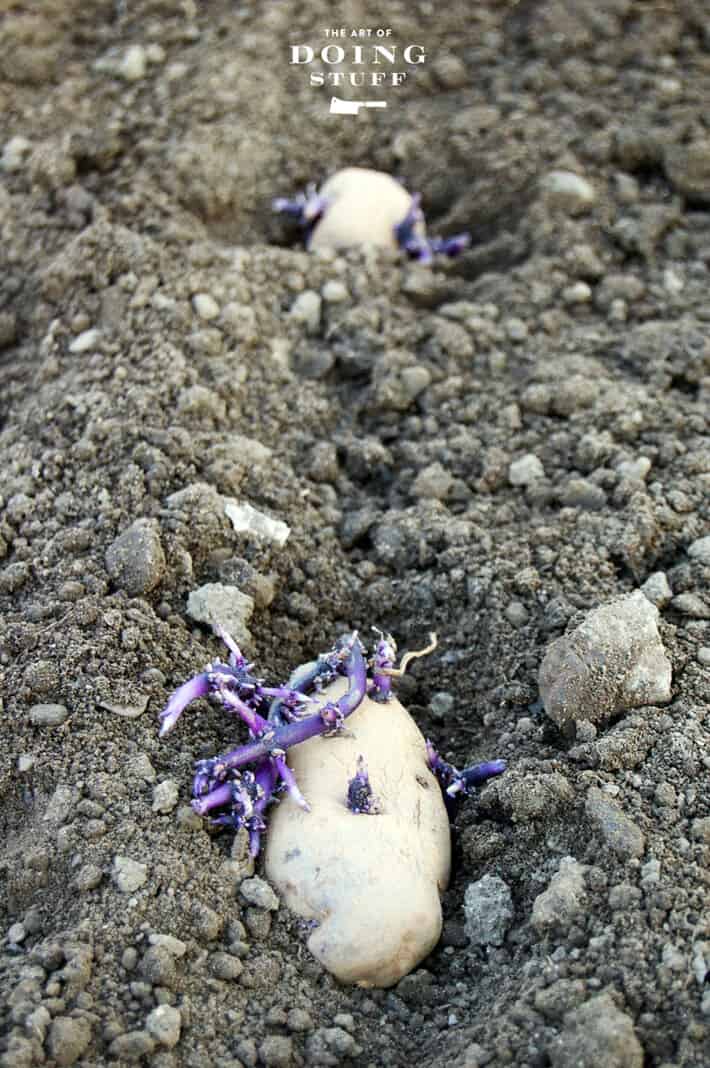 The most important things for a high yield in potatoes is making sure the soil is cool. Potatoes don't like hot soil. So I'll dig a trench as deep into the soil as I can when I first plant them. The deeper down you dig, the cooler the soil which is especially important since I'm planting my potatoes WAY later than I should be so the soil is warmer.

The one problem I had with straw when I originally planted them in straw was the fact that straw really, REALLY holds in moisture.  I had planted them in peach baskets which maybe didn't drain enough and I really packed the straw in. The vines all just kind of rotted. I was angry.  So I ate a kid.

This time I'll loosely scatter the straw and I might water the potato beds with soaker hoses that won't get the straw wet, which should help with that problem.

When did I get so serious?  I'm so serious when I talk about gardening tips. 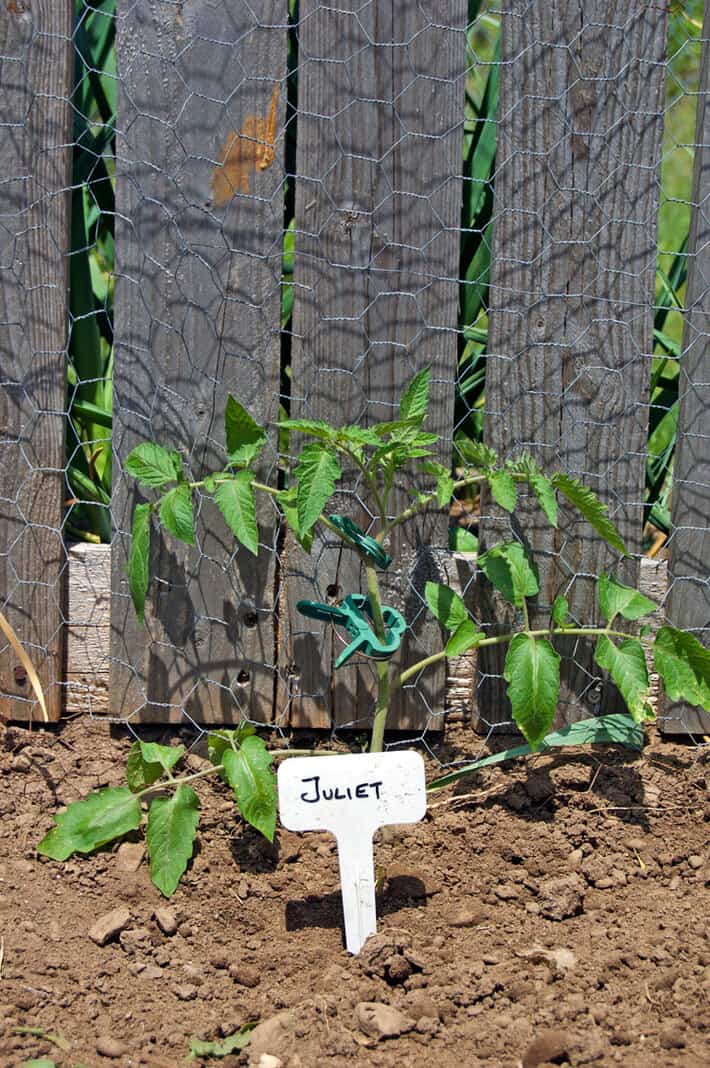 This one I'm not convinced will work at all based on how tomatoes grow, but I'm going to try to espalier a few tomatoes along my garden fence just like you'd espalier a fruit tree.  So the tomato will grow flat against a wall or fence with the the lateral branches flat.  They'll take up less space, get a ton of sun and air flow, and hopefully grow healthy tomatoes less prone to disease.  Although as I mentioned at the beginning, I'm not convinced this will work but I sure am excited to try it.

Wow.  Now I'm not only serious, I'm pretty dorky when talking about vegetable gardening.  If you're new here, I'm normally more entertaining than this.  I swear.  So please give me another chance. 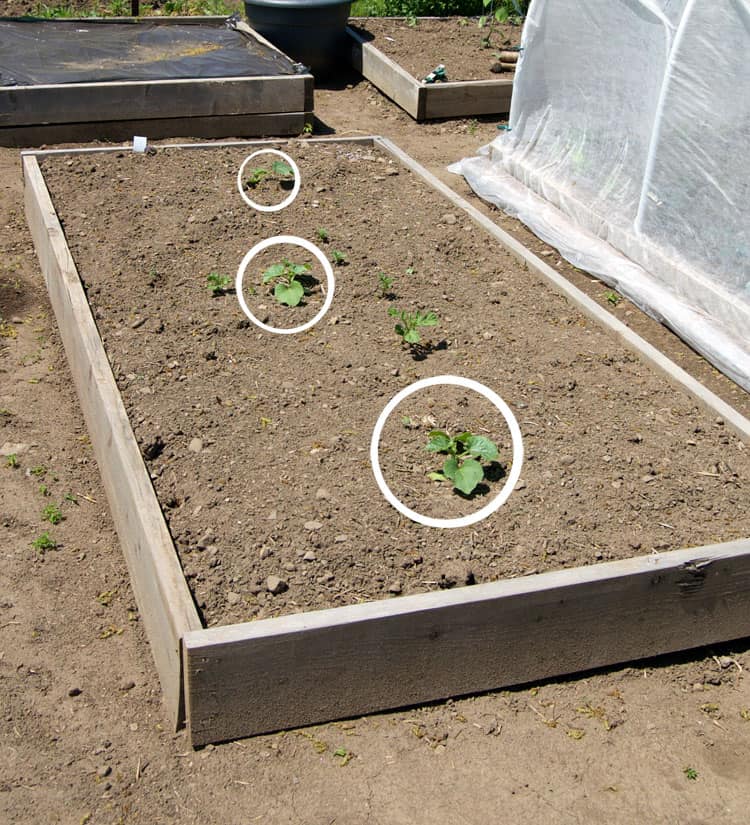 The circled plants are the Honeydew. The rest of the plants are potatoes I missed digging up last year that are now growing!  Which is why I'm trying the easy dig straw planting method.

This isn't so much a trick as a test.  I grew cantaloupe years ago in this zone when I was a teenager (because yes I was an unfunny, needy, vegetable dork as far back as then) and as far as I remember it was a success.  So honeydew can't be that different can it? My little niece that doesn't like me (although I'm growing on her) wanted to grow cantaloupe so I gave her a section in my garden for cantaloupe and dedicated another section to trying Honeydew. Which everyone knows is much more delicious than cantaloupe.  Also easier to spell. 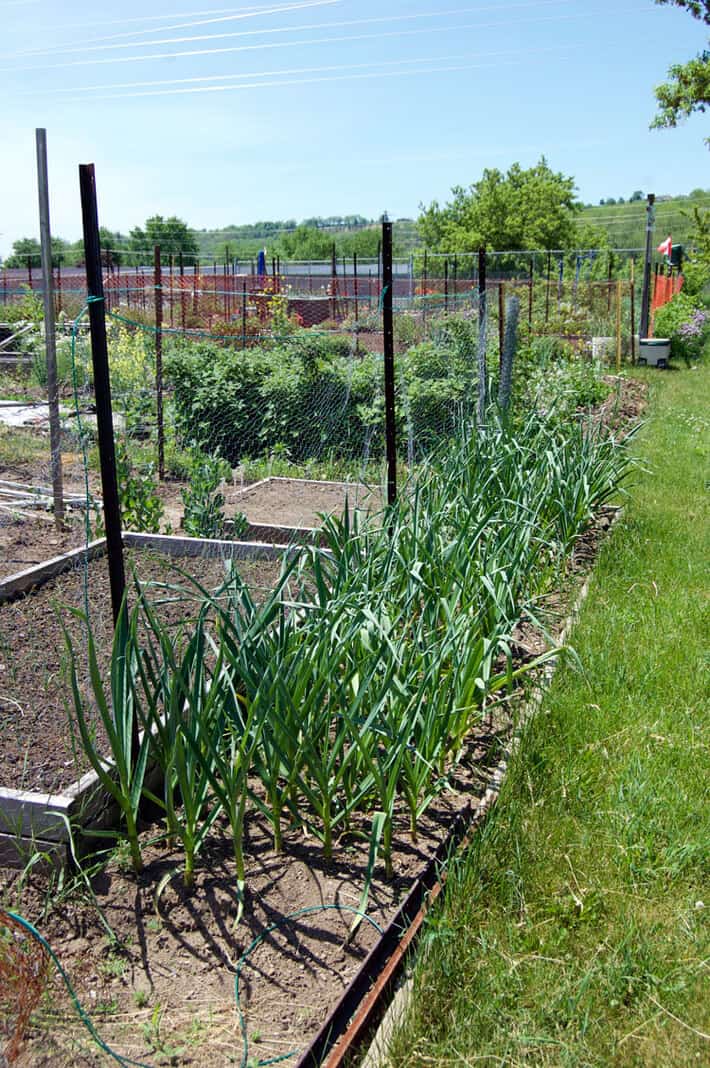 This is another risky one, but I'm going to have a safety net just in case.  A lot of people don't have the opportunity to rent huge garden beds like mine. Or they have reliable true friends to talk them out of it. Either way,  they have a regular backyard vegetable garden which only has a certain amount of room and that means having to choose what you really want to grow.   But if you think about it a little bit and time things right you might have a lot more garden space than you think you do.

Lettuce croaks as soon as the weather gets hot so all the room that lettuce was taking will be available for something else that loves the heat.  That means when the lettuce bolts in the middle of June you can take that space to plant your zucchini which will still have plenty of time to grow.  This year I decided I could save a lot of gardening space if I waited to plant my squash until I harvested my garlic. I'd plant the squash in the huge bed I pulled my garlic out of.  I'll also be planting some squash over in my second garden so I won't be squashless if this experiment doesn't work.  But if it does, then I know for next year that I can save a whole lot of space by delaying the planting of my squash.

Yeah, but for real. just to reiterate, I'm normally really entertaining. I mean I once nearly killed my sister I'm so funny.  If I'd thrown in a knock knock joke, she'd be as dead as a head of lettuce in July.