Home » Everything Else » What a blogger’s house is *really* like. 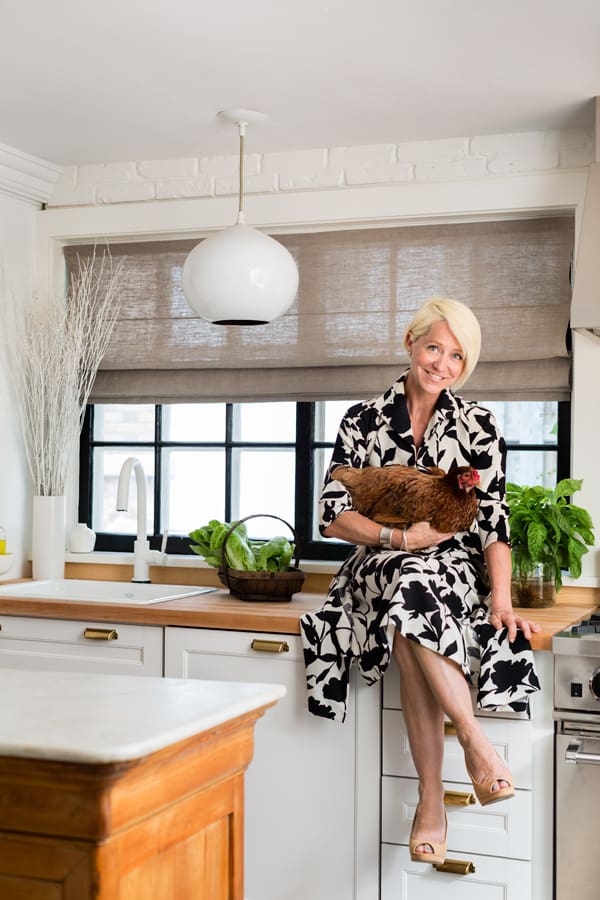 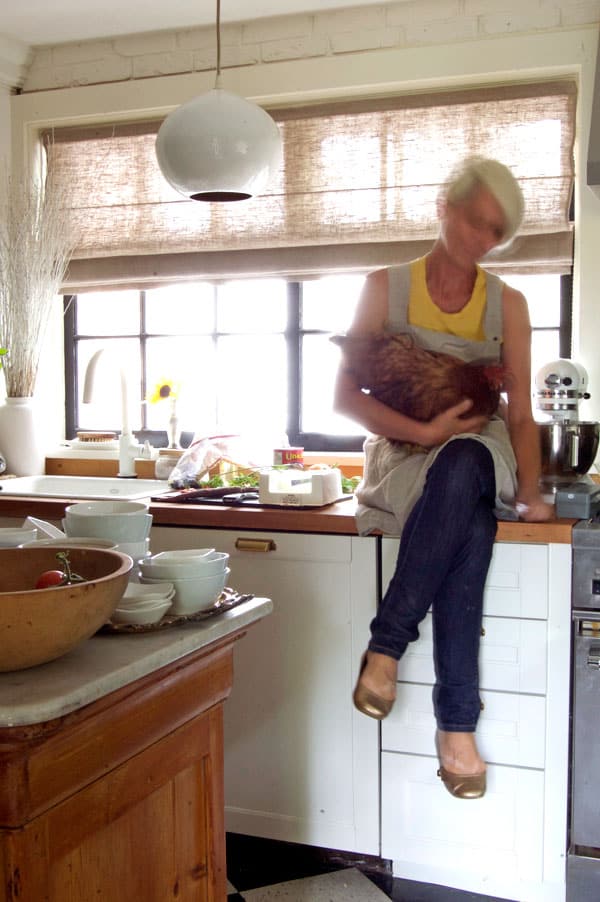 I’d give just about anything to live like Photo Karen.  She has a great house with a clean kitchen and wears dresses and heels throughout the day.  Her life is perfect; when captured in a photograph.  Otherwise?  She’s pretty much a mess.  I’d wager that most other blogger’s homes are the same.  Their homes have the ability to look FANTASTIC, but most of the time they’re like everyone else’s.   Blogger houses;  the supermodels of the Internet age.

The odd time my house looks as good as it does in my photos, but most of the time, because I’m a DIY kind of blogger, my house looks like a life sized science experiment.  I’m doing, I’m blogging, I’m experimenting!  You can’t keep a neat house that way. In fact don’t trust a DIY blogger who says their house is always neat and tidy.  Either they’re lying through their teeth or they don’t actually DIY.  Either way they’re lying actually and therefore shouldn’t be trusted. 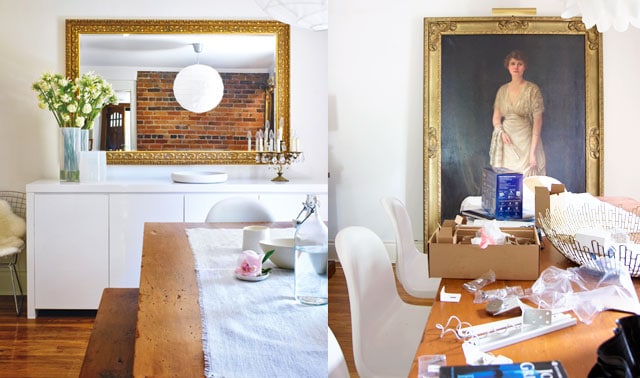 90% of the time I’m in some sort of disaster because of some sort of thing that I’m doing.  You can’t possibly do stuff all the time and not have your house reflect that. It just isn’t possible.  In the case of the dining room table in the above picture, I’m getting ready to send back my chicken coop door opener that didn’t work.  So, of course all the parts are all over the dining room table.  Which wouldn’t have been too much of an ordeal, only I also decided for some bizarre reason that the exact same moment would be the perfect time to declutter my buffet.  So any part of the table that isn’t covered by door parts is covered by chipped serving pieces and random objects that I, at some point, shoved into my buffet. Like a John Grisham novel. Or 12. 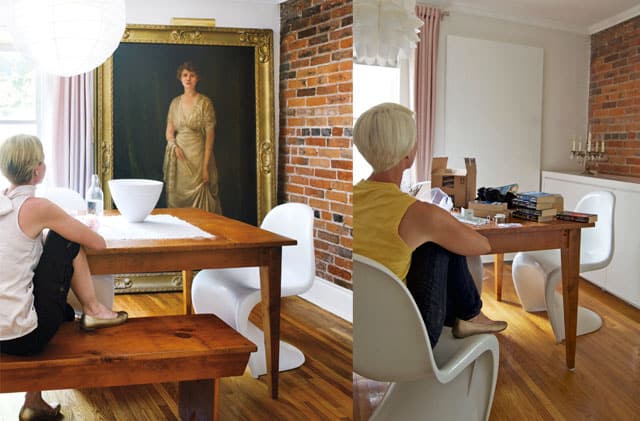 There she is!  Photo Karen again!  She’s relaxed and gazing at her life-sized portrait of Margaret, the Scottish woman she bought at an antique auction.  They’re sharing a joke or a secret recipe.

I’ve changed my dining room around since this particular magazine shoot so things look a bit different by the way.  Because that’s another thing I’m constantly doing.  Changing things around.  Even so much as bringing a single new can opener into the house is cause for rejigging, rearranging and reorganizing pretty much everything.  Sometimes it ends in tears.  You too?  That’s normal. 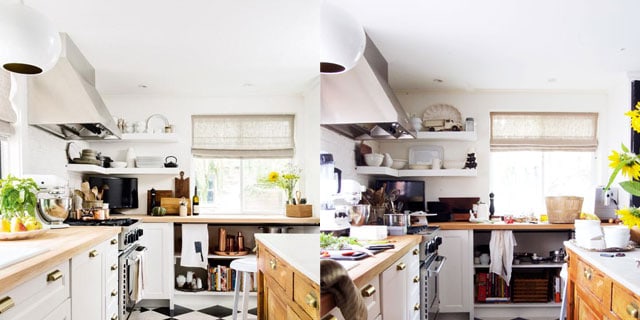 Maybe it’s just because the photos are smallish but the kitchen looks remarkably similar in the magazine photo on the left and the real life version on the right. I also attribute this to Canadian Living Magazine, which tries as much as they can to show houses as they really look.  They don’t primp and prod and get rid of “stuff” the way some other magazines do.  A lot of other magazines would have had me take the stand mixer and the television out of the kitchen for the sho0t for example.  The picture would look better without the big black block in the corner but when I mentioned it to the home editor who was here for the photo shoot at the time, Brett Walther, he said No, that’s how you live. That’s how people live. They have televisions in their kitchens and they’re ugly blobs, but they exist and we should show it and anything else would be a lie I couldn’t bear to live with. So No, NO Karen you and I … we will INSPIRE a nation of cooking television watchers that they can show their big black boxes off, and be proud of the fact that they can defrost AND watch Jersey Shore reruns at the same time. Praise God.

I should let you know I’m probably paraphrasing there. 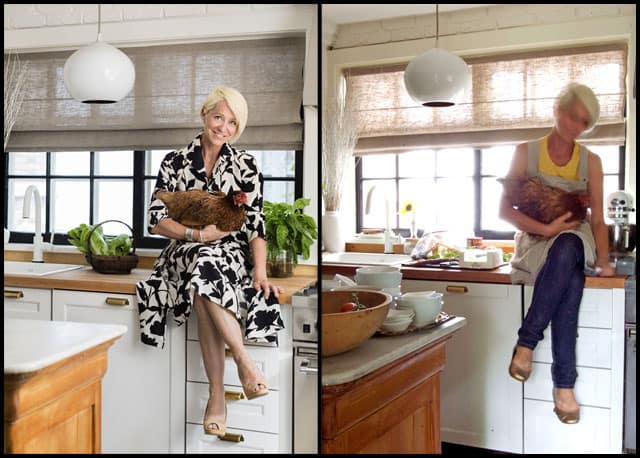 I may have exaggerated Brett’s comment about the television but I got the sentiment right.  People live in their homes.  Bloggers included.  So, yeah my house, more often than not, looks a little more Oscar than it does Felix.  There’s always meal prep on the counter, fermentation experiments going on under it, things to be returned in the foyer, something that needs fixing on the dining room table and a piles of laundry in various stages of distress around the house.  But who cares?

It drives me MENTAL.

But what are you gonna do?  I do stuff and doing stuff makes a mess.

I gotta be me.