Menopause, shopping for cannabis with my 84 year old mother, and the wheels falling off.  Also I tried another YouTube hair curling tutorial. So yeah, shit went down this week. 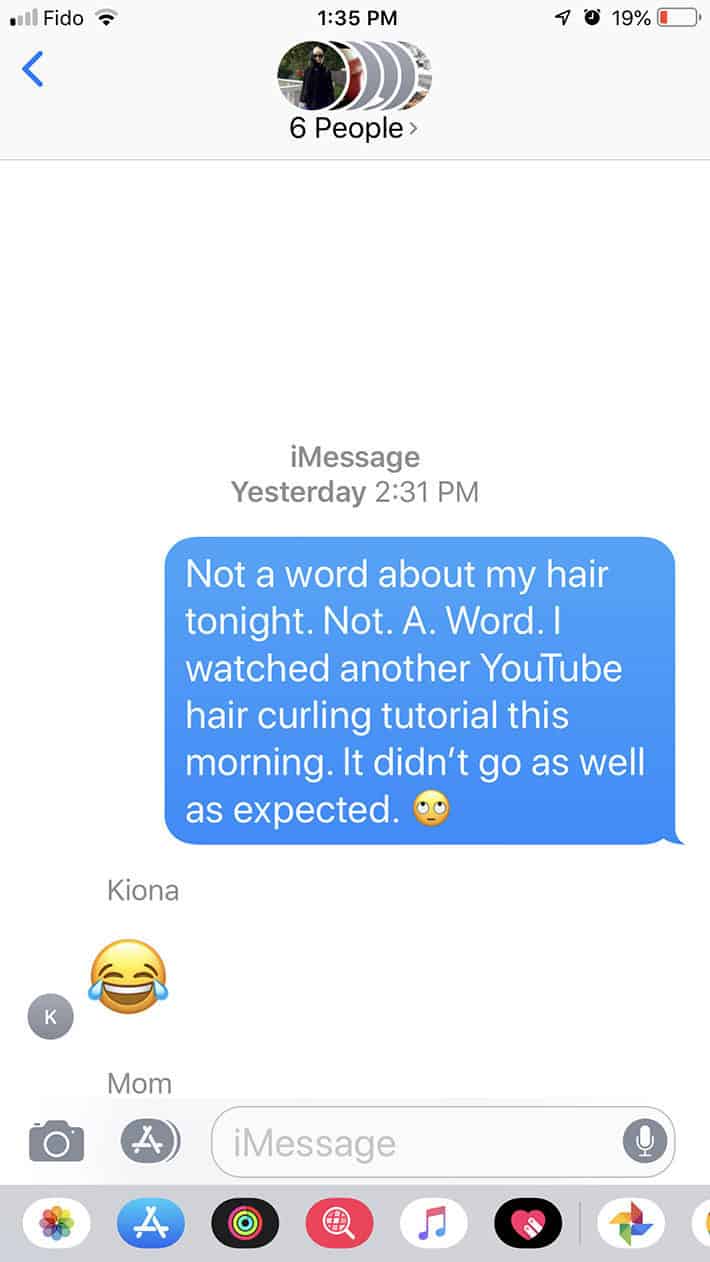 I spend one hour each night watching television.  Mostly dark series like Killing Eve, Ozark, or Shameless but none as detrimental to my hair as a Hallmark Christmas movie. I blame the Hallmark franchise of Christmas movies on this ... 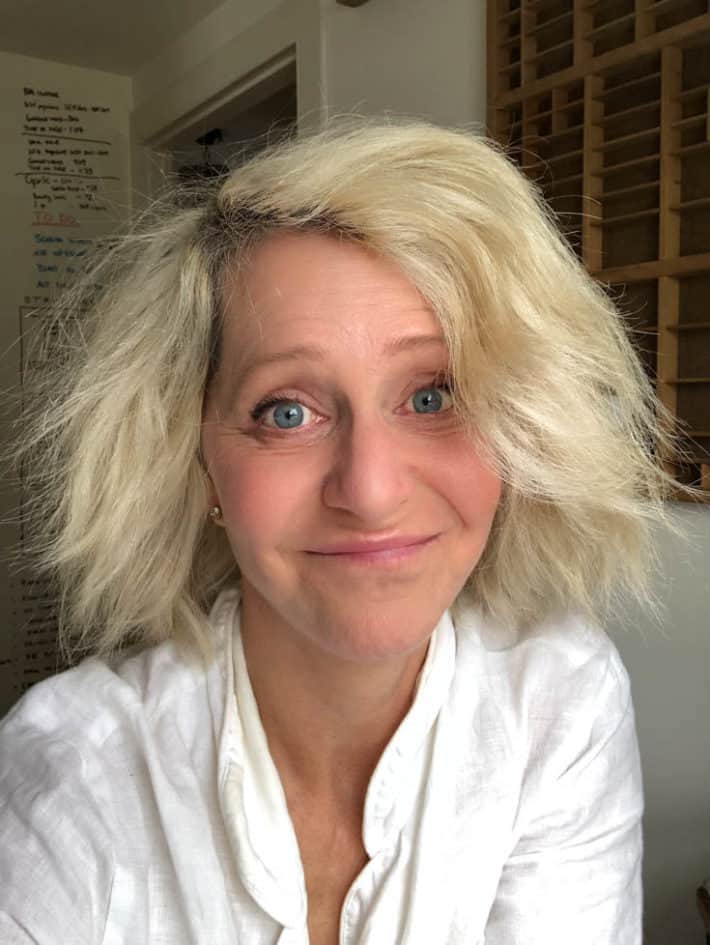 It starts in November, and by December I can't help myself.  I wake up one morning and decide I'm going to have to curl my hair. It's not a thought so much as a compulsion after watching hours and hours of Hallmark starlets, with a head full of not too uptight, not too loose curls. I've never liked curls. They're too curly for me. I've never liked Christmas sweaters, dainty necklaces or saying Oh Gosh but after a month of watching I enter what I assume is some sort of Hallmark hypnosis.

This is how I end up curling my hair. Once or twice a year I give it a shot, it fails in a rather epic way and I walk around for the rest of the day as if this is a totally normal and good look for me. The next morning I retire the ambition of curls until the next round of Hallmark seasonal movies comes on television.

I want to make it clear that I don't blame Hallmark entirely, I blame YouTube beauty Vloggers.  Specifically the ones who do hair tutorials, upload them, and expect me to be able to replicate what they do. Last time I watched a video on doing a type of rag rolling technique in order to look exactly like Charlize Theron.  You can see the startling results of that here.

This time, I wanted to dry my hair with a diffuser to easily bring out "the luscious natural curls that were just waiting to blossom from my head". That was the description. So that's what I did. I diffused and diffused and diffused with my billion dollar hairdryer until I flipped my head back up and saw Nick Nolte staring back at me.

I would never have even tried to achieve head blossom curls even a year ago but something's changed in that time. I think my meno is pausing.

I had some blood tests last month that I think confirmed it.  I'm not entirely sure because my doctor didn't walk me through the results. I read and interpreted the test results myself online. My doctor is retiring at the end of the month so if you aren't scabbing up from some sort of radiation poisoning, she's maybe not going to get back to you.

If it's true, this would ALL MAKE SENSE.   I have had a bizarre series of random symptoms (including the gut wrenching anxiety that started earlier this year) over the past several months. None of which I've ever heard of as being related to menopause.

Want to know why?  Because menopause is relegated to the same level of medical concern as "my kid stuck a peanut up his nose." The only time I remember any sort or real discussion in public about menopause was when one study thought maybe hormone replacement therapy could give you cancer and all the doctors stopped prescribing it giving us a world of 45-60 year old women screaming their way through a medical crises with no medical help at all.

Don't think going through menopause without hormone replacement therapy is a medical crises?  Picture this conversation:

Doctor:  Hello man person.  You had a heart attack, you might have had a stroke, I'm going to have to remove both your arms and legs and you have cancer in your eyeballs.  And oh yeah, it looks like all of your testosterone is gone.

Turns out the whole women shouldn't use hormone replacement therapy thing is pretty close to bullshit by the way.  More on that in an upcoming post I plan on writing called Hey menopause, what the f*ck?

How this relates to hair curling, is that one of the things that can happen during menopause is your hair can go from straight to curly. Or in my case straight to curlyish in the back and sort of just weird in the front. I figured with these random curls that started naturally blossoming from my head all I needed was a diffuser to enter my Hallmark movie life. You can see from the photo above that this is yet another time I was very, very wrong.

This possible menopause thing is probably what's also causing my anxiety. I got it back in February and thought it was because of the health scare I went through. But now that I'm sort of connecting all the dots, it seems like menopause might be the asshead in this scenario.

I gave CBD oil a shot and thought I noticed it helping a little bit, but it's so hard to tell because it takes a while for CBD oil to take effect in your system. I stopped taking the CBD mainly because of the cost and because I really wasn't 100% sure if it was doing very much. A few months later I noticed my anxiety had gotten really bad and I started taking it again it. It does seem to help, but I wouldn't say that CBD is the magic drug it's touted at yet.

That realization led me to meeting my 84 year old mother in the parking lot of my local pot shop. She has a fascination with anything different or interesting so I knew if I told her I was going to the new "drug store" as I call it, she was going to want to go.

I wanted to see if they had some strain of pot or something that would help me calm down before bed and sleep. I'd been waking up relentlessly with panic attacks for months and I was exhausted.

Her bravado ended the minute we had to actually walk through the parking lot and into the small drug den  with the cheery yellow "Hello Cannabis!" sign out front. She refused to show the attendant her identification as is required when we walked in.  When she realized he really wasn't going to let her in without showing it she basically waved her wallet in front of his face and said There. You saw it. This is stupid.

And just like that my mother had made another friend.

We went in and stared blankly around. It's set up like a 1980's catalogue store with a long counter of sales people ready to grab something from the back for you, and a row of tables down the centre of the room where you can flip through their online catalogue and fill out a request form for whatever you want.

Looking up, I saw my neighbour Wayne behind the counter and he waved us over. Betty was in it now. 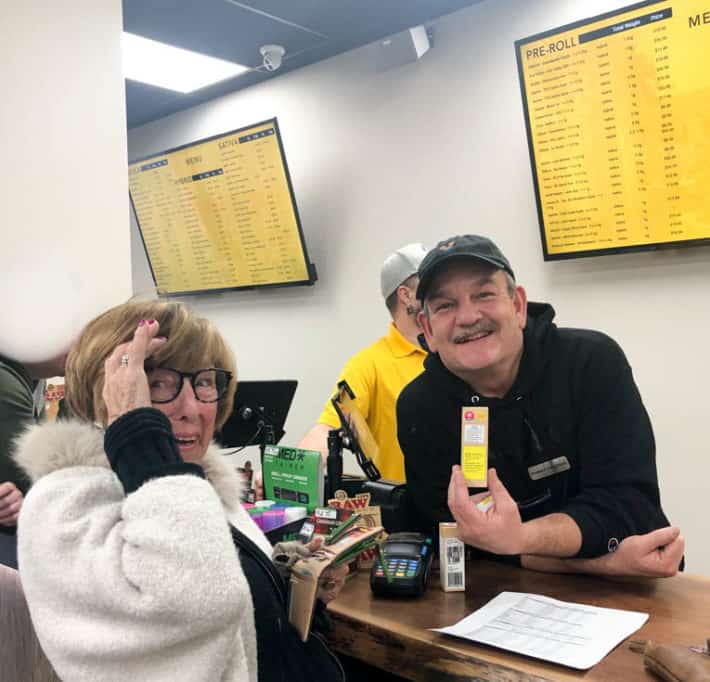 I told her to relax. I imagined she was worried someone would see her there, but I reminded her that if they were seeing her, she was also seeing them. That calmed her down some. Once she realized it was a store like any other that she could browse for home accessories in she let loose. 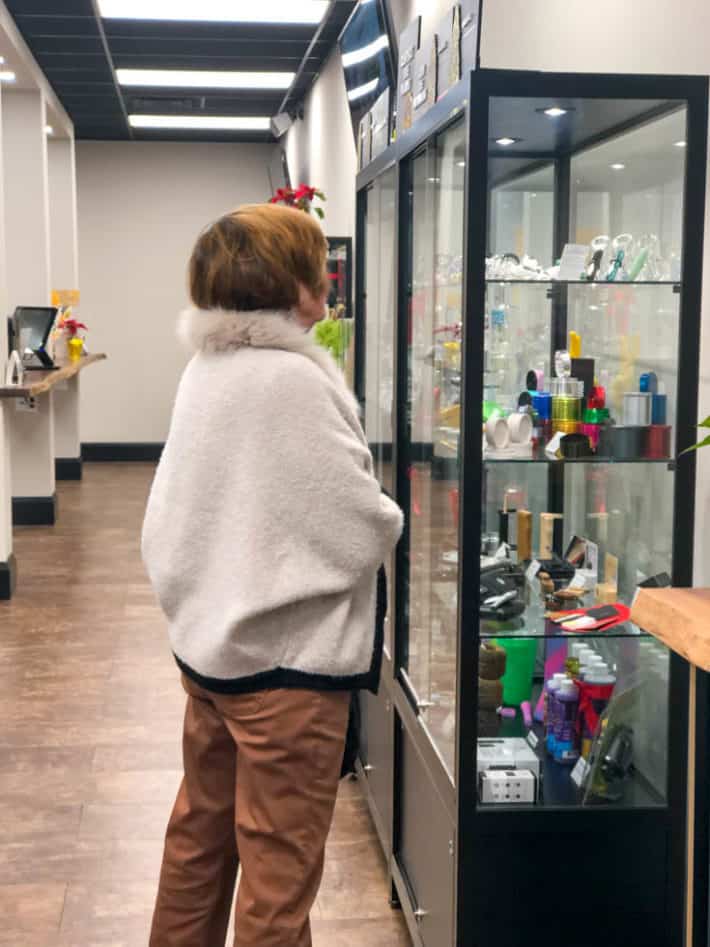 It was quite a mother daughter day. Daughter buying a couple of THC and CBD options for debilitating menopausal anxiety, mother contemplating if 1 or 2 handblown glass pipes would look better as a coffee table accessory. 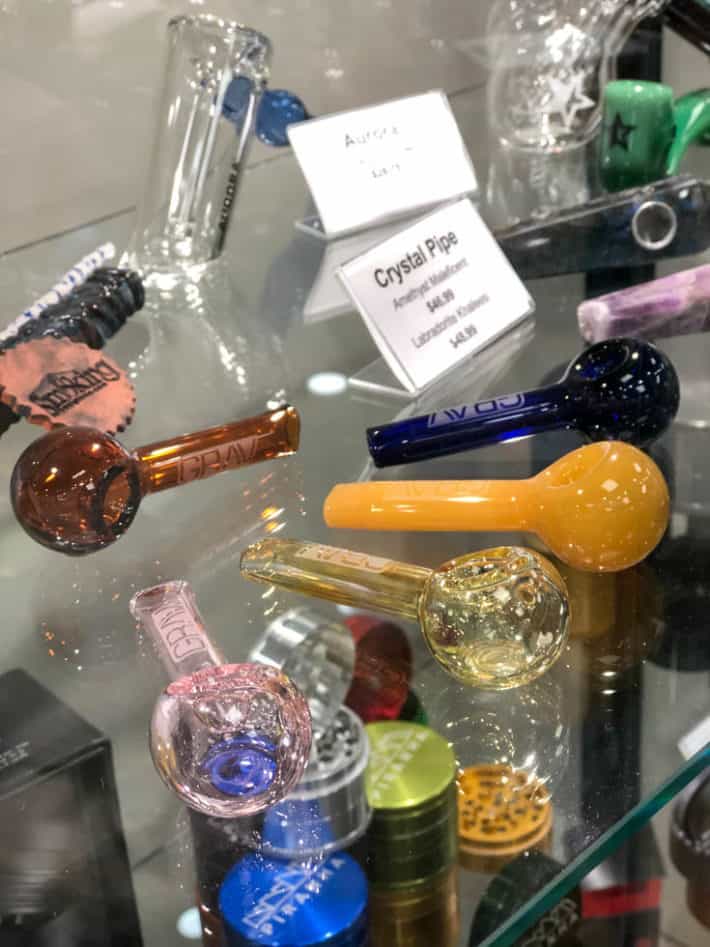 We put on the THC virtual reality glasses ... 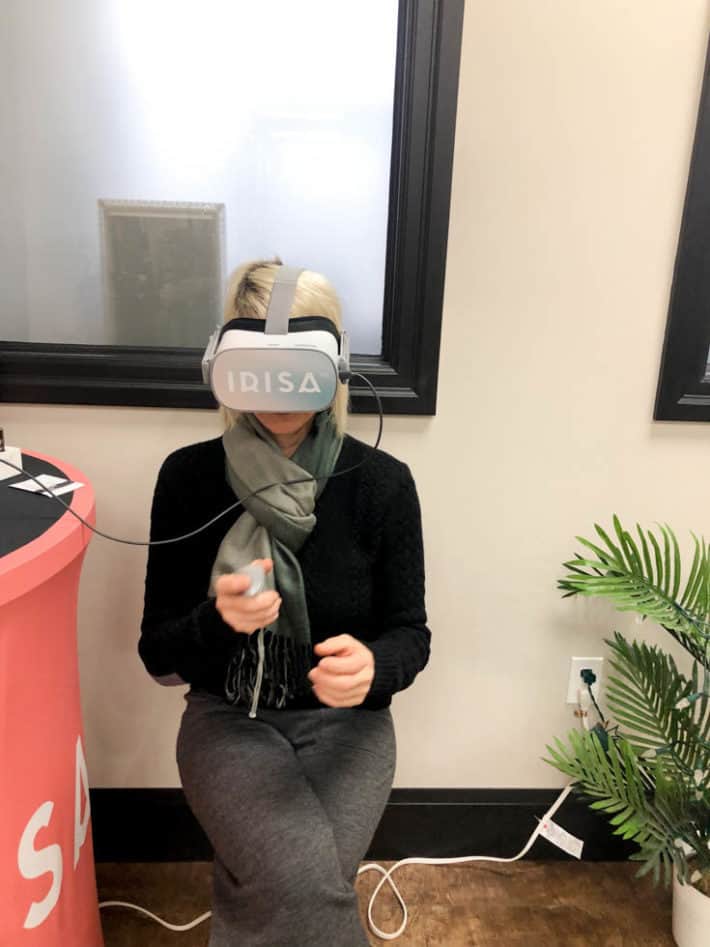 .. and discussed the paintings that were displayed in the outer room.  She liked them. Wondered if they had anything to do with pot. Other than the bright colours, they did not.

In the end I had to drag her out of there. My mother liked the new experience. Next month I'm thinking of taking her to visit someone in jail.

Last Tuesday I walked to the grocery store at night with my antique wicker market basket. As one does.  If they're an idiot.

I've done it once before and loved how much easier it made walking home with groceries. And also so much more stylish than a regular bundle buggy. I mean I might be going into menopause but I'm not at the bundle buggy stage yet. 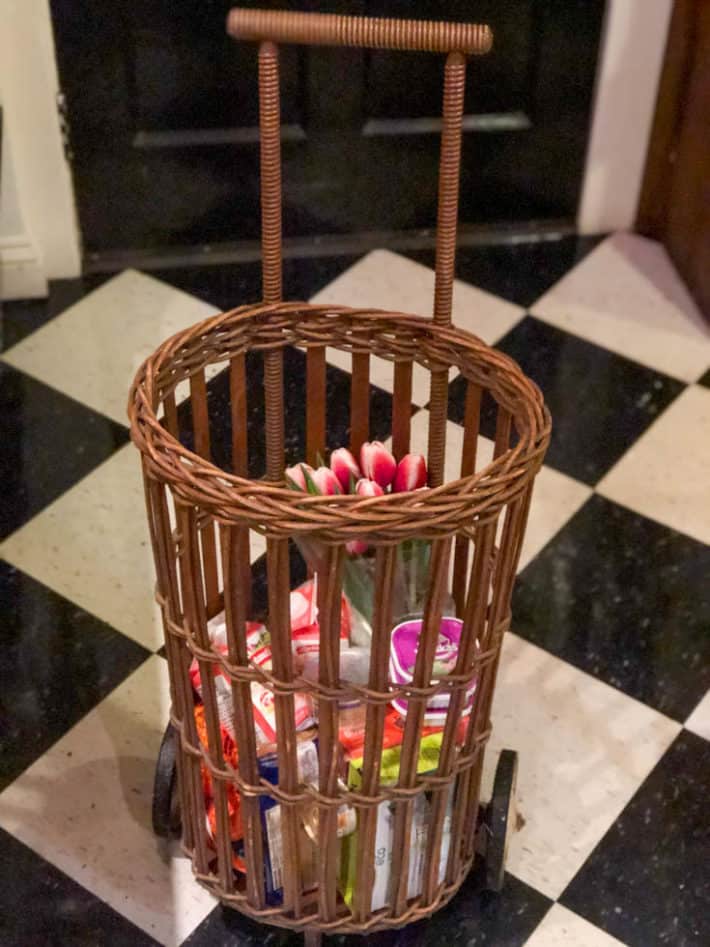 Just as I was in the middle of crossing the road at a stoplight, my wheel fell off.  Which would have been bad enough. But I didn't really notice it even as I was suddenly scraping my cart across the road. When a spark caught my eye, I looked down and noticed one wheel was back near the sidewalk curb and all that was sticking out from my market basket was a metal axel.

By now the crosswalk light was in that alarming state where it counts down how many seconds you have left before being run over by a car. There wasn't enough time for me to make it to the side I was headed towards so I had to turn around, in the spotlight of everyone's headlights, lift my market basket and hobble my way towards my wheel.

This was all on the way to the grocery store, so I didn't have to worry about getting all the way home on one wheel. The basket was carried to the store where a cashier gave me the one thing that can be used to fix anything.  Duct tape.

Wheel attached, groceries purchased, I made my way home with my duct taped cart, reminding myself all the way that if this were a Hallmark movie a handsome lawyer/rancher would have hopped out of his truck to help me with my market basket situation.

And my hair would have been curled.