O.K., let's see, in the past couple of weeks alone I've taken Betty for her COVID vaccination, worried that my 94 year old friend David was dead, went to a drag show in Portugal (yes really during the pandemic I did this) and alarmed a lot of people on Instagram. 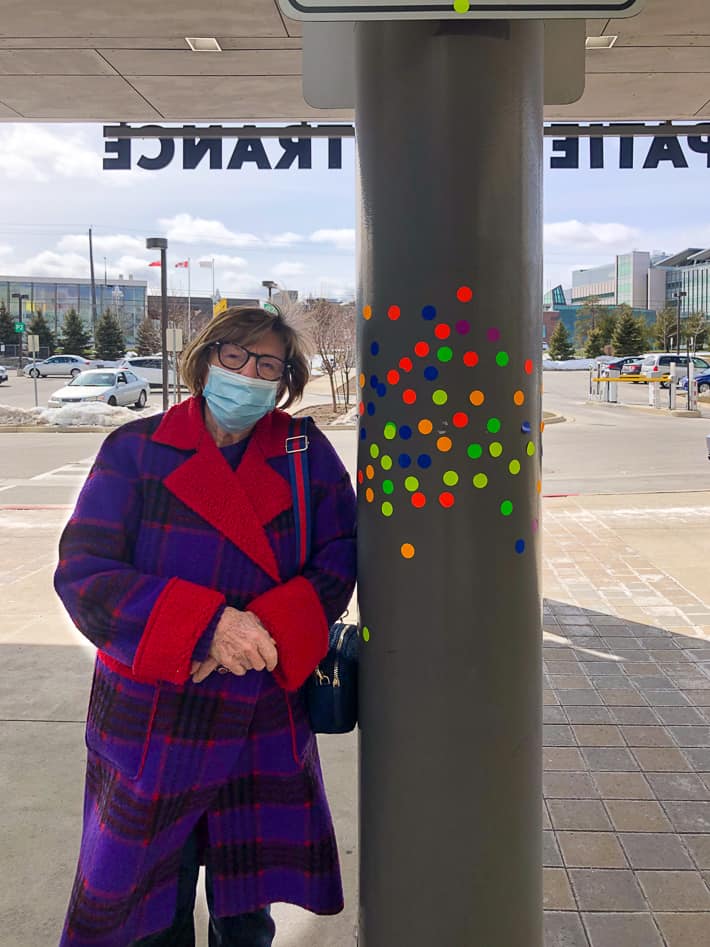 Everybody say hi and congratulations to Betty who got her vaccination exactly one week ago. No seriously.  I beg of you to congratulate her.

You see, Betty wasn't all that interested in getting the vaccine.  Not because she's opposed to it from a medical perspective, but because it was going to cut into her very strict regiment of waking up, doing nothing for 5 hours, going for a walk around the block, and then doing nothing for another 5 hours.

I get it. We all have busy lives but the vaccine is something you really want to think about making room for. Since we all knew Betty was not going to take charge of getting the vaccine herself, I was given the job.

This involved calling the hotline to register her.  Our city is currently vaccinating people over 85. Once they get done (they could actually be done now) then the 80 year olds get it and so on until the only people left to be vaccinated will be the ones who recently nursed their children back to health after a bout of whooping cough followed by a pesky case of measles.

No problem. Having grown up during the age of the telethon I can work a phone like I was born to be sweated on by a rapidly fading Jerry Lewis.

I called the hotline like someone who has been using a telephone all her life but the phone did something squirrely.  All I heard were screeching and whirling sounds.  Like the phone line was suffering a nervous breakdown.

I'm not sure of the exact number of people they had manning the hotlines when the city of Hamilton opened them but I would guess there was one frantic person answering the calls of the approximately 15,000 people over 85 needing an appointment.

People were having to call over 200 times just to get through to the line. I waited a day until they realized that their current ratio of 1:15,000 was going to mean that most of the people who needed a vaccine were going to die before getting through to the phone line.

I finally got through to the hotline and crossed my fingers that I'd be able to get an appointment that met Betty's requirements which were as follows: no morning appointments, no weekend appointments, no appointments anywhere that aren't close to a mall or furniture store for shopping in afterwards, no appointments on Wednesday - that's visit her friends day, and nothing in the next month or so because she was just too worn out from sitting around doing nothing.

Turns out the phone line was just for registering and no appointment times or days were given. I would have to wait for the clinic to call me with a day and time.

I got that call 3 days later, on a Saturday at 10:30 a.m.  I was asked if she could come for her appointment at 11:30.  It was a morning appointment, on the weekend, and would require that Betty immediately jump, up, get washed, dressed and be by the door for me to pick her up.

The hospital where they were giving the vaccinations wasn't  near a mall.  It was however right beside a former psychiatric institution which a realtor would list as a "Handsome fixer-upper with great potential for a handy exorcist." 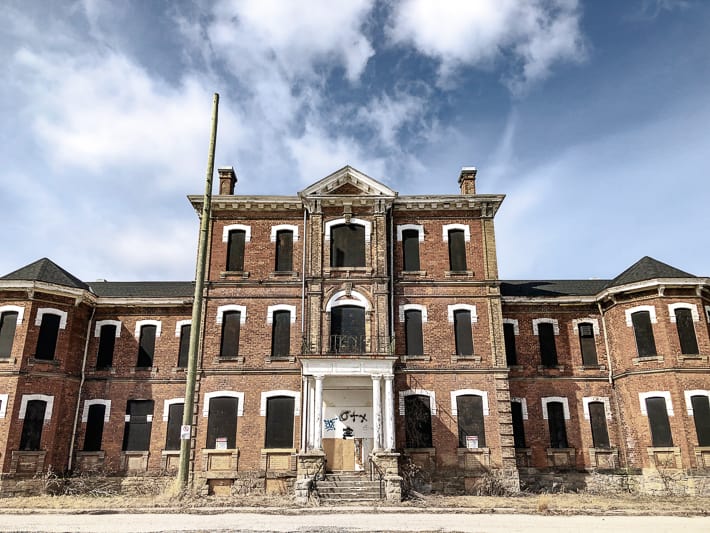 I made the call to Betty to let her know today was the day and WASN'T THIS GREAT?!  You can't often hear a sneer over the phone, but I did.

10 minutes later I was at her door with a couple of brand new level 3 surgical masks in hand.

After working myself into a froth trying to get Betty excited about this we arrived at the hospital where we were immediately told we had to wear brand new masks that they gave us.

The administrator let us know we could keep our regular masks, we didn't have to throw them out, we just had to put them in our pockets and put our new ones on.  Which I was glad about because like I said, I pulled out the big guns, the LEVEL 3 SURGICAL MASKS which we had worn for all of 2.5 minutes while we walked from the car to the hospital. I took mine off, put it in my pocket and put the hospital mandated mask on.

At this point Betty stared right into the vaccination helpers eyes, pulled her mask off (all while maintaining eye contact) and chucked it right in the garbage.

I'm still not sure if that was an act of defiance or just a case of not hearing the woman.

My mask new boinged right off my face when the elastic immediately snapped on it. This was already feeling like an unhealthy start to vaccine day.

Up the elevator, around the corner and down the hall approximately 1.5 km to the vaccination room we went.

I know if I ever set up a vaccination protocol for people old enough risk breaking their jaw after eating a marshmallow soaked in milk I will definitely make sure they have to walk as long as possible to get it. Because that just seems smart. You're gonna lose half of them on the journey.  More doses for the young and fit.

It was a remarkably quick and efficient process other than the hike. She was registered, we were both given stickers on our hands for some reason, and we were sent to a room with a few nursing stations. 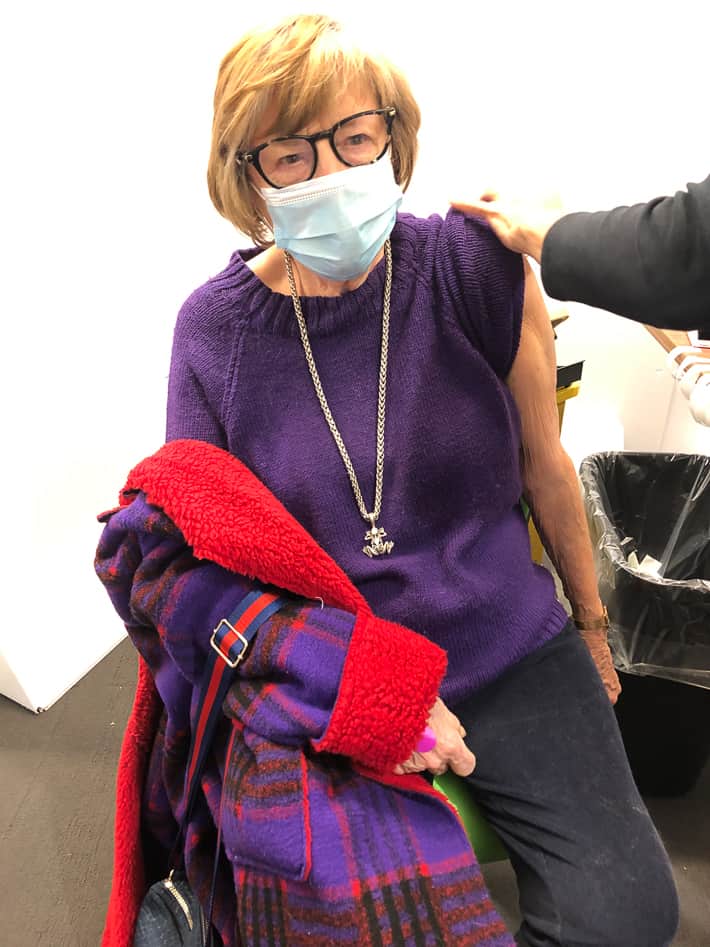 Her sweater sleeve was rolled up, she was jabbed, then we sat in a waiting room for 15 minutes to make sure she didn't have any adverse effects. Her mood was pretty foul so she seemed fine.

I spent the time on my phone and Betty spent the time pointing out the decorating she approved of. Also some time was spent with people coming up to us to comment on Betty's coat.  Betty has a collection of coats that all elicit a response from strangers.

This isn't her #1 coat by the way, that one is a quilted coat covered in an Asian print of horses that she made. I suspect we'll either bury her in it or take turns with it once she dies much like  The Sisterhood of the Travelling Pants, only we're real sisters and it's a coat, not pants, and we probably won't actually wear it.

We made the 15.7 km trek down the hall and headed back to the car . Betty was in a much better mood after it was all over with as you can see in the first photo where she's standing beside one of the many inanimate objects outside the hospital where people had stuck their (still unexplained) hand stickers.

The next day Betty felt a little tired from her vaccination.

I, on other other hand, was cramped up into a fetal position with an eye twitch until last Tuesday.

It appears as though I've overshot this post a bit and we're nearing in on 1,300 words so the rest of the stories will have to wait until next week. Unless, of course that's when Betty's second vaccination shot gets scheduled for.