Home » My Life » Random Stuff » What’s the 1st thing you learned to cook?

What’s the 1st thing you learned to cook?

Why do you always have cooking? She asked.  I hate cooking.  You shouldn’t have so much cooking stuff.  And then she pranced off.

This criticism by the way, coming from a woman who didn’t know garlic came in any form other than powdered  up until 2 years ago.  She also only eats because she has to and doesn’t really care what fills her up as long as it does the job. I once saw her eat a box of pipe cleaners and a handful of dog hair for dinner.  True story.

I, on the other hand, have always loved both cooking and eating.  It makes me happy.  I love that there’s a balance between creativity and science behind pretty much everything you make to eat.

I can remember the first 2 things I learned to cook. And I was fairly young.  Probably too young to be using a deep fryer actually.   Oh.  If you hadn’t guessed, the first food I  learned to cook was French Fries.  Of course, they weren’t the Perfect French Fries I make now but they were good. 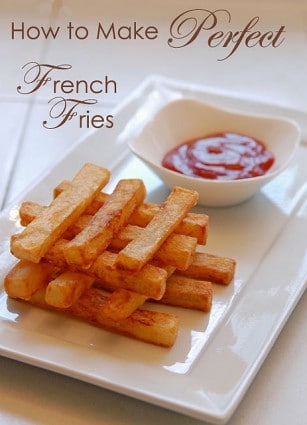 The second thing I learned to make was pizza.  I started making pizza in about grade 7 with frozen balls of dough, pepperoni my dad brought home from the butcher and green olives.  It’s still my favourite pizza combination.

If I were to ask my sister what the first thing she learned to cook was, I’m pretty sure she wouldn’t remember.    Ask her what the first home accessory she bought?  She’d be all over that, probably right down to where she bought it, how much it cost and which garage sale she sold it at years later.

My other sister …. she’d probably remember the first thing she cooked.   Vaguely.  But ask her to name 8 Jimmy Stewart movies in which he wore short sleeved shirts and kissed a woman in the final scene … and she’d be recalling movies in alphabetical order.  And possibly acting them out.

All of this got me to thinking.  Am I the only one who remembers the first thing I cooked?

Do you remember what the first thing you learned to cook was?

Lemme know.  More specifically, let us know.  ‘Cause I’ve come to learn after a couple of years of doing this, that apparently, the comment section is more entertaining than my actual posts.  Which is fine.  Takes the pressure off of me.  And leaves me more time to cook.