Why they might want to kick me out of Canada. 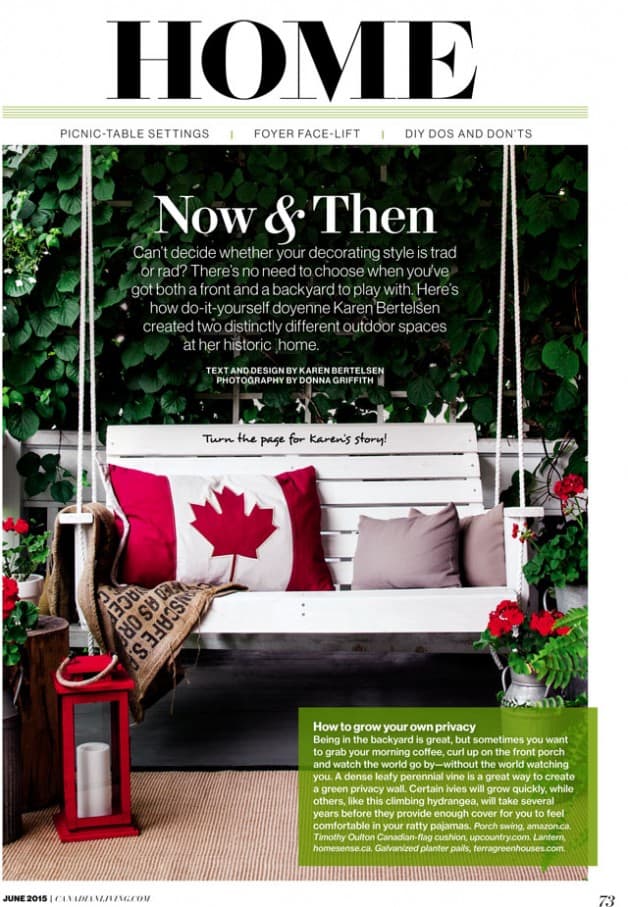 That’s my porch up there!

Photo by Donna Griffith for Canadian Living magazine. If you want to see some STUNNING food photography take a look at her page.

Today is Canada Day here in, … well Canada obviously.    We Canadians are a bit low key when it comes to displaying our patriotism, but we’re no less patriotic than any other nationality.  It’s the British in us.  We’re happier for you to guess what we’re thinking based on absolutely no clue or facial expression at all.

I always have a flag on my house and if you look above to the Canadian Living’s June feature on my front porch, you know my Canadian pride is reflected there as well.  You can’t quite see it but under the big pillow there is bootleg VHS copy of the lost Beachcombers episode.  Canadian pride at its best.

I eat maple syrup, poutine and ketchup potato chips, but not all at the same time because that would be gross on account of ketchup chips being a dessert chip.

There’s no one more Canadian than me.

Other than probably every single immigrant that’s passed the Canadian Citizenship test.

If you had to, could you pass the Canadian Citizenship test?  I failed.  I failed a lot.  I failed like Obamacare failed the American people even though I actually have no idea if it did because I’m Canadian and I go to the doctor for free and don’t pay a cent to wait approximately 10 hours in the emergency room only to find out they can’t stitch me up anymore because I’ve already started to coagulate.  Or something.

In my defence I was pretty cocky going into it and may have whipped through it faster than I should have.  Also it didn’t have any questions I expected like “What’s a beaver tail or which Canadian model was once married to Kyle MacLachlan after meeting on the set of a Barney’s fashion shoot”.

Happy Canada Day to my fellow Canadians and happy “Getting ready for the 4th of July day”  to my American readers.  To everyone else … I got nothin’.

1. Who were the United Empire Loyalists?
a. Settlers who came to Canada from the United States during and after the American Revolution.
b. Aboriginal peoples.
c. Métis
d. Inuit.

2. What does equality under the law mean?
a. Being the same.
b. Being like everyone else.
c. Being discriminated against.
d. Being treated with equal dignity and respect, and having equal rights to speak out and express ideas.

3. Name six responsibilities of citizenship.
a. Getting a job, making money, raising a family, paying taxes, mowing your lawn, voting in provincial elections.
b. Voting in municipal elections only, joining a political party, getting a job, obeying the law, driving safely, picking up litter.
c. Caring for the environment, not littering, paying taxes, obeying the law, helping others, respecting others.
d. Obeying the law, taking responsibility for oneself and one’s family, helping others in the community, voting in elections, serving on a jury, protecting and enjoying our heritage and environment.

4. Which region of Canada is known for both its fertile agricultural land and valuable energy resources?
a. British Columbia.
b. Prairie provinces.
c. Ontario.
d. Manitoba.

5. What do you call the Sovereign’s representative in the provinces?
a. Premier.
b. Member of the Legislative Assembly.
c. Lieutenant-Governor.
d. Senator.

6. When must federal elections be held?
a. About every 4 years.
b. On the third Monday in October every four years following the most recent general election.
c. Whenever the Prime Minister calls the election.
d. When the MPs want a new Prime Minister.

10. What is the Queen’s representative in the Territories called?
a. Premier.
b. Governor General.
c. Commissioner.
d. Member of Parliament.

p.s. To pass the (official) test you need 75%.  I got 70%.  Since we seem to have elections in Canada I really thought we could pretty much have them whenever pretty much anyone wanted one. I’m still pretty sure my answer is right and I deserve 80% making me an official Canadian Citizen.