WHY YOUR CHICKEN DOESN’T NEED A STUPID SWEATER.

Why’d the chicken cross the road?

Because its lunatic owner was trying to force it into a f&*[email protected] CARDIGAN!

For the past 4 years the only thing that’s been more popular than mason jars or wavy, shoulder length hair on Pinterest …   are chicken sweaters.  Every week I get at least one Tweet, Facebook post or email about a chicken sweater.  Mostly from people who don’t have chickens.  These are the people who are fascinated by and love chicken sweaters, mainly because they don’t completely understand a few things about chickens.  Like the fact that if you gathered 4 chickens together and sewed them into a sheet they’d be a duvet.

There’s a reason The Gap only has Gap Kids and not Gap Chickens.  There’s no need to put a sweater on a chicken and here’s why. 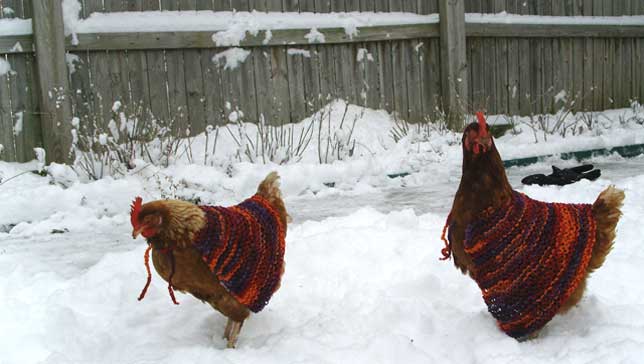 I understand a chicken in a sweater is kindda pretty.  So let’s get that out of the way. 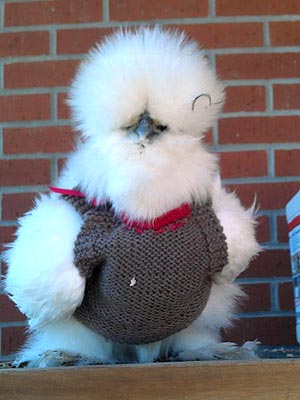 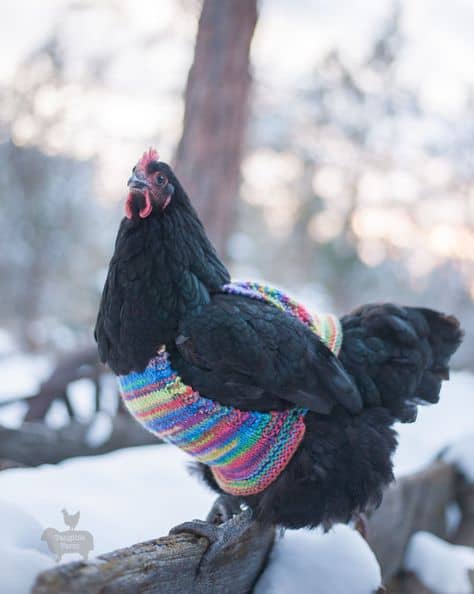 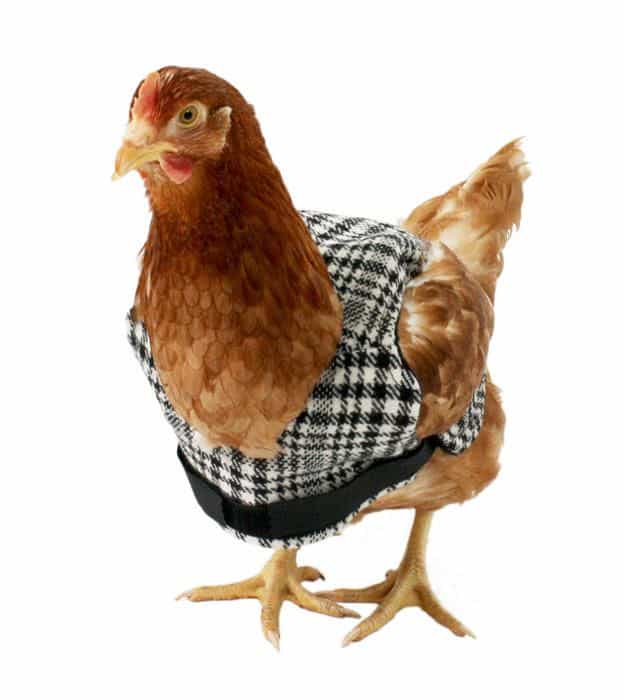 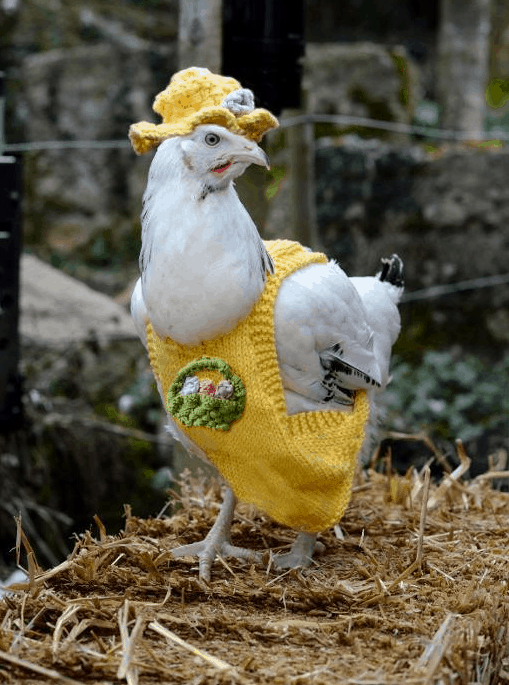 Seriously. If this chicken had opposable thumbs it would use them to pop its owners eyes out. 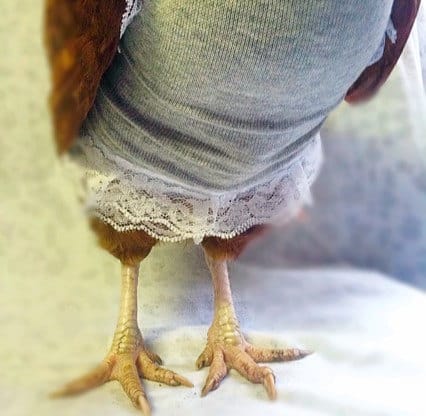 (note: I didn’t link to any photo sources because my point isn’t to call out anyone who makes or sells chicken sweaters … it’s to let the world know a chicken doesn’t need a sweater)

So what’s the number one, actual reason you shouldn’t put a sweater on a chicken?  Because it’s stupid.

And also it makes them colder.

Chickens are kind of geniuses at regulating their own body temperature.  Their temperatures can go from 105 F to 109 F depending on what they need any given day.  When it’s cold out they instinctively eat more which, through digestion, raises their temperature.  They shiver, huddle and most importantly fluff out their feathers when they’re cold. 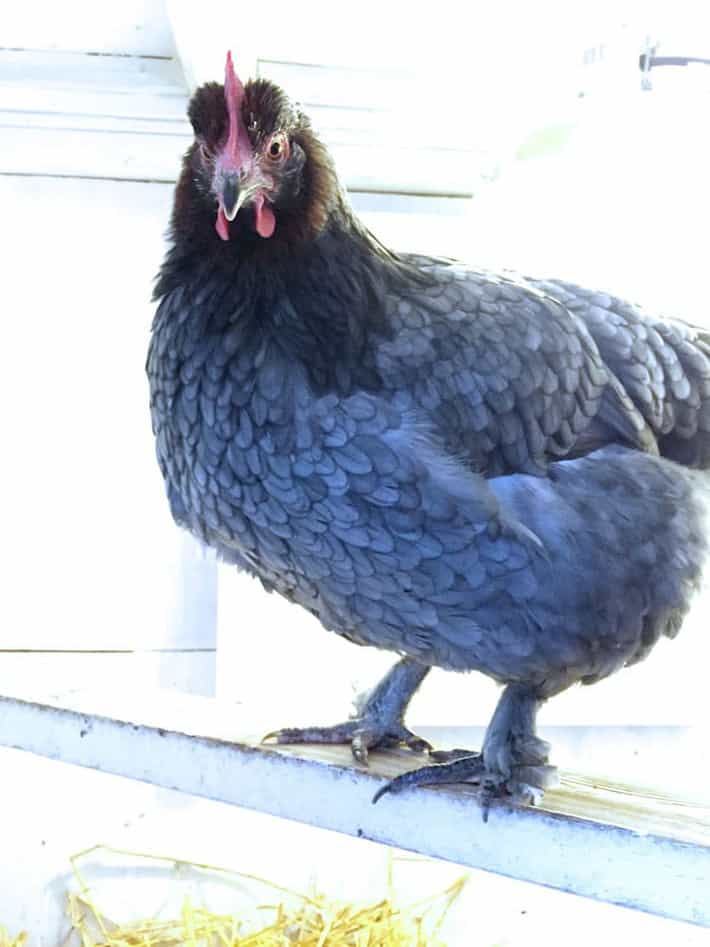 She wasn’t terribly cold, but you can see Mabel’s feathers fluffed up a bit as she gets ready to hunker down for bed tonight.  You can especially see it in the feathers on her head.

Putting a sweater on them stops them from being able to do that.  So no matter how cold they are or how hard they try, they can’t puff their feathers out which are restricted by the stupid sweater.

Chickens also produce more moisture through their skin when they’re trying to raise their body temperature.  If you add a sweater to that chicken, the moisture gets stuck between the sweater and the chicken and yet again, makes the chicken colder.

As far as battery chickens, which seems to be where this rage started, they have no need for sweaters either. Battery chickens are the ones that come from battery cages.  The kind of place that holds 10 or so birds in a cage that’s meant to hold one.  They’re miserable, sad, little creatures that sometimes have their feathers plucked out by themselves and other birds.  This results in a naked little chicken.  Once they’re adopted into a good home, the owner of the naked chicken wants to give this little abused hen the absolute best life they possibly can from now on. So they shove the already indignant hen into a sweater.

Once a chicken loses its feathers due to a moult or trauma it will almost immediately start feathering out again, which can be a painful process.  Having a sweater on it during this time will only irritate and hurt the chicken’s little pin feathers.  If you happen to come across a completely bald chicken in the middle of a winter snow storm you’d be better off bringing it into a mudroom or something similar.  Nowhere that’s actually hot, just less cold than the winter storm.

Chickens also have a surprisingly difficult time taking their sweaters off when they want to have a bath.

Even in the winter chickens keep themselves clean from mites and other pests with dust baths. If you provide them with a dust bath in their coop they’ll use that, if not, they’ll scratch and burrow into their bedding.  They can’t effectively do either of those things while wearing a turtleneck.

And THAT is why chickens don’t need a sweater.

You also don’t need to make a single other thing out of a mason jar.  That includes pizza.  Yes, apparently you can cook pizza by mashing all the ingredients into a mason jar and baking it until it’s a jar of slop.  Do not.  Need to do that.  O.K. Pinterest?