My mother used to serve me liver and tell me it was something else.  Chocolate cake or something.  It was a creepy move on her part.  She will deny this because she too hates liver and claims she never did that, would never do that and I’m making it up.  But if it wasn’t her, it was some other woman standing in our kitchen dressed in my mother’s burgundy velour pantsuit, smokin’ a cigar pushing liver on me.

Both scenarios are  traumatizing in their own way.  Come to think of it my mother never smoked cigars when she wore her burgundy pantsuit.

But late one night several months ago I watched an episode of Masterchef Australia. And they were making offal.  For those of you who don’t know what offal is, it’s guts.  The internal organs and entrails.  So offal is awful.

But I tell you … in the hands of the producers of Masterchef Australia … that offal looked good.  The liver apparently was prepared to perfection.  It glistened under the show lights and each judge took a perfect little bite, gasping and ooing over its deliciousness.

I came *this close* to running out and buying a  hunk of liver at 12:30 at night.  Then I came to my senses and remembered I wasn’t Tiny Tim.  I have a fridge full of perfectly good food that isn’t filled with bile ducts.

It was a close call indeed.

A few weeks ago I presented you with my bookmark list of recipes from my computer.  I asked you to send in some of yours.  And you did.

After getting your emails and seeing your Pinterest boards I realized I’m not like you.  Not like most of you anyway.  I rarely browse Pinterest looking for stuff that looks good.  As in never.  I like to look at the pictures but rarely pin food items.  I think, like with Foodgawker, I’m worried the person offering the recipe is more interested in getting good lighting for their Pin worthy photo than having a really well thought out recipe.

Which is funny when you consider the amount of my recipes that have been pinned.  My very own Guaranteed Crispy Sweet Potato Fry recipe alone has been pinned 948,000 times.  Yes.  Almost a million pins.

My recipe bookmarks are usually marked after I think of something that I’d like to make but have never tried before.  I search the Internet, compare recipes, decide which one suits my tastes or curiosity the most then bookmark it. A lot of times I don’t bookmark it until I’ve already made and liked it.

And mainly I get my recipes from either cookbooks that I KNOW are good or …. the Masterchef Australia website after watching the show.

YOU folks on the other hand are very visual when it comes to your bookmarking and Pinning.

And boy.  Do you love your pinning. Please enjoy spying on what everyone else is eating. Or in some cases, what they simply like to look at. 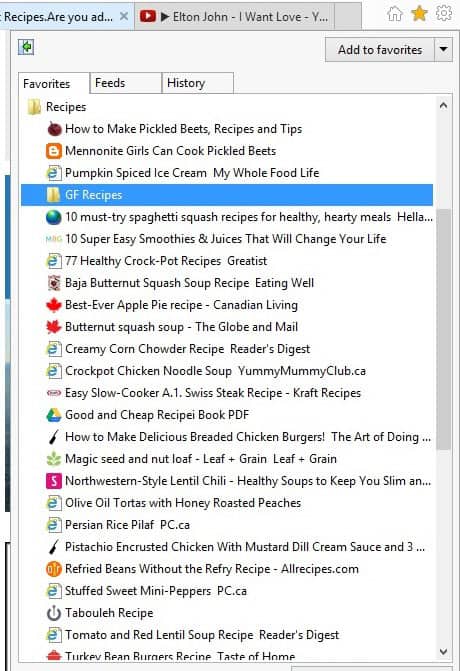 Nicole has 2.  Only 2 recipes saved on her phone. 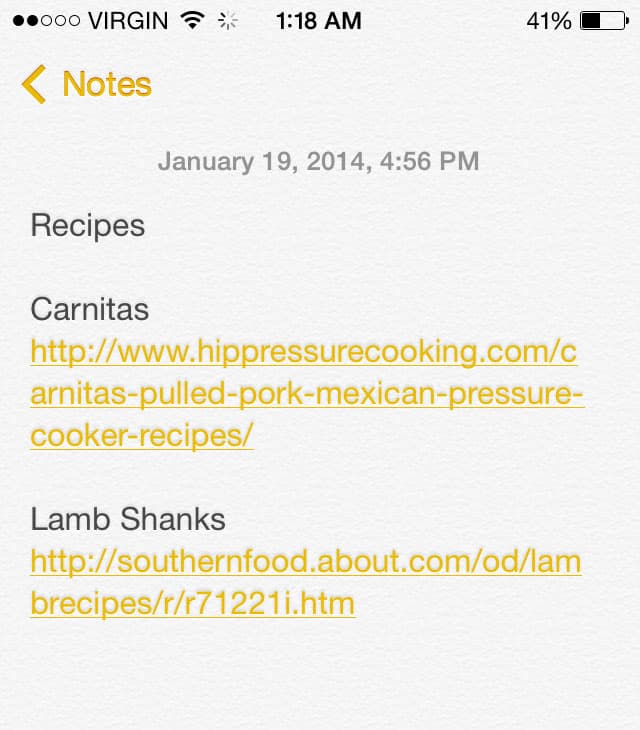 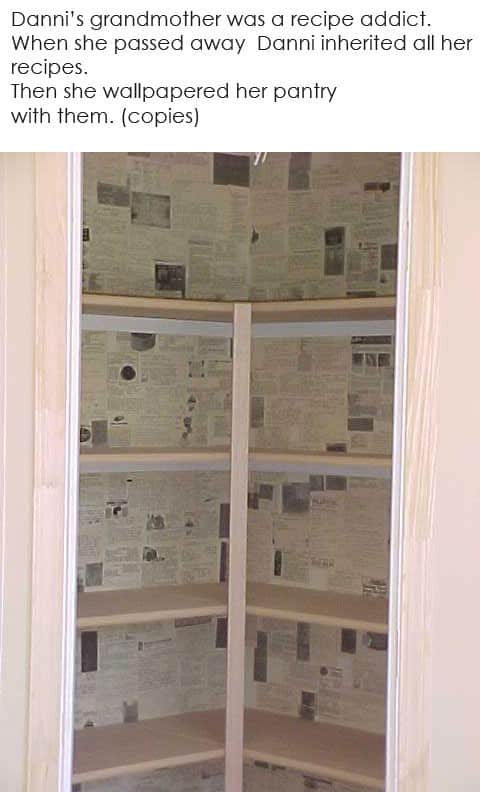 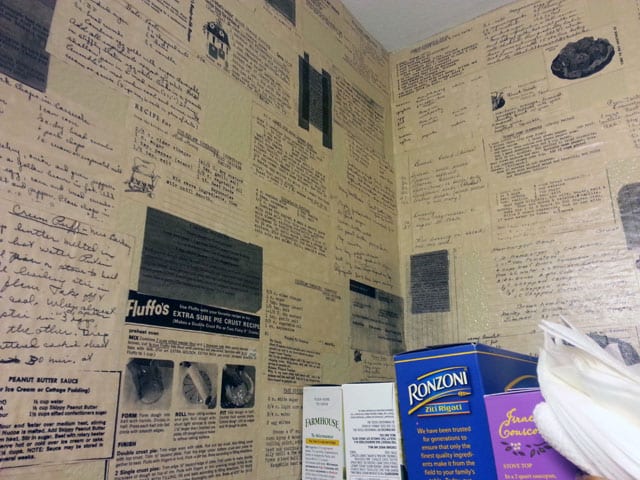 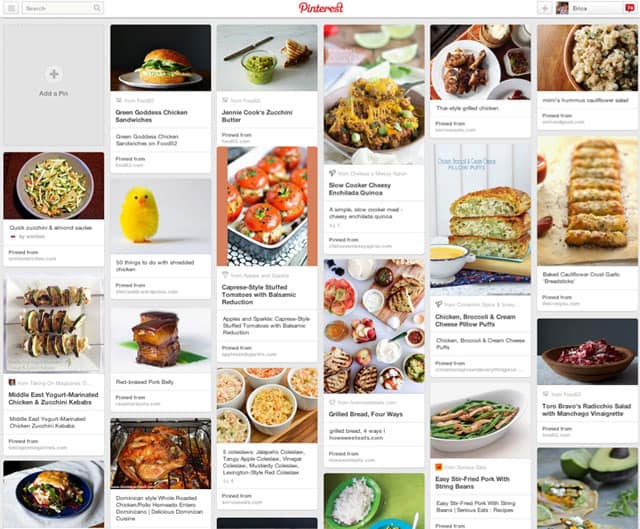 Some of Claire’s saved pasta recipes. 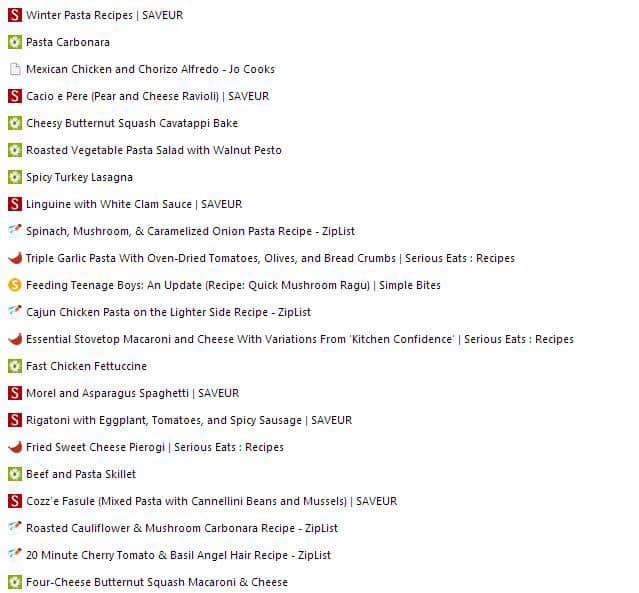 I don’t know what the weird length of jammy sort of thing is in the middle but I LIKE IT. 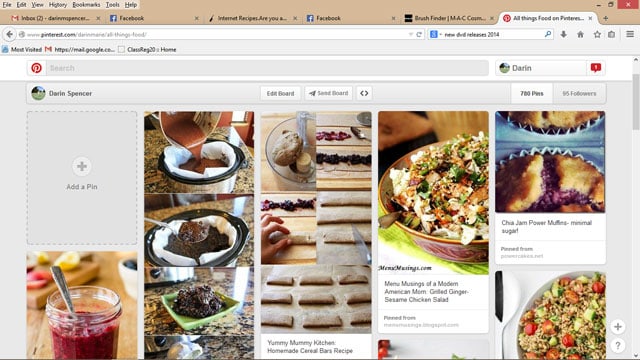 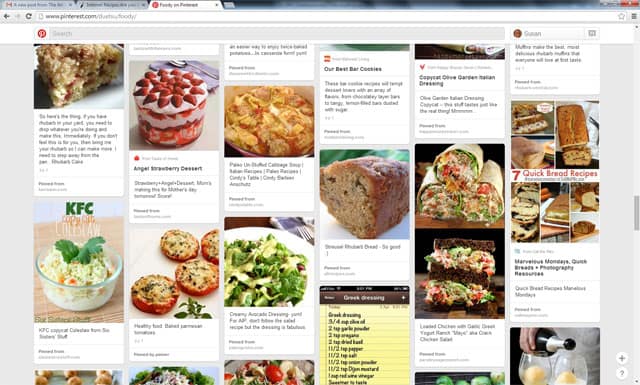 The pork loin with sliced apples at the bottom looks good.  And I don’t even like pork.

Unless it’s bacon.  Everyone likes bacon. 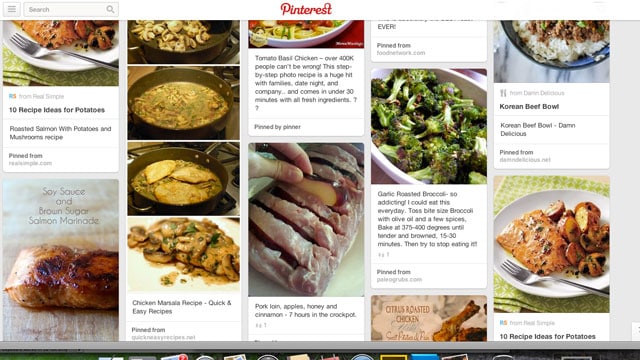 The old school are all the cookbooks.  The new school is the fact that he has books on one of my favourites …

Ron also has over 3,000 recipes saved on his computer. 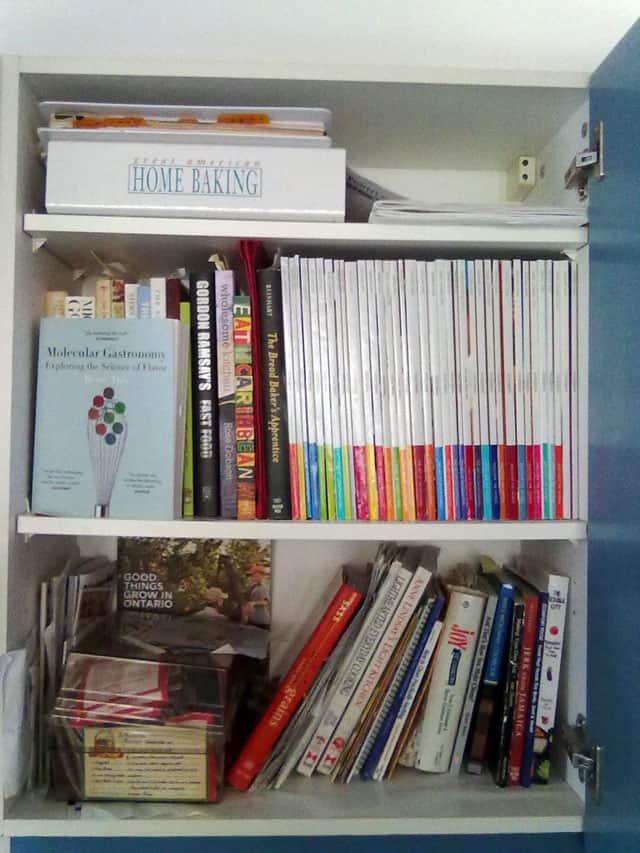 Nancy’s computer recipes are easily the most organized of everyone’s. 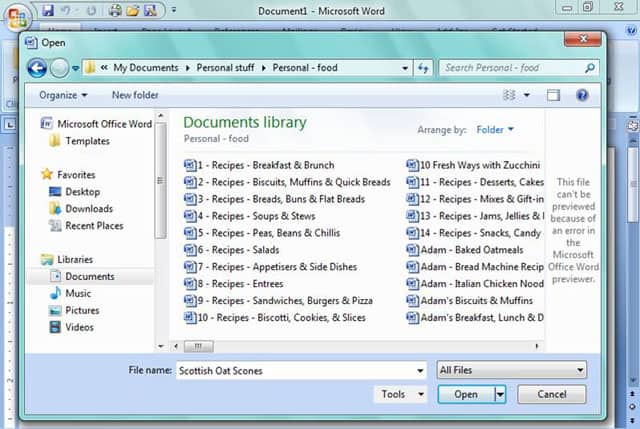 Very curious about Sara’s 4th recipe from the bottom.

“secret ingredient” in the Secret Ingredient Beef Stew is. 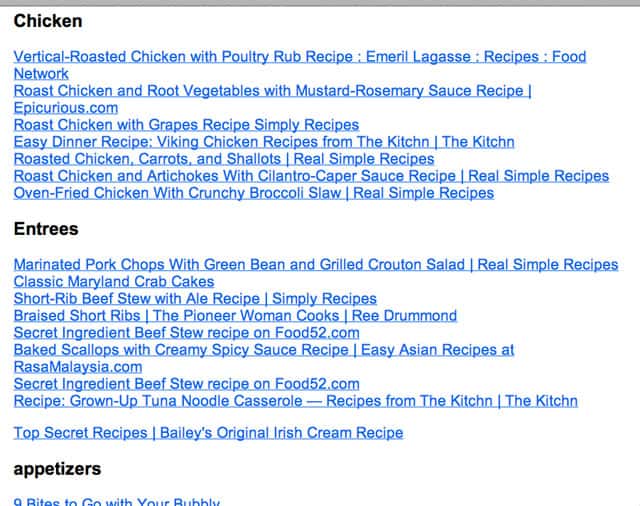 Pay attention to HOW many recipes Liz has bookmarked.

Also note she informed me she still has no idea what to have for dinner. 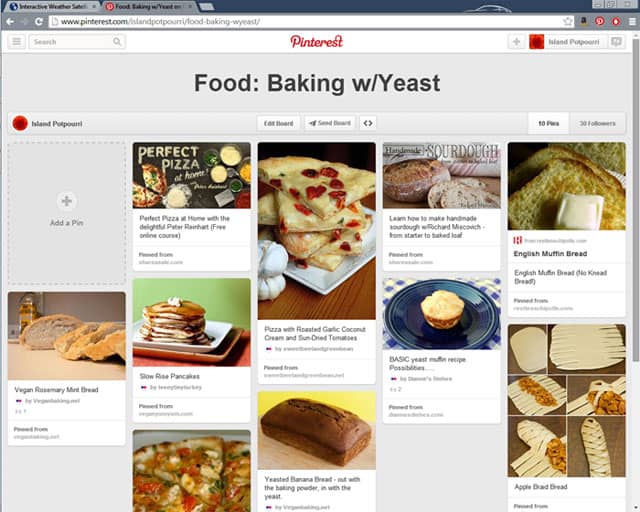 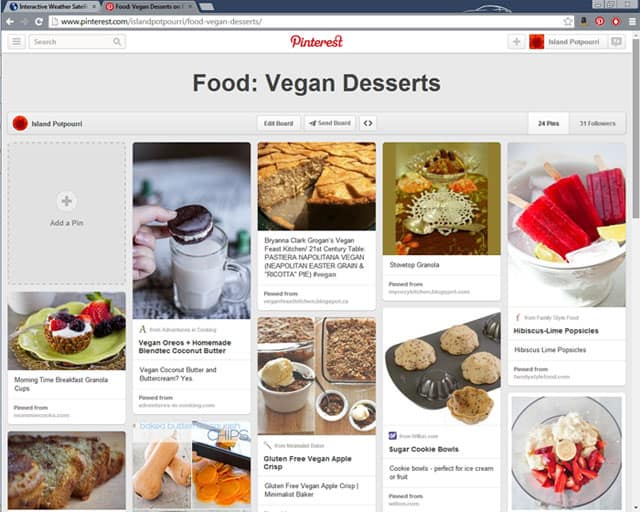 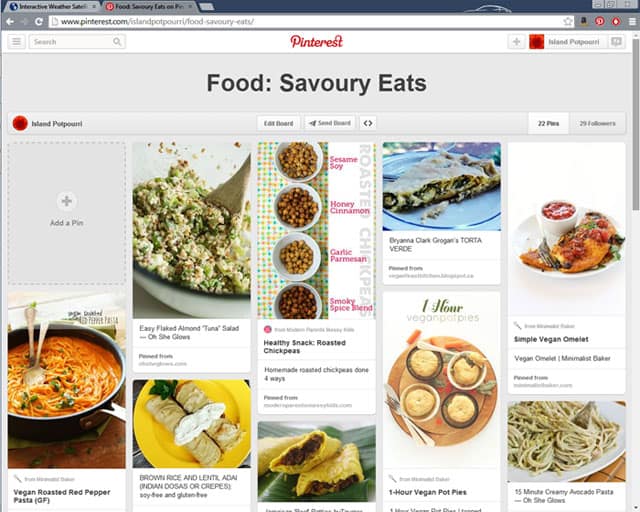 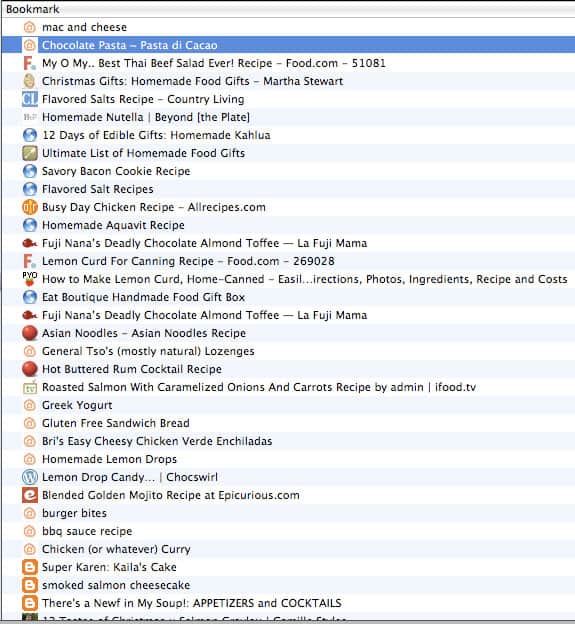 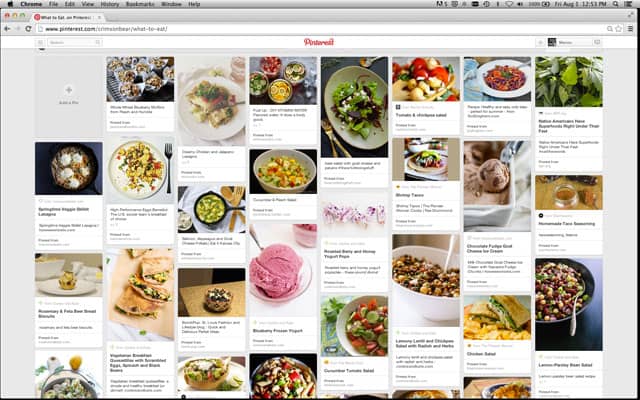 Stephanie has a LOT of great chicken recipes.

Which she has pinned.

Which she never makes. 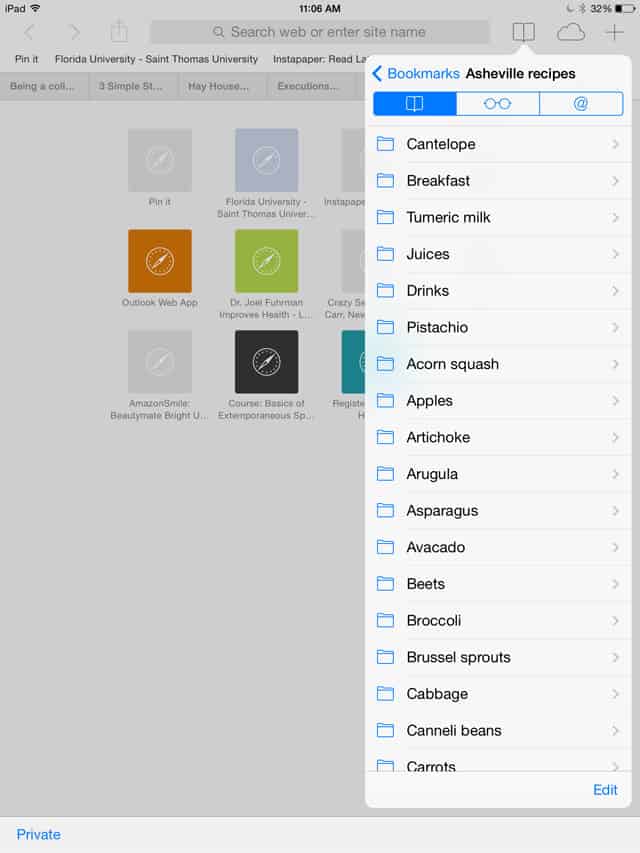 Mindy on the other hand does make.

She makes, easts, hoards. And repeat.

Mindy is our most prolific Pinner. 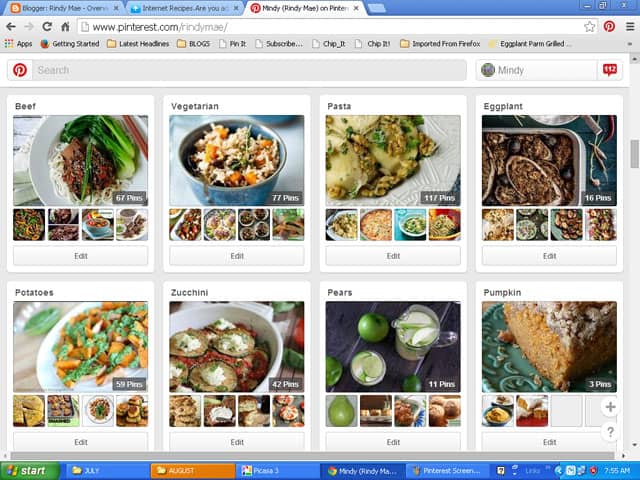 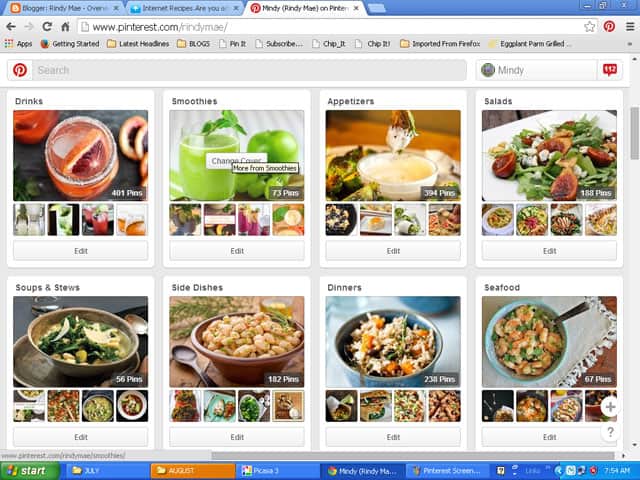 She could not live without it.

I could not live without water, shelter and those super soft socks that have Aloe imbedded into them. 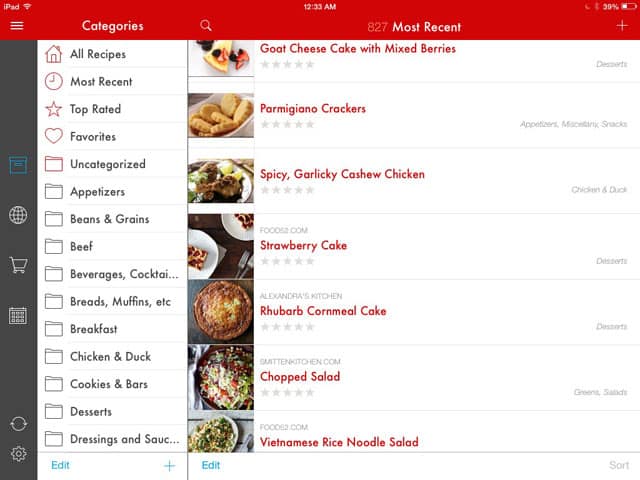 I wonder if they’re my bacon wraps. 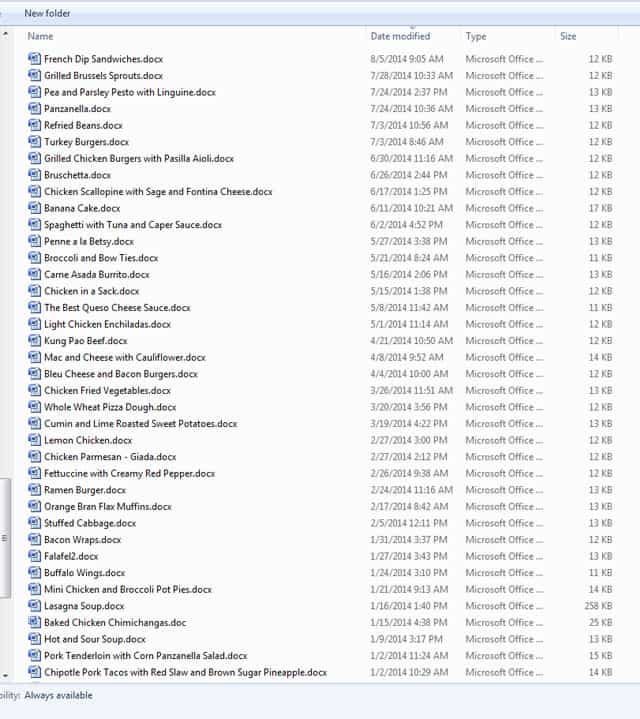 Julia’s Pinterest board encourages the eating of salads, sandwiches and shit-loads of cake.

My Brazillian Black Bean Soup is in the centre. 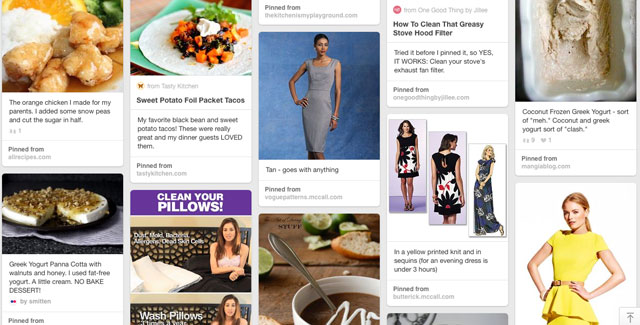 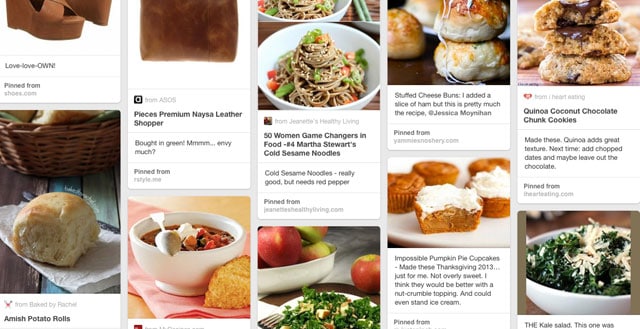 Incidentally, as far as I could see … not a liver recipe in sight.

Have a good weekend! And happy Pinning.