I spent a fair amount of time during the teaching of my How to Turn Your Blog into a Business course last week emphasizing how IMPORTANT good photos are on your blog.  It's a visual medium, like television so there has to be something to look at.  Even newspapers which you think of as being something you read as opposed to see or watch, have good photos to enhance the story.

So it is with great pride that I show you what may be the grossest photos on the Internet at this moment.  They are wonky, unprofessional and completely unattractive in every way.

I tried.  I really, really tried to get some half decent looking photos of me changing out the belt on my front load washing machine when it broke down but … it just wasn't possible.  For me.  For someone else with more talent I'm sure it would have not only been possible but probably would have resulted in some sort of award with cash prize.

My washing machine/dryer combo has broken down a total of about 10 times in the past 15 years.  I just keep fixing it.  Part of the reason is I can't be bothered to call someone, wait around for them to show up, only to tell me that jeez … they don't have the part, and they'll be back next week.  And I don't know what it is about appliance repair people, but much like many mechanics I automatically assume they're out to get me.

Appliance repairmen.  The boogiemen of the adult world.

So, that's why I fix things myself.  Usually a half an hour or so spent on Google will tell you what's wrong with whatever it is you're trying to fix.  In my case it was a very old Bosch washing machine that wouldn't spin.

The problem apparently could have been a loose or broken belt (the belt that goes around the drum to make it spin), a problem with the door, or it could be worn brushes in the motor.  Had no idea where or what they are so I Googled again.

Armed with 3 possibilities, I went about trying to diagnose and possibly fix my machine before I ran out of underwear.  I was already into my "theme" underwear. You know the stuff with Santa Claus or red and white lace stuff it almost kills you to wear even on Valentine's Day.  So clearly this was a problem that needed to be fixed stat.

As it turns out I discovered my belt was fine, the door was O.K., but when I jiggled the brush that goes into the motor (you don't need to know or care about that) the machine started working.  Then it would stop a day or so later.  This led me to believe the problem with my machine is a worn brush in the motor.  A quick trip to the parts store and my washing machine will be fixed.  For now it works on and off.

But while I was taking my machine apart, I thought I'd show you a little trick that will work with just about any belt on any machinery.  If you've ever tried to get a belt on something that was really tight you know it's almost impossible to stretch it into place.

That's because it isn't meant to be forced into place it's meant to be guided by the track that it's actually on.

Confused?  Don't worry.  The really bad photos will take care of that.

First things first … ALWAYS unplug what you're working on. 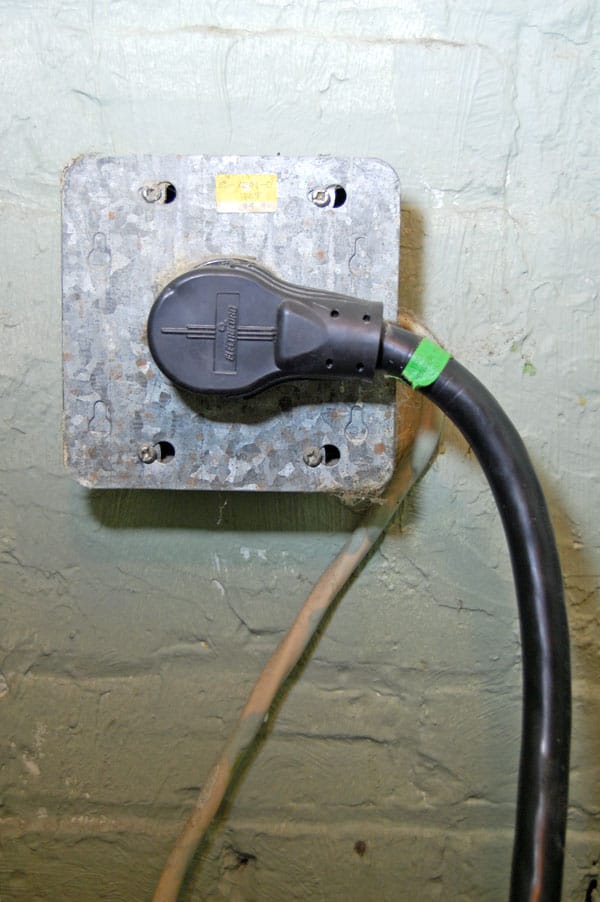 With the back of my washing machine off I could get a look at the guts.  This is the belt that turns the drum.  There would be a similar belt on a dryer and a bunch of other doo daddy machinery  in the world. 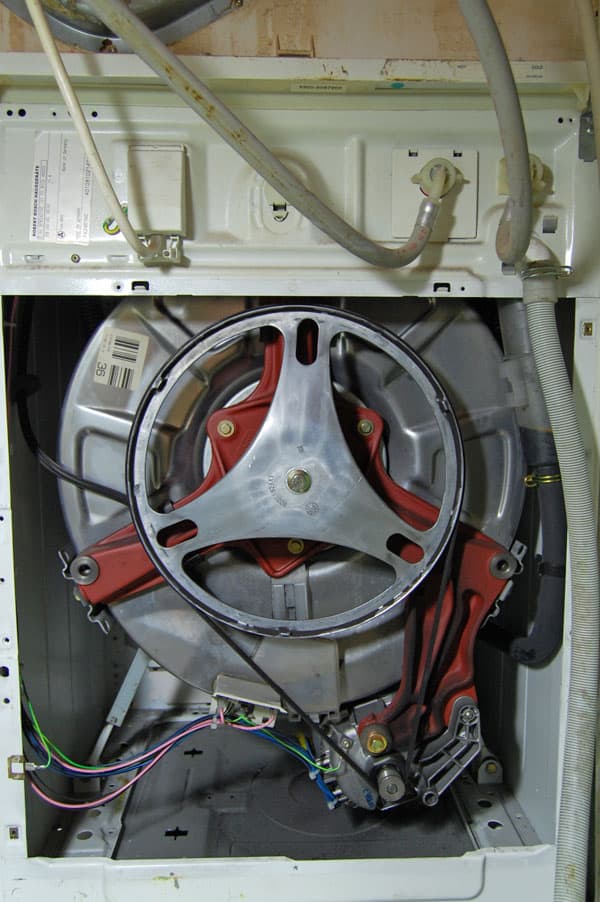 You can see the belt goes around the metal wheel. 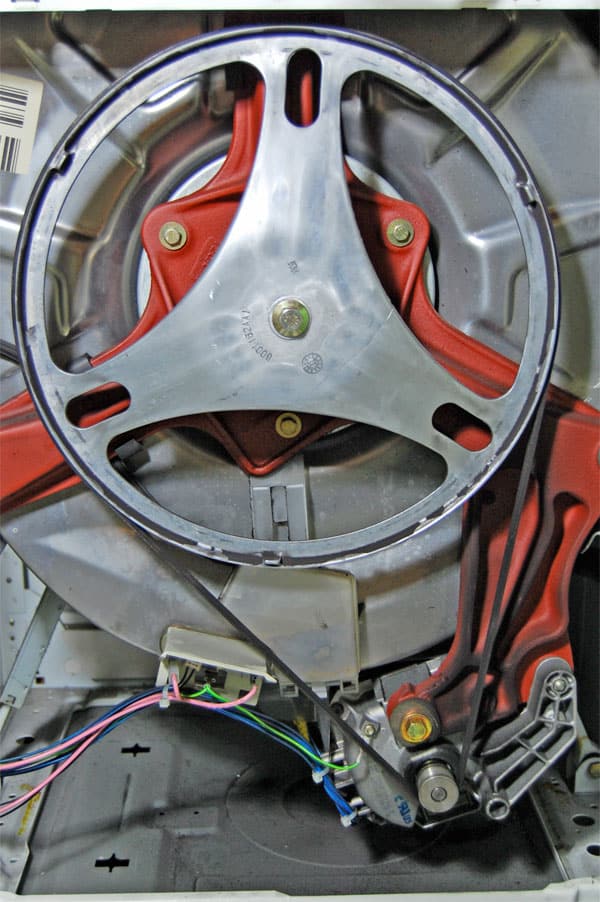 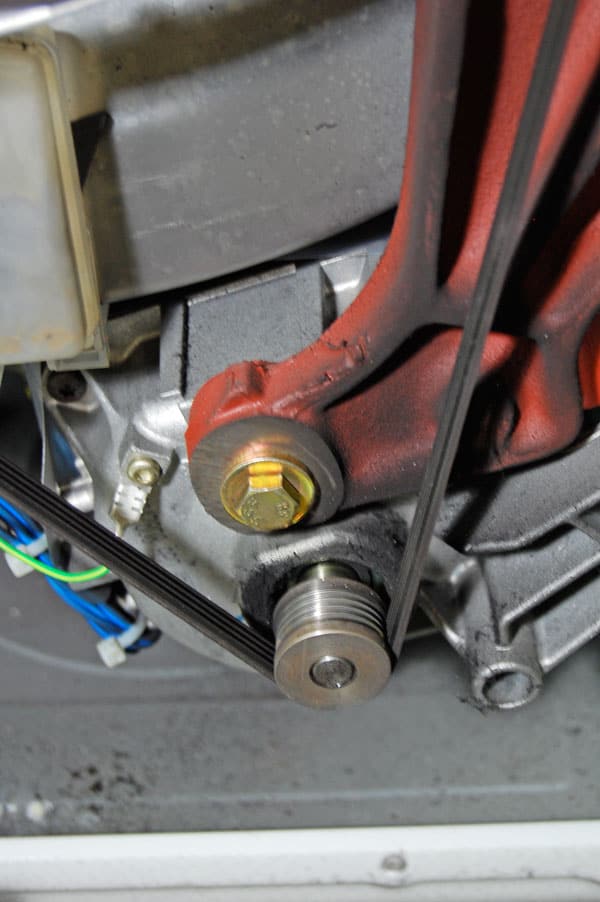 Removing the belt is easy.  Just grab a bit of it (making sure to not squish your fingers in anything) ... 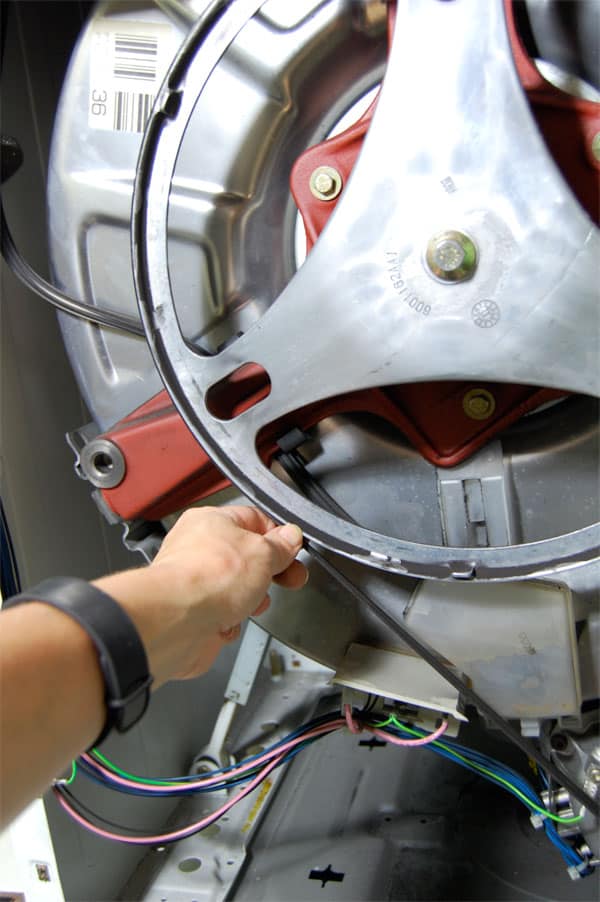 … and ease it off of the wheel.  You can turn the wheel  a bit if you have to, to help it along. 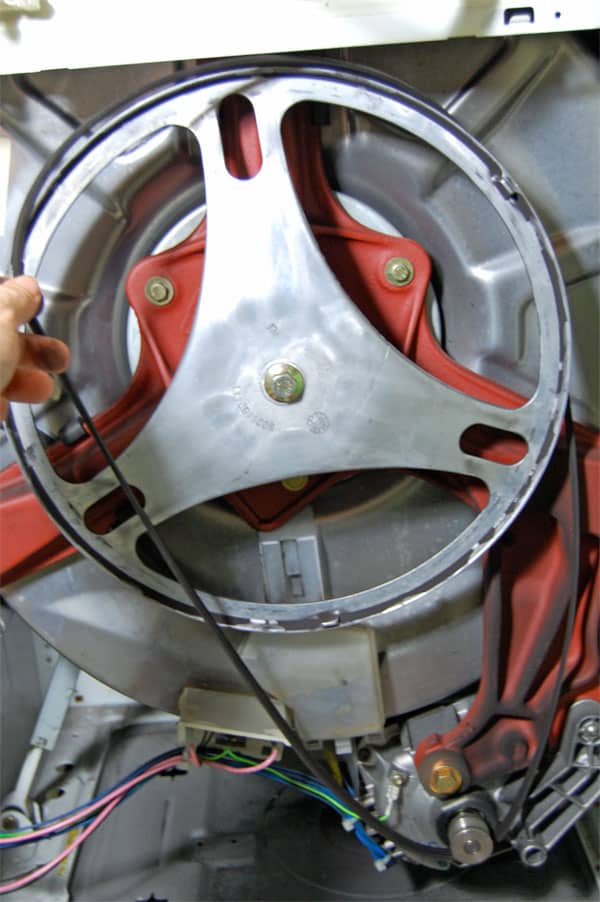 Done!  That was simple. You feel great about yourself, your accomplishment and your dirty fingers.  Now what? 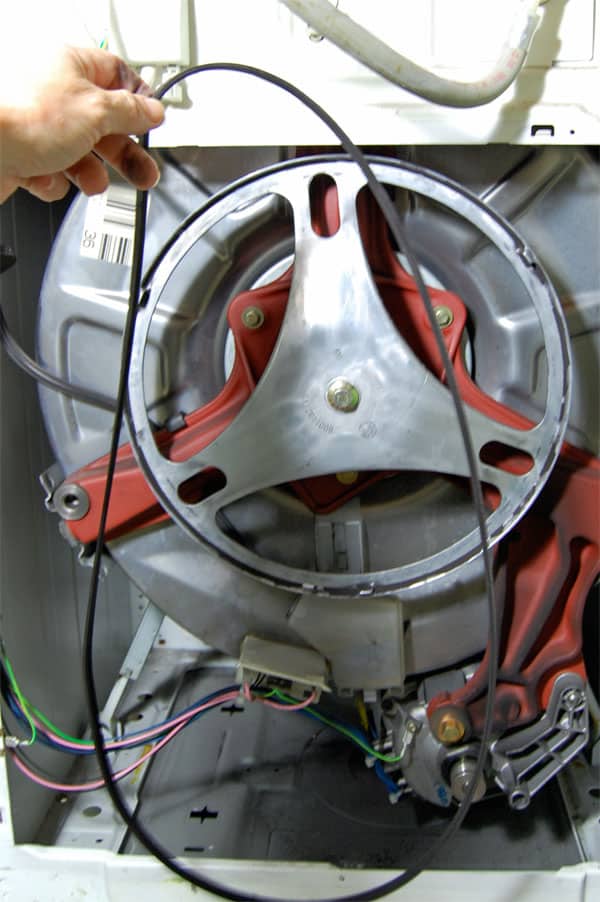 The truth is, newer belts really don't break down or stretch out very often, but this is the procedure you would use to take a belt off then put a new one on.  There are other times (although I'm not sure when exactly) that you would need to remove and then replace a belt.  Oftentimes after overindulging in Chinese food.

To put the belt back on slip the belt around the pin. 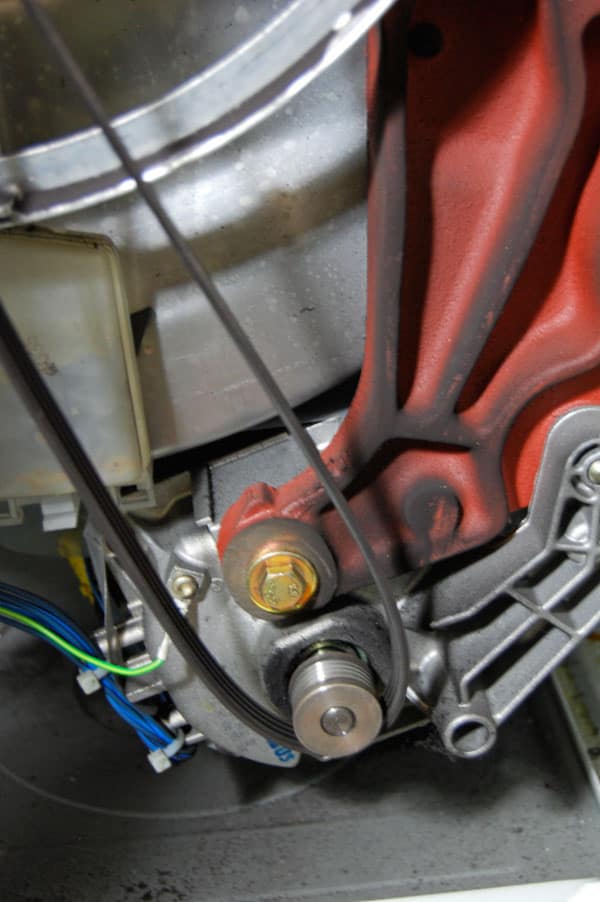 Then fit the belt onto the wheel as much as it will go without forcing it. 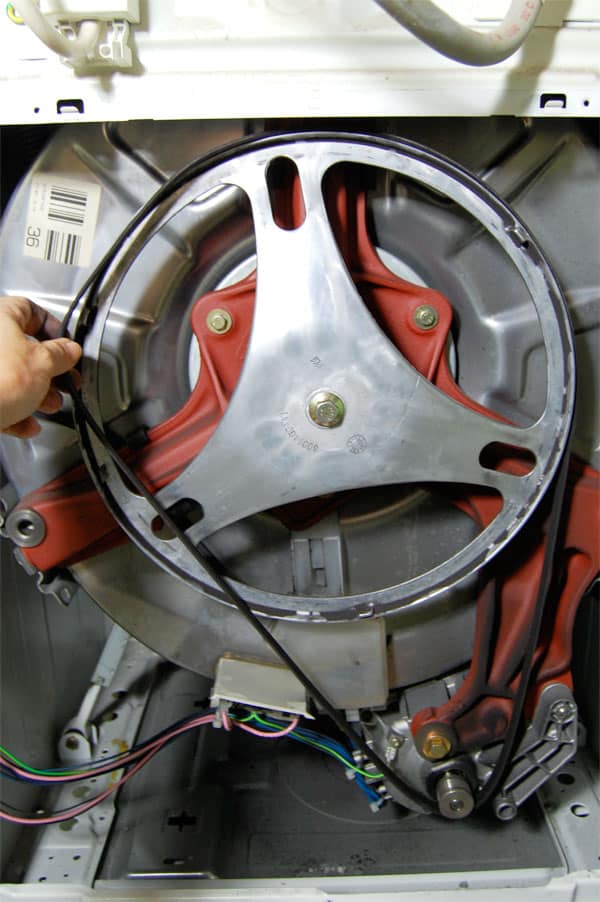 Now, with your free hand, just spin the wheel slowly.  The wheel will pick up the belt all on its own and you won't have to force it at all. 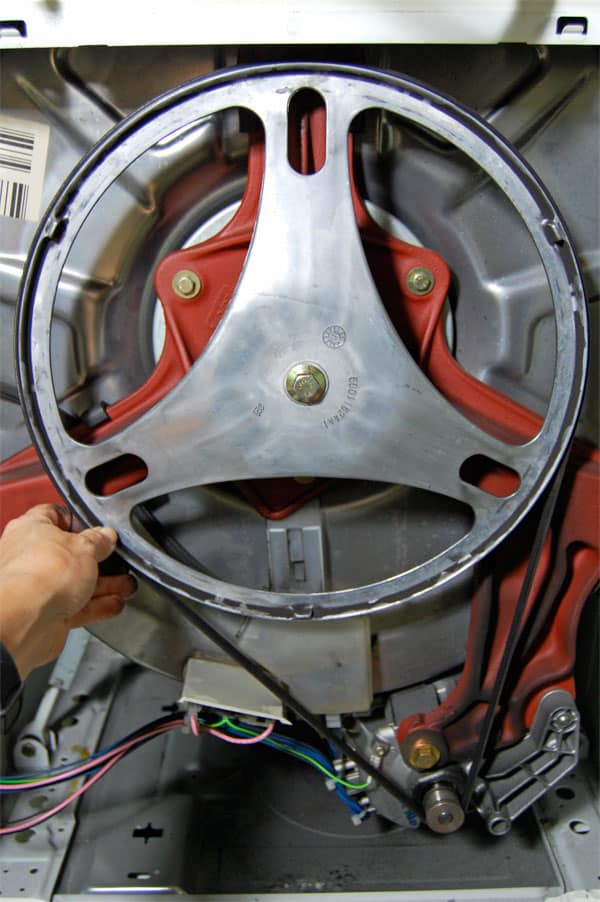 Yeah, I know you're still confused. I figured that was going to happen so while I was busy taking bad photos, I was also shooting a bad video.

I'm nothing if not consistently and reliably bad.

Any more photos or videos like this and people will be offering me cash prizes to stop making them.

And there you have it. I'm sure you have no idea how you managed to get along in life without knowing how to properly change a belt on various pieces of machinery. I for one wonder how you've done it. But now you are blessed with the information which should make you feel secure. You know that when a belt breaks or comes loose and others are in a state of panic, calling 911, screaming, crying and trying to overthrow the government, YOU will be able to step up and fix it.