Want to run in the ice and snow (because you're hard core and a lunatic?) ... look no further than your basement screw stash.  DIY running shoe ice spikes for about $1. 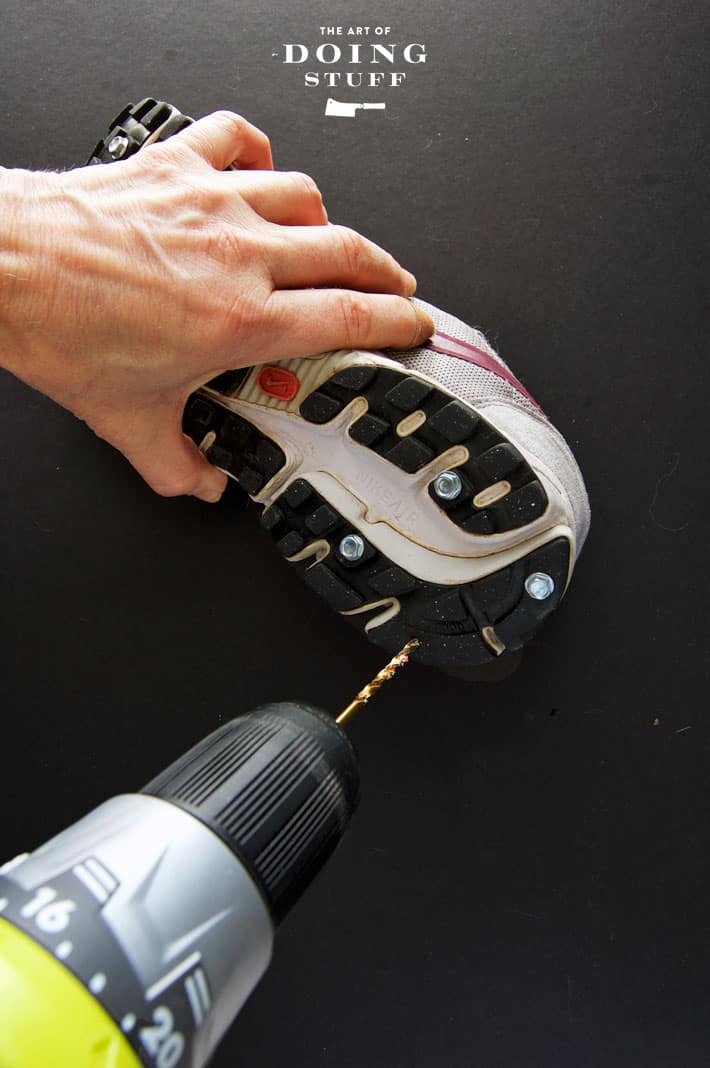 Skip right to the Tutorial.

If you know anything about me, you know that I am a runner.  A very, very bad, begrudging runner who limps along at a pace reminiscent of a sloth wearing mittens.

I hate running.  So, I'm kind of an elite runner in that respect.

I pick it up and then forget about it for months and then put my shoes on again to see if this, maybe this time, I won't hate it. And every once in a while, it happens.  I run like the wind. I go and I go and I go and before I know it I've made it all the way out to the sidewalk without once crying.

Obviously I'm just kidding.  I've never made it to the sidewalk without at least crying a little bit.

So why do I do it? Well in the winter I don't do much physical activity other than sit at my computer and type.  Once in a while I chase my cat around the house if they have a poo stuck to their bum.  And that's pretty much it for physical exercise in the winter.

I do shovel and chop the odd bit of wood but not nearly enough to balance out the 14 bowls of chili and toast I'm likely to eat any given week.

So winter is my running season.  It's when I need exercise the most.

This whole process has been fine for the past few winters in Southern Ontario which weren't like winters at all. More like summers without the bug spray.  There was no snow or ice or anything.  But THIS year.  This year it's the kind of winter you'd expect in Canada.  Snow, ice and freezing rain.  It's perfect weather for curling up on the couch next to a fire, or, if you're me, sliding down the streets in running tights and shoes, grappling for the nearest street sign or even penis it it happens to be nearby. Anything to stop me from slipping and sliding cartoon-style down the street.

Enter running shoe spikes.  They're elasticized contraptions that slip onto your running shoes with studs and wire on the bottom to help your shoes dig into snow and ice.  Which in turn stops you from grabbing at penises.

These are great, but they can be expensive if you get into the high end ones and they're, quite frankly, completely useless when they're locked in a store that isn't open.  Which is the exact situation I found  myself in a couple of weeks ago.

I felt like I should go for a run but it had been snowy and icy out for days.  Not wanting to take my life (or  neighbouring penises) into my hands, I decided I should buy some spikes.  The only problem was, this was at night and the stores were closed so I couldn't go and buy any spikes.

So I hacked my running shoes and in about 10 minutes I had running spikes.

It was perfect.  And all it took was a few screws.

Screwdriver or socket wrench. (depending on the screw head) 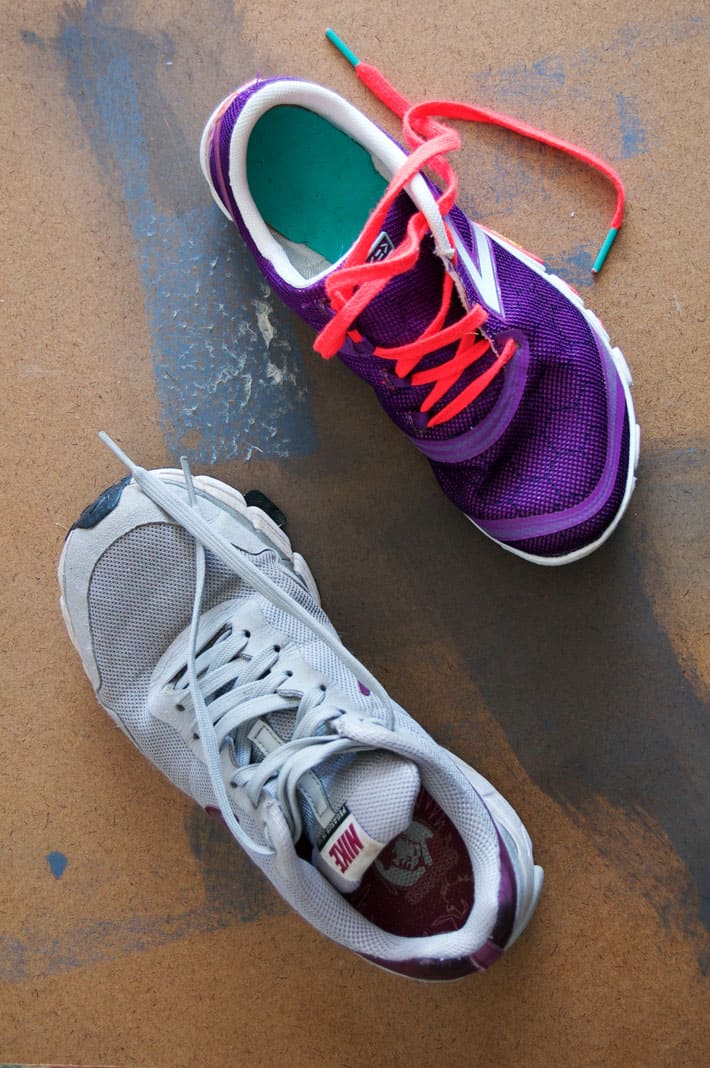 The first thing you need to do is pick a pair of running shoes this will work with.  I had these two choices. My very old shoes which I love or my new shoes which I hate. 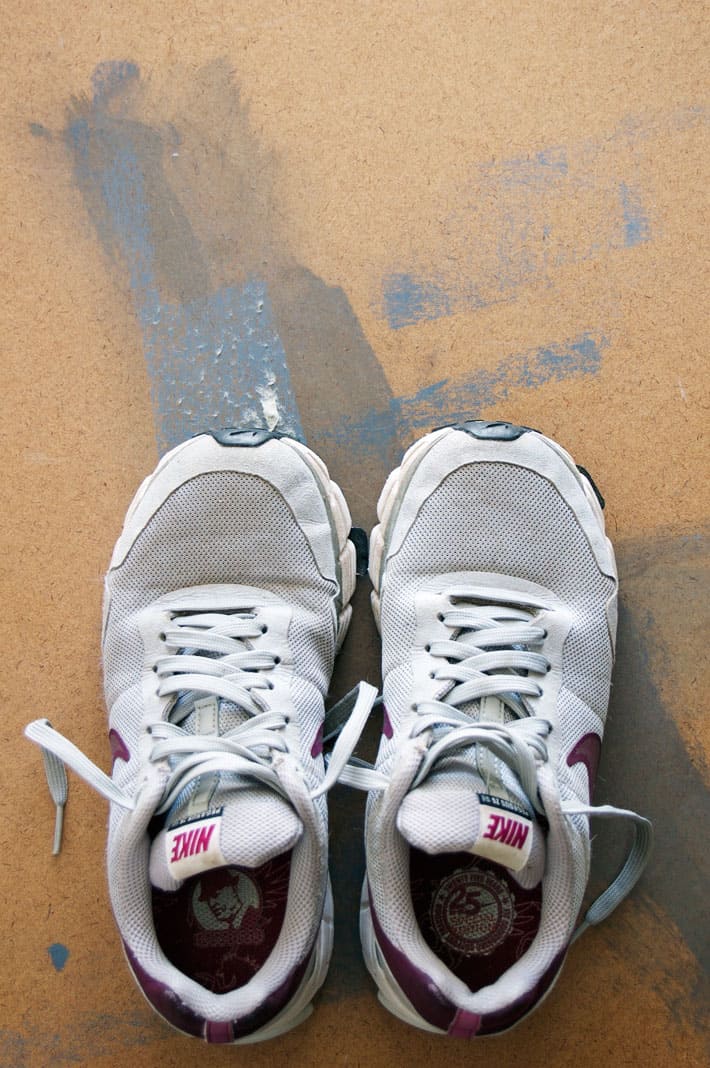 I chose to spike my very old shoes because they have thicker soles. 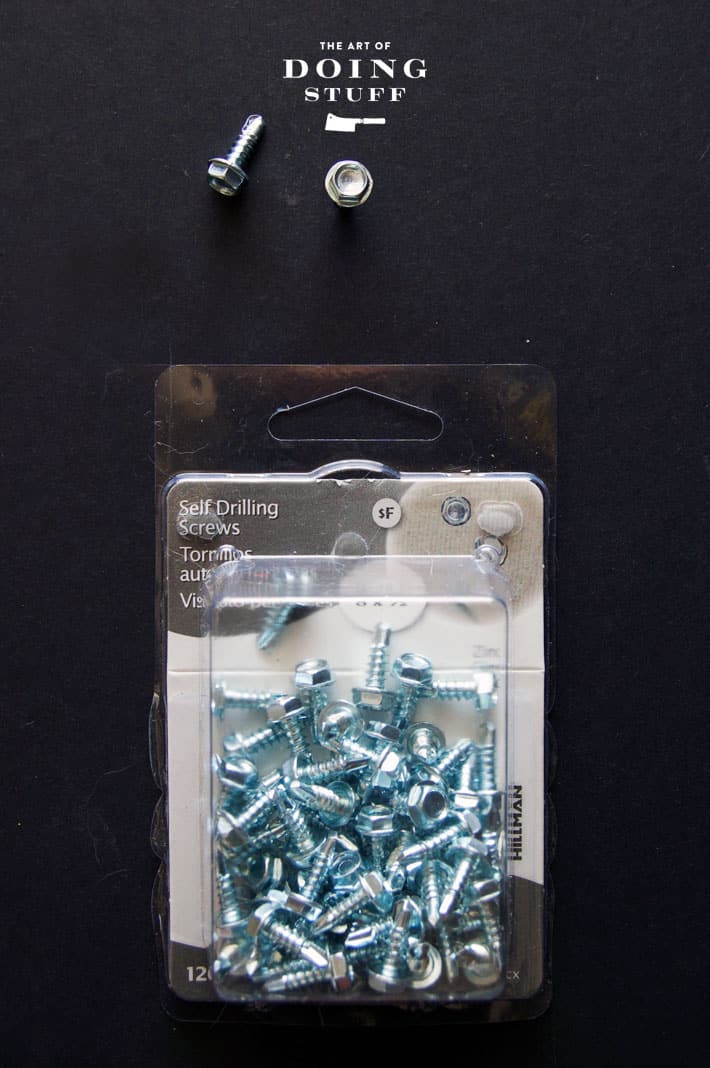 You'll be screwing  #8, ½" hex head screws into the bottom of your shoes. 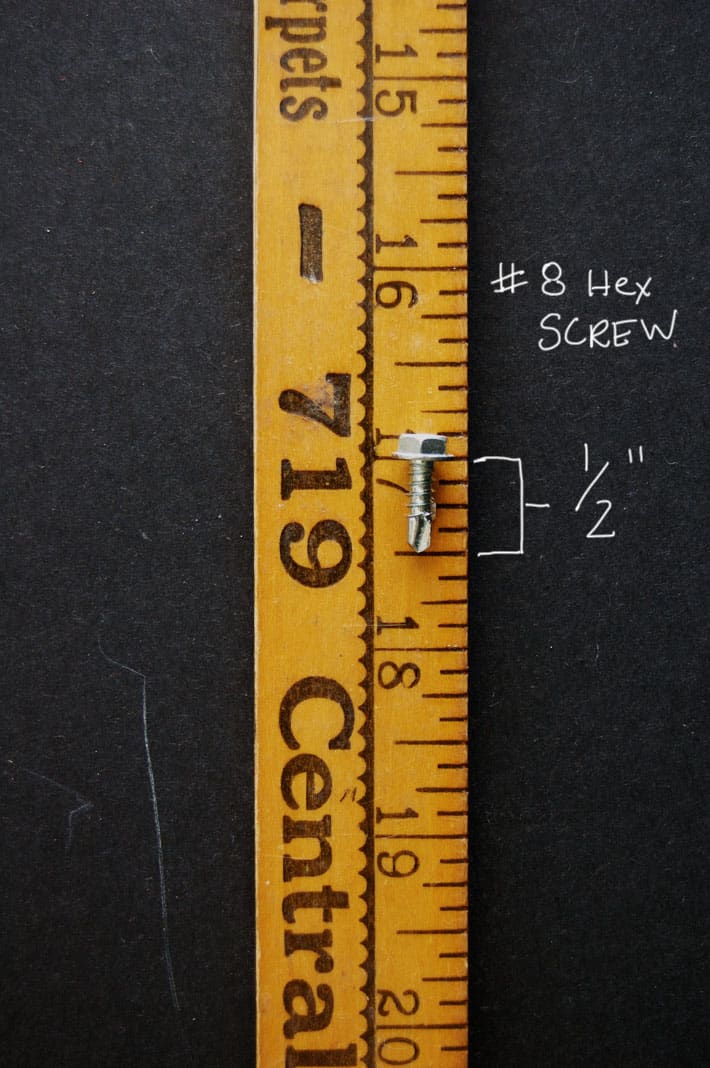 If your shoes are thin soled shoes you risk the spikes sticking straight into the soles of your feet when  you run.  So ... avoid that obviously.  Pick a pair with thicker soles. 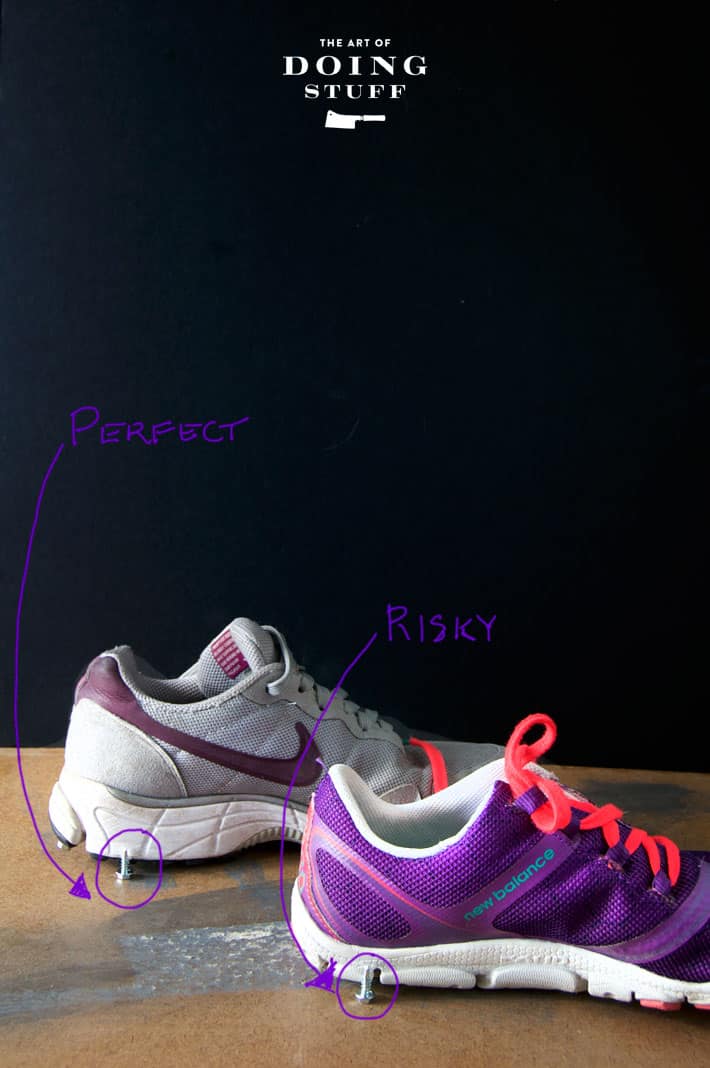 Even at it's thickest part the soles of the purple New Balance shoes weren't thick enough to embed the screw into without going through the other side. 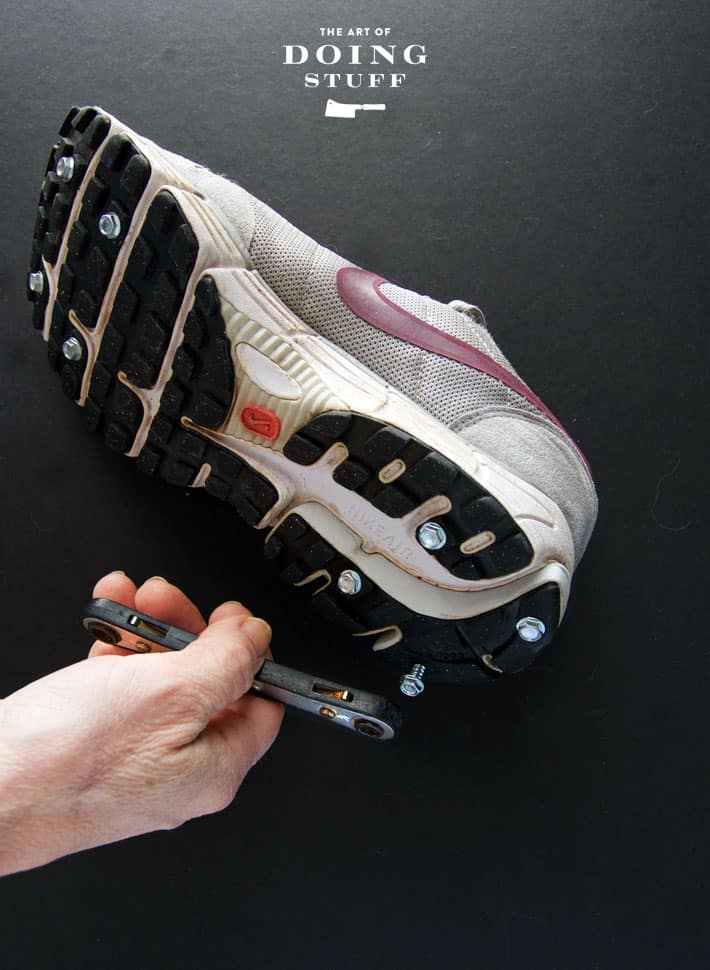 2. Screw the screws into place. 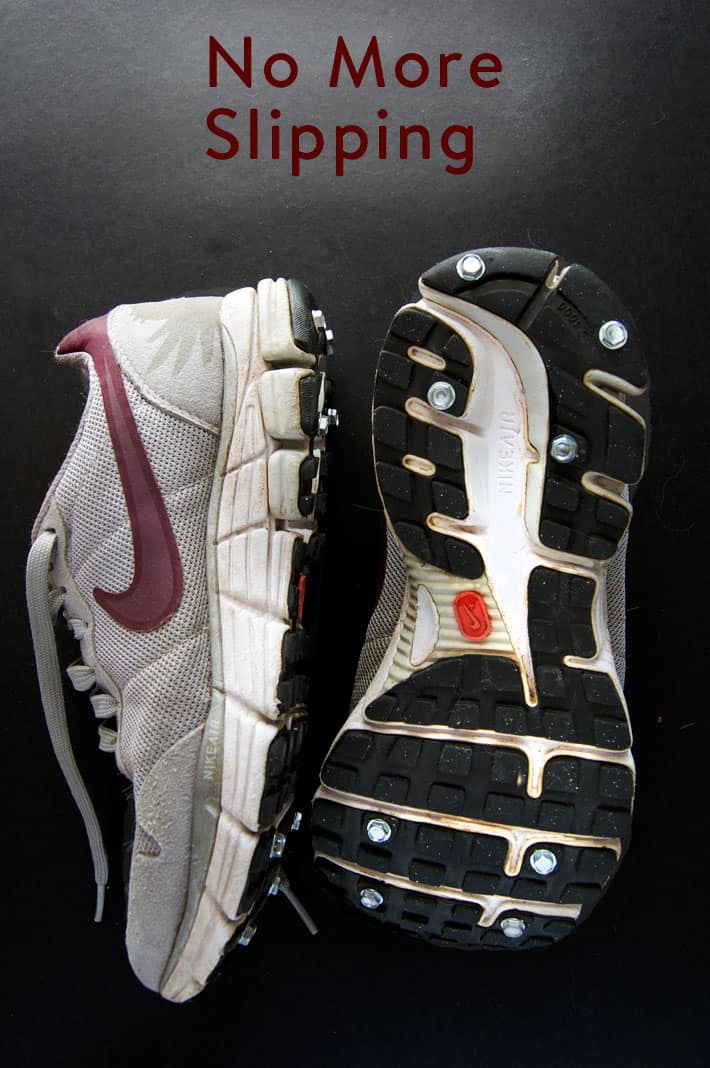 Here they are in action on snow and ice.

The one GREAT thing I can say about running is how superior I feel after getting home after a long run (which is 5 km for me).  No joke. I feel like I am better than you, my neighbours or anyone who has ever existed on this planet including but not limited to Mother Theresa, Elvis Presley, the Pope and whoever invented coffee.  They.  Are hacks.

While I, am an elite runner.