I would like for you to imagine me truckin' along,  on my way to the store.   Just walking on the sidewalk, minding my own business.   (To make the picture in your mind's eye incredibly realistic you might want to picture me as Christy Turlington.  'Cause we're often mistaken for one another on account of me looking exactly like a supermodel from the 1980's.)

So you have that image in your head?  O.K., then imagine my gazelle like legs getting tangled in each other as I do something worse than a faceplant.  I do an *almost* faceplant; which is where you don't completely fall but instead catch yourself in mid-air, give out a little toot and correct yourself before you actually hit the ground.  Instead of road rash you end up with a really red face and that gross tingling feeling in your toes that comes with a startling scare.  I hate that toe tingling feeling.

All because of a bird.  Now, I've been startled by birds before.

I have been pooed on.  I have ducked behind my steering wheel as they aim right at my windshield before laughing and swerving away, I have had a bird fly out of nowhere to take a single, big peck at my head.  But this incident was different.

This bird got me tripping all over my  (supermodel-like)  legs by taking a bath.  There he was, hidden behind the hedge in my neighbour's incredibly peaceful looking yard, fluttering his wings and splashing himself quietly in their birdbath.  I say "he" because let's face it, only a man would bounce around, bathing, NAKED for all the world to see and not give a crap.

And that was it.  I had to have a birdbath *immediately*.  With all of my heart I wanted a birdbath and I wasn't going to rest until I got one!  And then I promptly forgot all about the birdbath until 4 weeks later when I saw one at a flea market.  It was one of those typical black ones you see made of cast iron with a little cast iron bird sitting on the edge.  Not exactly revolutionary, but still ... a nice birdbath.  I could have purchased Martha Stewart's aviary PLUS her entire estate for the price of the birdbath.

O.K., it was only $200 ,but still.  That seems like toooo much for a birdbath.  I mean, let's face it, the bird is perfectly happy bathing  in worm filled puddles accented by cigarette butts on the side of the road, so ...

I made it with birch twigs I had leftover from Christmas and a wooden bowl that's seen better days I got at a garage sale.  You may not have a wooden bowl, but I'm sure you have something that would suffice.  If you don't have birch twigs, go out and cut some other twigs off a neighbours tree.  Be resourceful. 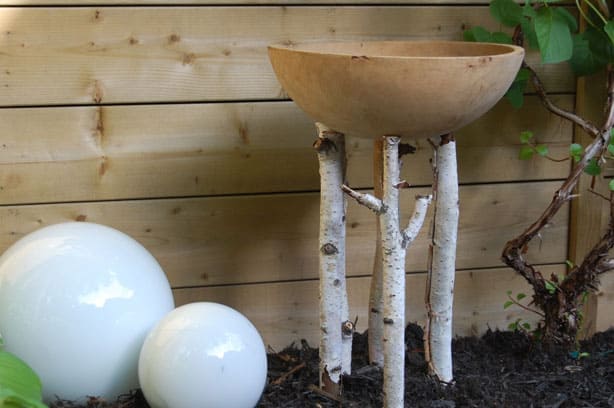 I researched a little about bird baths before delving into this and found that birds like bowls to be off the ground, but will indeed bathe in a bowl just laying in a garden. The depth of the water needs to be between 1 and 2 inches. So I didn't FILL this bowl up, I just put a little water in the bottom. I've only had it out for a day so I can't give you any report on how successful it is. Regardless of whether it attracts birds or not, I really like how it looks in the garden so it's staying. 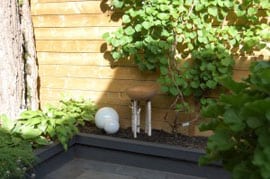 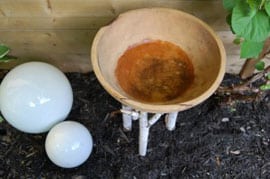 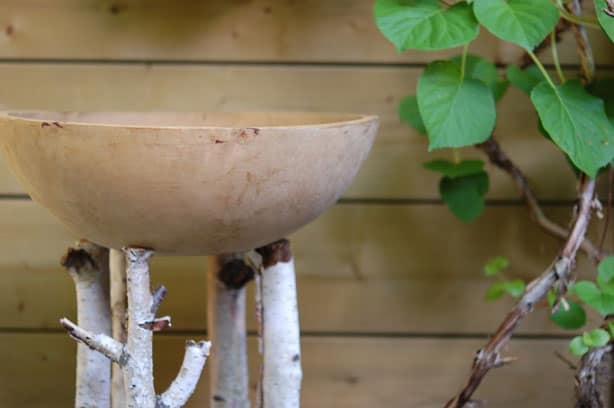 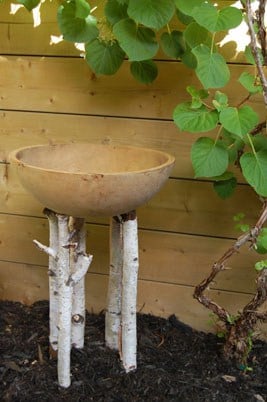 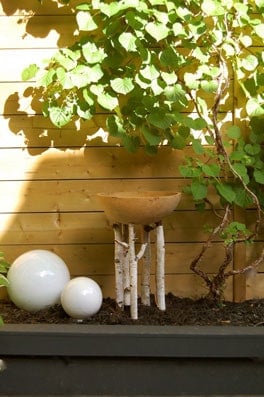 And just to prove you can plop a variety of things on top of your twigs, here's another bowl I had lieing around. It is also technically a bit too deep for a birdbath but I'm a risk taker like that. Besides ... this is the "How to Make a Birdbath for FREE" post. So ... I'm kindda making a point here that you can make do with whatever you happen to have. 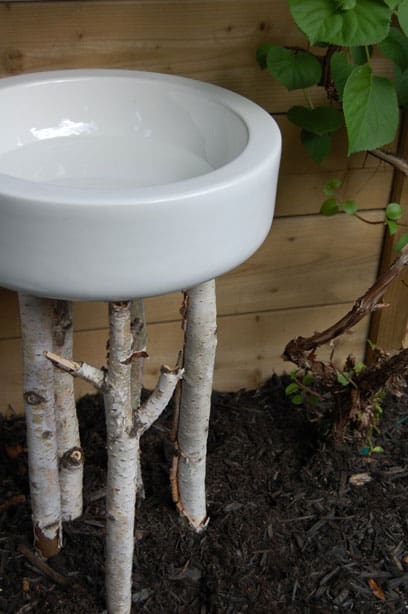 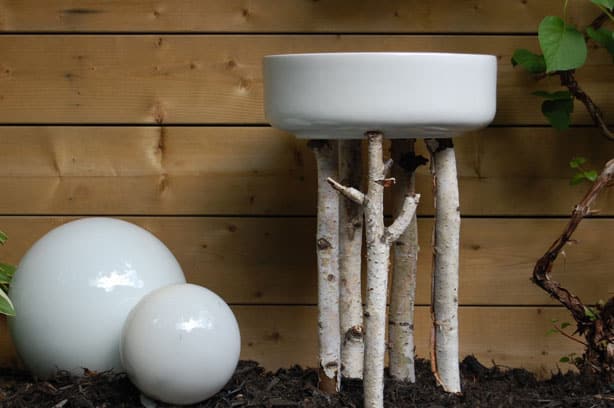 If you're going to do this yourself, the only thing you need to know is that your sticks need to be hammered into the ground.  At least 12 inches of them need to be in the dirt so they're good and sturdy for the heftier of birds that might come to bathe.  You know, the morning doves and the big fat pigeons and such.  So when you're picking your sticks don't forget you'll need them to be 12" longer than you want the height of the birdbath.

Tomorrow I'll have the $6 birdbath for you.  Well ... I mean, so long as no one asks me to appear in a George Michael video between now and then.