Demystifying how to make chicken broth.  What you need, how long it takes and the 2 best ways to store it. 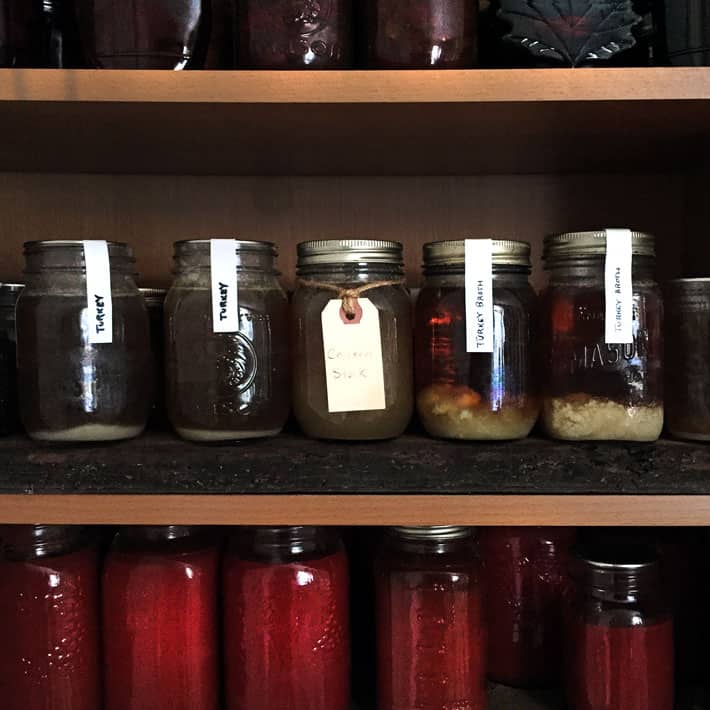 With the chilly months descending upon North America, all thoughts lead to soup.   And gravy.  And outrageously dry skin.

This recipe can help with 2 of those things, and if you’re really careful, maybe even all three.

If you’ve always been confounded by the thought of making your own chicken broth or stock (a thicker, more reduced, jelly-like version of broth that is now inexplicably called “Bone Broth” by anyone wanting to seem like a “foodie”) get ready to be unconfounded.  Once you learn how easy it is to make you’ll have no more excuses.  You’ll have to make it.  Why would you make your own broth you ask?  Well ’cause it tastes better.  A lot better.  Loads better.  Better.

First a rundown of what everything is.

What is Chicken Broth?

Chicken broth is the broth that’s made after simmering chicken carcasses that still have lots of meat on them.  It takes a minimum of 3 hours of simmering to get a good tasting broth.

What is Chicken Stock?

Chicken stock is a thick, gelatinous substance that’s made after simmering chicken carcasses and bones in water to extract both flavour and gelatin from the bones.  It doesn’t stay thin and liquidy like a broth. It sets up.  It takes a minimum of 6 hours of simmering to get a good stock.  12 hours is even preferable.

What is Bone Broth?

It’s what hipsters call Chicken stock.  Although I’m not sure they realize it’s the same thing.  The term became popular around the same time the paleo diet did, so I blame them.

How to Make Chicken Broth

There’s nothing to making your own chicken broth.

Add chicken, carrots, celery, onions, parsley stems, salt, pepper and water to a pot, simmer it for 3 hours and you have chicken broth.  Once simmered, strain it and store it. That’s all there is to it.

It’s really hard to screw it up.   You can basically make it with some chicken and whatever junk you have leftover in your crisper, but I know a lot of people prefer a proper recipe with measured ingredients as opposed to “throw whatever isn’t mouldy into the pot”.

I start my chicken broth months in advance of making it.  Every time I cook a chicken, turkey or debone chicken breasts I take all the leftover bits and bones and throw them in a plastic bag and chuck the whole lot in the freezer.  I just keep adding and adding to the plastic bag until I have what I think is enough to make chicken broth.  10 pounds or so.  You can also just go out and buy 2 stewing hens.

Then when the day comes to make the chicken broth, I give myself plenty of time to cook it.  It isn’t a lot of work, it just takes a while to reduce.  Like a hyperactive child that’s bouncing off the walls after a big day, you have to give it time to simmer down.  You want to make sure you aren’t starting it at 10 o’clock at night, because it takes a minimum of 3 hours to turn chicken and bones into broth. 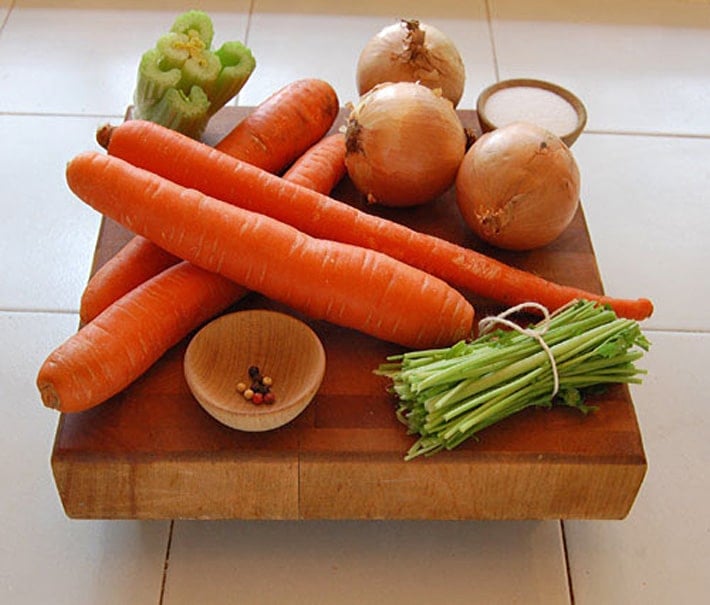 You’ll also need that whack of chicken parts I was talking about.  All this came out of my freezer, including the carcass from a Thanksgiving turkey.  I have been known to auction off the turkey carcass after Thanksgiving dinner to the highest bidder at our family dinner. 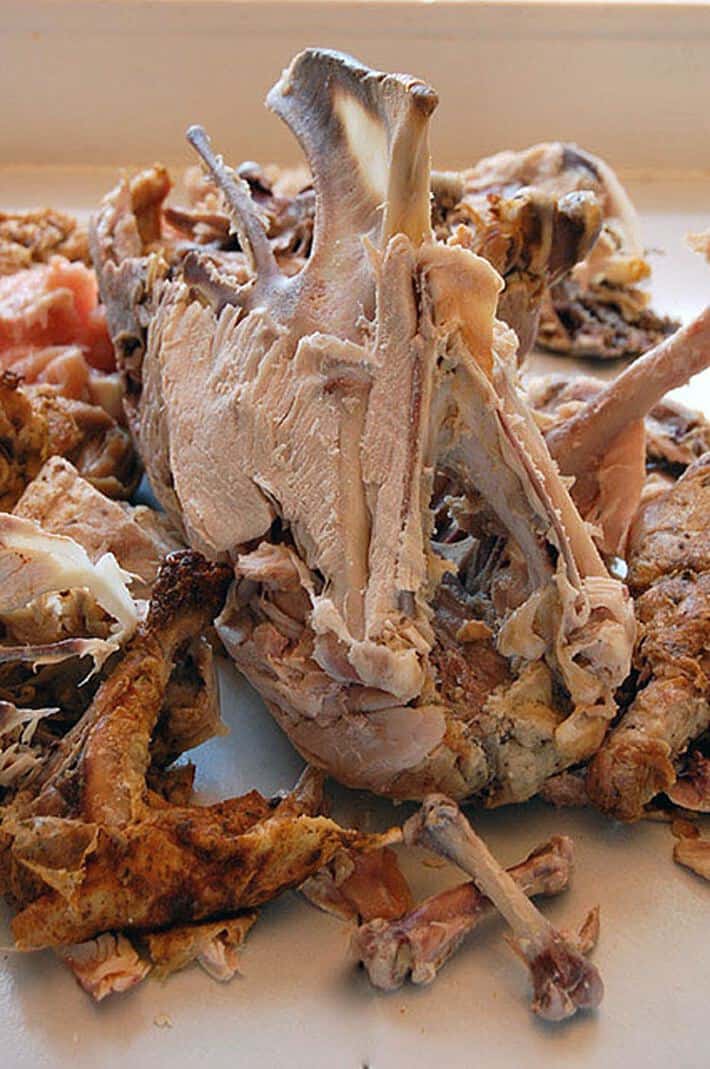 Just throw everything into a large stock pot … 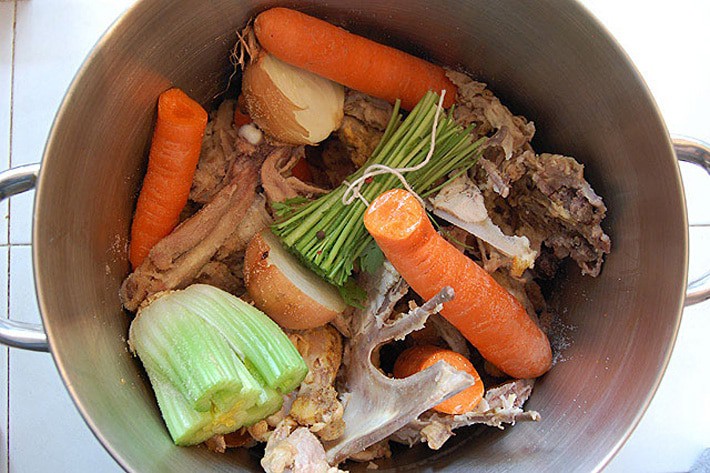 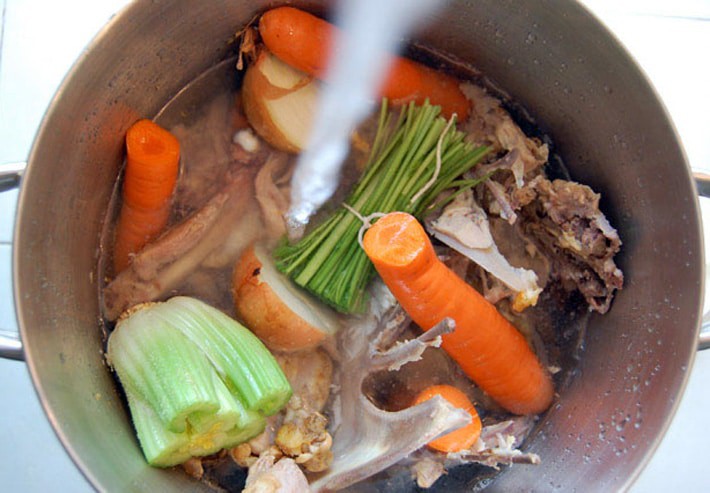 Bring the whole thing just to a boil, and then simmer for a mimimum of 3 hours.  Do not boil it for 3 hours .. simmer it.  After 3 hours give it a taste.  If it tastes like chicken broth, you’re done.  If you simmer it for another 3 hours or so, you’ll end up with chicken stock.  A more reduced, stronger, thicker version of broth.  Also, the more bones in relation to meat you use, the more jelly-like your product will be.

After you’ve simmered the broth down, strain it through a collander into a bowl.  Into a few bowls actually.  You’ve just made a LOT of broth.  Show off. 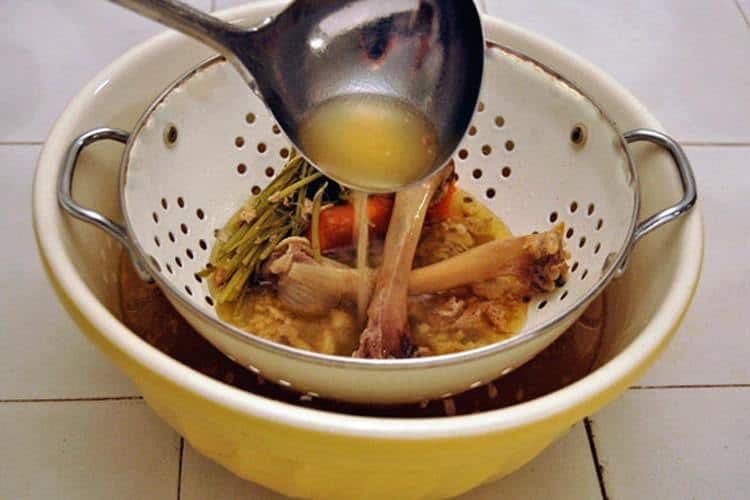 Then strain it again through cheesecloth to remove any little bits of stuff. 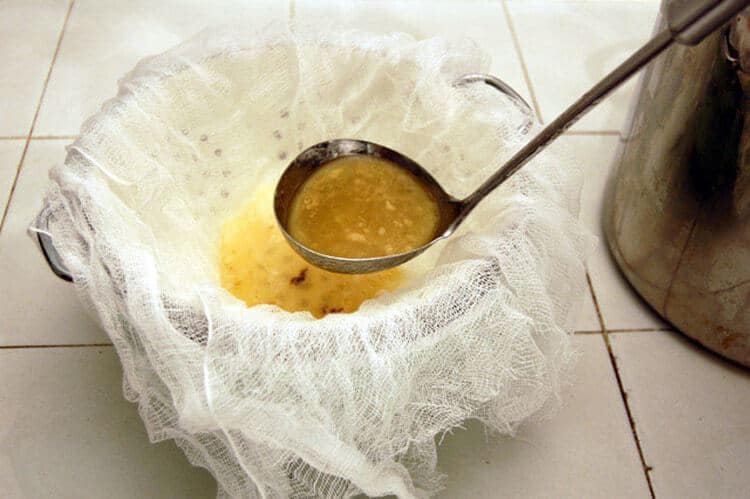 Once you have the broth fully strained stick it in the fridge overnight to allow the fat to rise and solidify at the top.  Once it’s done that, you can take it out off the fridge and remove the hardened fat with a spoon. 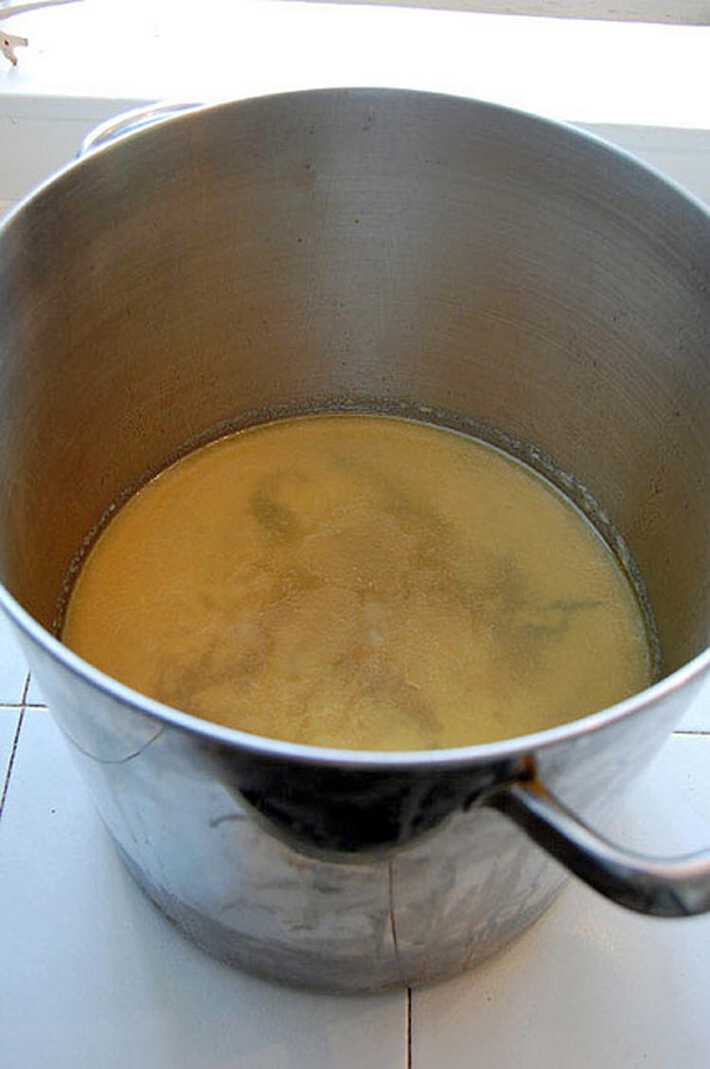 At this point I used to measure out 2 cup portions into baggies and lay them flat in my freezer so they were easy to stack and grab when I needed them.  Now, I can all of my broth because it’s a bit more work to do, but way more convenient to have jars and jars of broth in a cupboard ready and waiting to use.  Learn how to can chicken broth in this tutorial.

This recipe ended up making me 21 cups of broth.  I used it the next night to make a delicious stew.  I also use it for most soup bases and whenever I’m roasting something, I use it in the bottom of the pan as the base for gravy instead of using plain water or potato water.  If you can’t boil down chicken guts, making the gravy with homemade broth is your next best option. 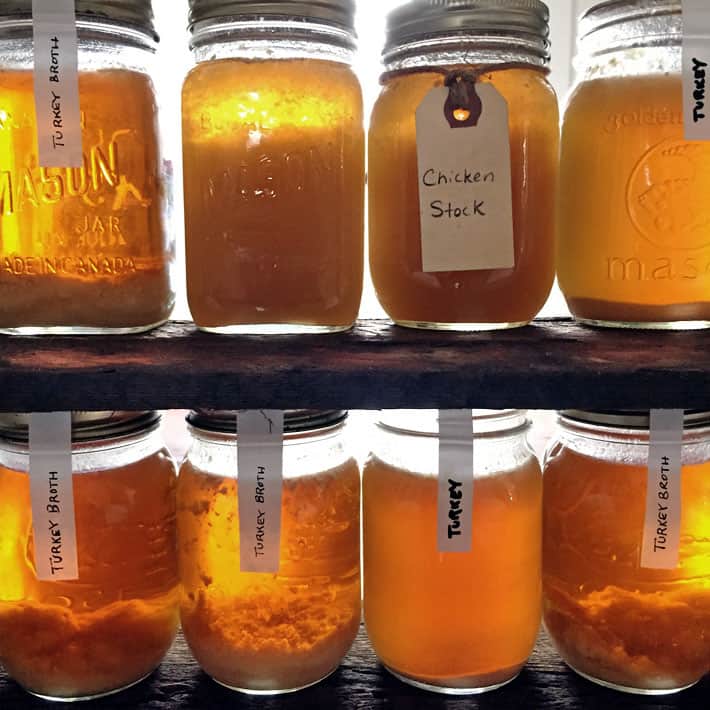 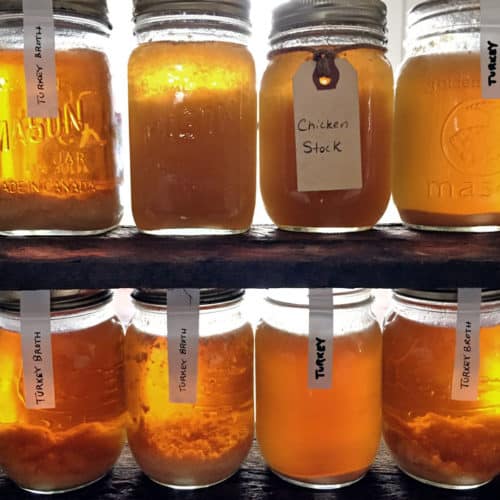 For me the smartest way to make chicken broth is ALL AT ONCE.   I freeze all of my chicken and turkey carcasses throughout the year and once or twice a year pull them out of the freezer to make a huge batch of broth.  So start saving those leftover bones and meat.  If you want to make it right away though, you can buy 2 stewing hens and use those. :)
5 from 3 votes
Print Pin Rate
Course: Canning/Preserves
Cuisine: American
Servings: 22 cups
Calories: 160kcal
Author: Karen 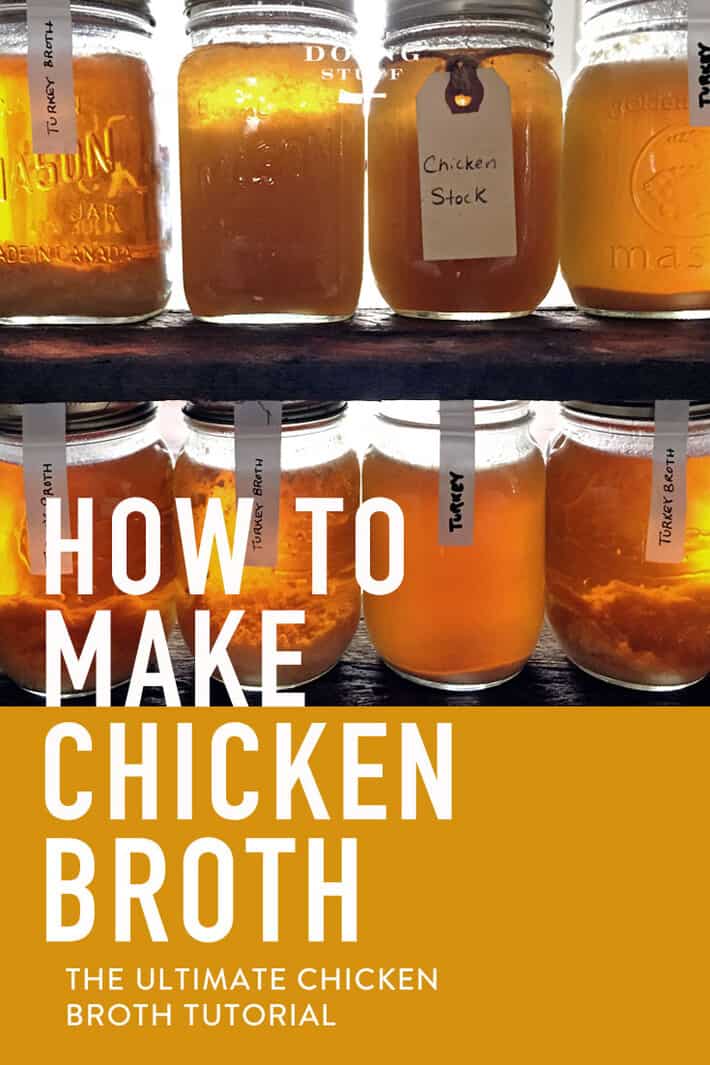