Hold on. WAIT right there. Before you ignore this post on how to replace the carbon brushes consider this … most appliances have motors, most motors have carbon brushes and the most common thing to stop a motor from working is worn carbon brushes. 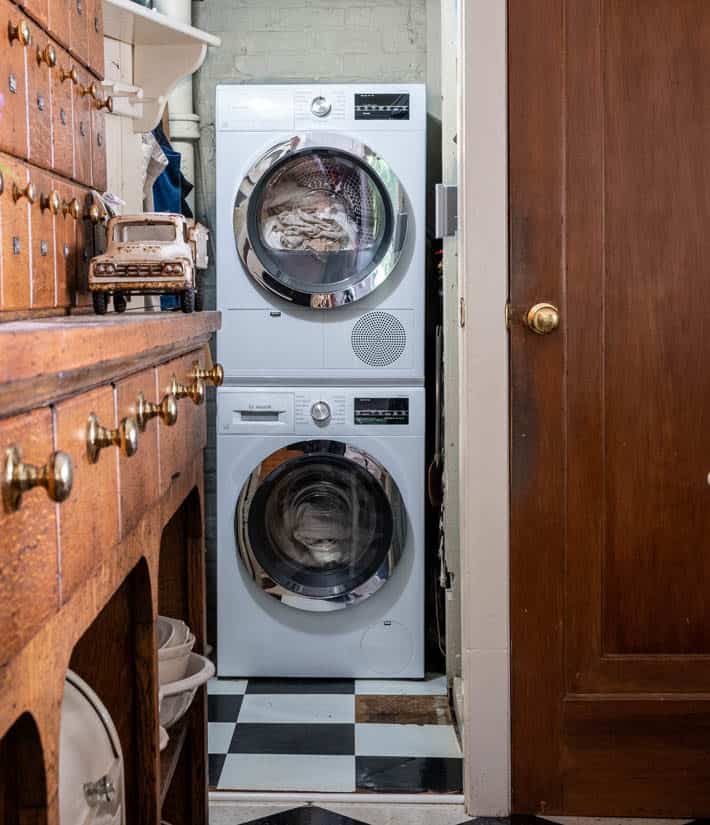 If you know how to replace them you can fix almost anything motor and save hundreds of thousands of dollars in your lifetime. Total exaggeration in terms of money saved unless you happen to own a nuclear power plant, but I had to get your attention.

Just to suck you in a little more, here's a list of things that usually have motors with carbon brushes.

What has a carbon brush?

Not all motors have carbon brushes that you can replace, but most of them do.  And it really is as easy as replacing a battery.  Or close to it anyway. That's another tiny bit of exaggeration but I can sense you need a little encouragement.  It's way easier than getting rid of back fat.  I can guarantee that.

This … is a carbon brush.

A carbon brush is basically the "thing" that conducts the electricity to the motor.  It actually conducts it through the motor's commutator, but since I don't care about that, I figure you don't.   Don't worry about what a commutator is.  Nobody knows and nobody cares.

Carbon brushes are built to wear down.  If they didn't wear down, and they were constantly rubbing hard against the (nobody cares) commutator it would damage the commutator.  Which is a bad thing to do even if you don't care about the commutator.

So carbon brushes are made of a material that is softer than the commutator.  After years of wear, they end up being just tiny little nubs and need to be replaced because they no longer conduct electricity to the all important (but we don't care about it) commutator.

If the motor stops running, or the thing stops turning, sucking, blending or mixing … it's probably worn carbon brushes.

To replace them you need to do two things.  You need to find out WHAT carbon brushes your motor takes and then you need to buy them.

They arrived within 4 or 5 days.

So let's do this.  Let's replace carbon brushes!  Because it's FUN and we're FUN and everyone's here so we might as well!  See?  Isn't this the most exciting thing you've ever read about?  And you thought this was going to be boring.  Hah.  I showed you.

I'll be showing you how I replaced the carbon brushes on my Bosch Front Load Washing machine.  This is the machine I owned for 20 years and only replaced recently.  The technique will be similar no matter what the appliance though.

Remove the motor.  Sounds scary but isn't.  O.K., it was a little scary pulling the motor out of my washing machine but now that I've done it I realize it really isn't scary at all and in fact I immediately felt superior to pretty much everyone else in the world the moment I did it.

Removing the motor from a hairdryer won't be nearly as scary.

Always UNPLUG whatever you're working on before you work on it.

I removed the back cover of my washing machine and located the motor with my eyeballs.

Any electrical that was attached to the motor got disconnected.

There was this little green wire ... 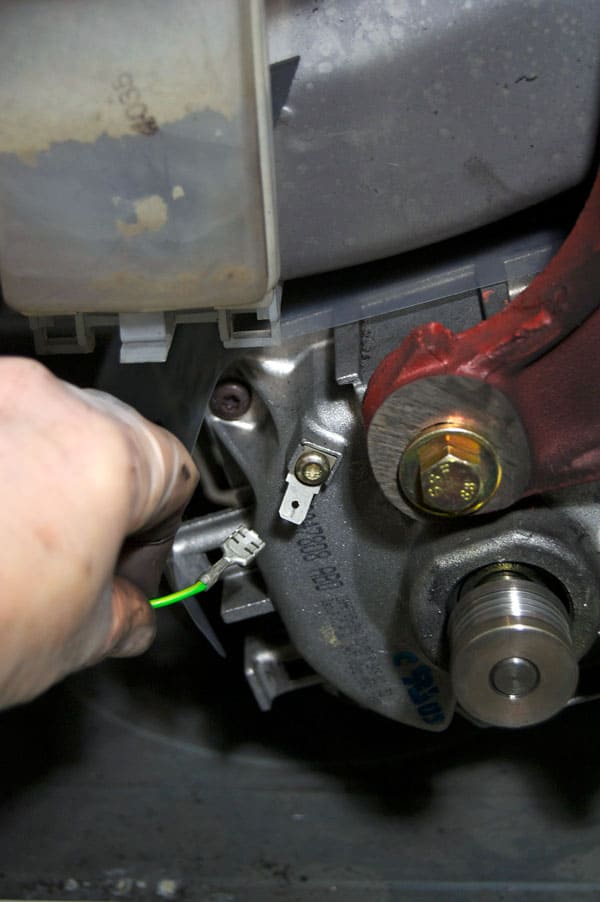 And this big plug of wires. 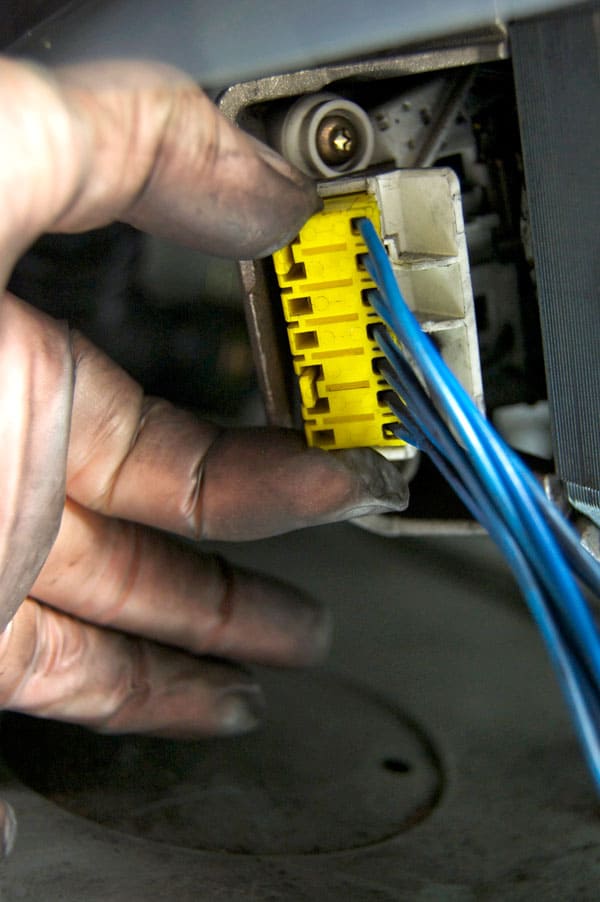 The inside of a washing machine and motor is filthy.  Wear surgical gloves. 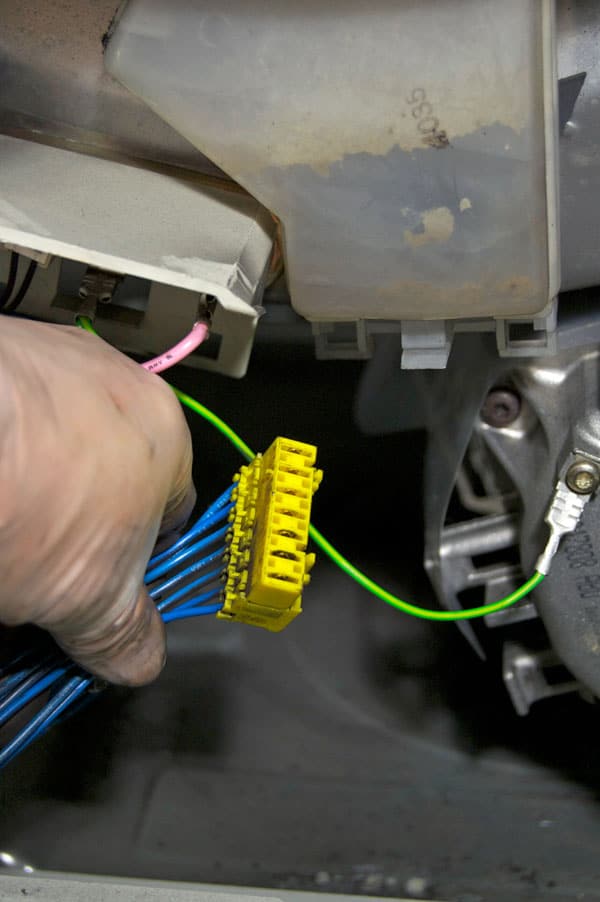 Once the electrical is disconnected you can remove the motor.  This particular motor was held in by 2 bolts.  One at the front of the motor and one at the back.

Loosen the bolts.  First the one at the front. 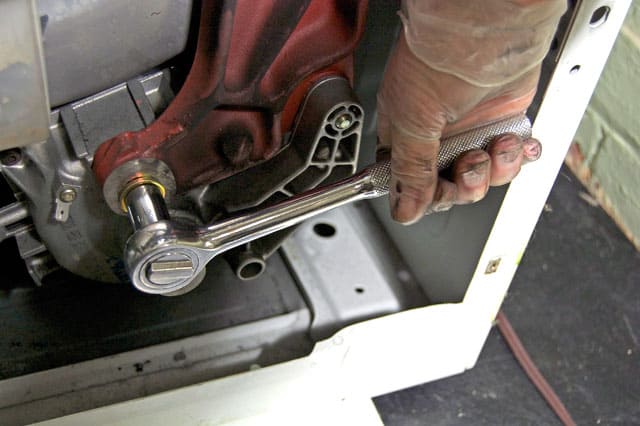 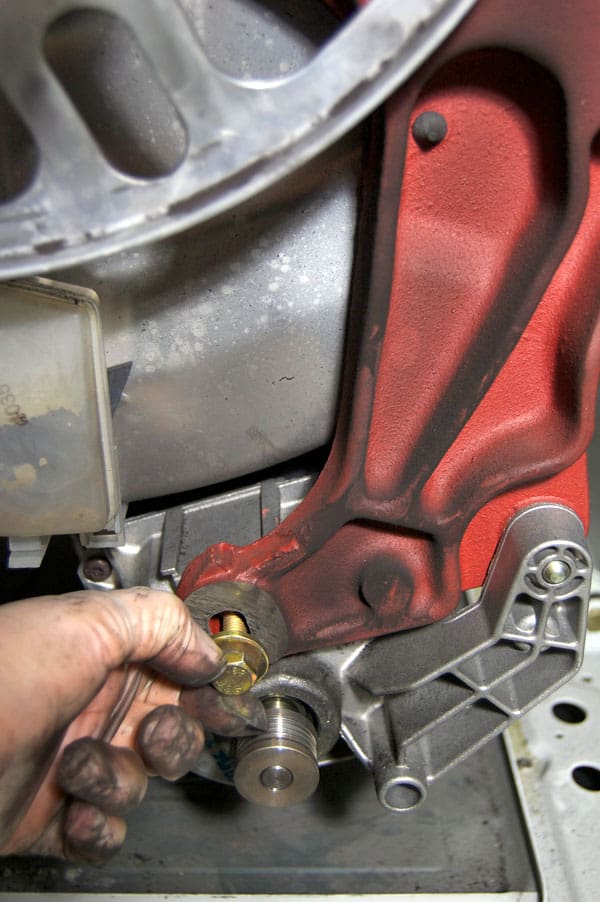 And then the one at the back. 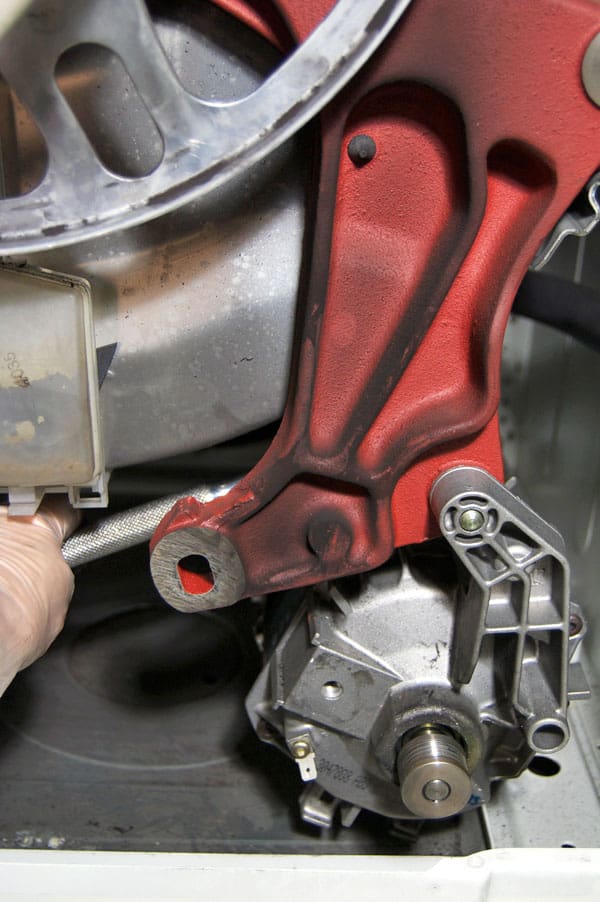 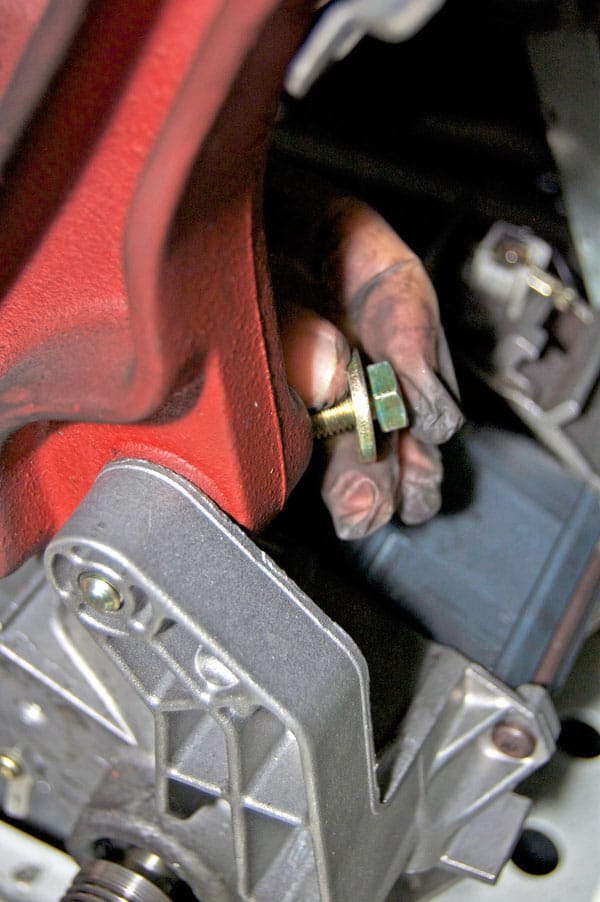 Now the motor will pull out with a little wiggling and work. It doesn't weigh much.  A few pounds, so don't worry about that. 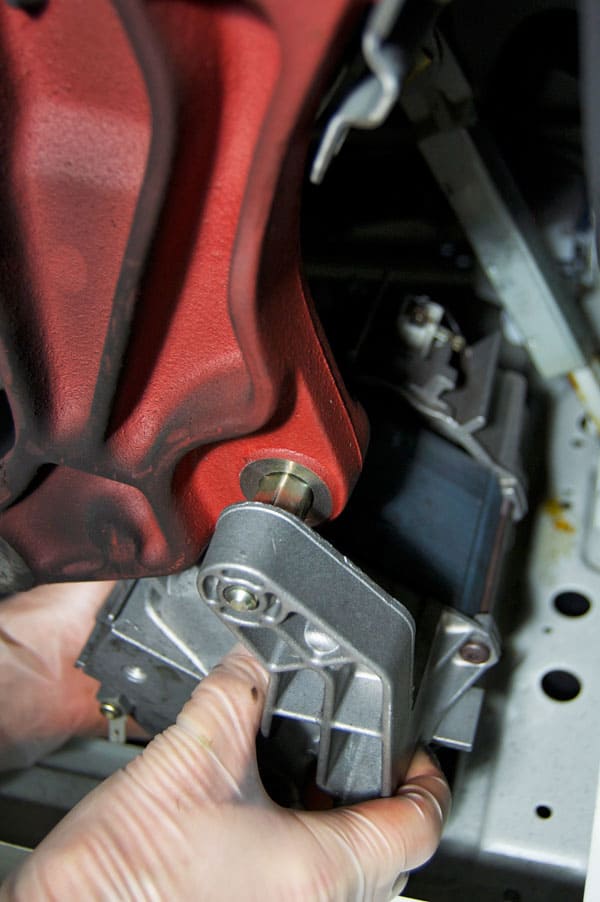 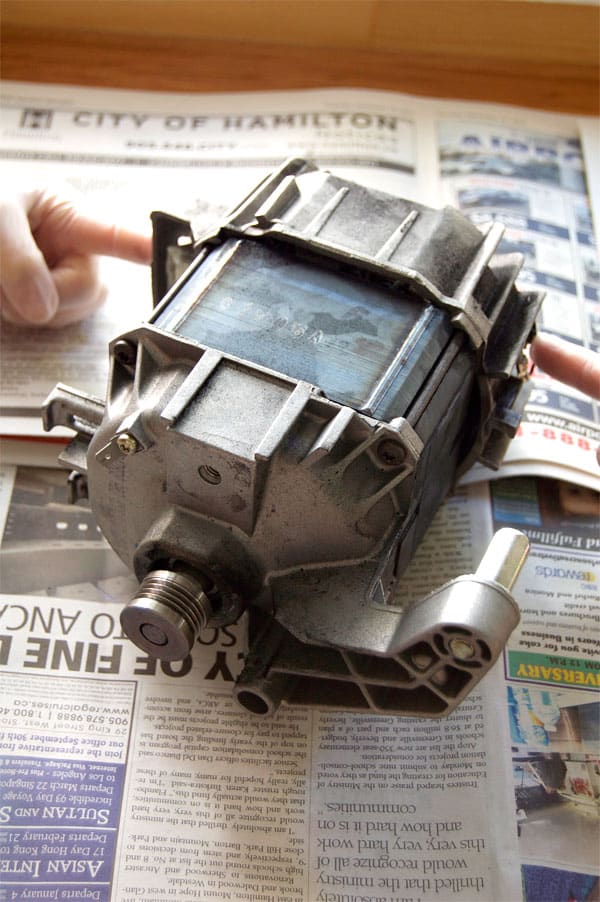 You can recognize the carbon brushes by the clips.  This is what you're looking for. 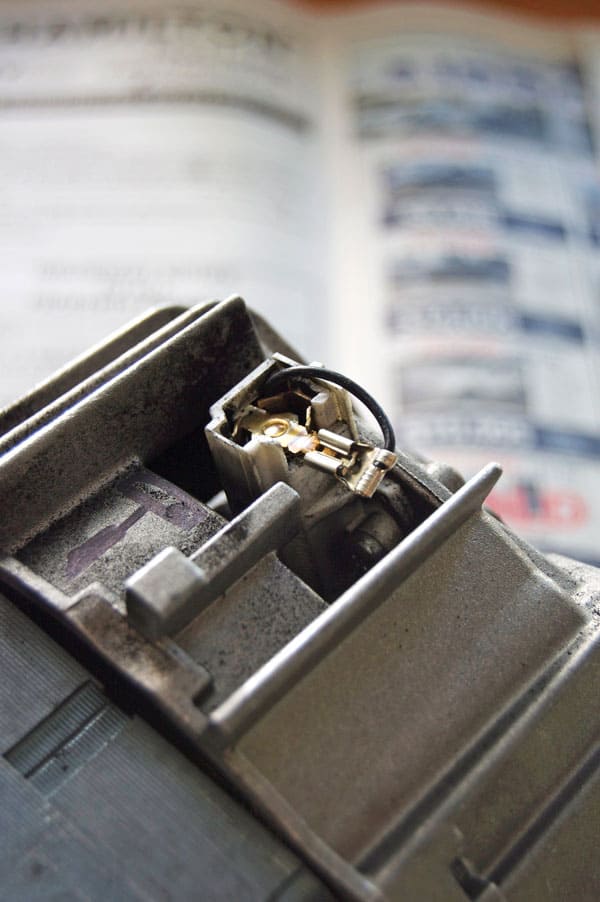 Simply pull the electrical connection apart either with your fingers or with needle nose pliers. 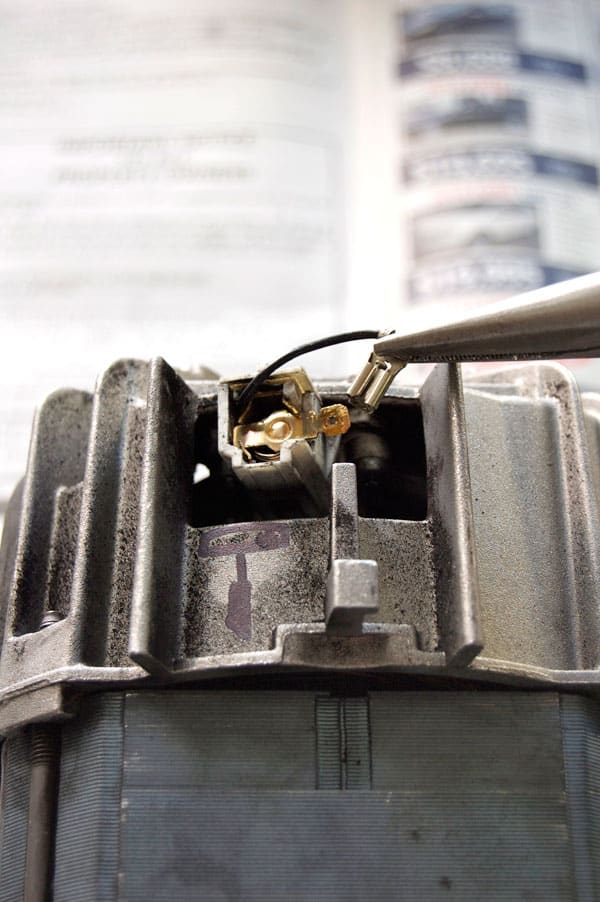 The actual carbon brush is held in place by a small brass clip which needs to be wiggled out of its spot. 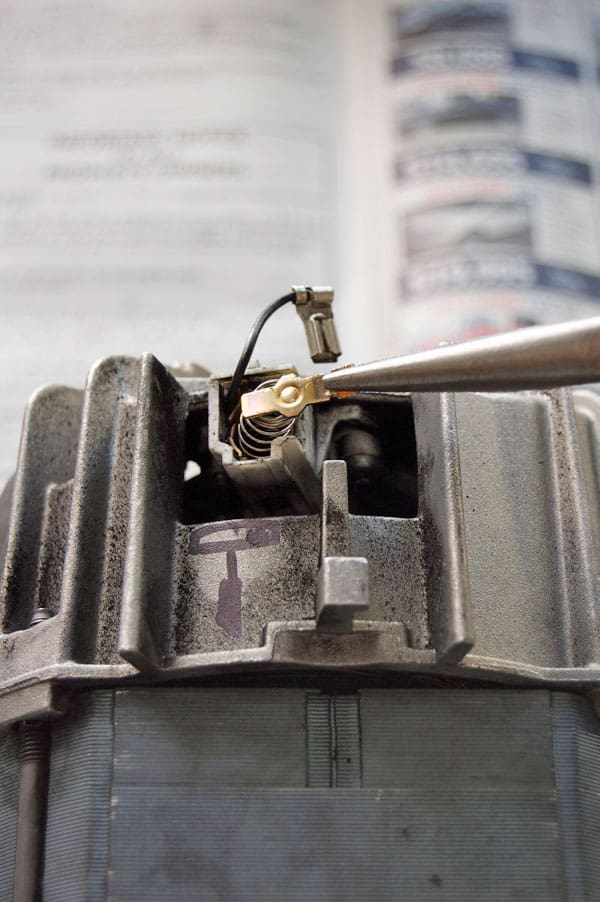 Then just give a little pull to pull the old brush out.   Make sure you pay attention to what direction the carbon brush came out!  It has a beveled edge and the new one has to go in the same way the old one came out, otherwise the brushes will be rubbing on the (we don't care) commutator the wrong way and won't work. 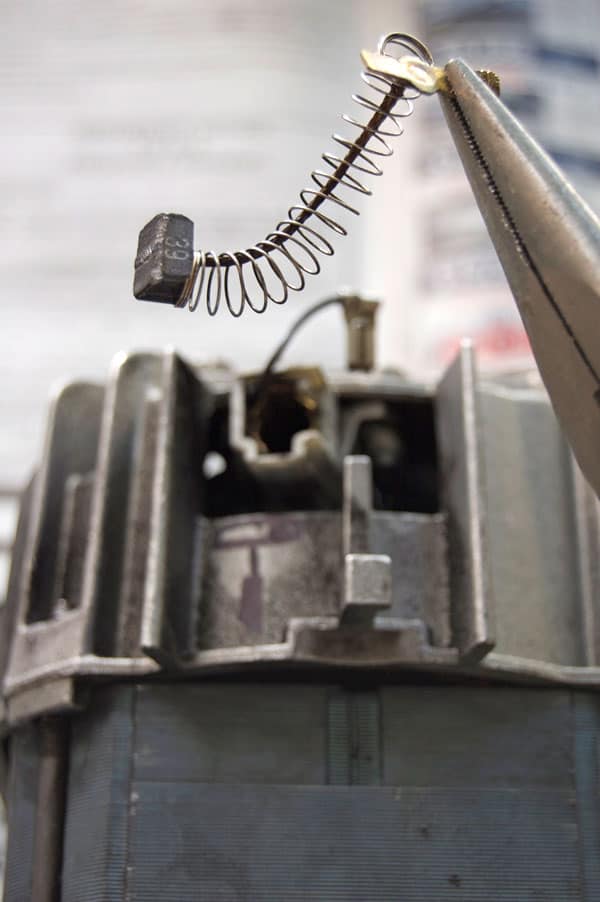 As a reminder, this is the old brush beside a new brush.  You can see how worn down the old one is.  No wonder it didn't work anymore.  I wouldn't work if I was that worn out either.

Now it's time to put the new carbon brush in. 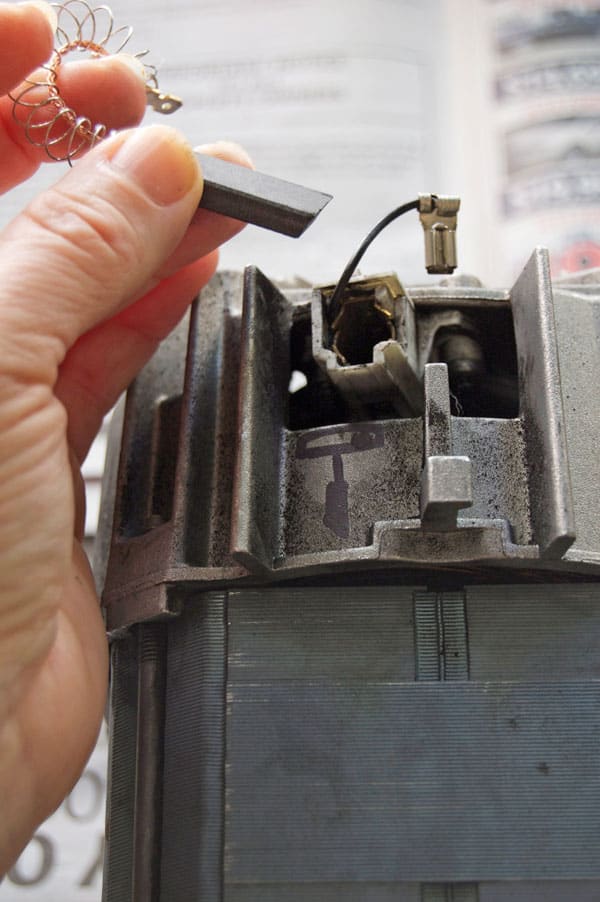 Just feed it into the hole you took the one one out of, making sure to put it in the same way. You can see I drew a picture with a Sharpie on my  motor so I wouldn't forget which direction to put it in. 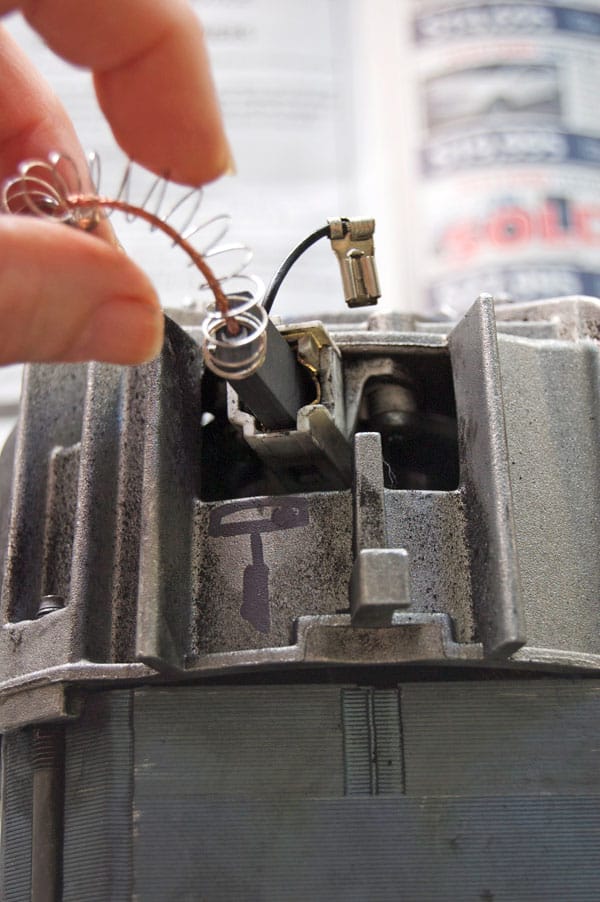 I had trouble getting it all the way down so I just used a bamboo skewer to coax it down. 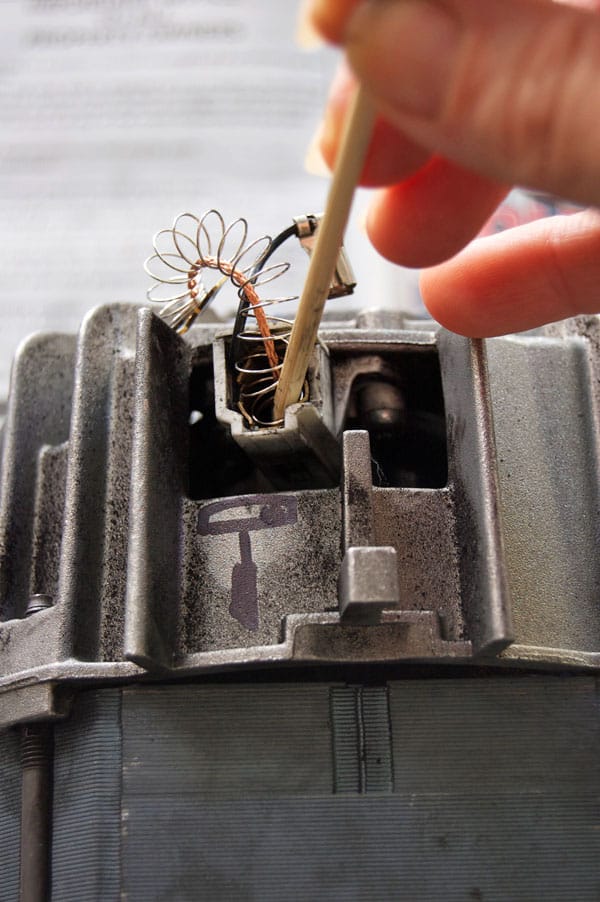 Squishing the springy coil down takes some patience and fiddling.  Just keep at it and it'll all go down.  Then insert the clip into the slot. 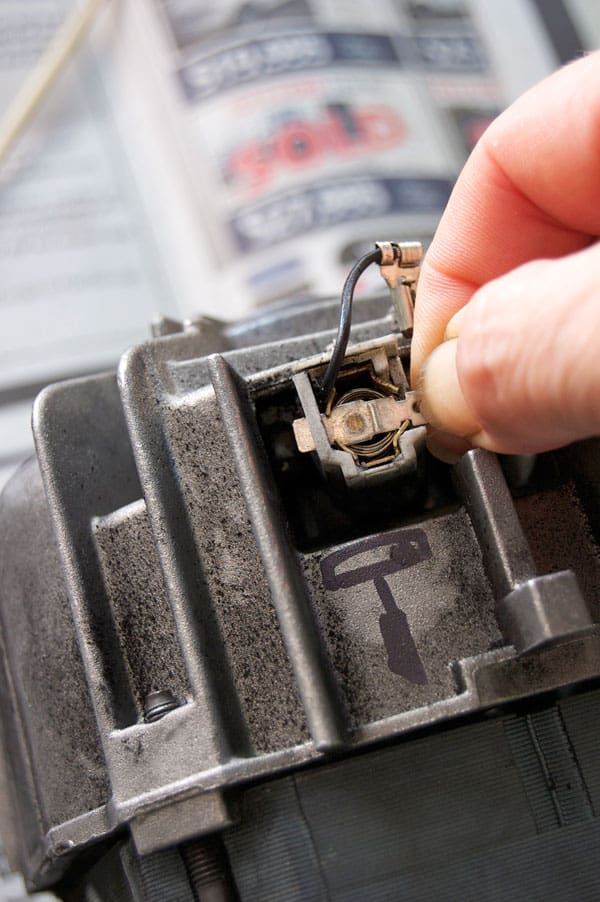 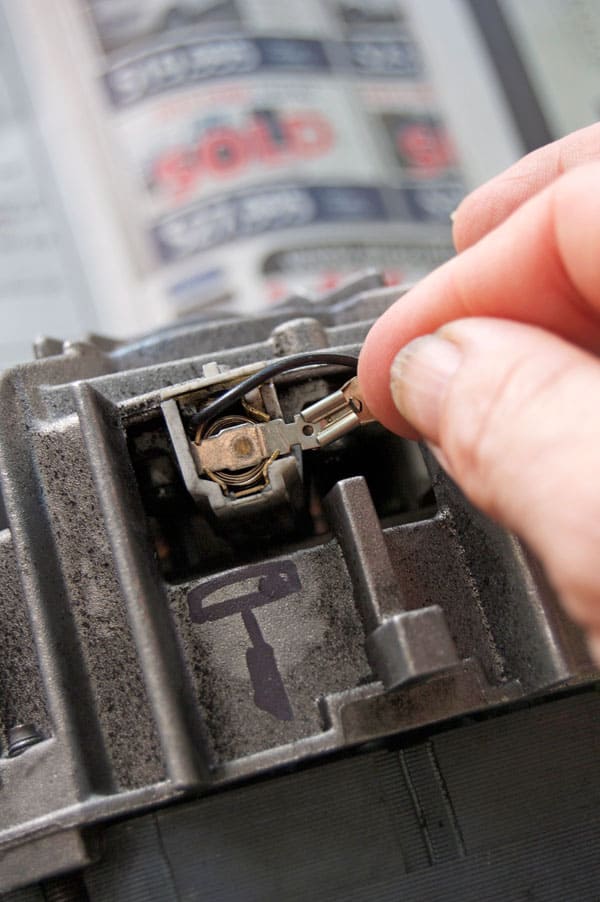 And you're done.  Now replace the other carbon brush the exact same way. 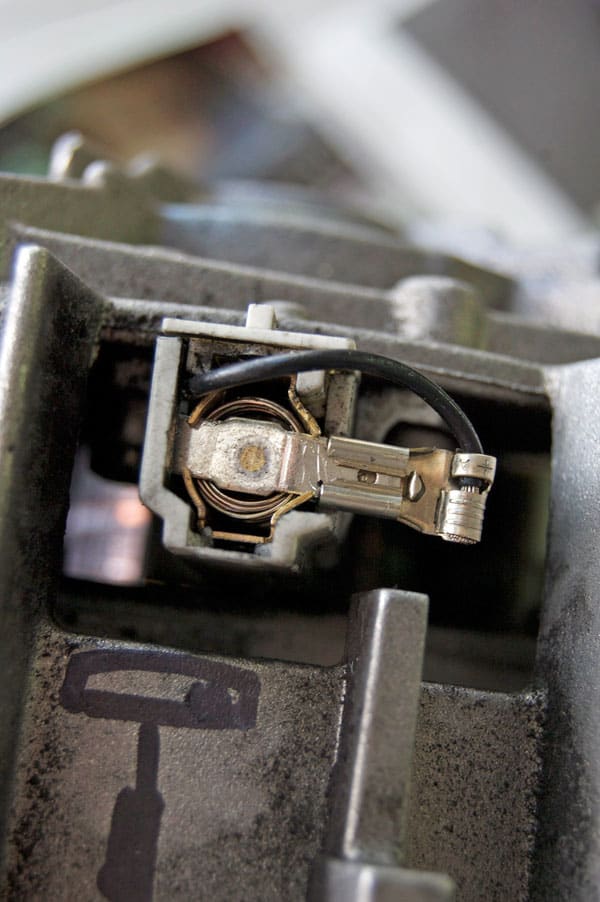 Drag your motor back to your appliance, in this case my washing machine, and put it back in place.

I don't know about you but I feel confident that I could fix pretty much any problem now. 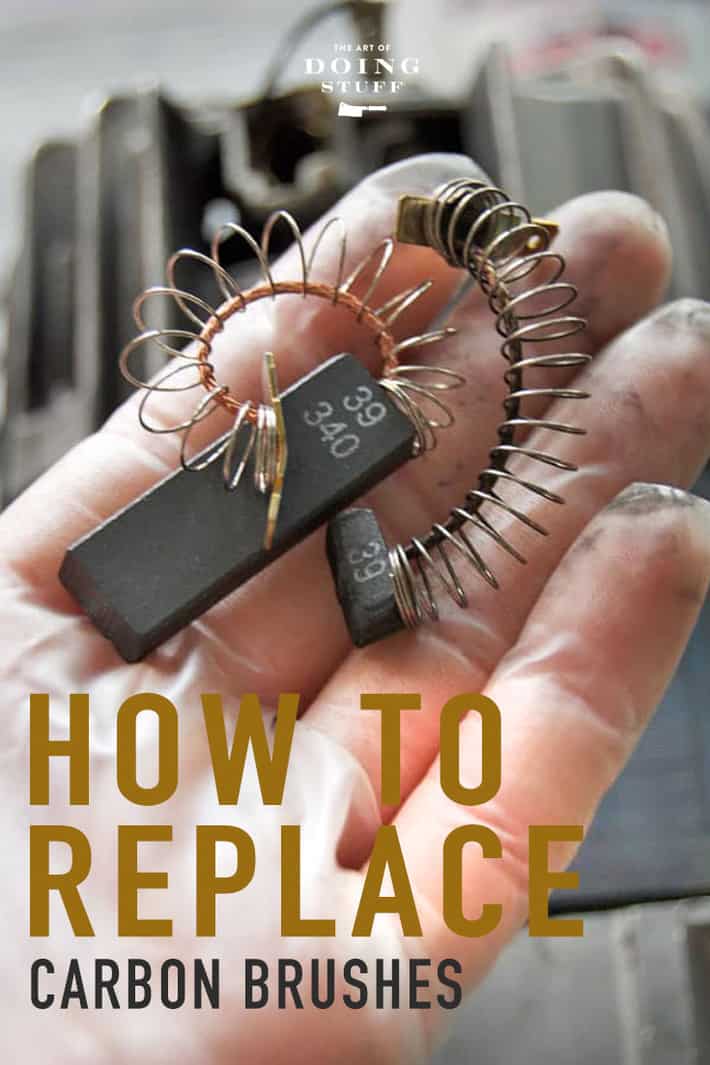