I Love You So Much You Make Me Sick

I love you so much you make me sick.  No honestly.  My love for you is so strong I’m physically ill.  Yup.  I’m not talking to *you* of course.  Unless you’re my boyfriend.  Are you my boyfriend?  You’re lucky if you’re not ’cause I’m mad at him, ’cause he made me sick.  Because I love him.  Nothing contagious.  Don’t worry.

Confused yet?  I’ll try and explain this to you as best I can.  Have you ever done something for someone to support them just because you love them?   Stand out in the rain cheering your father the marathoner on.  Maybe you’ve cut your hair a certain way because you know your husband or wife likes it that way.  Even if you don’t.  Or perhaps you’ve sworn off wearing high heels in the house because it terrifies your dog.  Either way it’s a show of love and support.

I love and support my boyfriend all the time. This time it made me sick.  Why?

Because  my boyfriend does CrossFit.

Why does that make me ill you ask?  Well that’ll take a little bit of explaining.   CrossFit is a community that likes to do things to the extreme.  It’s a method of working out that really just incorporates all the things you used to do  in gym class.  Things like jumping rope, chin ups, sit ups and handstands among other things.

The difference between gym class and Crossfit is the vomitting.

CrossFit’s mascot is called “Pukey”.  Basically, if you aren’t close to or actually throwing up, you aren’t working out hard enough.  When my boyfriend first joined this rope jumping band of lunatics I went with him.  He thought it’d be nice if we did something together.  So I took some classes.  The truth is, I went to CrossFit exactly twice.

After the first time I was so sore my muscles routinely gave out every time I tried to sit on the toilet.  No joke.  I’d get halfway’s sitting down and my legs and stomach muscles would collapse in pain and I’d crash in a heap on the toilet seat.  Then I would wince and say Ow.  And then I’d spend the next 1/2 hour trying to  to stand up again without using my legs.

This is a picture of me 3 days after my first Crossfit workout.  My boyfriend thought taking me for a brisk walk would loosen up my sore muscles.  I had to look for ramps to walk down because I couldn’t physically step off a curb.  I know this because when we first started our walk I tried to step off a curb.  And I fell down. 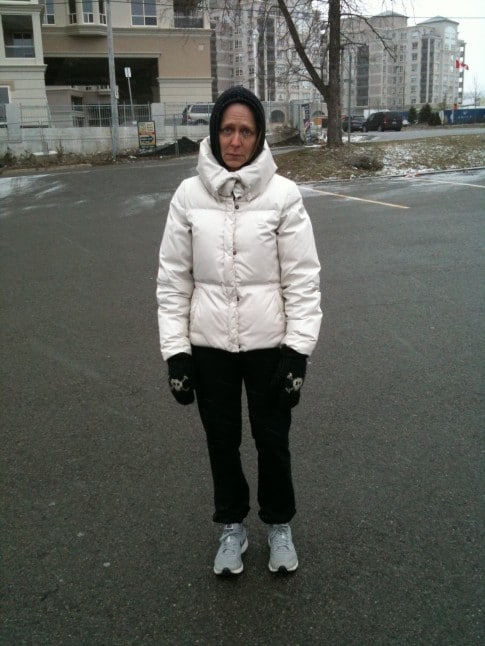 The second CrossFit class I took (yes, I went back because I wanted to be loving and supportive) I got a “special instructor” for the “special pupils”.  The ones just starting out.  My special instructor was a guy who taught CrossFit on the side.  You know … on his days off from Extreme Fighting.  Nope.  I’m not joking.  Needless to say, class 2 of CrossFit didn’t end any better than the first.  Unless shock is better.  If shock is better then I did much better the second time around.   Because class 2 ended with me going into shock.  Just for a few hours.  I used those hours to contemplate the sanity of my boyfriend who loved CrossFit.

You see, he too went into shock during his first or second CrossFit class. But he loved shock!  He thought shock was fantastic. The owners of the CrossFit gym made him sit down and drink some juice until the nausea and chills passed.  He was treated special because of his shock and he liked it.  When I told my “special instructor” I was feeling sick and asked whether people actually threw up while working out his response was Not as many as I’d like, keep goin’. I didn’t get any juice.

It’s amazing the pain we’ll put ourselves through to support someone we care about.   My boyfriend continues on with CrossFit.  He loves it.  And I continue to support him.  From the couch.  With a Costco sized bag of Cheezies.

As a comparison, this is what my boyfriend looks like after a self induced CrossFit workout while on vacation. 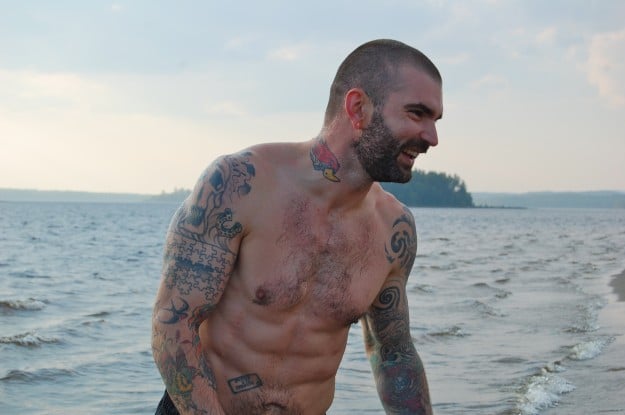 Happy, fulfilled, laughing.  Clearly one of us has an issue.

I’m getting off track here.  So the point of this is, my boyfriend takes CrossFit.  CrossFit members like to do things to the extreme.  Because of this I felt quite ill this weekend.  His gym has decided to go on a Meal Plan.  Not a diet.  A meal plan.  Their leader has challenged them to eat better for 8 weeks.  We already eat well. I cook everything from scratch and I always have at least 2 vegetables with dinner.  What more do these people want?

We just finished our first week of “eating better”.  And I’ve never felt so sick in my life.  No potatoes,  no rice, no grains, no bread, no starchy stuff at all for this first “detoxing” week.  My body is revolting.  So to speak.  It’s kindda cute actually, considering my age and all.

I’m writing this post from the comfort of my bed with two cats laying beside me, showing me their love and support.  I’m feeling lethargic, muddleheaded and have I pains shooting through my stomach.  These are the symptoms I can tell you about.

My boyfriend?  He’s being supportive.  In fact, he just called to see how I was doing.  From CrossFit.