A couple of months ago I had a very minor, hardly worth mentioning actually,  nervous break down.

And chickens eating, then pooping out plants.

As much as I loved the romantic notion of chickens wandering around my backyard, I was not so in love with the reality.  Because the reality is, no matter how many times you quote Emily Post to them, chickens have horrifying hygiene practices and terrible manners.

When's the last time  a friend came over, shoved their face in the dirt, ate all your perennials, pulled their pants down and pooped on your patio?  Since most of my friends passed the age of 40 that hardly ever happens at ALL.

So I made the decision this spring to put up some gates in between my side yard where the coop is, and the rest of my backyard.  With a little help from  my design friend Carol Reed.  I wanted something quick and easy to do, it needed to be see through so I could watch the chickens and it had to be high enough so they couldn't jump/fly/scramble over it.  It also had to blend in with my farmish coop area and my contemporary backyard area.

Within 2 days, this is what Carol came up with.  On the fly.  Without ever actually seeing anything in person. 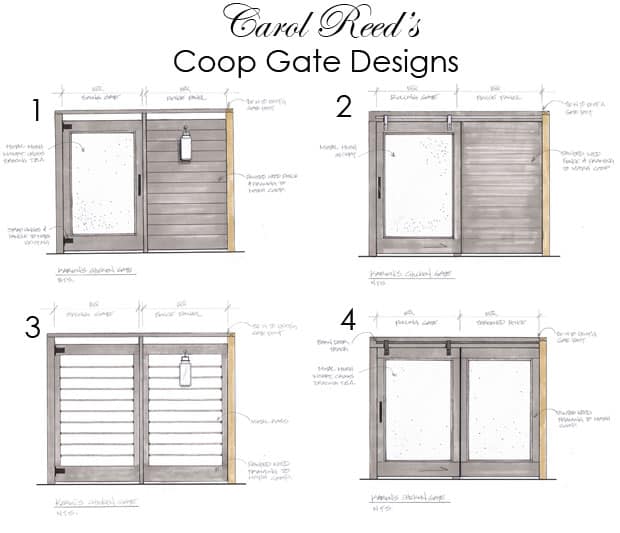 I loved every single one of them, but I based my decision on having the area be as visually open as possible AND ... ahem ... whatever was going to be the easiest to build. Ahem. Because, holy crap, I get sick of building stuff and being in a mess all the time.

Nobody believes me when I say that, but it's true.  Mostly.

So, easy and see through were my biggest factors.

1 week after receiving Carol's design suggestions I had built option ... 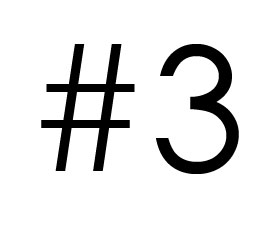 The gates made out of wood stained the same colour as the coop, with round horizontal metal bars.

And it couldn't have been easier.

Take a look at this, which I accidentally happened across at Home Depot. It's a kit that's meant for building deck railings. 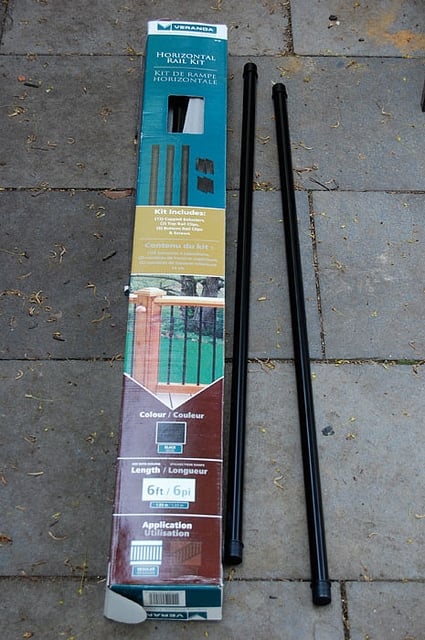 And pre-drilled 2x4's. If I lengthened this, shortened that, turned it on its side, added a few pieces of wood here and there ... it would fit perfectly. 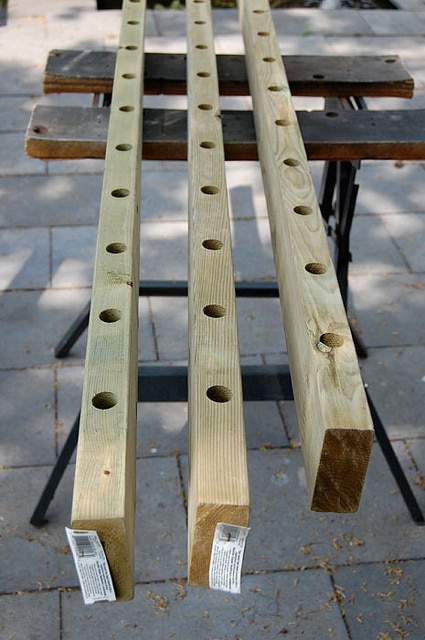 I pre-stained all of the wood I was using because it is always easier to paint before rather than after.

I literally inserted the rods, screwed 4 pieces of wood together and hung them up.

Kay, there was a bit more to it than that, but I've decided not to get into it because I have decided there isn't a single other person out there who has the need to build chicken gates.

O.K. maybe there is someone else out there who needs chicken gates, but if you're the buildy type you should be able to figure out how to do it just by looking at these pictures.

I will mention that I used something called double acting barrel hinges. These you might recognize from cafe doors. Saloon doors? The kind of doors that swing both ways. They're the Anne Heche of hinges.

They have about one billion other names, but they all do the same thing. They allow a door to be pushed open or closed from either side of the door. 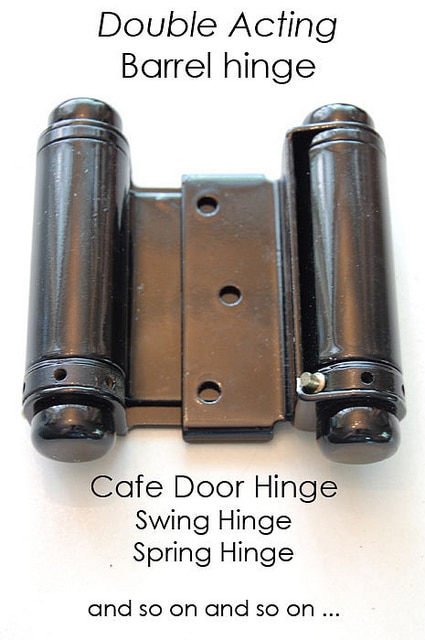 If you ever plan on installing cafe door hinges you need to have 2 hinges on the top and 1 hinge on the bottom to deal with the weight of the doors. The bigger the door, the bigger the hinge you need. There you go. That's the only building lesson you're going to get today.

These gates took 1 weekend, 2 advisors (Carol Reed and my carpenter neighbour Grant) and 3 tools. A saw, a drill and a hammer. And I'm not even really sure I used a hammer. 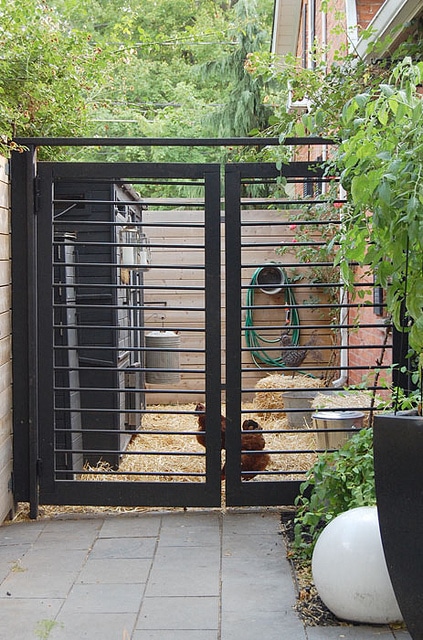 The gate don't look level if you look at them at the bottom against the slate, but it's because I laid the slate so it slopes out of the backyard for proper drainage.  So it's an optical illusion. 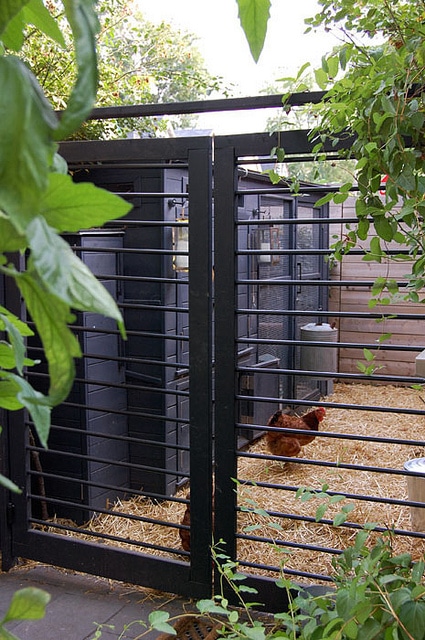 I still need to add a wire brace to run from corner to corner on the doors to keep them from sagging.  Which I'll get to.  Eventually.  One day.  I think. 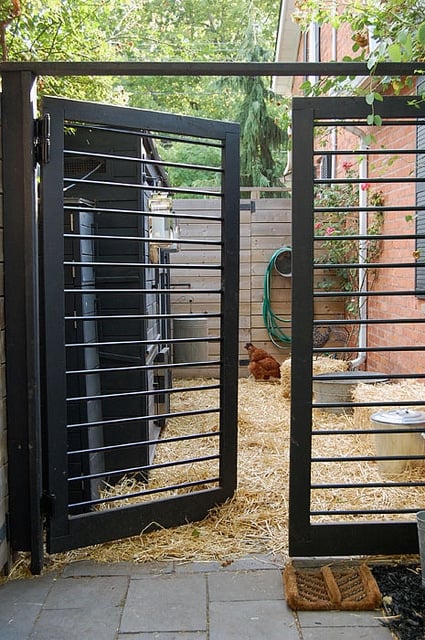 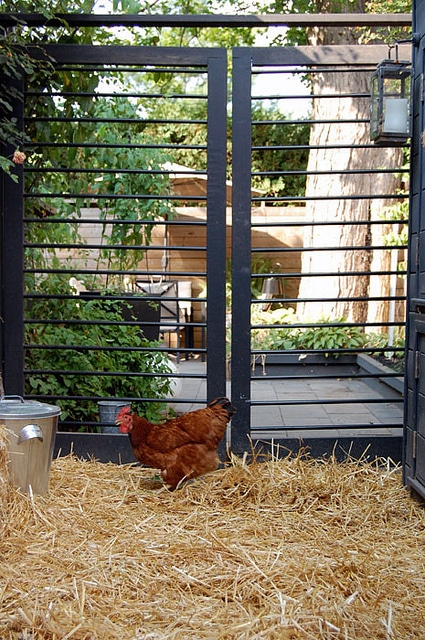 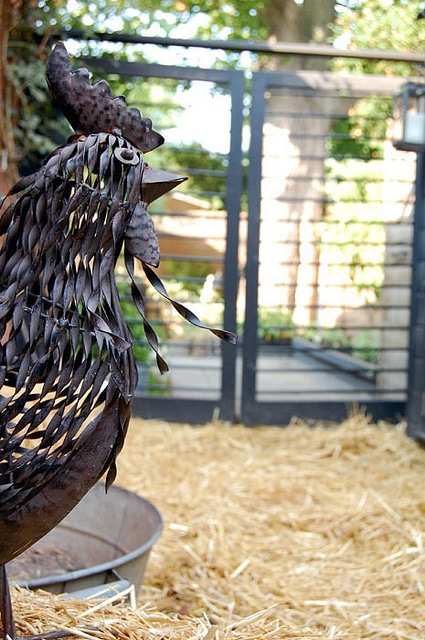 And the added bonus from doing these gates?  They work.  I now have a contained pooping palace.

And my very own perfectly happy, jailbirds. 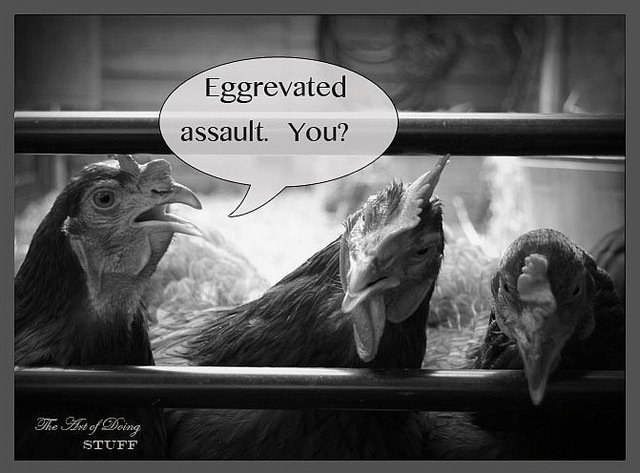