I was shocked several ago to find out that my favourite book of all time, Lonesome Dove had won the Pulitzer Prize.

It was a Western. And they talked about boobs. And they did a lot of spitting. It just wasn't the sort of book I thought won the Pulitzer Prize.

When I thought of books that won the Pulitzer Prize I thought of War and Peace. Crime and Punishment. That sort of thing. You know, books that required effort, a year and a half and a recently acquired British accent to read. At the very least the book would have to be written by a Russian.

Turns out I was wrong.

Turns out the award can ONLY go to American authors, which explains the curious omission of the entire Shopoholic series. Journalists are given more leeway. Any nationality can win a Pulitzer for journalism as long as they work for an American publication (web or print). 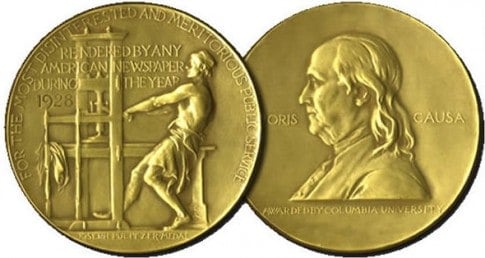 The Pulitzer Prize was established in 1917 by publisher Joseph Pulitzer. And any journalist or novelist can submit their work to be considered for a Pulitzer as long as it fits into one of the Pulitzer categories. And As long as they have the $50 entry fee. Which ironically, a lot of writers don't.

So as it turns out, the Pulitzer Prize isn't something that screams "REALLY HARD TO READ BOOK HERE! GET YOUR 1,000 PAGE SNOOZEFEST HERE!". It actually means, "Get your really good book here". Winners have included funny books, serious books, Westerns and snoozefests.

If you're looking for an award winning book to read, these are a few of the Pulitzer Prize winners I've read and how I rate them out of four  "♥"'s.

Empire Falls - Richard Russo  I swear to you I can't remember a thing about this book. That says a lot.

The Stone Diaries - Carol Shields  ditto for this one.

To see a list of the entire Pulitzer Prize winners in the fiction category just click here.