When I was a wee, little thing, wee(er) and little(er) than I am now, I was a member of my small town's summertime Library Reading Club.  Every week during my summer vacation my mother would take me to the library's children's section so I could pick out my next few books.

At least I assume she did. I don't really remember her taking me at all but I'm pretty sure I didn't ride my Big Wheel there, although I could have hitchhiked.

I do remember the book club, and the hushed tone of the library with the only sound being the flipping of paper pages and the sliding of books in and out of the shelves.  All the disturbing sounds, the clangs and bangs of file cabinets and such, absorbed by the low pile carpet.

I'd make my way downstairs, to the children's section to have my paper stamped, confirming that I had read my previous weeks books. Having officially established I was a reading fool, I wandered into the stacks, looking at book after book, their protective plastic covers crinkling along the spine as I opened them hoping to discover my next read.

I'm not sure what you could call the feeling I had wandering around in that library or the feeling I got knowing I was going to be able to go home and read the stories I'd chosen but it was probably a cross between utter joy, love, and batshit crazy.

I have always loved reading to the point of insanity.  I get anxious if I don't have at least 5 books waiting to read. I need to read before I go to bed no matter how tired I am.  I'll do everything short of propping my eyelids open with toothpicks Tom & Jerry style to get at least a few more pages in.

I read "literature", I read humour and I read crap.  I read it all, depending on my mood.  And the  5 Books I've Read plus 5 Books I'm Gonna Read posts pretty much reflect that. 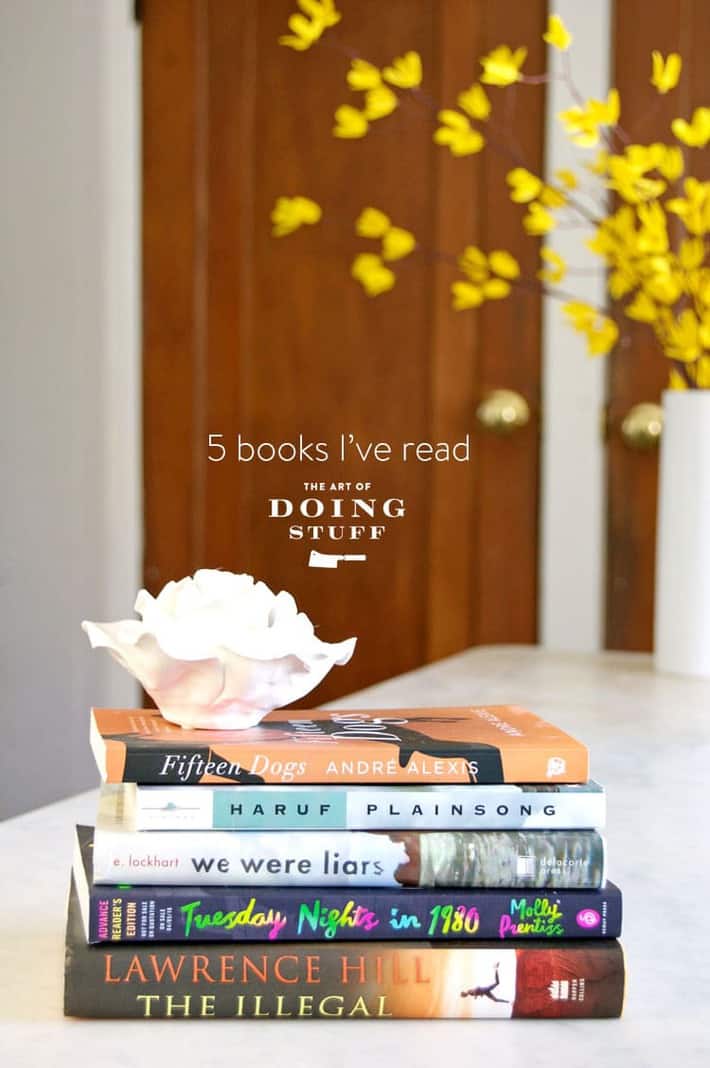 The Illegal - The Illegal is Lawrence Hill's most engaging book since The Book of Negroes (sometimes titled Someone Knows My Name).  Hill lives about 10 minutes from me.  That means nothing, I just thought I'd throw it in there in case it makes you think I'm a bit more special because of it.   The story revolves around a marathon runner from a small, corrupt African country.  This is how Amazon describes it:

All Keita has ever wanted to do is to run. Running means respect and wealth at home. His native Zantoroland, a fictionalized country whose tyrants are eerily familiar, turns out the fastest marathoners on earth. But after his journalist father is killed for his outspoken political views, Keita must flee to the wealthy nation of Freedom State―a country engaged in a crackdown on all undocumented people.

There, Keita becomes a part of the new underground. He learns what it means to live as an illegal: surfacing to earn cash prizes by running local races and assessing whether the people he meets will be kind or turn him in. As the authorities seek to arrest Keita, he strives to elude capture and ransom his sister, who has been kidnapped.

Set in an imagined country bearing a striking resemblance to our own, this tension-filled novel casts its eye on race, human potential, and what it means to belong.

I loved this book and couldn't wait to go to bed to read it.  That's the sign of a good book.

Tuesday Nights in 1980 - This novel by first time author Molly Prentiss  takes place in New York City's art scene of the 1980s.  It focuses mainly on 3 characters, Raul an artist who has escaped escalating violence in Argentina, small town Idaho Lucy and an art critic with the condition Synesthesia.  I quite liked it.  But I'm not sure I'll remember it. Does that make sense?

We Were Liars - THIS one I will remember.  I really loved We Were Liars by E. Lockhart. It's the story of The Sinclairs; filthy rich, old money democrats who summer at their private island off of Martha's Vineyard. The back of the book jacket says it best:

No one is needy.

No one is wrong.

We live, at least in the summertime, on a private island off the coast of Massachusetts.

Perhaps that is all you need to know.

Except that some of us are liars.

Plainsong - Plainsong by Kent Haruf was recommended to me by my neighbour Jane as she drove past in her car. I believe she had read my latest post on books and screamed out of the car "READ PLAINSONG BY KENT HARUFFFFFFffffffff. "  And then she was gone.  Plainsong is a quiet, beautiful little book. "Tom Guthrie is a high school teacher whose wife can't--or won't--get out of bed; the McPherons are two bachelor brothers who know little about the world beyond their farm gate; Victoria Roubideaux is a pregnant 17-year-old with no place to turn. Their lives parallel each other in much the same way any small-town lives would--until Maggie Jones, another teacher, makes them intersect." (from Amazon)  Kent Haruf has a follow up novel to Plainsong, called Eventide which will be getting added to the dwindling stack of books beside my bed soon.

Fifteen Dogs - I thought this book was stupid. There I said it.  I know it probably means I just didn't get it, or didn't read into it far enough, or understand the metaphors or allegory or whatever else, but even if I did, I still wouldn't have liked it.  The book's a great idea. It's a novel that humanizes 15 dogs and takes you on their journey through life as they break out of a dog shelter.  Or was it a vet's office?  Anyhow, for me it was sad and depressing and generally awful.  It made me feel hateful and pessimistic towards both dogs and humans.  Mind you I only managed to get halfway through it before flinging it across the room and curling up with my cat. 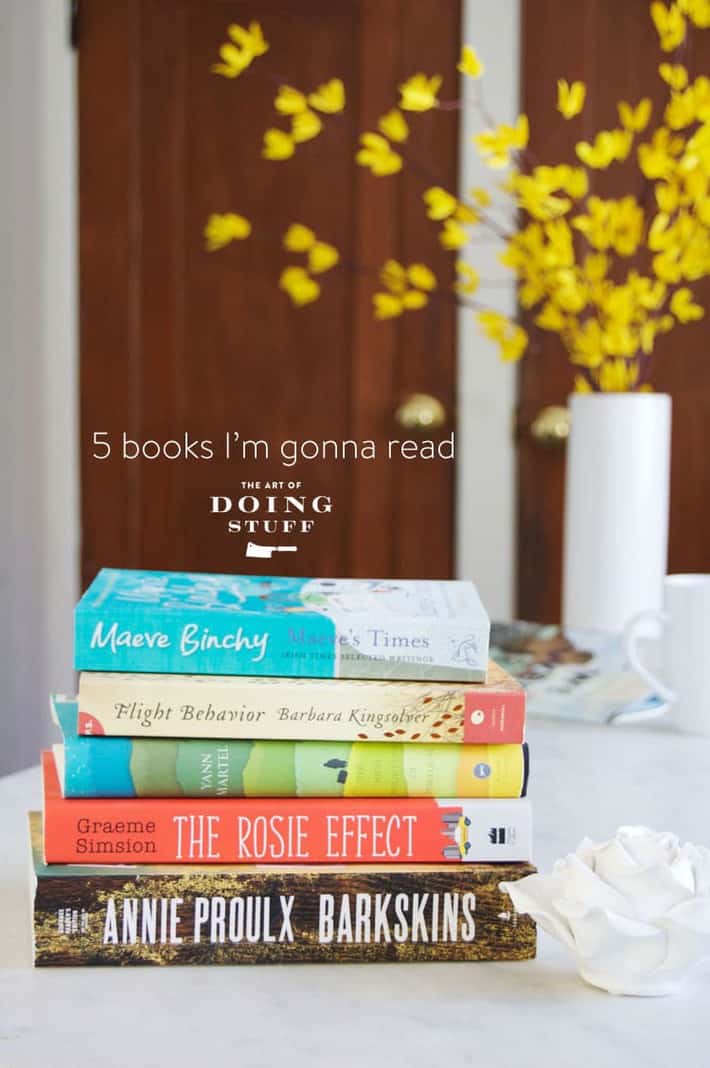 Maeve's Times - Maeve Binchy is one of the great storytellers of our time.  Her characters and settings are funny, warm, ordinary, and extraordinary.  If I could use only one word to describe Maeve Binchy stories it would be "comfortable".  Maeve Binchy died in 2012.  This is a collection of her short stories as they appeared in The Irish Times from the 1960's to the time of her death.  Before and during her time as a novelist,  Binchy was a reporter, correspondent and columnist for the paper.

Set in the present day in the rural community of Feathertown, Tennessee, Flight Behavior tells the story of Dellarobia Turnbow, a petite, razor-sharp 29-year-old who nurtured worldly ambitions before becoming pregnant and marrying at seventeen. Now, after more than a decade of tending to small children on a failing farm, oppressed by poverty, isolation and her husband's antagonistic family, she has mitigated her boredom by surrendering to an obsessive flirtation with a handsome younger man.

In the opening scene, Dellarobia is headed for a secluded mountain cabin to meet this man and initiate what she expects will be a self-destructive affair. But the tryst never happens. Instead, she walks into something on the mountainside she cannot explain or understand: a forested valley filled with silent red fire that appears to her a miracle.

After years lived entirely in the confines of one small house, Dellarobia finds her path suddenly opening out, chapter by chapter, into blunt and confrontational engagement with her family, her church, her town, her continent, and finally the world at large.

I'm guessing that field of fire is butterflies, but I guess I'll have to read it to find out.  Which I will. Probably some time this summer.

The High Mountains of Portugal - I bought this latest book by Life of Pi author Yann Martel before I knew anything about it.  I loved Life of Pi and so did over 6,000 Amazon reviewers.  60% of them gave it the highest rating, 5 stars.   Now that I own The High Mountains of Portugal, I looked up a few reviews on Amazon where the word "slog" is used a disturbing amount of times to describe what it's like to get through.

The Rosie Effect -   The Rosie Effect is the follow up novel to the wildly, out-of-the-blue popular novel The Rosie Project; a hilarious and charming novel about a man with Aspergers figuring out how to work love into his regimented life.  I'm really looking forward to reading the light and entertaining Rosie Effect after reading the book I'm reading right now ...

Barkskins - I've included Barkskins in my "gonna read" books because even though I've started it, I haven't finished it.  I'm on page 41 of the over 700 page novel from Pulitzer Prize winning author Annie Proulx who wrote The Shipping News and Brokeback Mountain.   This is not what you would call an easy read but it's what you'd call a great read.  It's already reminding me of Lonesome Dove.  Not the story, but the way, even only 40 pages in, I feel for these characters. I know them. I know where they live and how they work.  I'm a part of their world, I'm not just reading about it.  I'm immersed.

Barkskins tells the stories of 2 very different men and generations of their descendants from the day they land in "New France" (Canada) in the late 1600's. Both are taken on as wood cutters (Barkskins) to clear the wild forests of a landowner.

So that's 5 more books down and 5 more to go in my lifelong journey of reading. Gold stars for me. And since you're still here reading this, I imagine gold stars for you too.