I’m going to take a minute to warn you that this page might load slowly because there are a lot (as in too many) photographs of the garden and all the varieties of dahlias. So go, get a coffee, a donut and I’ll meet you back here.

3 years ago I decided I was going to give having an English cottage garden a real try. You know? Like I’d actually put in some effort and not just expect it to appear. I love the look of neat, tidy gardens where everything is trimmed and perfect looking. But I can’t live with it myself.

I like a little bit of wild in my garden but at the same time I don’t want it to look like it’s just overgrown and out of control. You’d be surprised at how hard it is to get the perfect balance between rigid and I stopped to taking my meds.

2 years ago I started clearing things out from my front yard that I either didn’t like or didn’t think suited a typical English garden. I dug up a couple of perennial hibiscus, some day lilies and thinned out the phlox which always got powdery mildew 3 days into blooming then croaked completely the next day.

Phlox does NOT like to be crowded but if you insist on having it, thinning it so there’s plenty of space between each stem will really, really help reduce powdery mildew.

I should probably point out that I did nothing to clean up the garden for these photos. I didn’t rake, I didn’t sweep, I didn’t deadhead. Nothing.

What is an English Cottage Garden

Let’s recap what an English Cottage Garden is. It’s anything you want it to be. There are no rules, and that’s what makes it so hard to figure out.

With a classic garden you know you want things like structure and symmetry.

With a cottage garden it’s a free for all. BUT there are some guidelines.

You want lots of flowers, vegetables and things should have a proper balance to them but not necessarily symmetry.

You can read a lot more about what makes an English Cottage garden in this post that I wrote in detail about it.

I find it MUCH easier to design this kind of wild garden if I have at least a little bit of symmetry. Because of that, enter black kale.

This is Black Magic kale and it is exactly as big as it looks. It’s also the plant in my yard that’s the most gawked at. Some people are brave enough to ask what it is.

I’m growing it here for decorative purposes until November. Once November hits, I’ll be using it for cooking. It should stay good until January. Actually I don’t cook kale. The only way I’ll eat it is raw for this kale salad that I eat all winter long.

A lot of what grew in the garden just popped up from last year. I didn’t plant any celosia for example, yet I have all kinds of it and I’ve pulled out scads of it.

I’ll be saving seeds from this one but I’m not sure why because I won’t have to plant any of them next year – they’ll just grow.

And then there are the dahlias. I have so many dahlias and half of them didn’t even grow. I have at least 5 varieties that have grown but still haven’t flowered yet.

I took part in a couple of ZOOM meetings with my local dahlia society and they described it as a challenging year for dahlias. Dahlia people are quite polite.

I describe it as a wing nut, disaster of a shitshow. Snow on the first long weekend of the summer followed IMMEDIATELY by drought & blinding heat for 3 straight months.

I’m hoping the dahlias that haven’t flowered will put forth a concerted effort to explode with blooms in the next 4 or 5 hours before frost comes. If not, the tubers should still be good when I dig them up so I can try again next year.

I have some favourites, but this isn’t one of them. I like it and all, but I wouldn’t be crushed if the tuber didn’t make it.

Next year I’ll do a better job of staking them.

The dahlias seem to take over the garden, but only for the fall. In the earlier parts of summer there are roses that bloom, hydrangeas, lavender, cosmos, snapdragons and a bunch of other stuff that I can’t really remember right now because I’m blinded by the dahlias.

Everything in this front bed self seeded. So if you’re looking for things that will self seed keep these things in mind.

Flowers that self seed

I warned you about the mass of photos, right?

Good. Because I’m sure about now you’re wondering when this will ever end.

In case you ARE wondering – we’re only halfway through the photos right now.

All my dahlias were originally planted around 15″ apart. That’s about right if you want a dahlia border with the dahlias mixing in together and creating almost a wall while still getting enough air circulation around them.

They all need to be staked in some way. Dahlias are big but very fragile and the stems snap very easily. Hollow stems and big heavy flower heads is a real design flaw.

This peachy, sorbetish stunner is Yvonne, and the form is water lily.

This one section along my fence is the fullest. It’s where the least amount of dahlias crapped out on me. That’s a horticultural society term, “crapped out.”

I planted snapdragons once. I can’t even remember when it was but I now get a a massive amount of snapdragons in my wall every year. They mutate and cross pollinate and the colours are different every year.

I interrupt this encyclopedia of flowers for this red cabbage. I mentioned that any proper English Cottage Garden should have vegetables.

Two flank the gate to get into my yard. There’s also a couple of random potato plants, herbs, and 4 tomato plants growing in the garden.

Welcome back. If you could all take your seats after that brief intermission the dahlia show is about to resume.

Closer to the beginning of the summer this obsidian dahlia was more black than red. In fact, just bringing it in the house where the lighting is so much weaker, it looks black.

Colleen Mooney was the first dahlia to bloom for me this year and that makes perfect sense given the fact that this American Dahlia Society award winner was developed just a few miles from my house.

I couldn’t have found a variety that was more local if I tried.

Alfred C, a HUGE dinner plate, semi-cactus dahlia. Right after the kale, this is the most commented on thing in my garden.

Pam Howden only just bloomed. The plant is still tiny so it must be taking every last bit of its energy to spurt that out. It was the victim of not getting enough water. With any luck there’s a good tuber underneath the soil that I can try again with next year.

THE dahlia of the moment. Cafe Au Lait is almost everyone’s favourite and has been for the past few years. It truly is a very light blush with a centre the colour of cafe au lait.

This is good example of how things grow organically with no help from a human and look fantastic. All of this self seeded. The plethora of snapdragons in different colours, the alyssum, cockscomb in the centre and the tall, beautiful Hot Biscuits Amaranth in behind the fence.

Coming in as crowd favourite number 3 is amaranth. There are so many varieties of Amaranth and they grow so big so quickly that they’re gaining on dahlias in my heart. This is Hot Biscuits, which I bought from Floret a couple of years ago.

At my community garden I have a few other varieties growing as well. They get very tall and bushy so they fill in a lot of space in a fall garden. Some grow straight up like Hot Biscuits, some droop and trail.

And that is it. My English Cottage garden.

I started this garden 3 years ago.

Around the same time we all started reading this post. 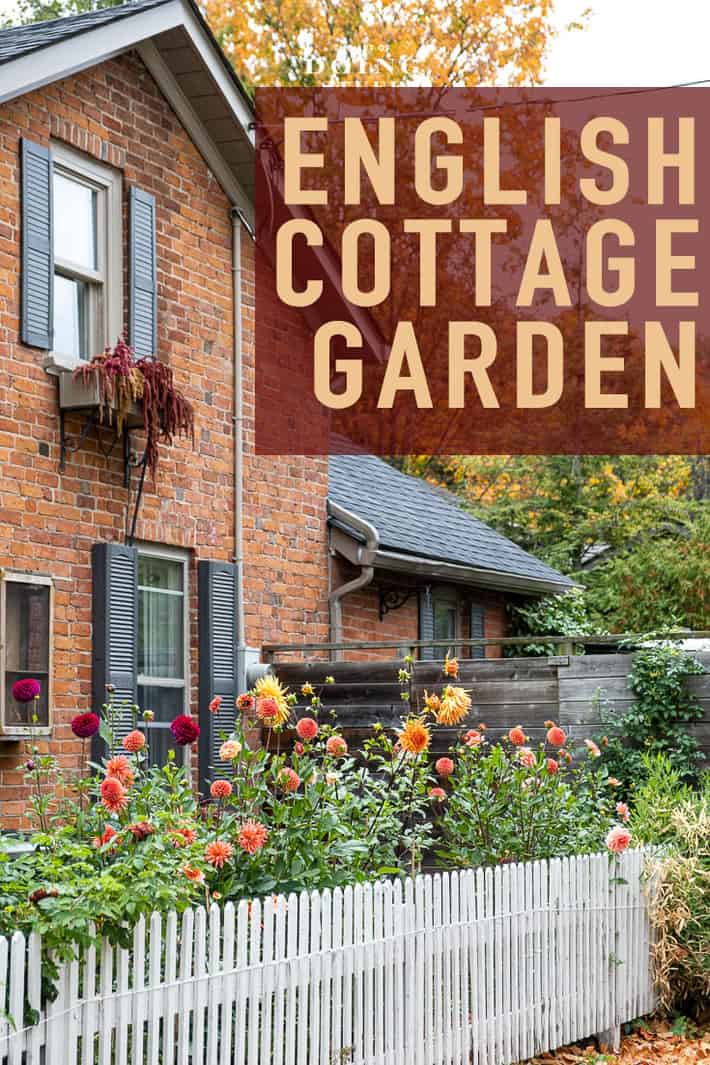