This is a really beautiful and effective way to decorate any bookcase for Christmas.  Bookcase presents to fill every nook with Christmas cheer. (Yes, I do happen to find black to be quite cheery. K, maybe not cheery, but very, very chic.) 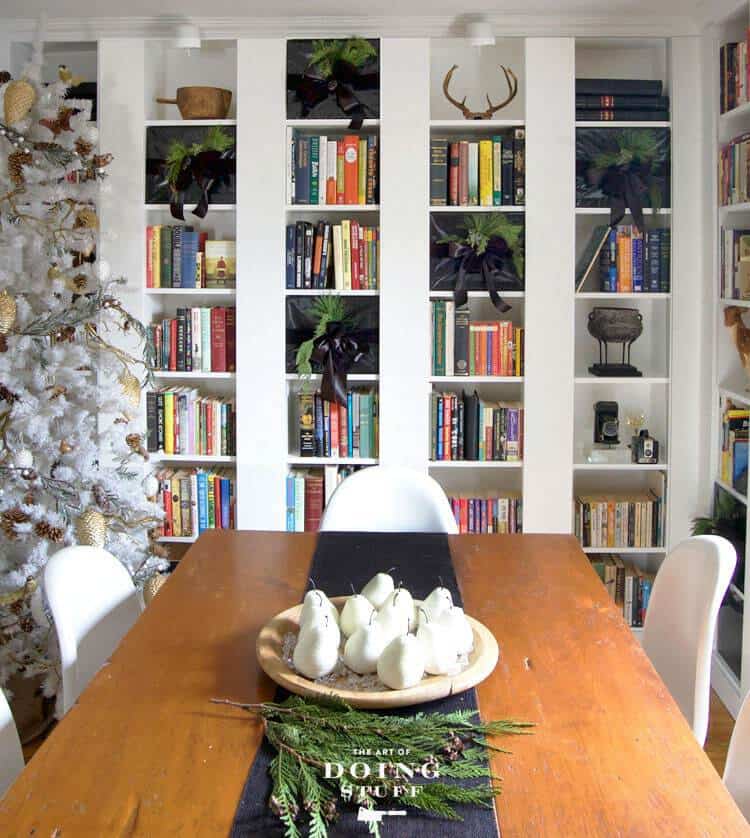 O.K., you've seen the photo above, right? I am assuming that you zoomed in to see what types of books I read. Understandable. I'd do the same thing with a photo of your house as well. BUT let's focus on the nook fillers. The wrapped black presents with bows.

This idea came about when I saw it at a friend's house and copied it. I made it much better than he did because a) I'm telling the story and b) his kids were the ones who picked out the wrapping paper for his bookcase presents.  Kids have such bad taste.

I built these built in bookcases just before Christmas. You can read a bit about how I built them here and see their full reveal including the secret storage compartments they have here.   That meant I had to quickly fill them up with something that made them look instantly "Christmassy" but no matter what I did it didn't look chic or elegant it looked like Santa went on a bender and barfed all over my bookcases.

So the bookcase presents were born. (copied, stolen, whatever) 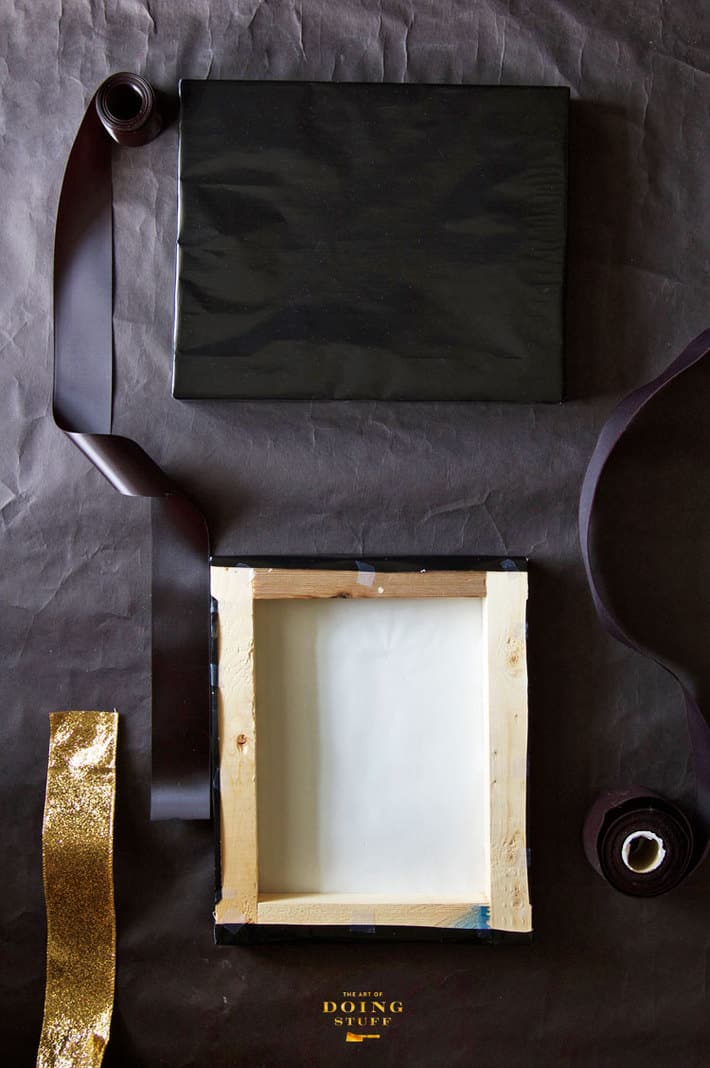 These presents aren't boxes, they're actually frames made out of 2x2s wrapped in paper.  By screwing the 2x2s together yourself, you get "presents" that fit the exact dimensions of your bookcase nook.

If you're looking for black wrapping paper, I got mine at Party City but you can get it on Amazon as well. I found this Black Kraft Paper on Amazon which would be perfect because it's matte PLUS they have it in every colour imaginable - red, green, Tiffany blue, orange ...

Matte paper is better than shiny because shiny shows all the wrinkles, marks etc. 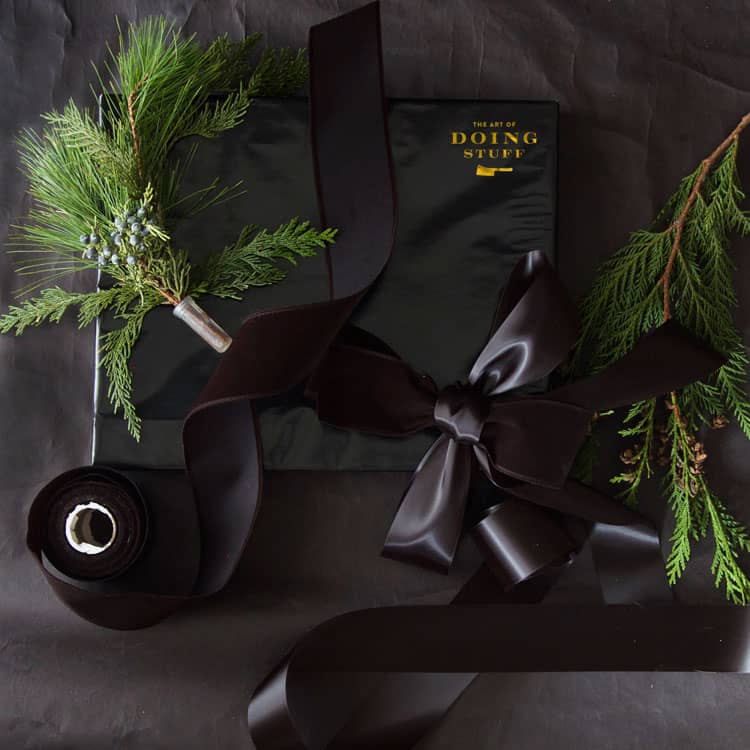 By forming the presents with just a few 2x2s you don't even need to take anything out of your bookcase. You just stick the false present in front of the books. When it's time to get rid of them you slide them out and your bookcases are exactly like they were before Christmas.  It's a Christmas miracle, cue the squirming baby Jesus. 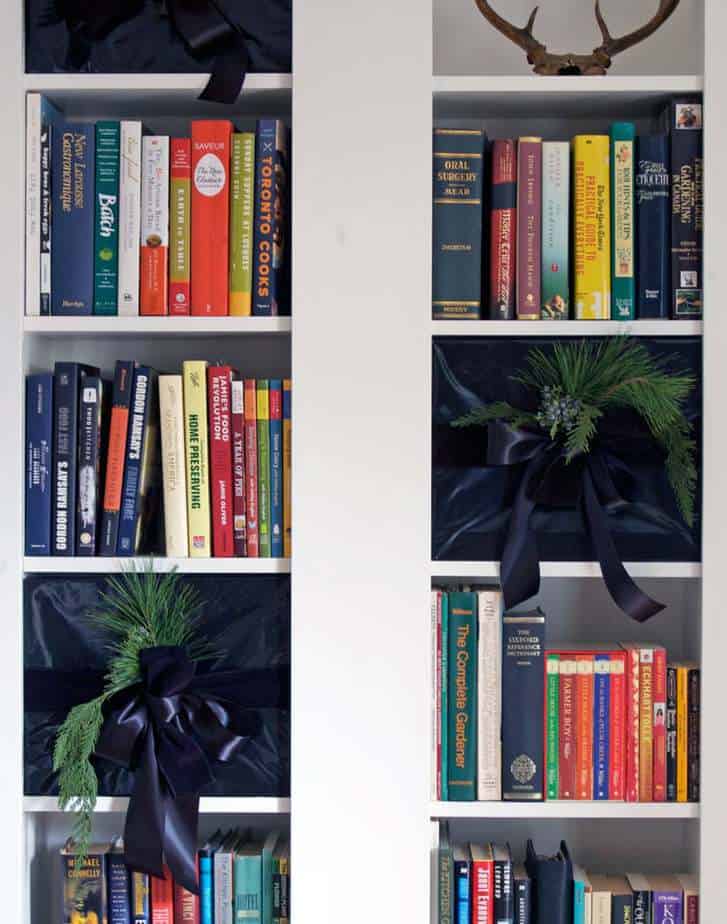 Keeping your books where they are and just putting the presents in front of your books only works if you have 1 ½" of space behind your books to shove them back a bit.

My presents fit really tightly into their spots but you could put a little leg on the back of them so they don't tip over.

I used black paper, black velvet and black silk ribbon.  To add contrast so everything stands out you need to add some greenery.  Two sprigs pine, one sprig cedar, one sprig juniper.  I put them all in little floral vials so they won't dry out by the end of the month.

Update: HAHAHAHAH.  Do you know how little those floral vials are?  You need to fill them like once a day.  I got sick of filling them after day 2. The greenery will be be crispy in about 4 days.  But it's the thought that counts and I know you'll be far more conscientious than I am. 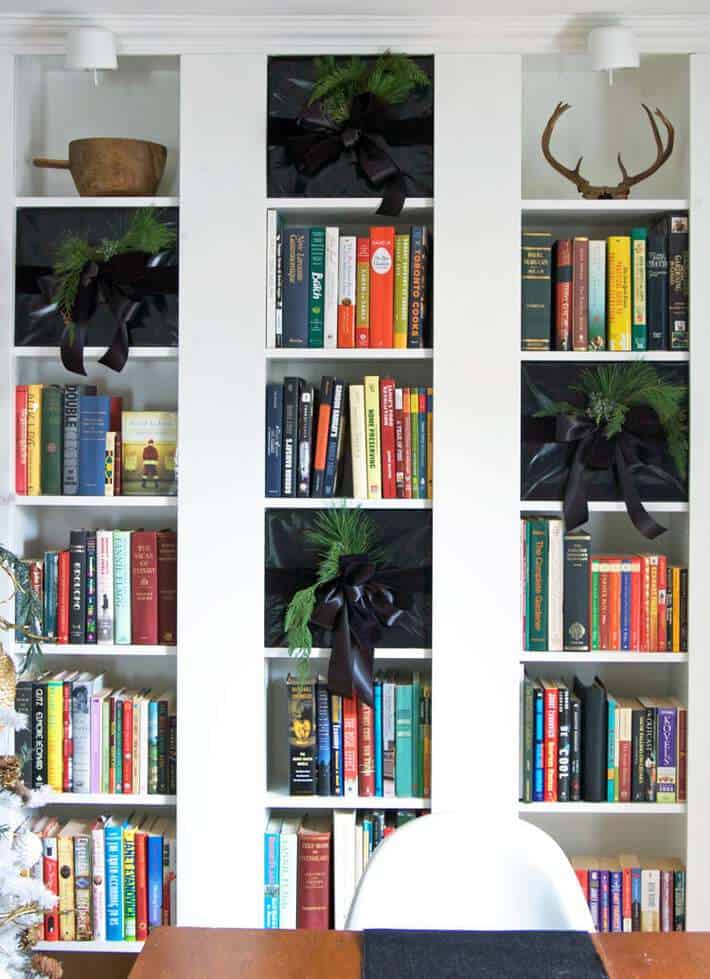 I searched around big, bad Amazon for a while and found the best selection of fake greenery picks for Christmas. 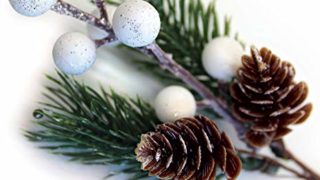 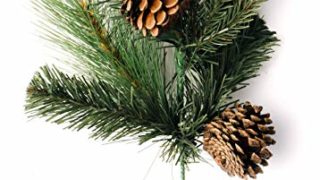 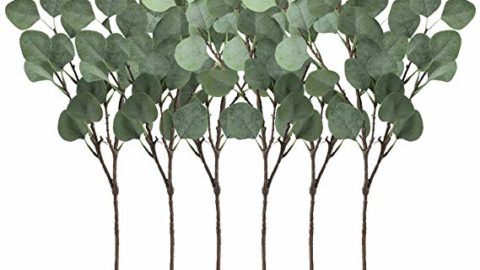 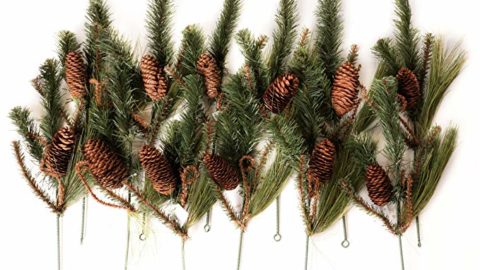 Store these carefully and they'll last for years.

Use whatever kind of paper you want. Vintage wrapping paper would be GREAT.

If you're going to screw the frames together remember to pre-drill the wood so it doesn't split.

Matte paper is better than shiny because shiny shows all the wrinkles, marks etc.

I might go nuts and change the paper on these to red this year, but honestly, I really do like a black Christmas.