Raise your hand if you love bread & butter pickles because you love anything that’s old timey, delicious and comes in a mason jar.  These crispy, sweet and tart pickles are delicious right out of the jar or as a side to a sandwich. 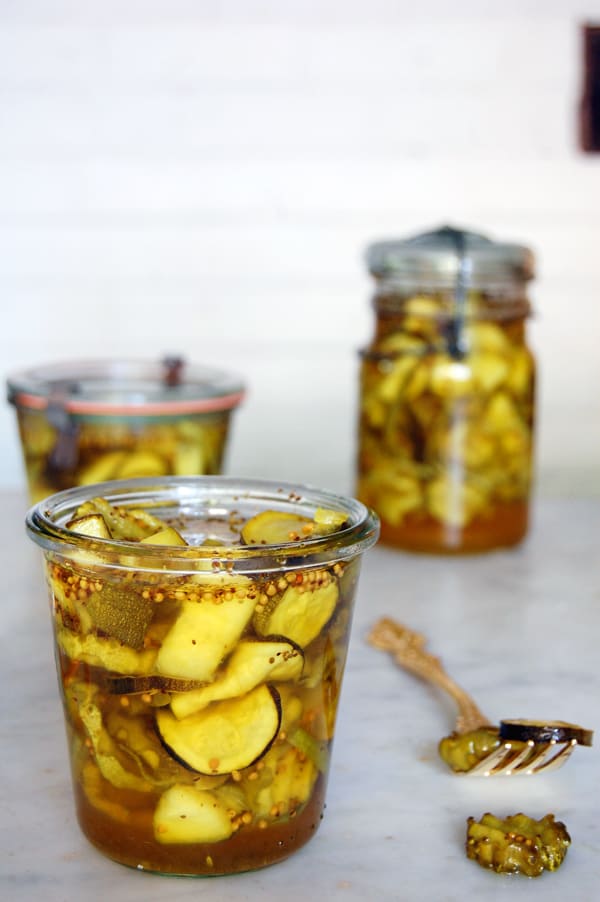 I’ve been eating bread and butter pickles for 2 weeks straight now.  I eat them faster than I can make them. In the middle of my face there is a puckery canker sore the size of a ping pong ball which kind of resembles a mouth?  And I don’t care that I have a pinched up canker sore mouth. They’re that good.

Anyhow, the slight let down of the fermented dills meant I was really counting on my bread and butter pickles. 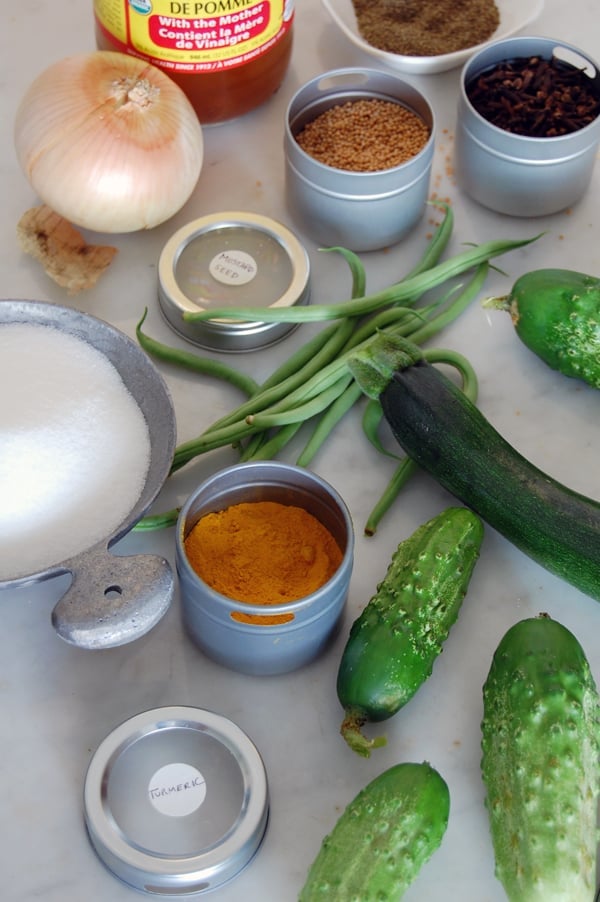 I’ve tried the churched up, fancified versions of bread and butter pickles, but always come back to the classics.

What exactly is a bread & butter pickle?

Traditionally they’re thinly sliced pickles made from cucumbers that are equal parts sweet and tart. They’re a depression era invention which is probably why I associate them with grandmothers in threadbare ruffled aprons and dusty porches. In a good way.

There’s neither ingredient in them so …

Why are they called Bread & Butter pickles?

There are two stories about how they came to get their name. As one story goes, people ate these pickles between bread and butter because of both food and money shortages during the depression.

There’s a more fact based answer to this question though.  Bread and butter pickles were invented by Omar and Cora Fanning in 1920 by a husband and wife farmer team in Illinois. In 1923 they filed a trademark on the name “Fanning’s Bread and Butter pickles”.

Not wanting to waste anything they took the cucumbers they grew that were too small to sell and made them into sweet and tart pickles.  Their family raved about them, went crazy for them, ran through blazing barn fires while juggling bottles of flaming moonshine for them (I took a bit of artistic license with that scenario.)

When they realized how loved the pickles were they used them to barter with their grocer in exchange for staples – like bread and butter.

These are good old fashioned, classic bread and butter pickles right down to the fact that I use whatever I have on hand to pickle.  Pickling cucumbers, like Kirby cucumbers obviously, but also green beans and zucchini if I have extra from my garden. So don’t  just limit yourself to cucumber slices, try anything you have around.

I like to use my wavy knife for making these pickles.  You can buy the exact same one on Amazon –  they’re $8 and work great. I also use it to make crinkle cut fries when I can be bothered. 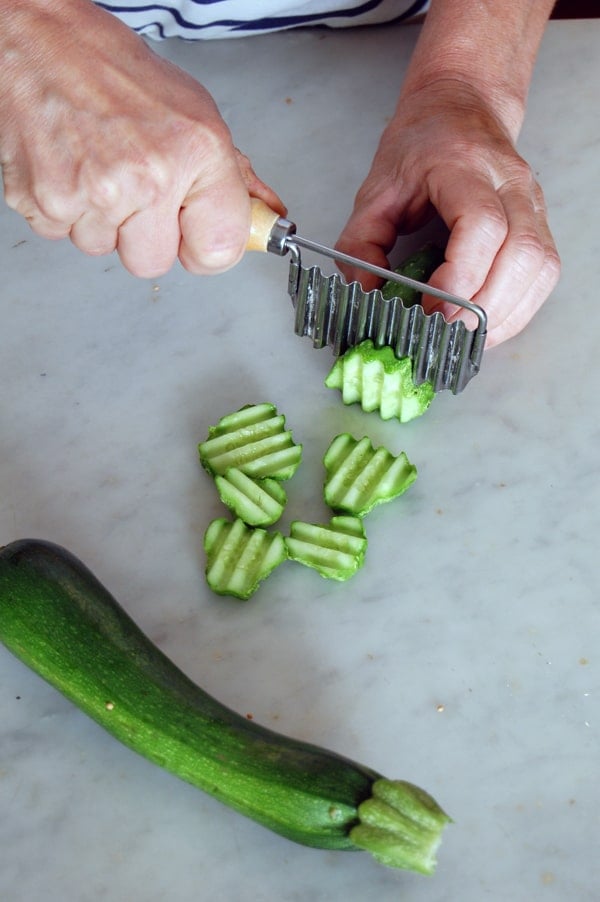 I deviate from a completely traditional B&B pickle by cutting the slices a tiny bit thicker than they would normally be, plus I sometimes crinkle cut them. For 100% traditional, slice them very thin and straight. 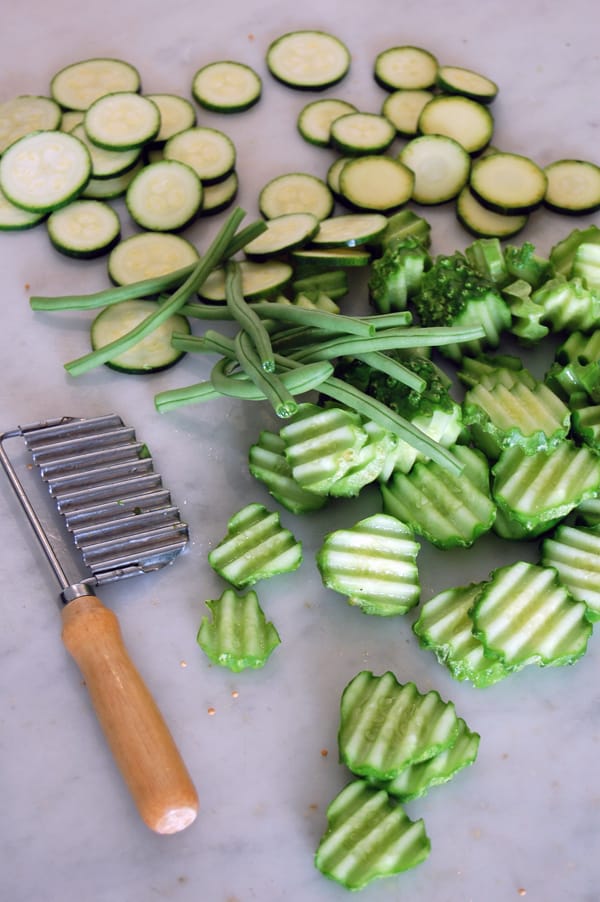 If you only have giant, mammoth cucumbers or zucchini don’t worry about it. You can still use them.  If the zucchini has seeds in it, just remove them because they can get bitter when the zucchini is big.

Then just cut the offensively large zucchini/cucumber in half, then cut the halves into quarters lengthwise. 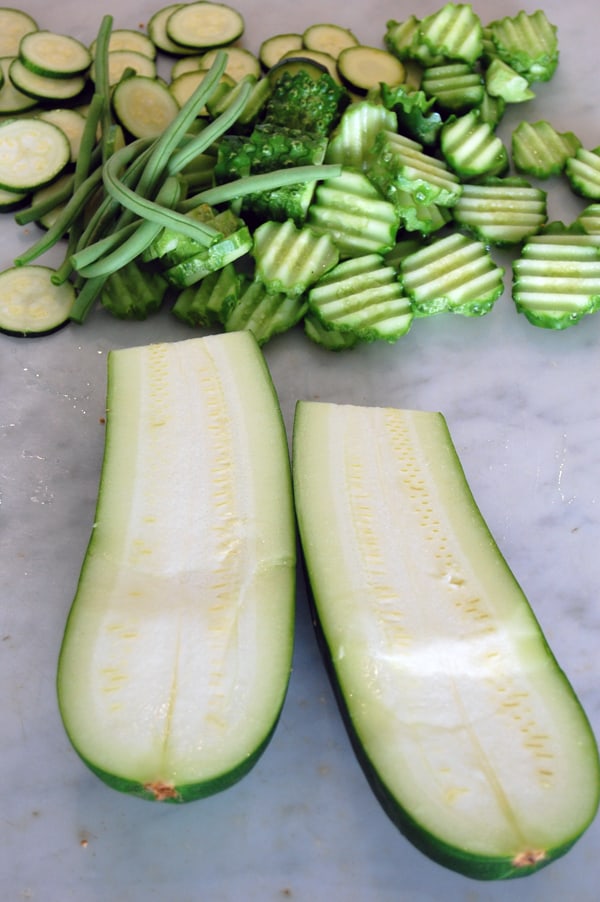 They’ll look like little triangles, when  you cut across them, as you can see below. 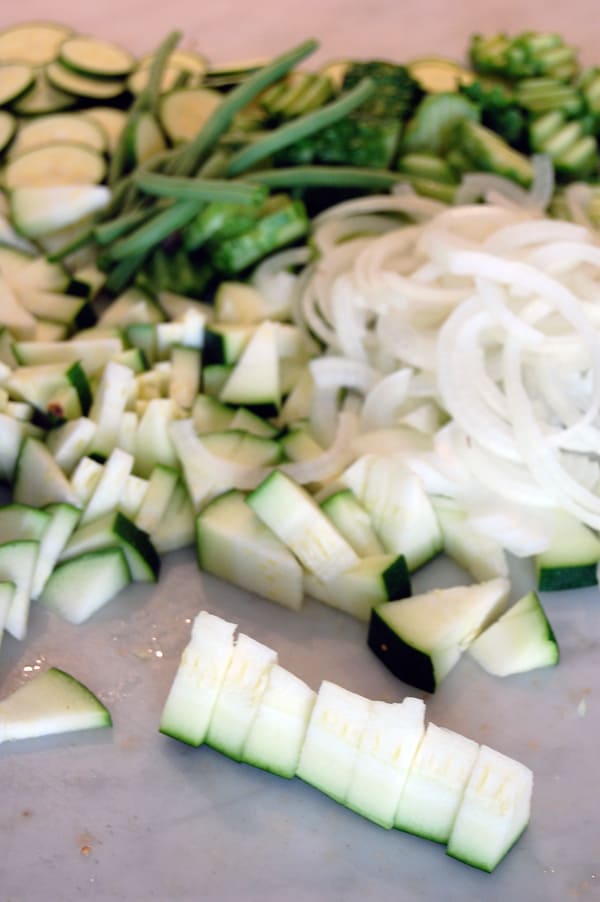 You can use regular table salt to draw the moisture out of your vegetables but kosher/pickling salt is better. It  doesn’t dissolve as quickly or absorb into the vegetables as easily. 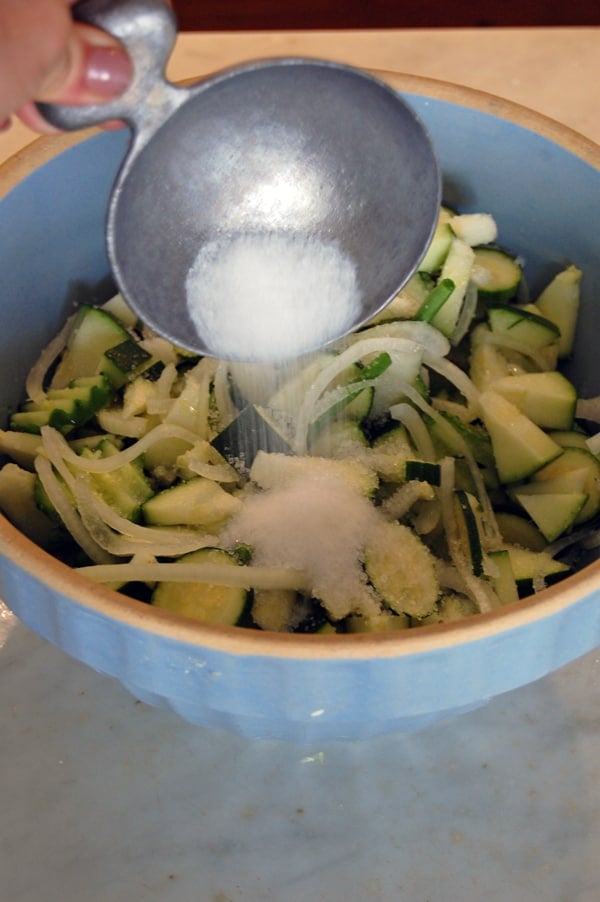 Then you throw in a tray of ice cubes to help everything stay cold and crisp. 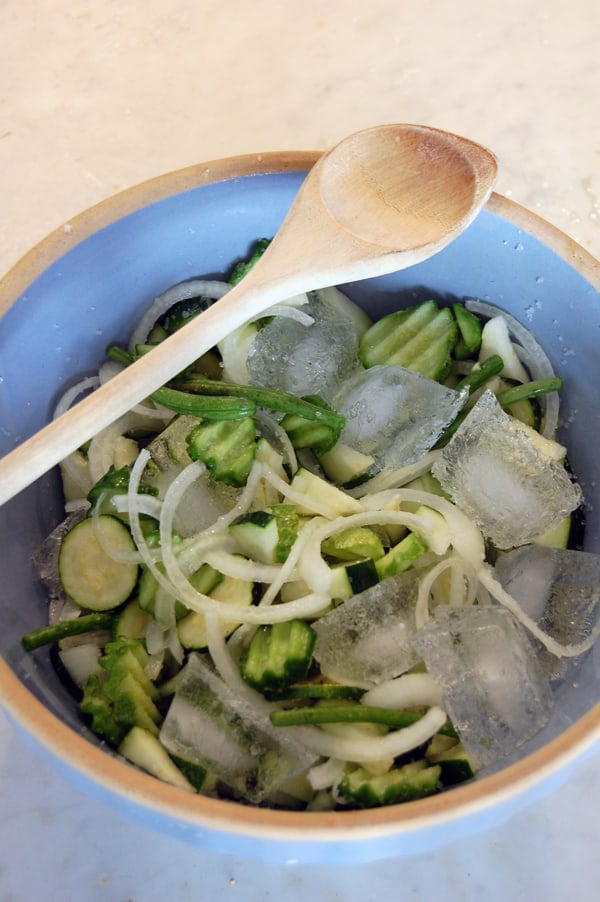 Once the pickles have soaked in salt for 3 hours rinse them like crazy to get rid of the salt.  Taste one of the cucumbers to make sure the majority of the salt is out. Add the rinsed cucumbers to your boiling brine (we’ll get to the brine in a minute but it’s some spices, vinegar and sugar) and bring everything back to the boil.

Shove as many pickles into the jar as you can.  Just smash them in there. I use canning jars but you can put them in anything because these aren’t processed and are going to live in the refrigerator once you’ve made them. 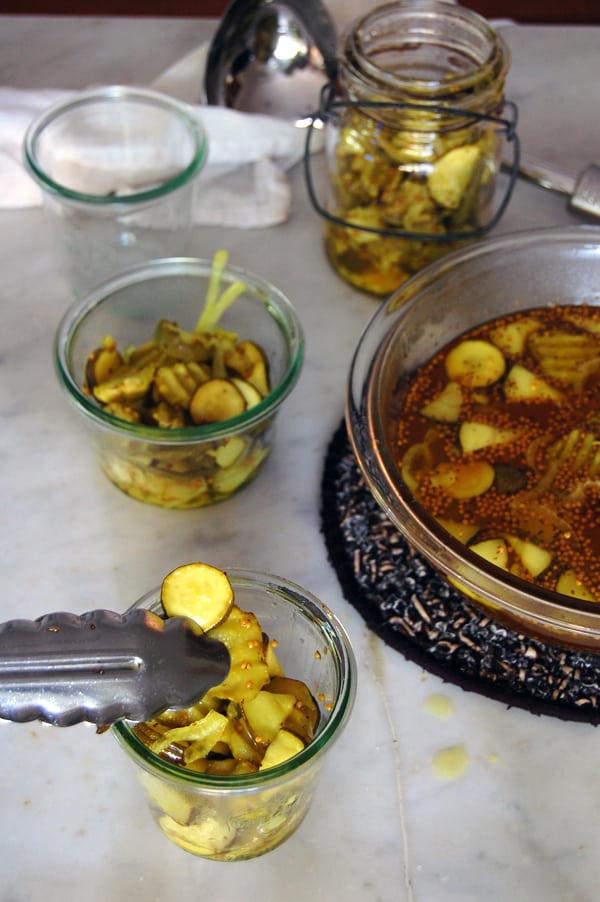 Finally pour the brine overtop.  You may have some left over.  I just stick any leftover brine in the refrigerator if I think I’m going to make some more in the near future. Which I always do.  They’re that good. 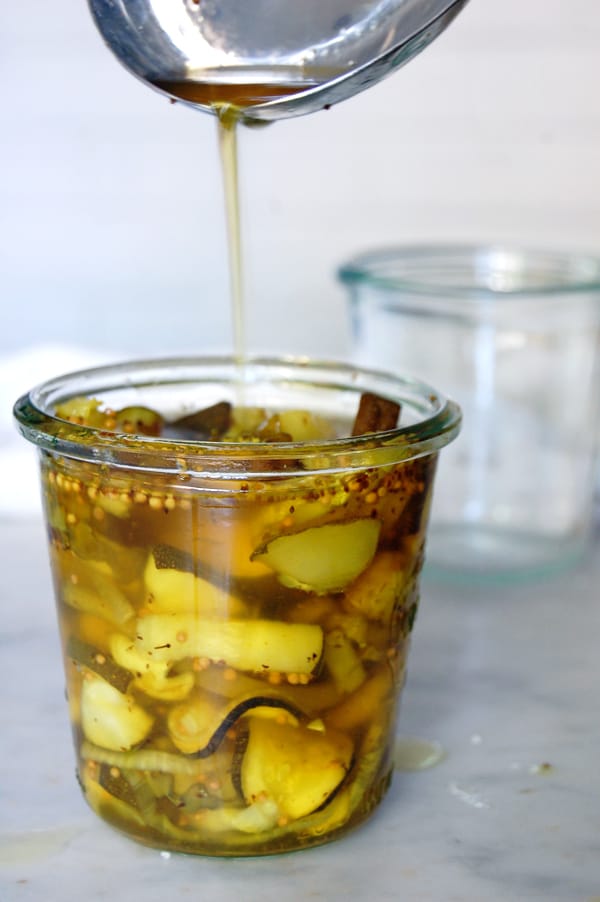 Once your pickles are packed, just store them in the fridge.  If that seems like a waste of time, just leave them on the counter. They’ll be gone before you can say who ate all the pickles dammit, you SUCK.

Want to make a HOT version of these?  They’re like Wickles, if you’re familiar with those.  HOT and sweet pickles. SOOooOOOoooo good.  Here’s the one easy trick that will turn these classic bread & butters into hot & sweet pickles! But I’m currently in the process of coming up with a completely new stand alone recipe for hot and sweet pickles. 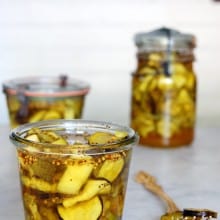 This recipe can easily be made into "Hot and Sweet" pickles, by adding  fresh or dried cayenne peppers to the jar.  Slice the peppers in half lengthwise (three or four peppers if you like it really hot) and stick them in the jar.  You can also add cayenne pepper or pepper flakes.  Or all three!  For the full flavour, let the jar rest in the fridge for a month giving it a shake every so often.

My family members all love pickles,  but they also all agree that they never eat them.  Which I don’t understand, but who among us has any real understanding of any of our family members? Other than our pets?

So if you’re confused about how to eat these or what to eat them with I have a few ideas for you, the first being how I eat them all the time.

That’s it. That is all I do.  Usually when I’m getting dinner ready or just feel like chewing on something.

Maybe even run through a burning barn for. 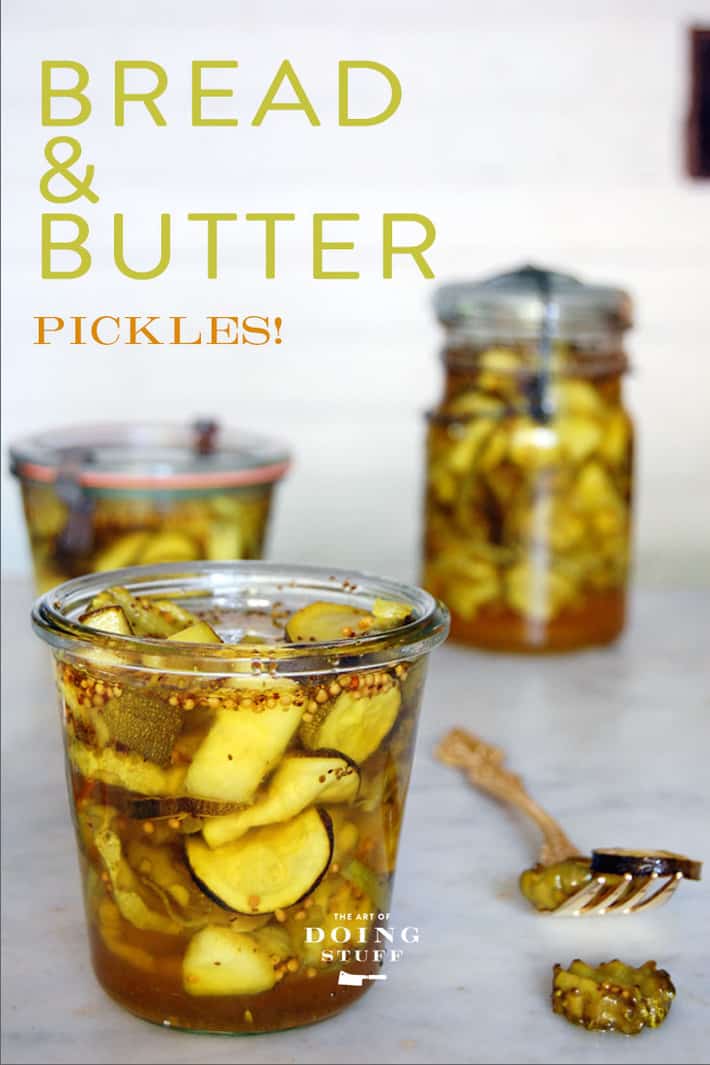