Cauliflower is a big boring bland vegetable in my books. BUT roast that sucker, add in toasted curry & coconut milk and you have a flavourful wintery soup. It's not boring. It's badass.

I say that as the granddaughter of a Danish sailer who to the best of my knowledge never had scurvy and therefore was never confused with cauliflower soup.

I made this soup last week with the last of the cauliflower from my garden. It's a sad time when the last of the vegetables are harvested and the garden goes to bed for the winter. Cleaning up the garden for winter is like having your therapist slam the door on you and saying their next available appointment is in 6 months. You can read about how gardening is therapy here.

I made it intending to freeze it for winter but ultimately leaned more towards eating it all then licking the pot.

I did reserve a bowl for Betty because I'm very, very nice and nothing scores points with Betty like food. Any food. Truthfully I could have won the exact same number of points by bringing her half a package of sightly dried out hotdogs.

I'm not a vegan or vegetarian by any stretch but for those of you who are, this recipe is entirely plant based and comes together in about 30 minutes. 40 if you're being leisurely.

Like I said, on its own, cauliflower is an insipid little vegetable with the personality of a plastic spoon.

It's the tofu of the vegetable world - horrifying on its own but if you give it a dance partner it'll be tap dancing from your tongue to your tummy.

In this case your oven is an ideal dance partner for cauliflower.

How to Roast Cauliflower

That caramelization is what gives cauliflower personality and better flavour. You don't need to blacken the it but the more golden colour, the more flavour you'll get.

It can be bland but you'll get a whole lot of flavour in cauliflower soup through the liquid base you use and the spices.

Coconut milk (which is often solid at the top of the can with liquid underneath so don't forget to stir it up) gives this soup a creaminess without using milk, cream, cornstarch or anything like that.

Spices are the other thing that obviously give flavour, but this is especially true for cauliflower soup. Because cauliflower is so bland the spices are what you're really going to notice in the soup so don't go overboard. This vegetable doesn't have the strength to fight back against bossy spices.

For this soup I'm using 3 ground spices that go perfectly with both coconut milk and cauliflower:

Those are the two main reasons this recipe works. Coconut milk and spices. Not really all that revolutionary is it?

Once your cauliflower is roasted you really just add it to a pot with everything else (spices, water, coconut milk, onion ... let it simmer and soften.

Once the cauliflower has softened you blend until silky smooth and start serving. You can use an immersion blender or a regular old blender. I swear by my Vitamix (which would make a great Christmas present for anyone who loves to cook by the way)

* This is obvious, but in case you need encouragement you can add however much curry you like. If you like a mild curry cut the amount in half to 1 Tbsp. Do it to your taste. It's O.K. I won't judge.

** Ditto for sugar. I actually usually double the amount of sugar because I like quite a bit of sweetness in this soup. Not candy-like, just a hint of sweet.

As with all good soups you need to commit to delicious garnishes. So drop a few of the roasted cauliflower slices, some cilantro and Greek Yogurt on top to really take this from grade 5 dance recital to Beyoncé at the Superbowl.

What to serve this with?

Betty would say a hot dog.

I say homemade crusty bread (or a reasonable facsimile because not everyone is a breadhead) and a salad.

Or eat the soup as a starter and have Italian sausage, kale salad and winter squash for the entree.

Or eat it like I did. With the pot and a spoon. 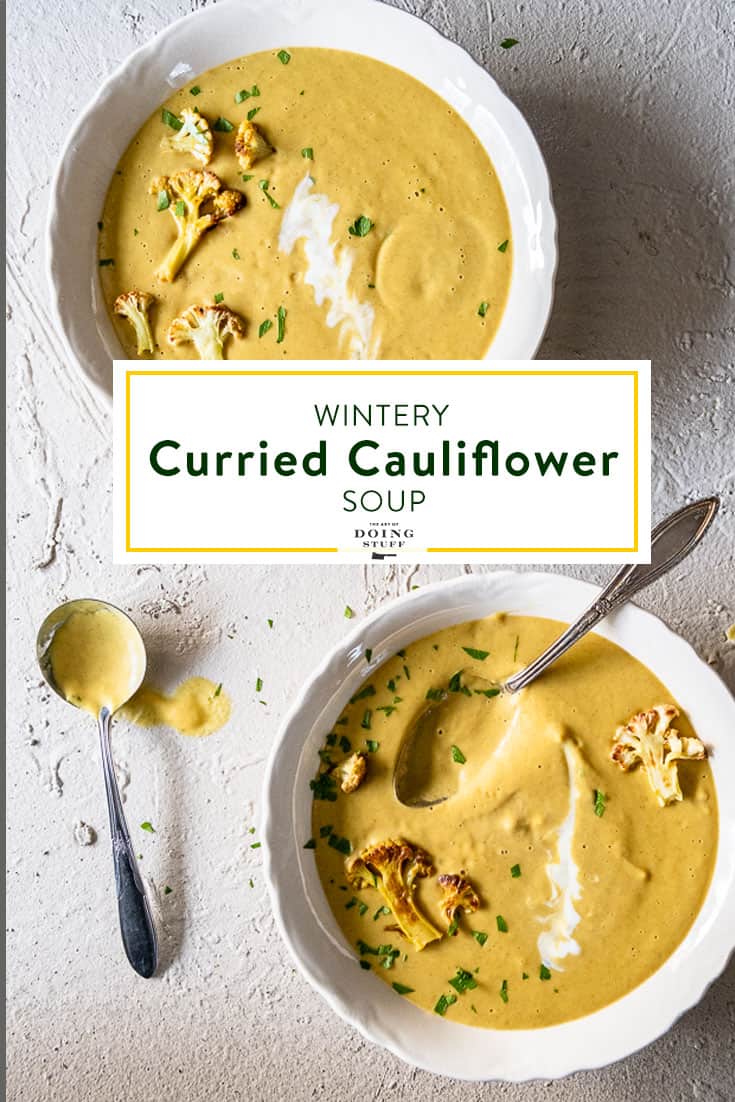