This is the best of best. A Halloween decoration that's one part Halloween and one part April Fool's joke. Both days revolve around scaring the shit out of each other - one of them was just smart enough to lessen the blow with an offering of candy. 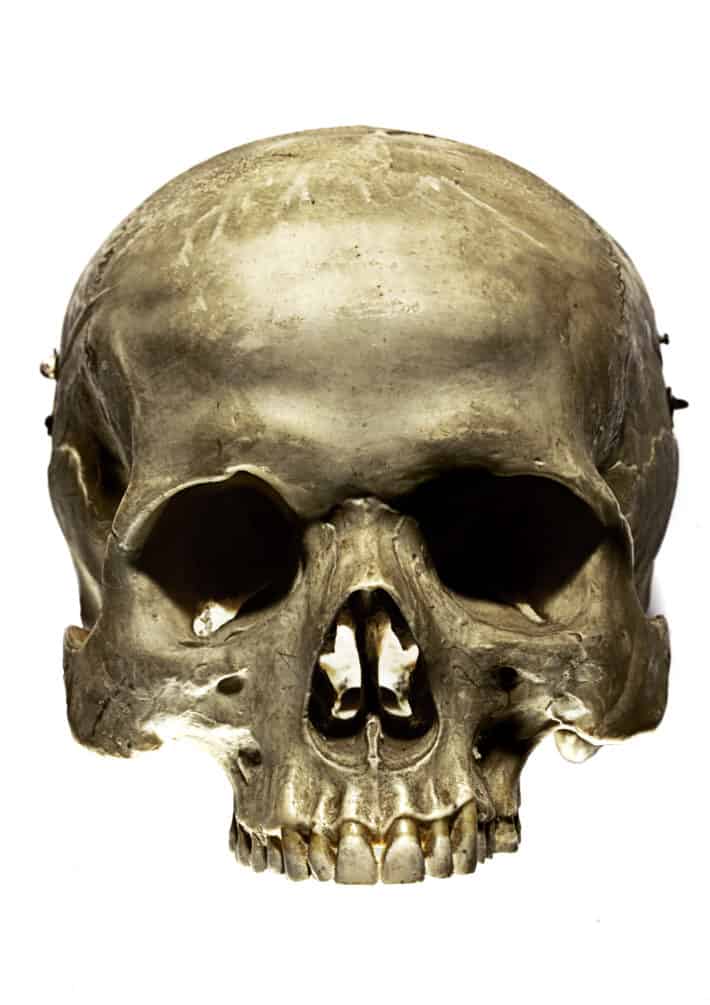 Halloween is one of those love it or hate it holidays.  I happen to love it.  The goth, the decorating, the darkness, the creep.  I love giving my house a dark, eerie quality.  Of course when you own a 180 year old house, you could fill it with marshmallows and rainbows and it would still have a dark, eerie quality.

I decorate the inside of my house for Halloween about 2 weeks before the event.  There's black netting and lace thrown around, spiders, weird things in jars, and bones piled up in strange places.  You know.  In places one wouldn't normally pile their collection of bones.

I hate the kids though.  Well not the kids specifically so much as opening the door for them every few minutes.  That bit I hate.    Stupid kids eating all my candy.  Also it really kindda ruins the dark vibe I have going on when little Susie shows up with her bright smile and sparkly princess costume.

So I guess I was wrong about that whole love it or hate it thing regarding Halloween.  Seems like you can both love and hate it.

7 years ago I tried a little Halloween DIY on a whim. I wanted a Halloween decoration inside that was quick, easy and fun to do.  A glow in the dark drawing on my staircase wall.

I did a big skull.

It still glows in the dark at night.

I forgot about washing it off after Halloween then when I noticed it again around Christmas I thought it was funny that it was still there.  And from there it was just a matter of always forgetting to wash it off.

Almost a decade later, yup, it's still there.  You don't see the glow in the dark paint on the white walls at ALL. Especially not in my dark stairway. Not until it's completely dark.

Don’t do this on really dirty walls because when you go to wash the glow in the dark paint or pencil marks off you’ll have a big clean spot where the drawing was and you’ll be forced to either live with it, or wash your entire wall/s

You don't have to draw something, you could also just write frightening words on the wall like - I'm watching you, Go Away, or my personal favourite, This Item Isn't on Sale Anymore.

I've included links to glow in the dark makeup paint in the how-to above, but if you're shopping for this during October MOST dollar stores sell glow in the dark paint so that's where to get it if you can.

The paint I used for this (that has lasted 7 years as I mentioned) was a $1 tube of glow in the dark face paint from my local Dollarama.

Why use face paint and not regular paint?

Because you can't wash regular glow in the dark paint off of your wall. 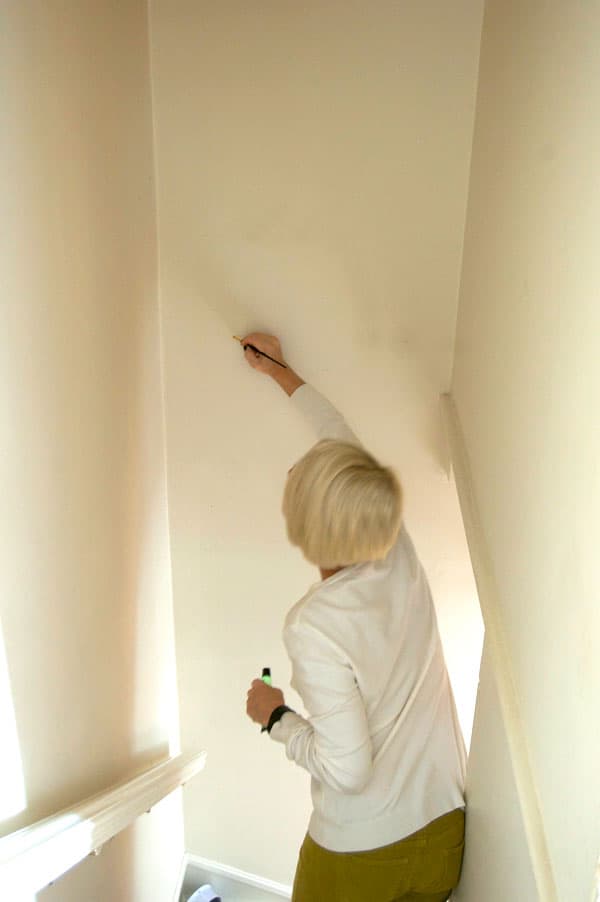 To do your skull portrait there's really only one thing you have to keep in mind.  Placement.  The glow in the dark makeup "charges" under light. So you have to do your picture on a wall that gets direct light for most of the day. Either from natural sunlight, or from a nearby lightbulb.   It also needs to be in a place that's going to be very dark during  the night so you can see it when it glows.

It's glow in the dark paint, not a neon sign so remember those two tips above.

I drew my skull on the wall freehand with  a small artist's paintbrush.  It's fairly hard to see where you've put the paint because it's basically clear, so feel free to do a really light pencil outline first on the wall.

(note:  Don't do this DIY on really dirty walls because when you go to wash the glow in the dark paint or pencil marks off you'll have a big clean spot where the drawing was and you'll be forced to either live with it, or wash your entire wall/s) 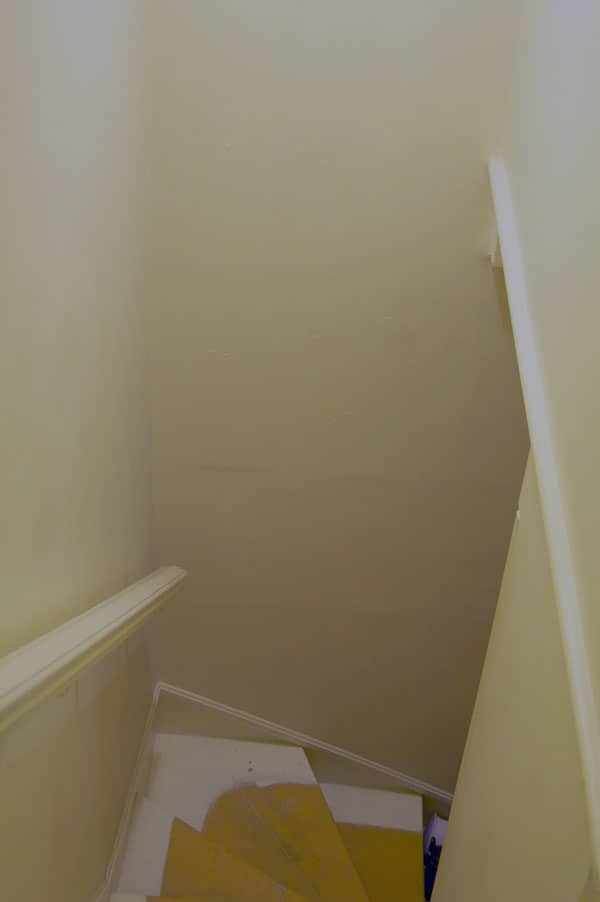 I chose to do the skull portrait at the bottom of  my staircase because there's a pendant light right there to charge the glow in the dark paint and the area is really dark in the middle of the night (which is when I wanted the skull to show).  If you strain you can barely, barely see the outline of the skull in the photo above. That's what it's like during the day.  You can't see it unless someone really points it out to you.

But at night, when the staircase is dark … 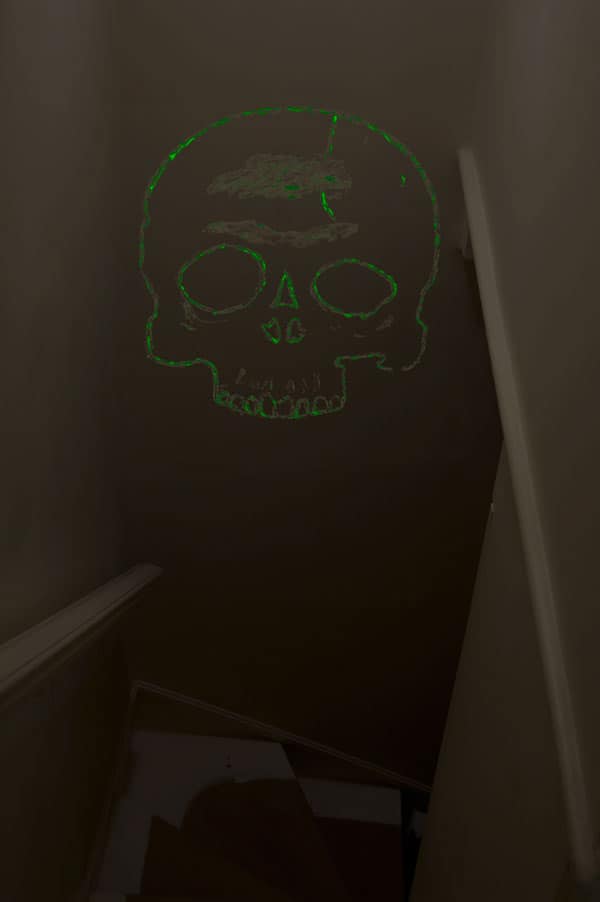 … it shows right up.

This Halloween craft WORKED OUT GREAT.

These are real pictures of my real staircase with the real glow in the dark paint.  And  yes. I've since painted those stairs.  One coat anyway.  I've been thinking about the second coat it for 5 years now. Stop rushing me. 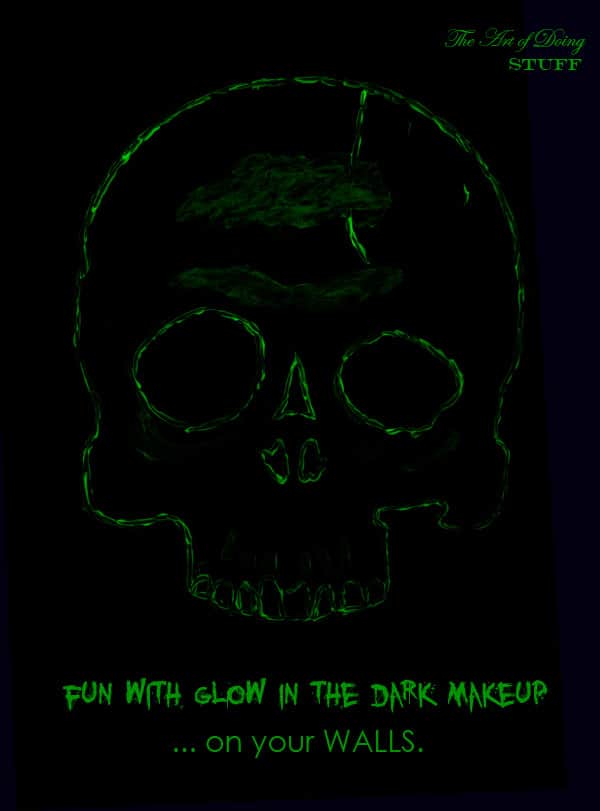 This is the image I used as reference for my skull. I should remember exactly what a human skull looks like since I had a pet one growing up. I brought it in for show and tell.

I originally did a crow painting on the wall but it didn't look like a crow for some reason.  It looked more like an elbow with a beak.  So I  washed it off and started over.

Which brings me to my next point.  The makeup washes off the wall no problem.  I just used a damp cloth to get rid of it when I made mistakes, so don't worry about that. HOWEVER, test your walls first just to make sure.  That's me covering my ass by the way.

You can do this project from beginning to end in about 15 minutes.  That's less time than it takes to eat a $18.99 box of assorted mini chocolate bars.

And just slightly more time than it takes to run out and buy another box. 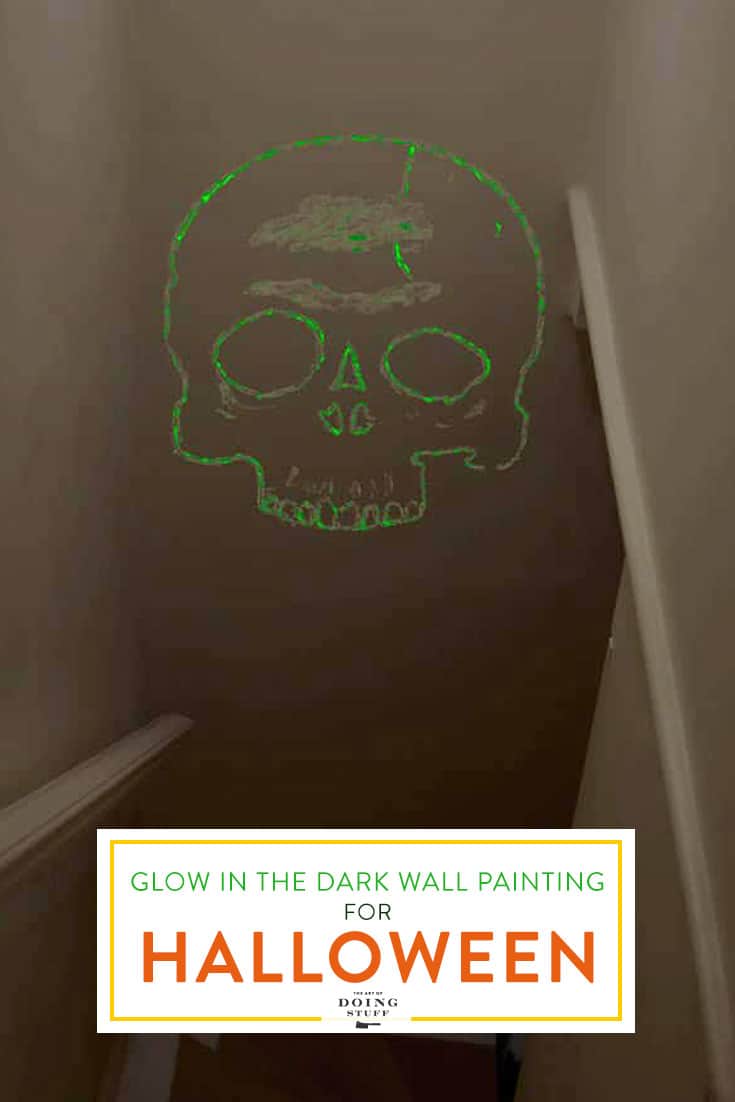