Turn bland, icky, solidified leftover mashed potatoes into delicious, pillowy gnocchi.  By just adding an egg yolk and some flour to that mound of mashed you'll create a pasta like dough that tastes delicious and comes together quickly.  Eat them right away or freeze them for a 10 minute meal later! 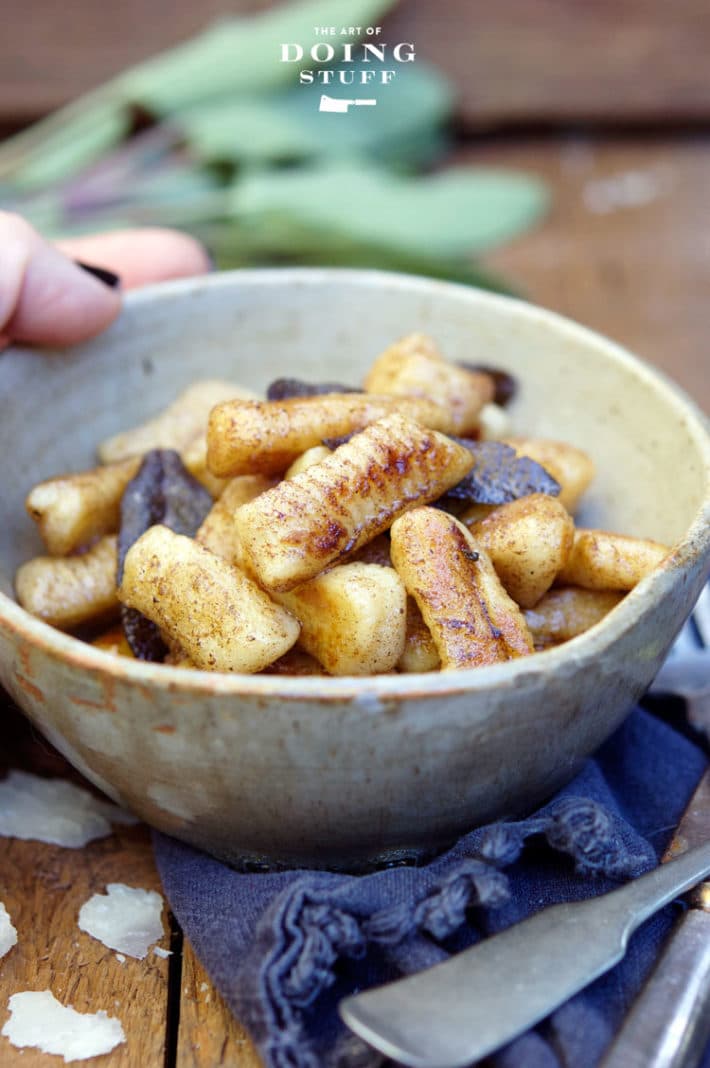 When I'm making dinner I generally count on one potato per person. Who can't eat a whole potato? I can eat several potatoes. Fried, mashed, boiled, raw ... doesn't make a difference.

I may have overestimated everyone else's ability to eat mashed potatoes until it bursts out of their belly button because I ended up with leftover mashed potatoes.

When my sister was helping me clean up she asked if I wanted to keep them.  "YES!  YES!  YES!!  FOR THE LOVE OF GOD, YESSSSS I WANT TO KEEP THE MASHED POTATOES!   Who are you??"

At the time I said I'd make potato pancakes with some and give the rest to the chickens.  You may not know this about chickens, but chickens loveeee mashed potatoes.

Gnocchi is a food sent from the angels.  Granted, they're the kind of angels who kick you in the nose ...  but nobody likes a goody goody.

If you aren't completely familiar with it, I'll explain what Gnocchi is exactly.

Gnocchi's a little dumpling that looks like pasta but is actually made with mashed potatoes. (sometimes it's made with other things, but we're focusing on potato gnocchi today since it's the most popular)  There is some flour and egg added in, like a regular pasta, but the base ingredient is potato.

They can be served with tomato sauce or butter and parmesan cheese.  Or anything else you can think up. Dousing gnocchi with browned butter and fried sage leaves is one of my favourite ways to make it.

This is not a recipe that you need to be too concerned about measurements. In fact, making gnocchi is more about the feel of it than the exact measurements. Like any dough!

is the same as 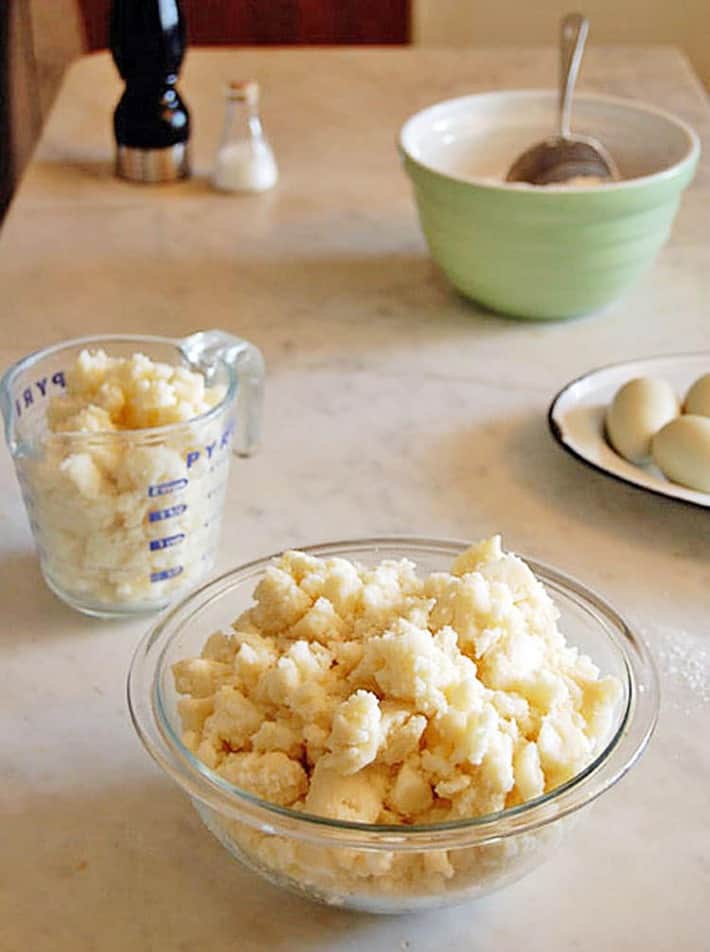 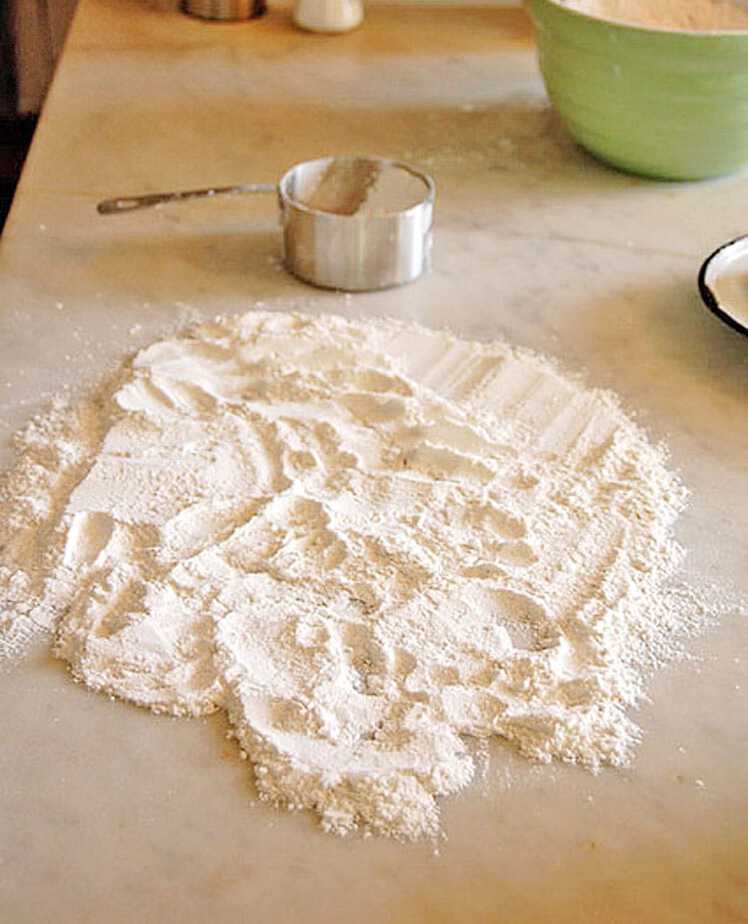 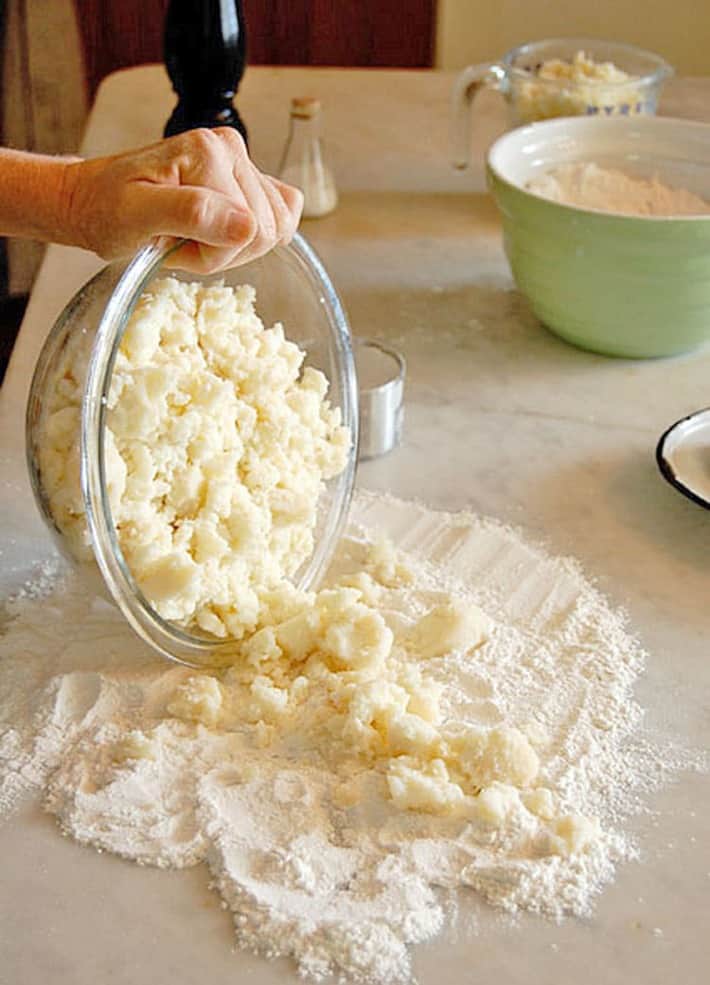 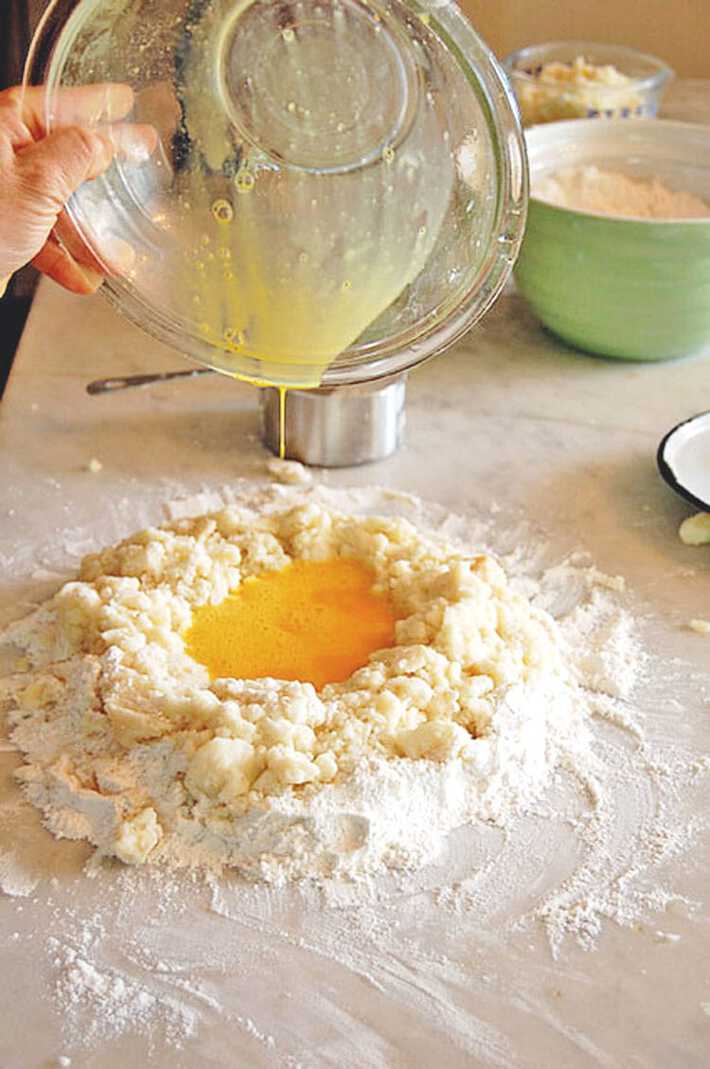 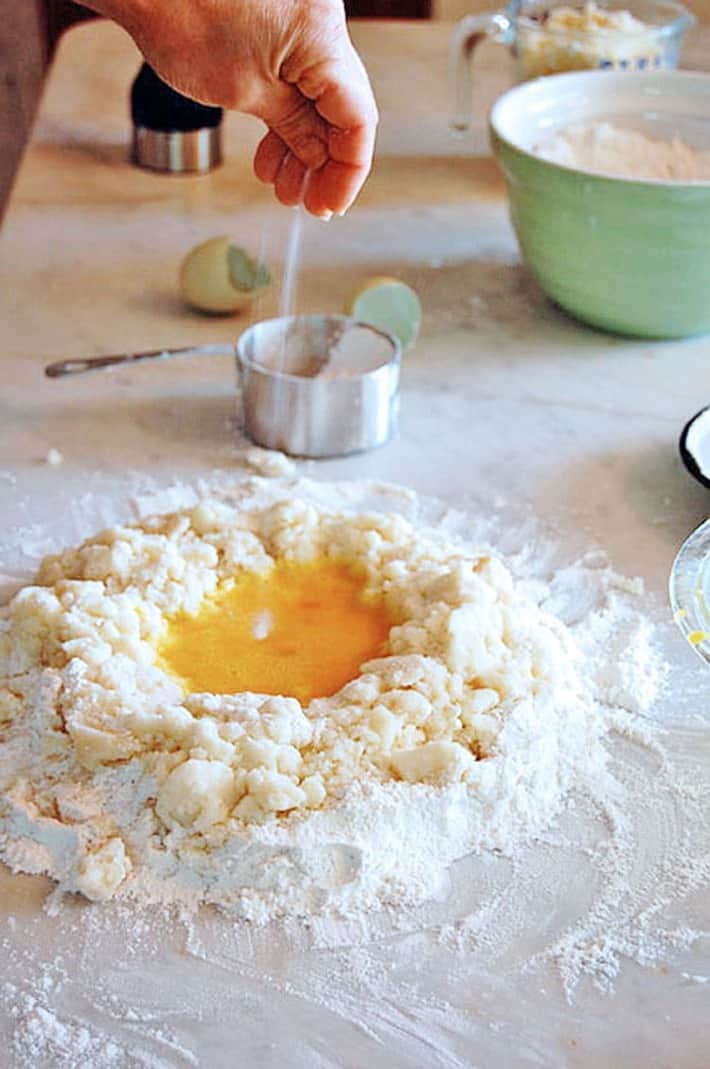 Pour half the remaining flour (½ a cup) on top. 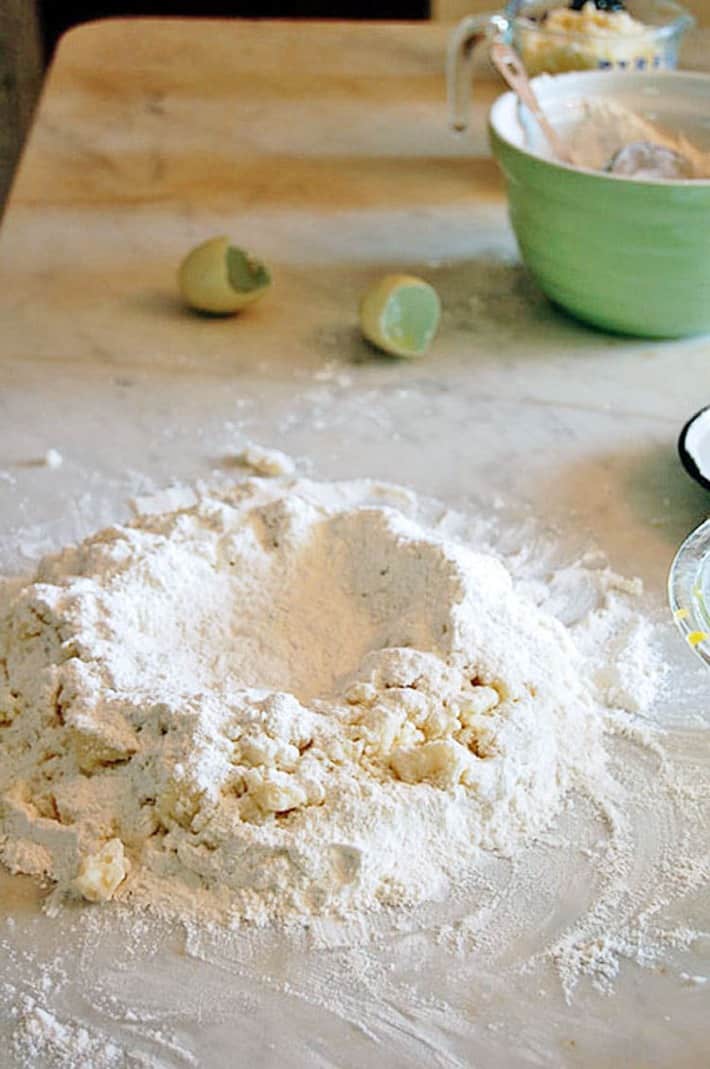 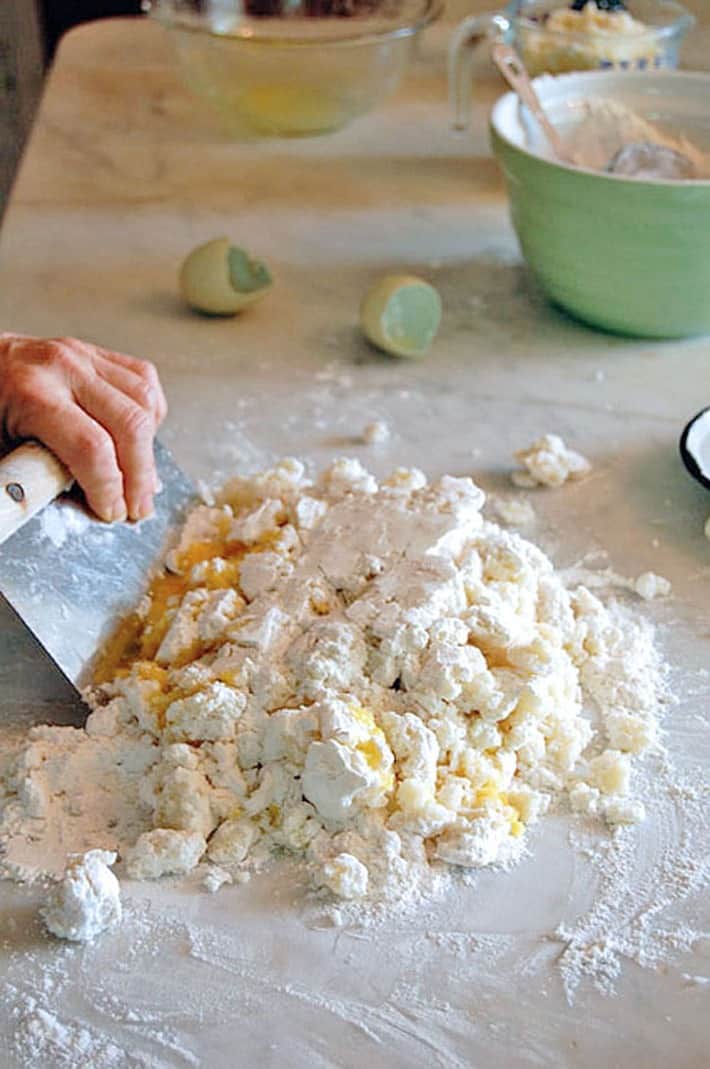 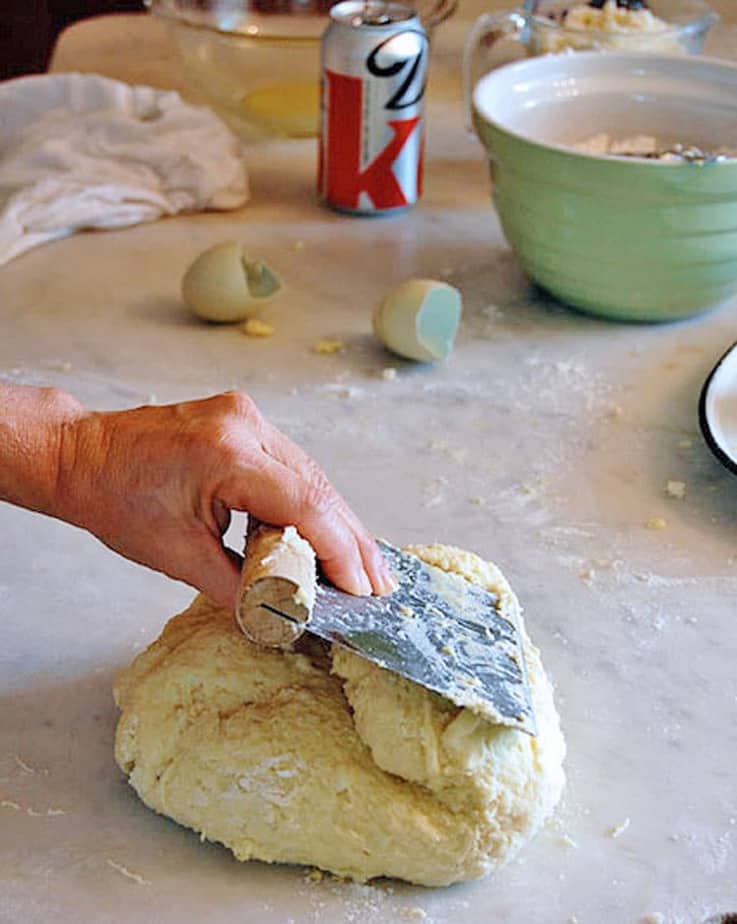 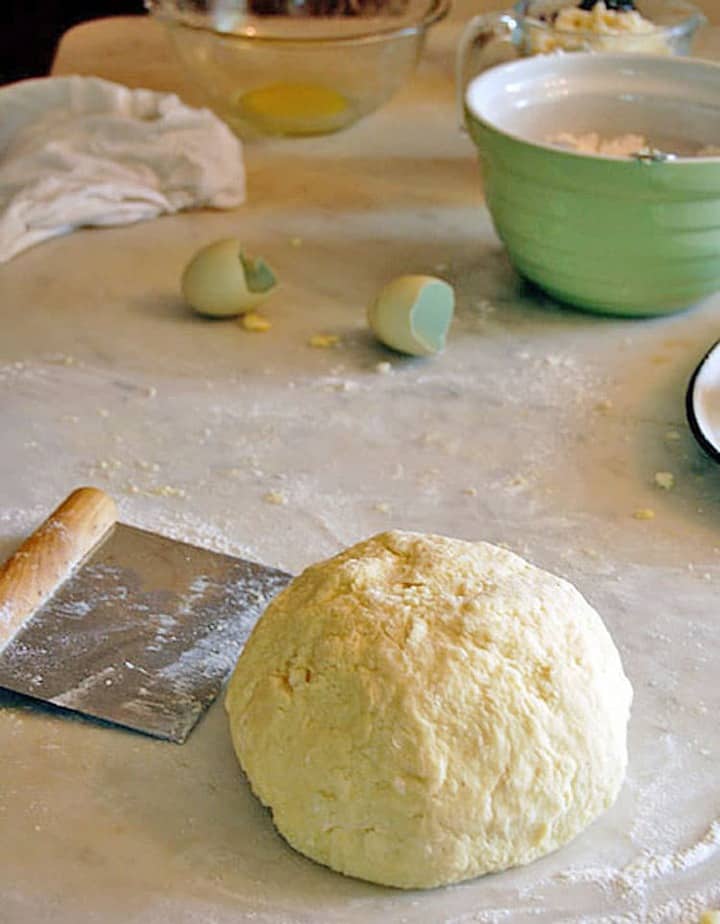 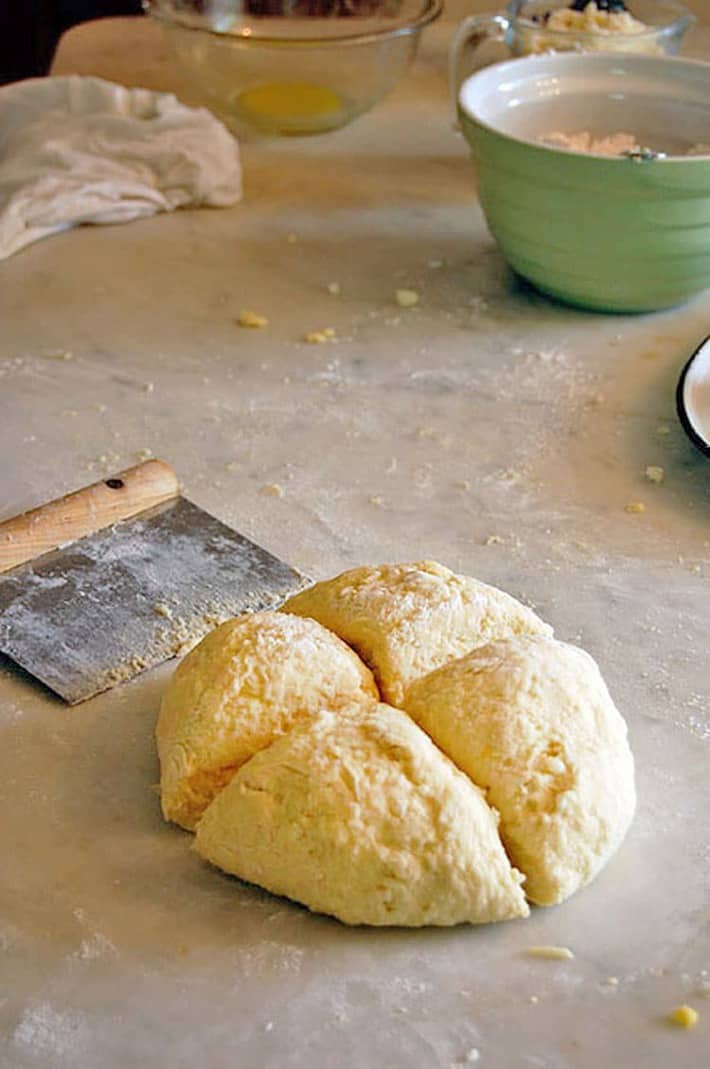 Roll the dough out until it's around ¾ " in diameter. 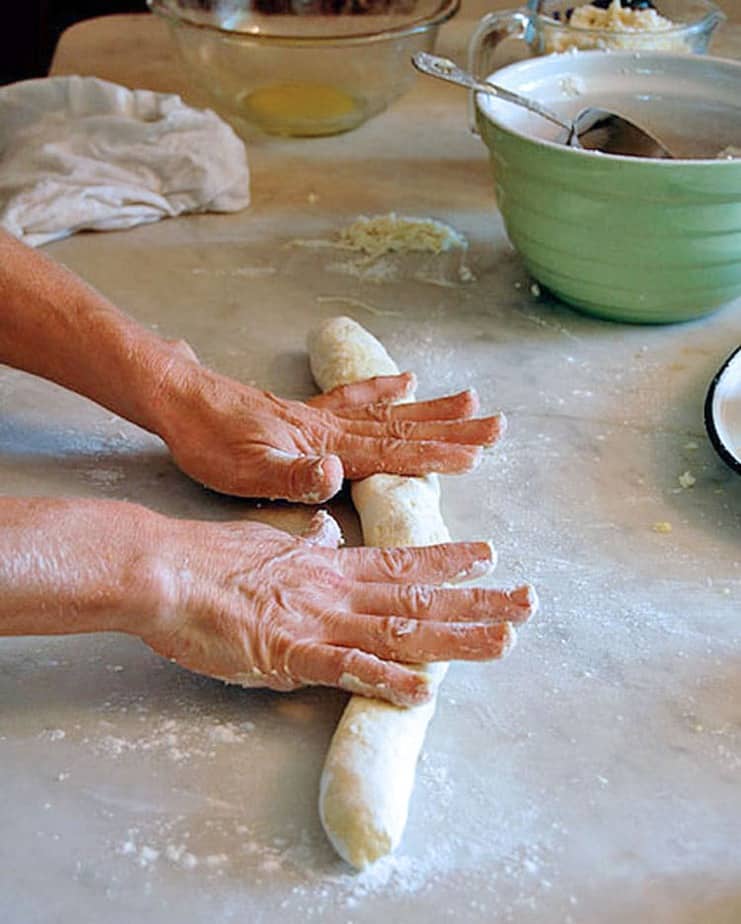 Using your pastry cutter or a knife, cut the rope into lengths of ¾". 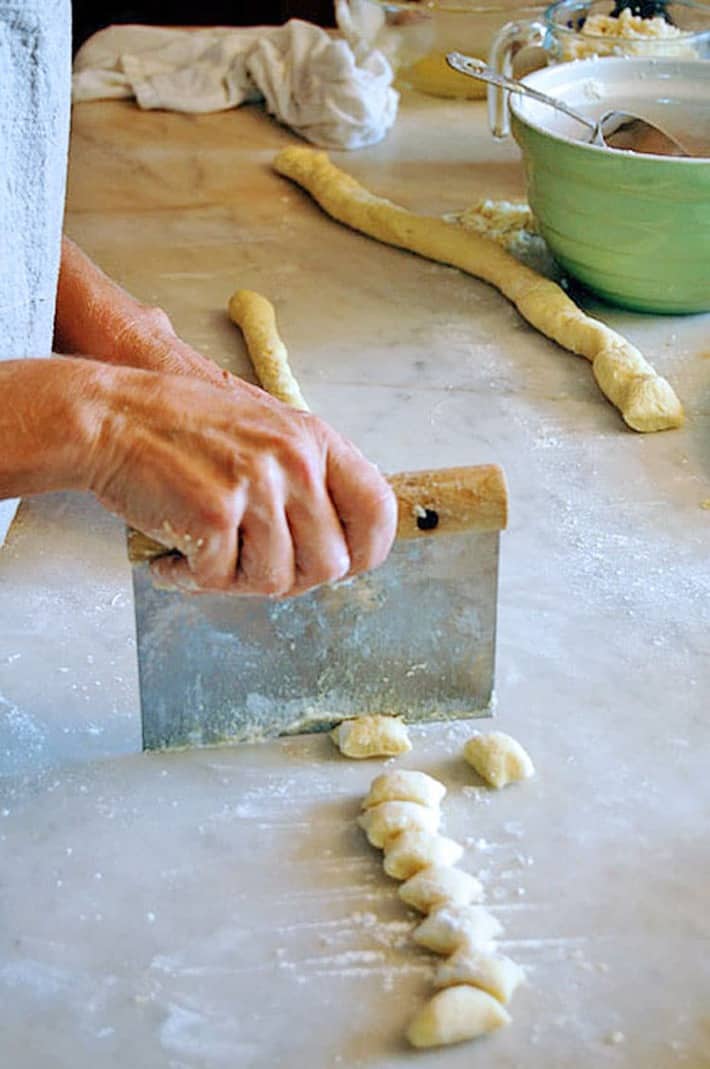 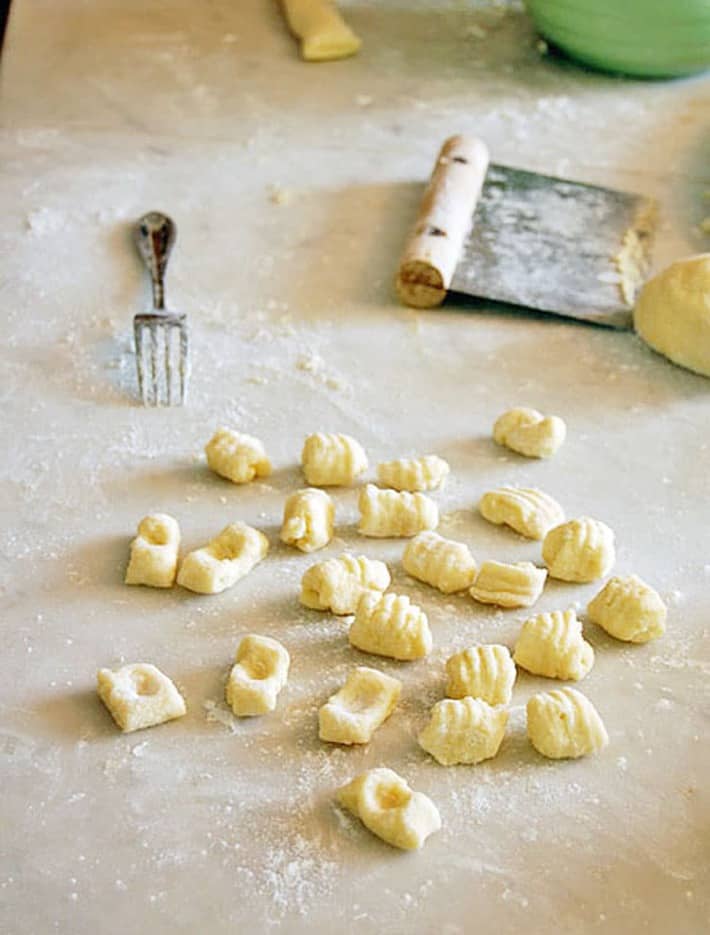 To get the classic ribs on the gnocchi, roll each piece down the tines of a fork.  It's takes some practice, but you'll get the hang of it. 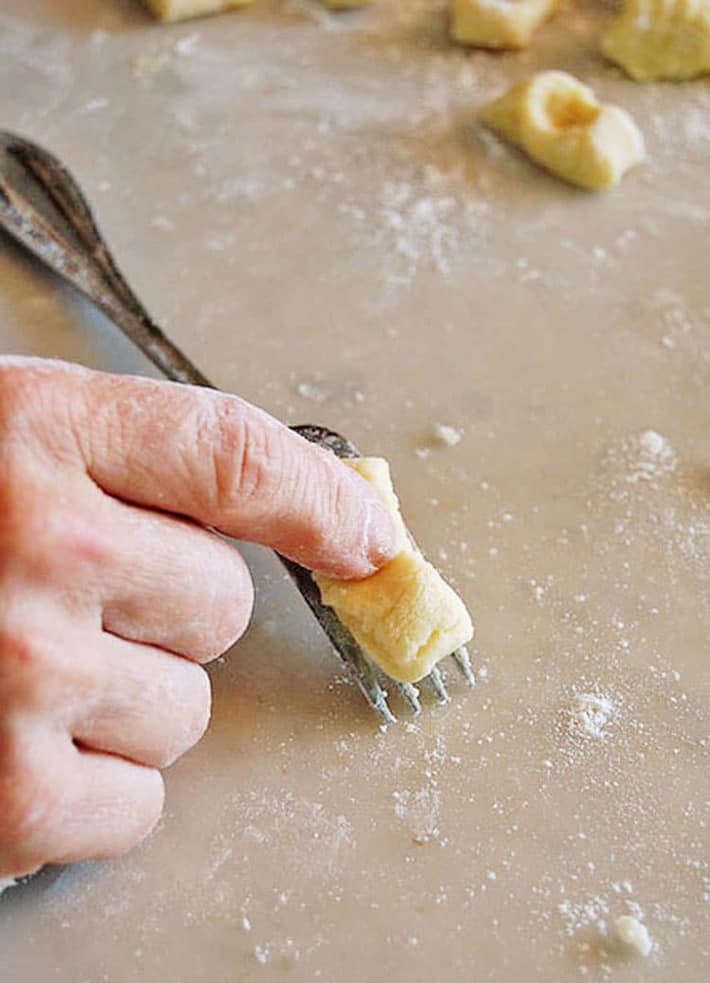 You aren't just sliding it down the fork, you need to roll it down.  Once you do it right the first time you'll yell, "ah HAH!". 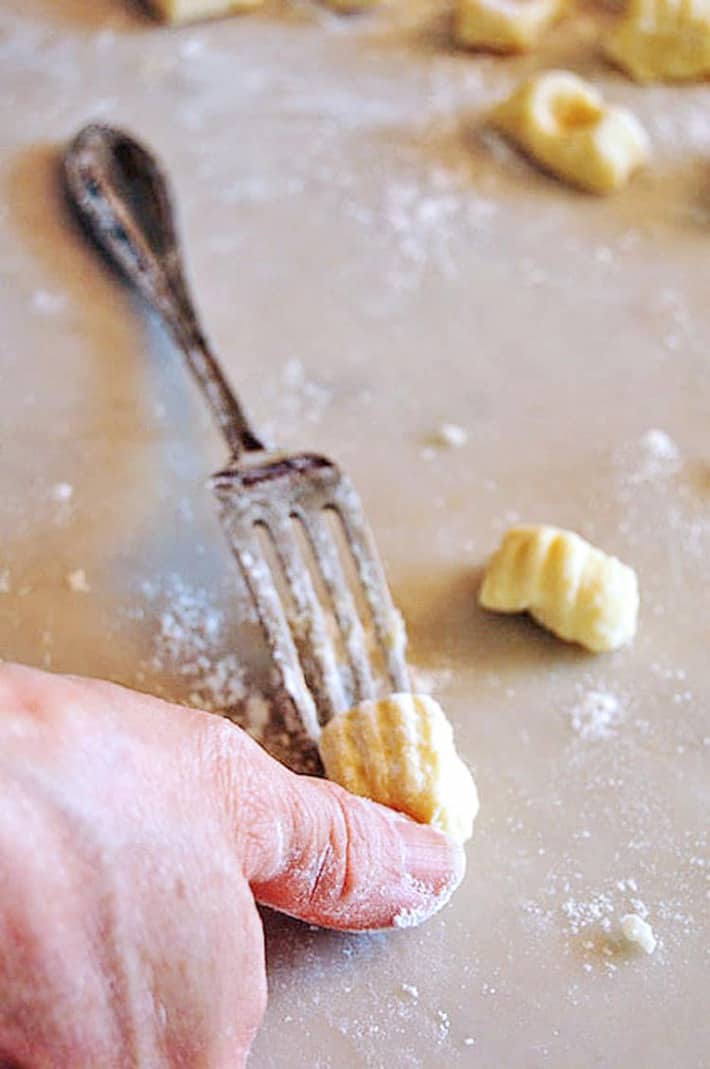 And then you'll run outside to drag someone in to show them. 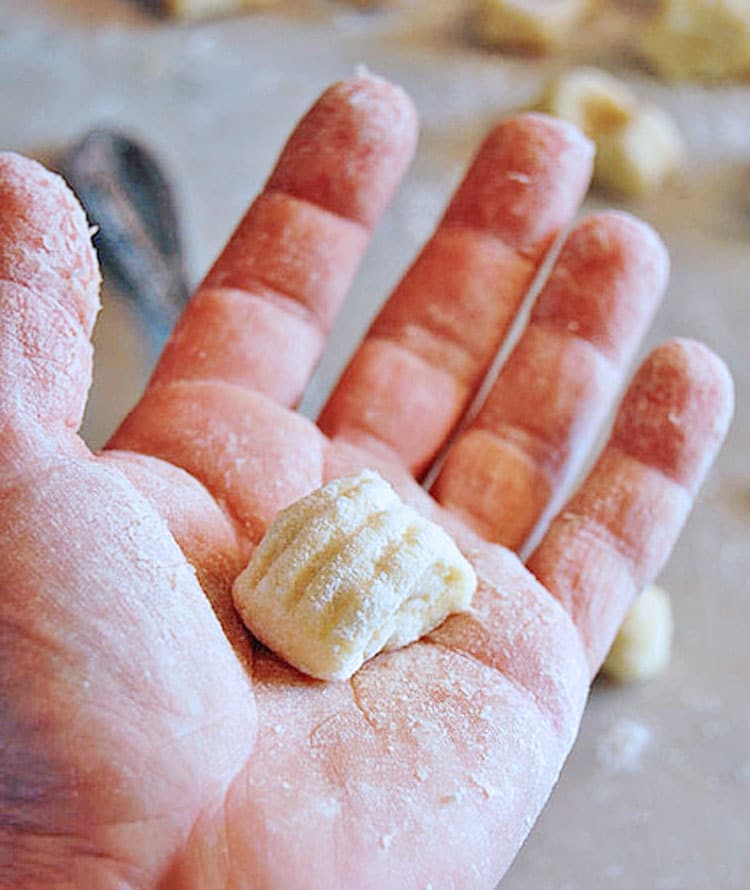 To make the thumbprint version, just poke your finger into the centre of the gnocchi.  Both versions are fine.  The reason you NEED to do one of these two methods is because it's the ridges and the indent that helps holds whatever sauce you're putting on them. 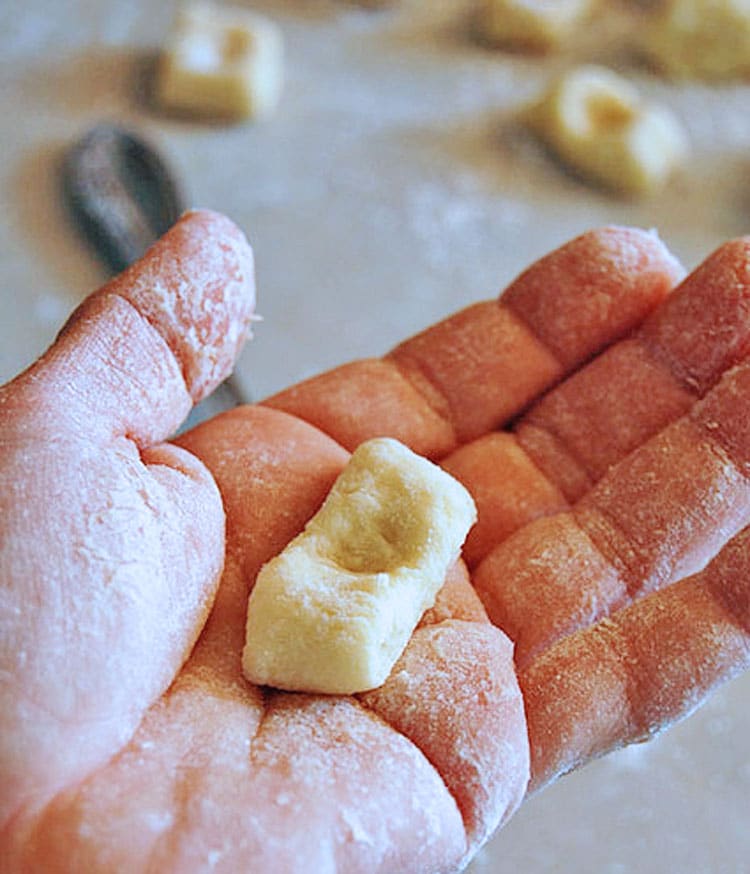 If you're planning to freeze some gnocchi, lightly flour a baking sheet, place the gnocchi on it and freeze.  Once frozen you can remove them from the pan and immediately put them in baggies or a widemouth mason jar.  These then go back in the freezer. Work as quickly as possible so the gnocchi doesn't have a chance to thaw out at all (because then they'll stick to each other).

To cook your gnocchi, drop them in salted, boiling water.  They're done when they float.  To make them even MORE delicious, pan fry them for a couple of minutes in butter and/or oil.

All this because I made an extra 6 cups of mashed potatoes. I won't make that mistake again next year. I'll make sure I have at least 8.