How I turned my basement stairs into storage. 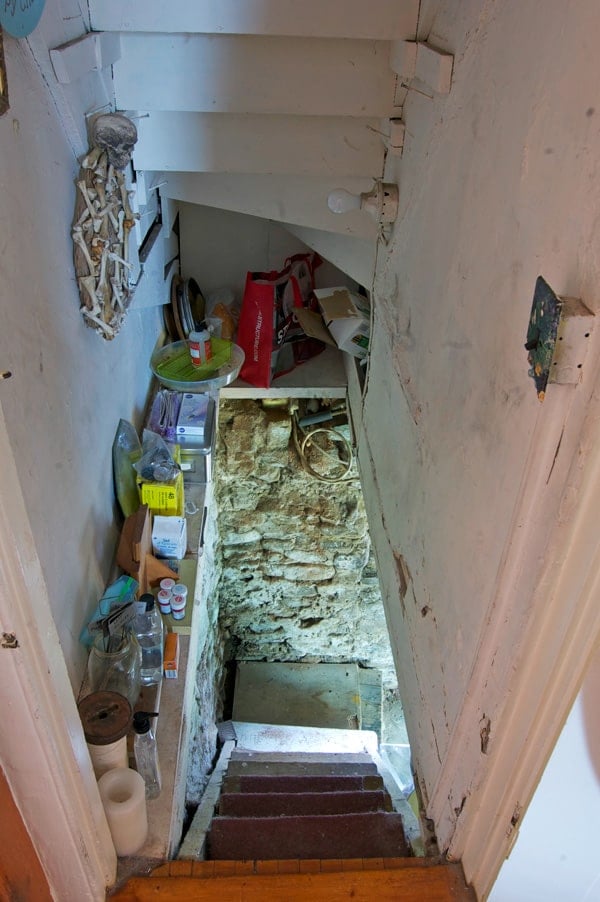 This is where death happens. 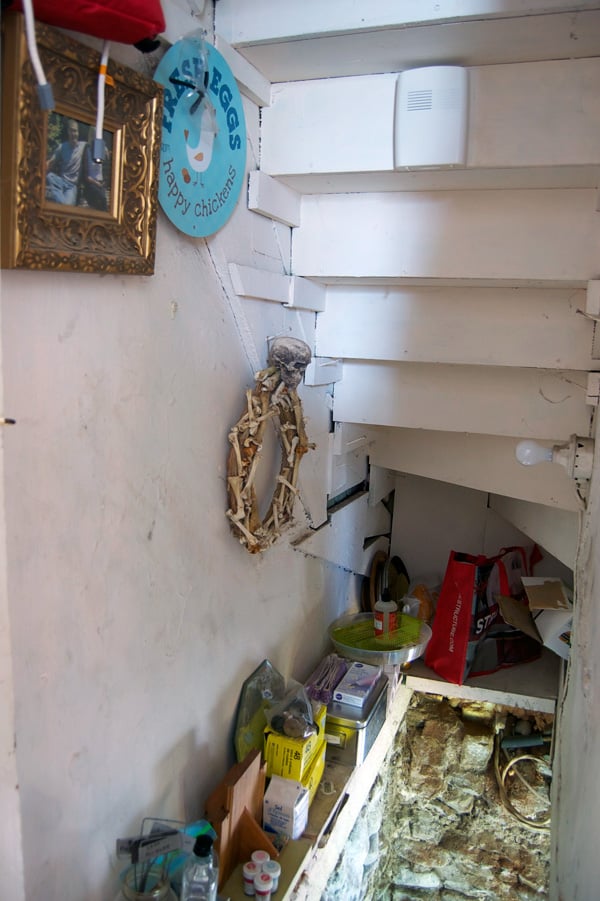 Not the ones that sell Girl Guide cookies though. Anything else is fair game though.  Those gas company hucksters, furnace companies, satellite dish pushers.  A guy selling birds door to door even ended up down there.  Death of a quailsman. 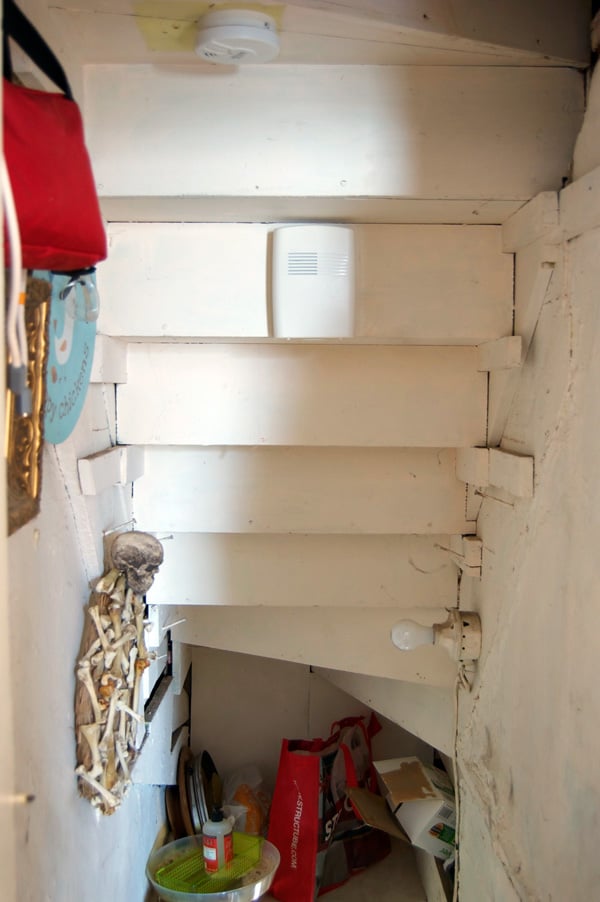 My basement is a horror show.  I’ve made it as nice as I can but it’s still the basement of a 170 year old house.  Complete with rubble walls.  And centipedes. And spiders.  And salesmen.   The stairs leading down to the basement are the worst.

But my basement stairs are one of those things I just walk past and don’t notice. We all have those things in our houses. I’m sure you do too.  The cobweb that’s been there since 1982 that you never noticed until your mother-in-law helpfully pointed it out.  They’ve been this way since I moved in and for some reason I just accepted that this is how they always had to be.

One sad little shelf on the left as you go down the stairs which gets packed with junk a couple of random nails on the walls to hang a thing or two on, chipping paint and crooked stairs, three of which have indoor outdoor carpet stapled to them.  Only three. You can see them in the first photo.   No idea why, but I’m guessing whoever had this house before me had a really intricate and interesting way of going down stairs.  Like hop, hop, hop, JUMP.  Something like that.

As I mentioned this is a 170 year old house. As anyone who owns an old house knows, this means 2 things.   Really curious plumbing and no closet space.

Now, when you don’t have any closet space it means you have to find places to put everything normal people would put in a cupboard or closet.  Putting in the new and fantastic kitchen helped with that but there are still things I had no place for.  Like my cookie making supplies and extra garbage bags and my festive salesman bones wreath.  And other perfectly normal stuff.  This is the sort of stuff that ends up on the shelf leading into my basement.

Then I realized I could actually fix this.  I could fix and change and improve the very stairs I’d been walking up and down every day for 17 years without ever considering I could make them better.  It was like having a wart on the middle of your nose for 17 years and one day realizing a doctor could remove it in their office in about 30 seconds.  Plus there’s the added bonus of being able to steal surgical gloves when they turn their back so win, win.

Really I just wanted more storage space.  And the stairs that go UPSTAIRS are directly above my downstairs stairs.  Which you can also see in the first photo. It seems obvious to me now I only needed to take one photo for this post.  That first one.

So my idea was the quickly put up a few scrap boards underneath the upstairs stairs to give me storage in my downstairs stairs.

The first thing I had to do was clean everything out of the stairway. 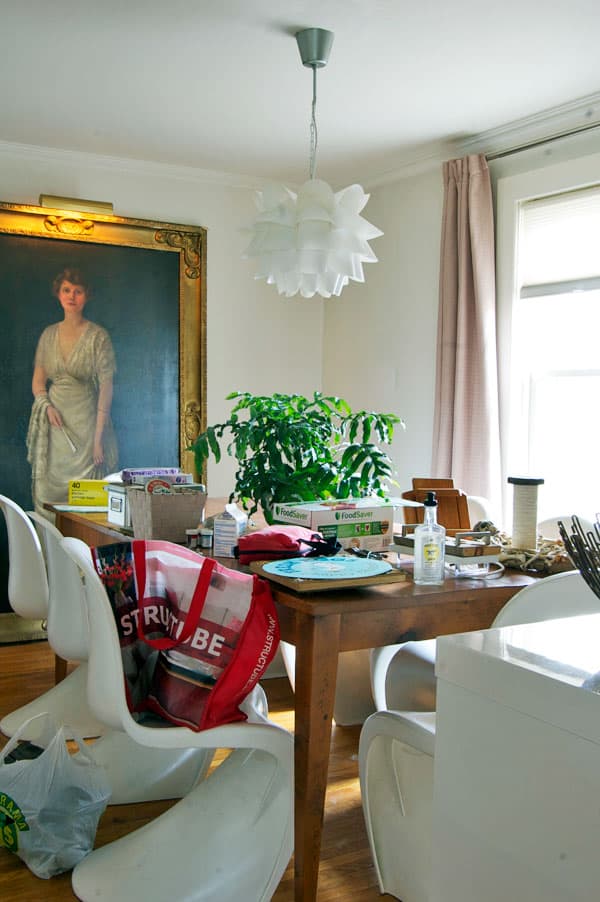 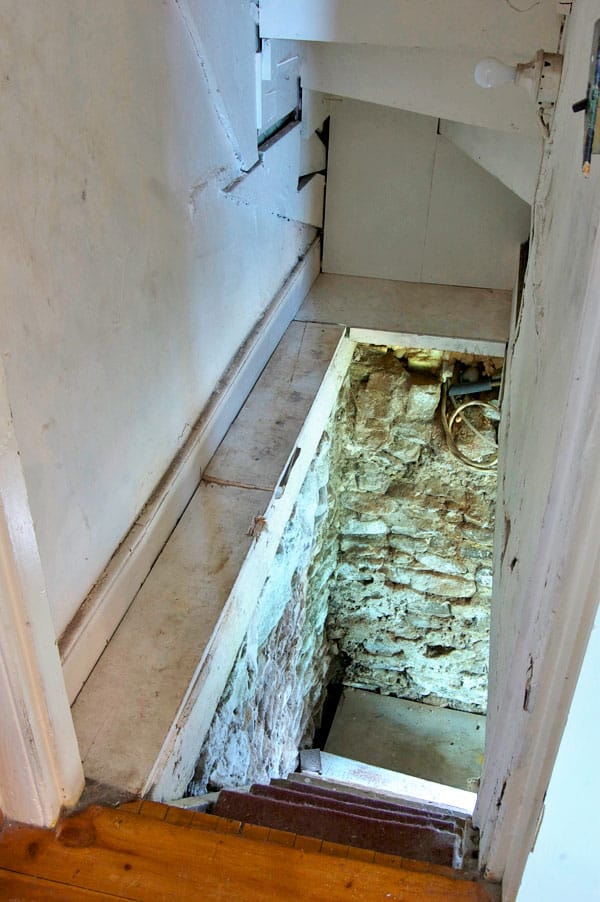 Even though it clearly didn’t really need any cleaning I thought I’d do a bit anyway.  Cause I’m OCD like that. Just as I thought it didn’t need cleaning.  I wiped, windexed, and washed for an hour and it looked exactly the same.  Maybe it looked slightly less disgusting but to make it look like anything less than a torture chamber would probably require a contractor. And an exorcist.

Finally I broke right down and got out the paint. I say “broke down” because that makes me seems like Ug, I have to paint, which makes me normal like everyone else.  When really I was all YAY! I can paint!   Paint would help. Paint helps everything.  That’s why women wear makeup.  So I painted the entire stairway. That’s just the beginning of where things went off course.

Then I did what is the worst home maintenance job known to mankind.  Or womankind.  Any kind.

I vacuumed Chez Centipede.  The rubble walls.  The rubble walls filled with cracks, crevices and holes which were swarming with giant black spiders, little spiders and centipedes, sashaying from one condo to the next having a great old time.  I sucked them all up.  I have a central vac with a huge canister so they were merely relocated.  They’ll stay there by the way until the next person buys this house because there’s not a chance in hell I’m ever going to empty out that canister now that it houses several generations of angry centipedes.

I did a few more things and then it was time for the shelves.  I had a junky piece of 1/2″ plywood that I painted white and cut to the width of my stairway.

Then I cut some slats for the wood shelves to sit on and screwed them into the walls.

And that is how I made storage shelves under my stairs. 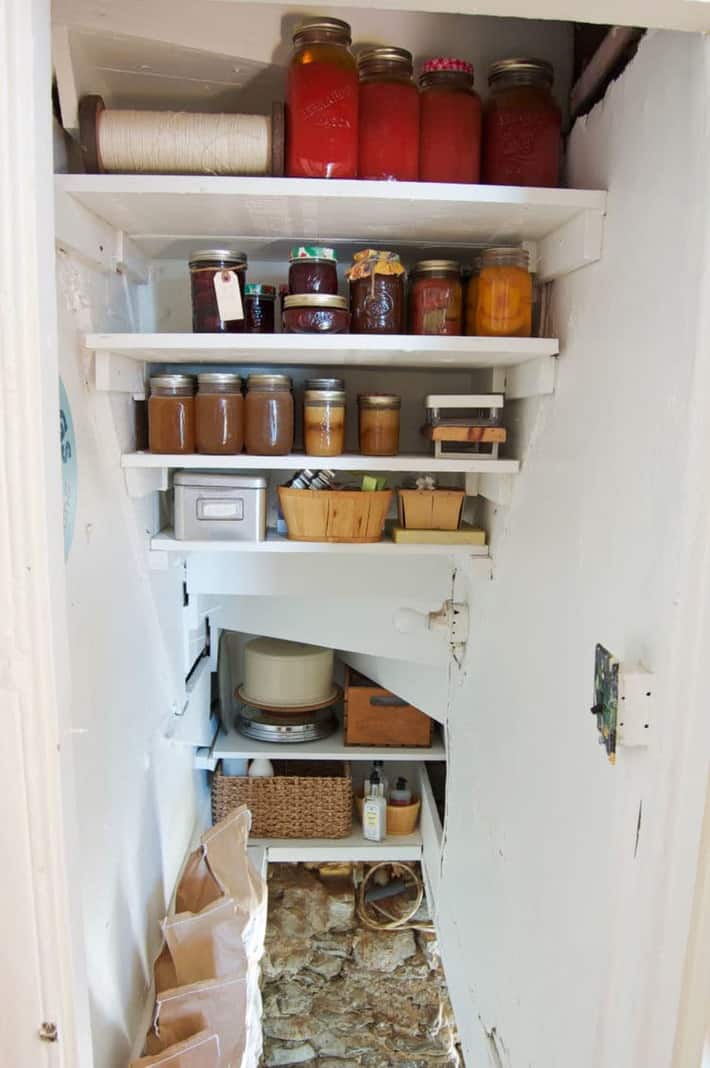 Yeah, it still looks like a bit of a nightmare but it’s way better than it was and that’s what counts. 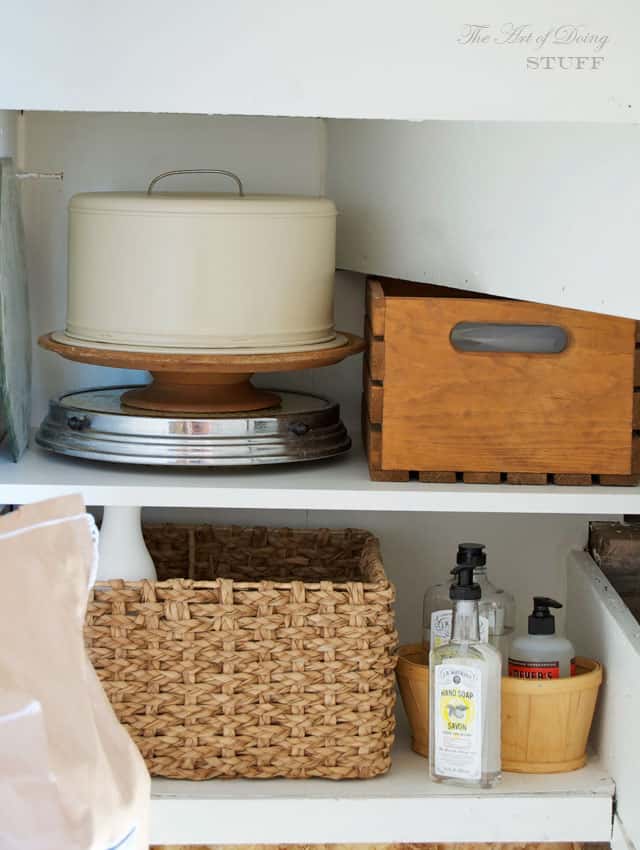 My stairway is now holding all the same stuff it was but it a much more organized and attractive way.  PLUS enough extra room was made that I could keep all my preserves there.  Normally they’re scattered around the house in different places.  The jars of peaches like to stay on my bedside table.  On more than one occasion I’ve woken up with a spoon stuck to my forehead. 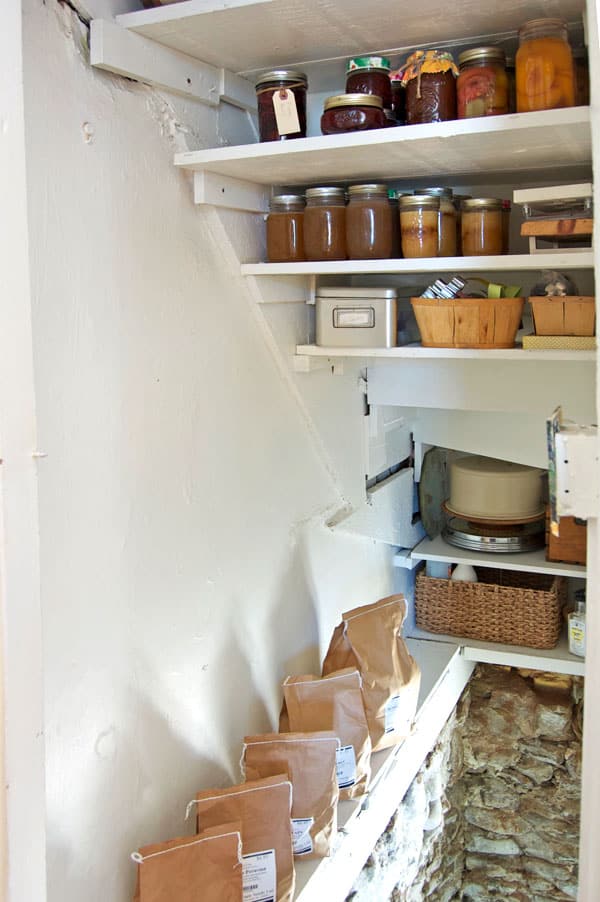 I also painted the sides of the stair rails and put down new indoor/outdoor rug on EACH AND EVERY STAIR. I know.  Extravagant. 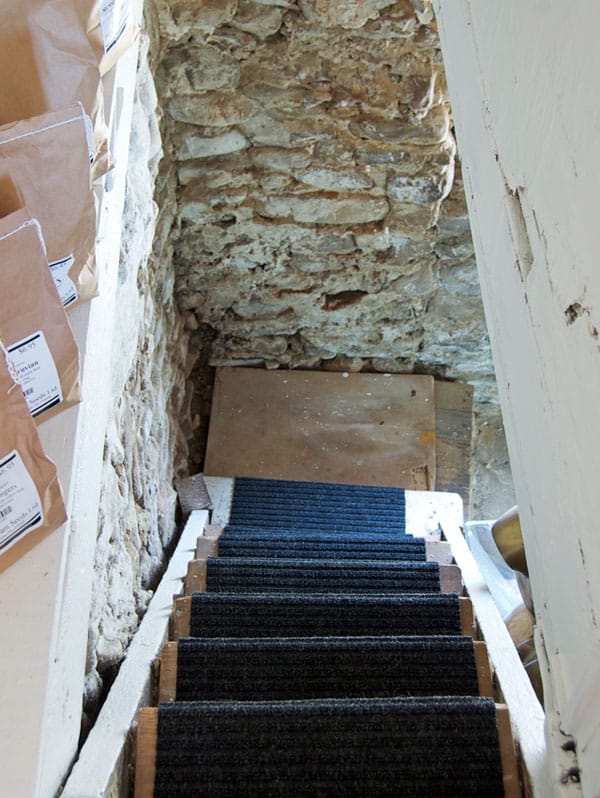 The stairs are still wonky and there’s nothing I can do about that.  They feel safer now and WAY cleaner. 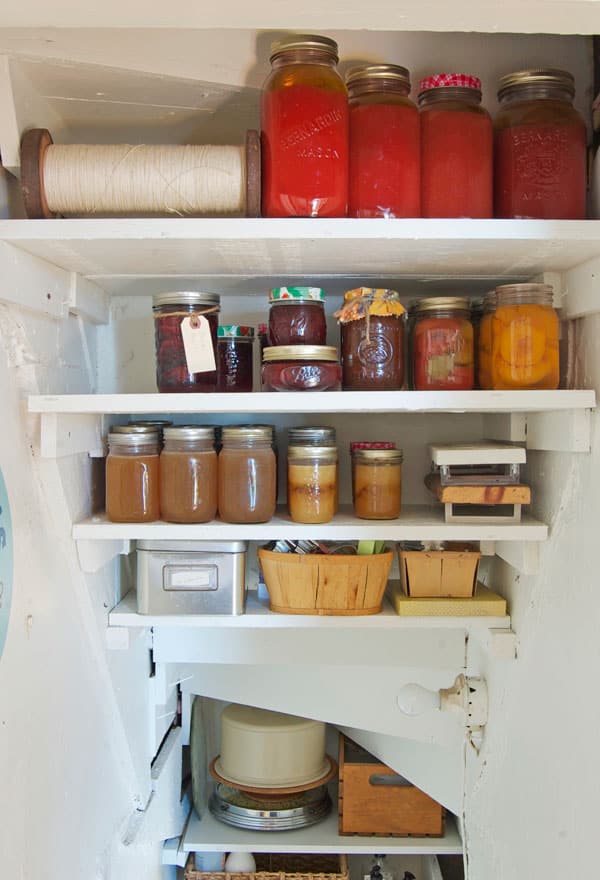 Plus now instead of being creeped out every time I have to go into the basement I kind of like it.  I’m greeted by smiling jars of jam, chili sauce, peaches and tomatoes.  The pickled beets don’t really smile.  They just aren’t that way. They’re kind of bastards. 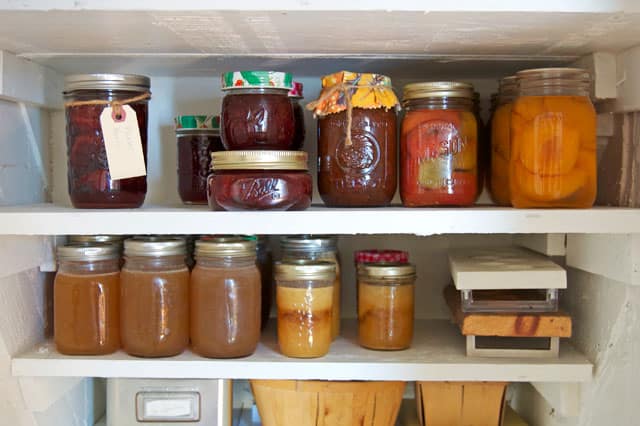 And now my shelf can hold things that are going to be there temporarily and only temporarily.  Like my bags and bags of seed potatoes. 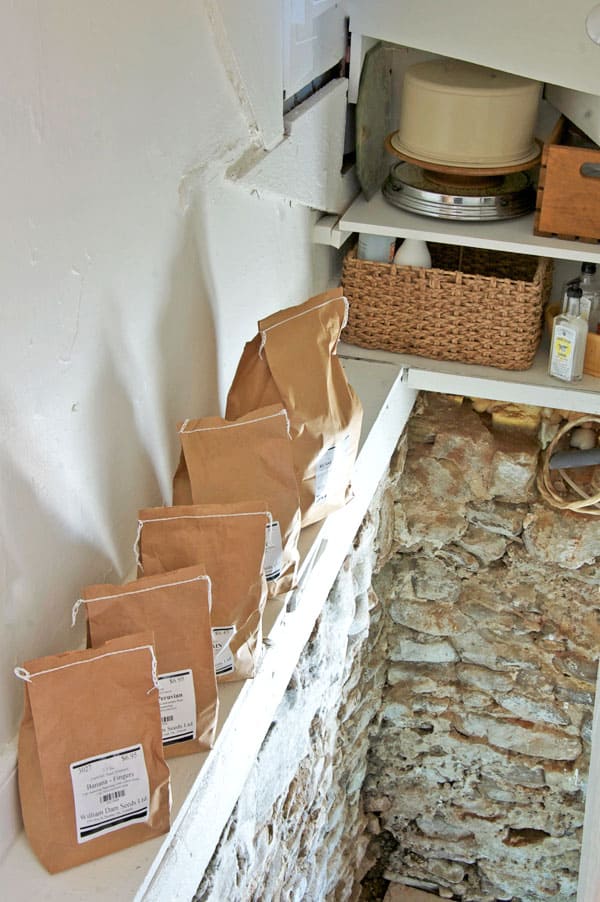 There are some people who will be able to take this very idea and apply it to your own home.  For the rest of you, let this be a reminder that sometimes awful things can be fixed fairly quickly.  Sometimes you don’t even notice the awful things so maybe take a day to actually look for them in your house.  You know.  Before your mother-in-law does. 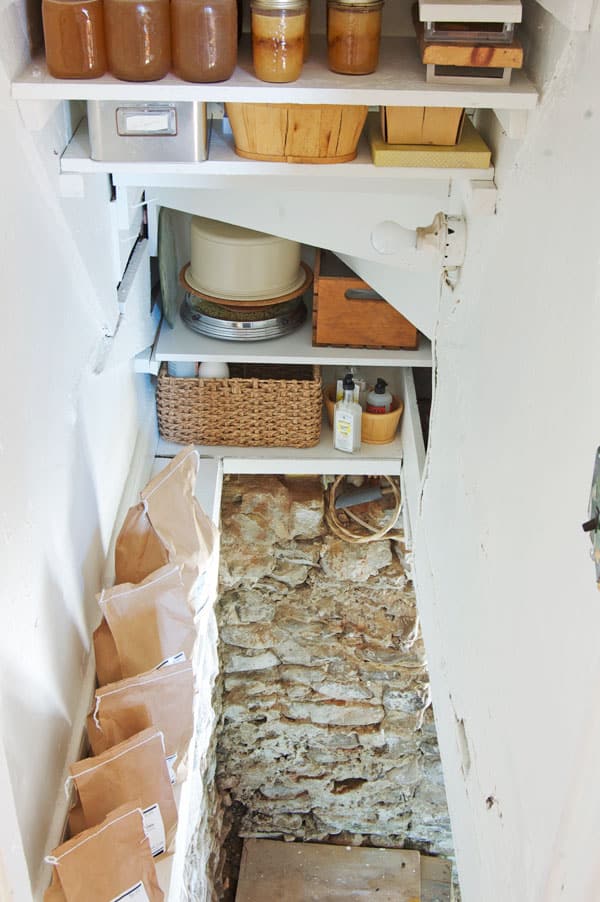 For all the door to door water heater salesmen out there?  I hope you learned a little something from this post too.