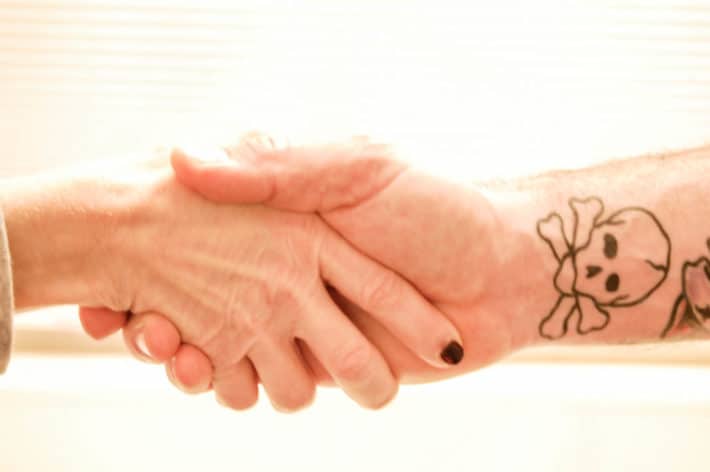 I have used the phrase "How do you do?" exactly once in my life. The year was 1989.   I was on a cruise ship, somewhere just shy of  Panama. This particular evening, all guests dining in the formal dining room were introduced to the ship's Captain. When it was my turn to be introduced to him, for some completely unknown reason, the phrase "How do you do?" popped out of my mouth.

It was as though for a moment I thought I was Gloria Vanderbilt being introduced to the Queen on the set of Dynasty.

The only time I remember something equally awkward coming out of my mouth was in grade 9, in the gymnasium of my highschool.  As Duncan MacIntyre sauntered past me ...  I said, Greetings.  A word that normally ends with ... earth people and is only uttered by Mork from Ork.

Back to the matter at hand; introductions. The whole point of proper etiquette is to keep everyone at ease. They're like the rules of the road for social situations. So if you're having a New Year's Eve party this year or going to one, this little etiquette tip on how to introduce people might come in handy.

Over the years we've become quite casual about introductions.  So casual that I have no idea how to do one.  I can bumble through the introduction of 2 people if I have to, but I'm never sure who I'm supposed to introduce to whom.  I'm not even sure if that's the proper use of whom.   So I whipped out my trusty 14th Edition of Emily Post's Book of Etiquette and opened it up to page 1.  THAT is how important giving a proper introductions is; the subject of The Basic Rules of Introductions is covered on the very first page of the book. 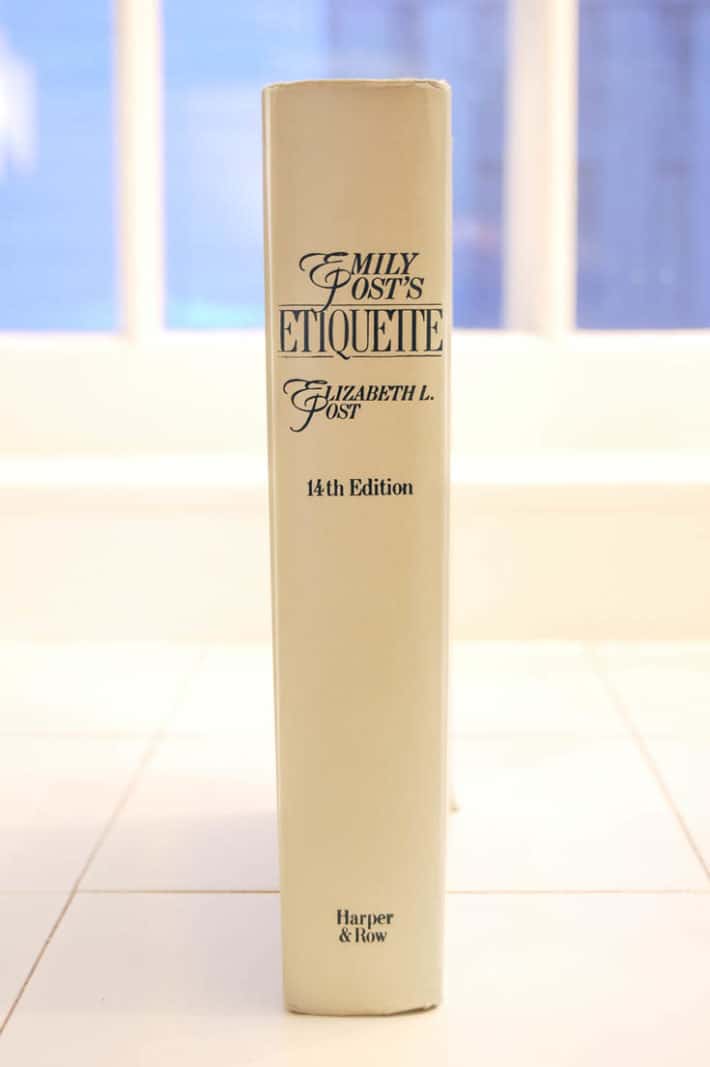 According to Ms. Post, it's all very easy.  All you have to remember is the fact that introductions are based on who is more important than who.  Or whom.  For instance:

Women always rank above men "Unless the man is the President of the United States, the head of another country, a member of a royal family, a church official, or an older man in a high position such as a governor.".   Translated into today's society I imagine that would also include any male cast member of The Curse of Oak Island.

An Older Person always ranks above a younger person.  No mention of royalty here by Ms. Post.  For instance, what do you do if you're introducing an older woman to a young member of royalty?  Oops.  My head just exploded.

A More Important Person always ranks over a Less Important Person.  Emily does mention that this can be tricky sometimes.  For instance a physician would rank over a garbage man.  Unless a garbage strike was going on I imagine.

Let's say I have 2 friends.  Mark my boyfriend and Kathy my longtime friend.  Mark may be more important to me, but Kathy is a woman, so Kathy gets the honour of being considered the more important person.

In this case both are women, but Snooki is "higher ranked" because she throws up on television.  Better yet, she has people throw up on her, on television.  Honestly. It's the truth.  Watch Season 1 of Jersey Shore if you don't believe me.  Emily Post would be startled by these people.

So when you use the phrase, "introduce you to",  with "to" as a preposition, the most important person is mentioned last.  Gosh.  Ms. Post was right.  This really is easy.  Oops.  My head just exploded again.

The other way to introduce people is by losing the preposition "to".  In this case you say the name of the person who is more important first.  As in ...

2.  Snooki (highest rank 'cause she's more important), I'd like you to meet my good friend Kathy.  Kathy ... Snooki is a reality television star.

Most important to remember is when NOT to introduce people.  As noted by Ms. Emily Post ... 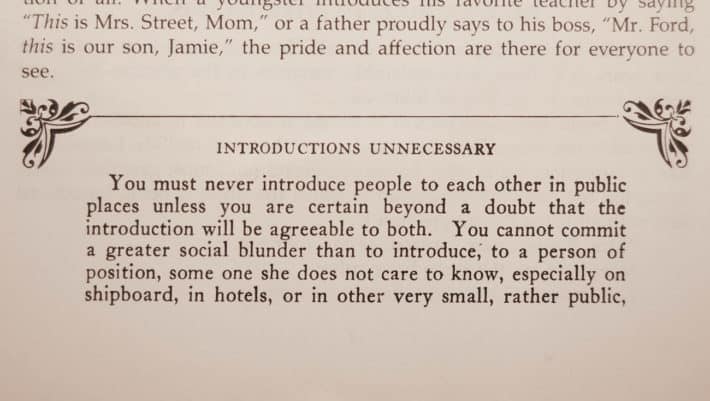 I know this all seems confusing.  And it is.  Which is why no one properly introduces anyone to anyone anymore.  This basic downfall of society is also what led us to things like the Jersey Shore and throwing up on each other as a form of introduction.

I'll try and simplify things here.  Just remember this, and you'll be O.K.:

How to Make an Introduction

Say the "most important" person's name first, followed by the "lesser important" person.  Acceptable phrases are "like you to meet", "have you met", "do you know", and the most popular and simplest of them all ... a favourite of Ms. Post ... "this is".  As in:

Ms. Morgan (most important cause they're your boss), this is our latest Avon sales associate, Lisa.

Mom (older and a woman), this is my boss Mr. Jinglebottom.  (since my mother doesn't work with me, she being a woman,  ranks over my boss ... the man)

Michelle (older), this is my niece Kiki (younger).

(in business situations the ranking of women over men doesn't apply)

I find a damp rag, some Ajax and a clothing steamer is the best way to clean up an exploded  head.  In case you were wondering.

Thank you to Emily Post for her help.  (Always thanking people is a sign of good etiquette.  Even if their help wasn't very helpful at all.)  I can't wait for your thank you's to start rolling in ... 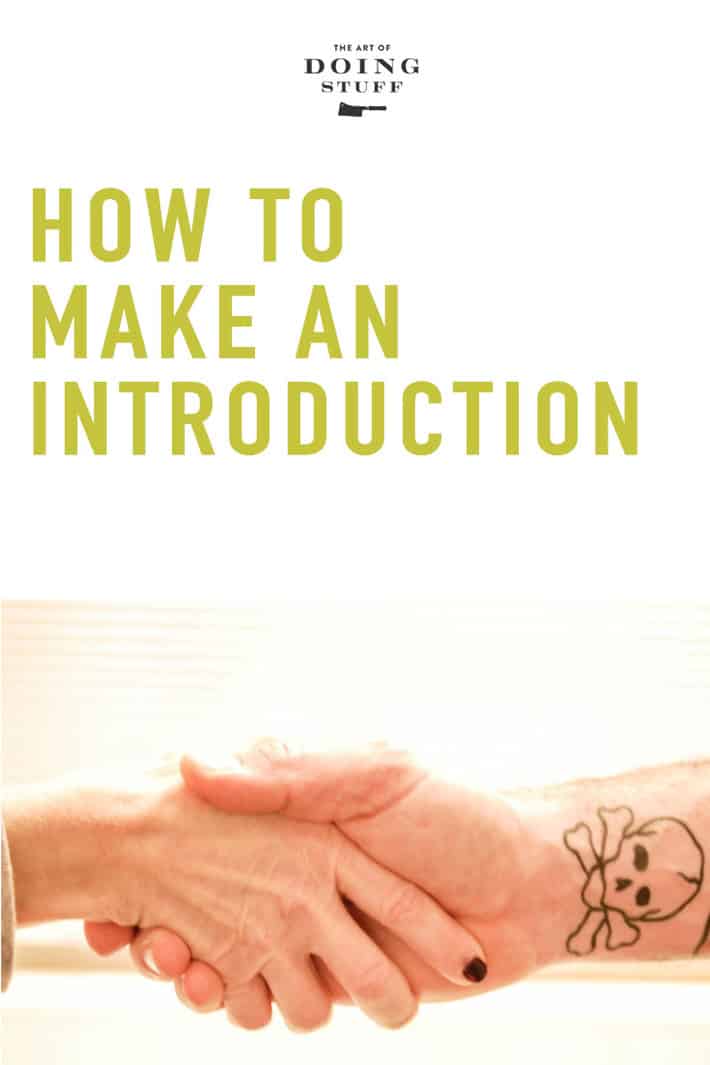