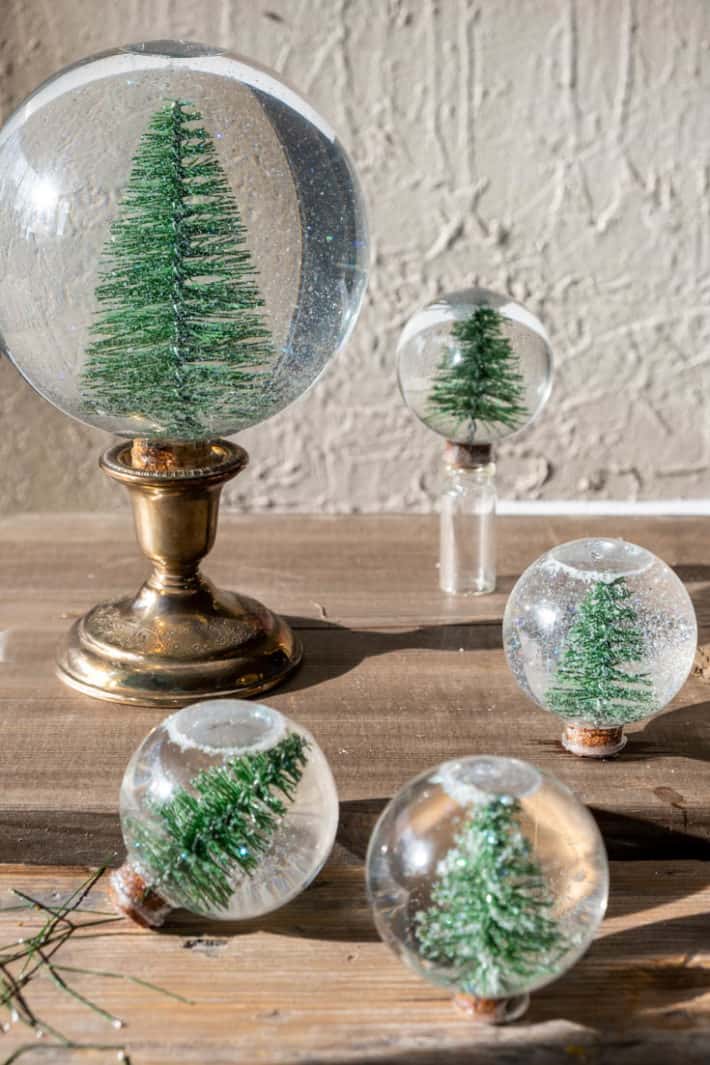 Why make your own snow globe?  Because you can put anything you want in it. If you want the bare bum from a Ken doll in your snow globe you can do it. Although you shouldn’t, because bare bums aren’t very much in the spirit of Christmas.  Usually.

Pinterest is bursting with mason jar snow globes, but to me – that’s not a snow globe. It’s a snow jar. I like regular, round, snow globes. These snow globes use a clear Christmas ornament and a cork. They’re simple enough that a kid can make them.

So here we go, you and I are going to make simple Snow Globes.  Right here.  Right now. 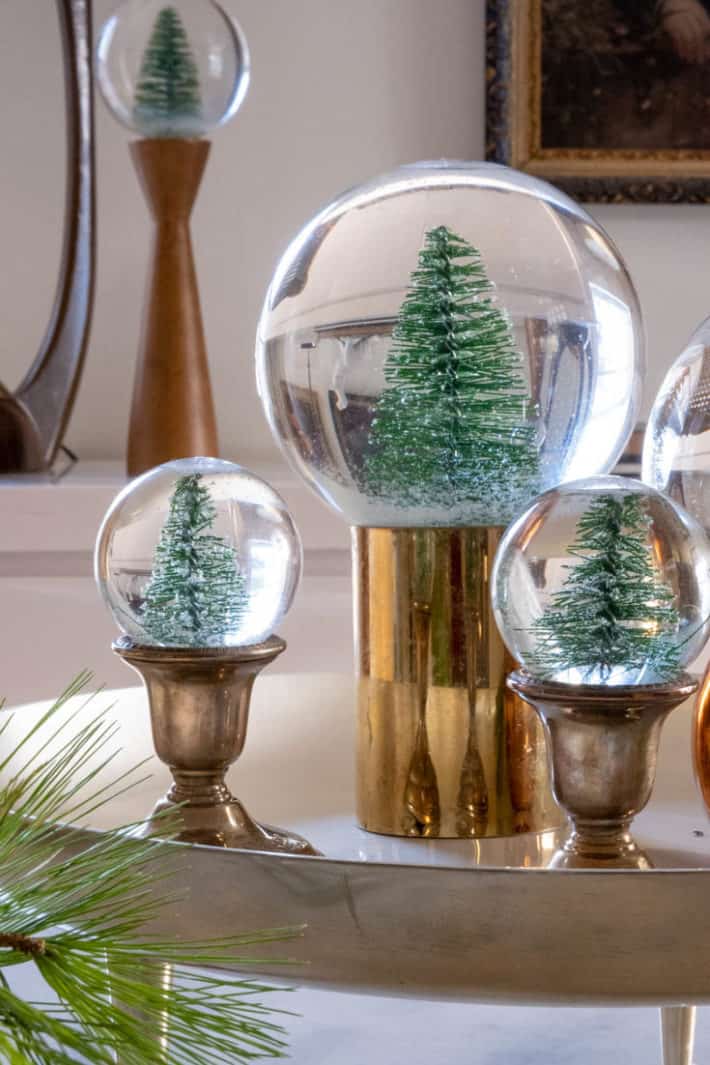 The possibilities of what you put in your snow globe are as never-ending as the last children’s dance recital you went to.

But there are a few restrictions. It needs to fit into the neck of the Christmas ball and it needs to be something made of – plastic. Yes. I said it. Plastic. Or rubber.

That’s because if you use an item that has some metal on it, it will rust and turn the water murky. If the item is bendy, you can put something quite big in the snow globe, like the simple trees I chose.

My simple trees happen to have wire, but I’m crossing my fingers that it’s steel wire that’s been treated to prevent rust.  I’m a risk taker like that.  I also run on slippery floors in socks. Risk TAKER.

How to Make a Snow Globe 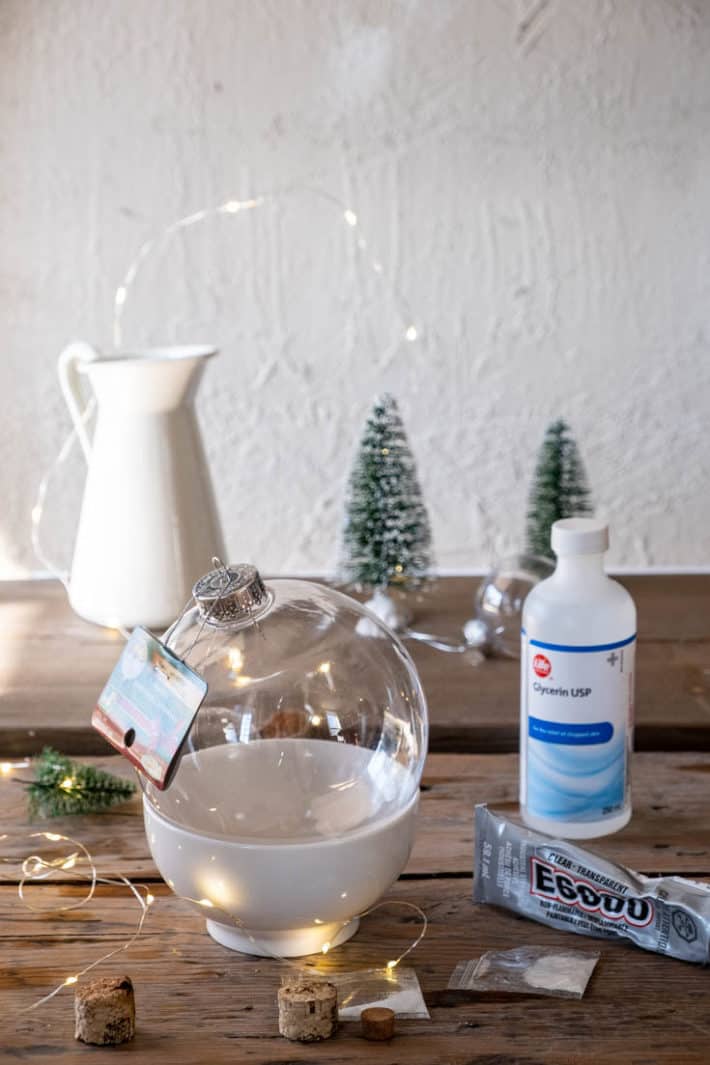 Remove neck collar from the ball.

Fill with distilled water and 2 drops of glycerin.

Push tree “trunk” wire into the centre of a cork and shove it into the globe.

Glue the hell out of it. 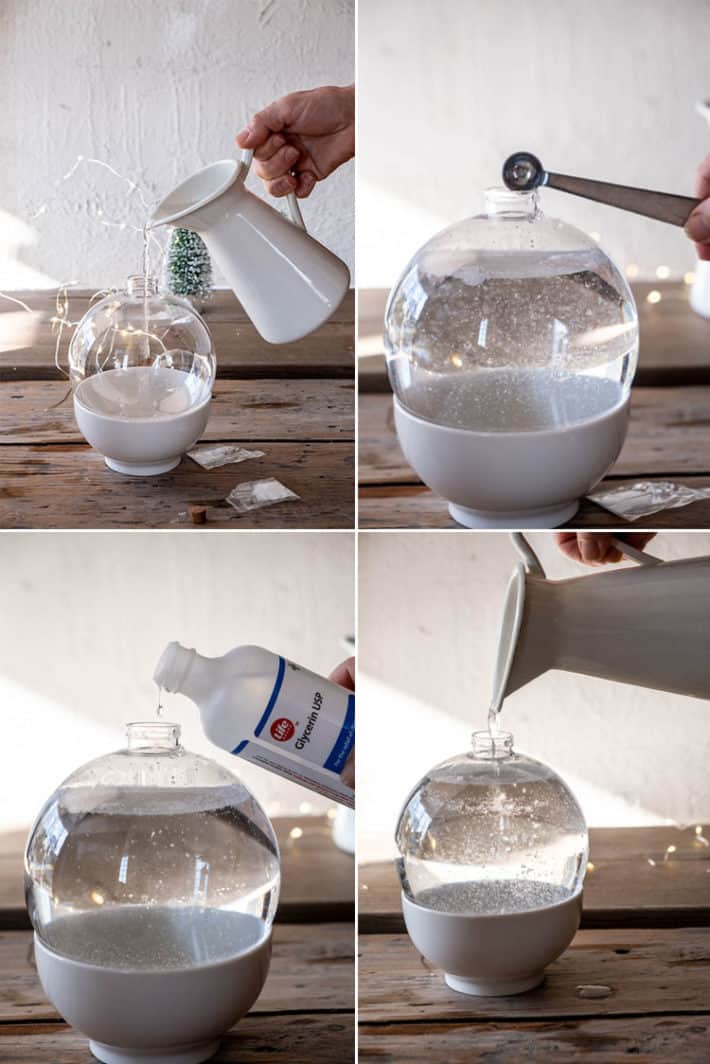 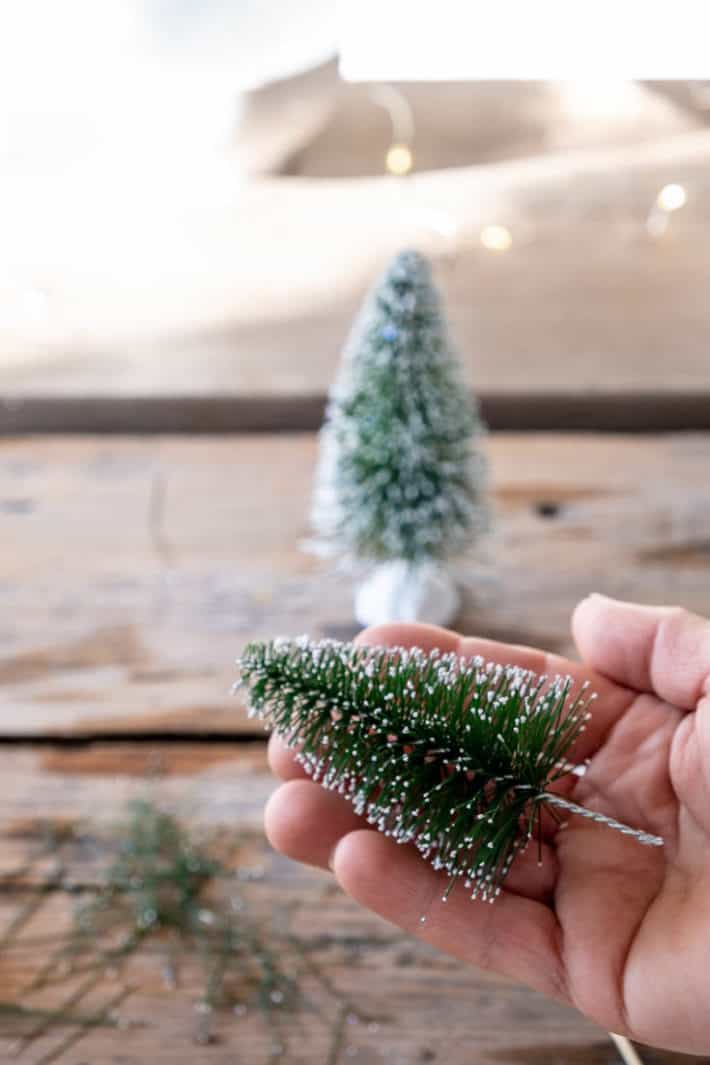 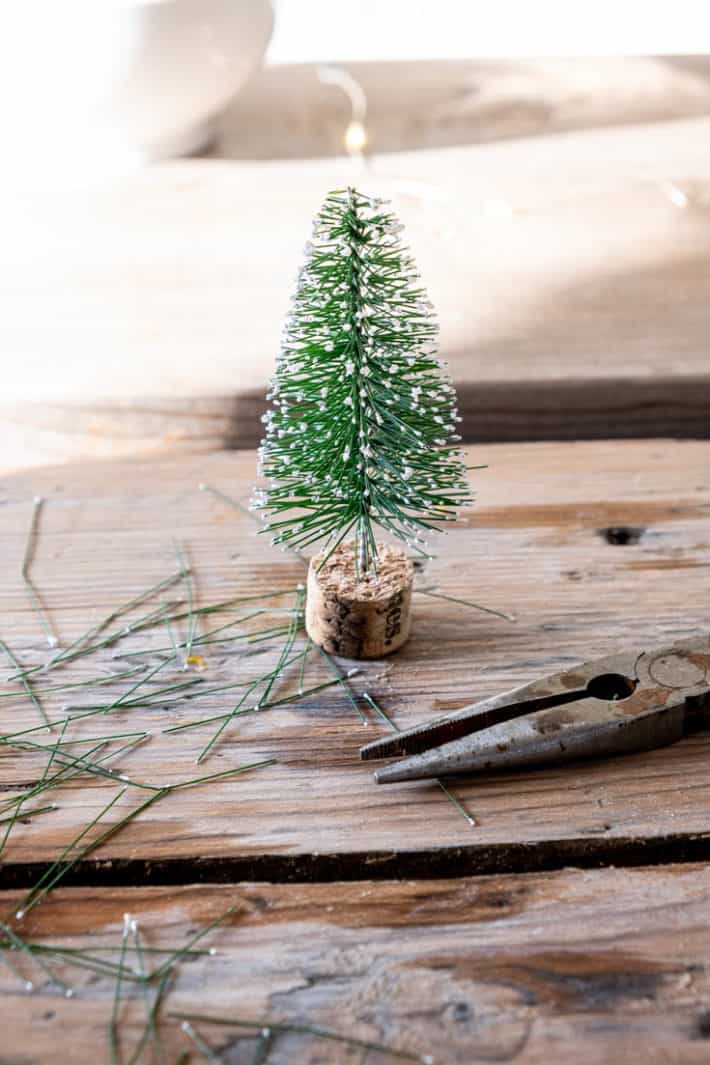 Shoving the trunk into the cork will be easier if you pre-punch a hole in the cork with a toothpick.  Also holding the trunk with needle-nose pliers to shove it down into the hole makes the job easier. 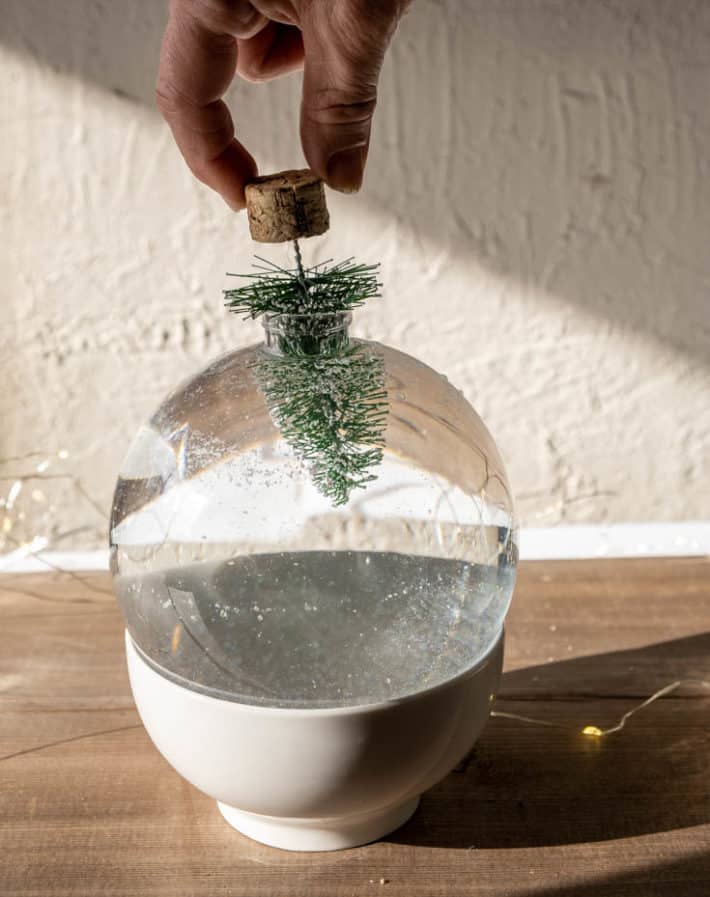 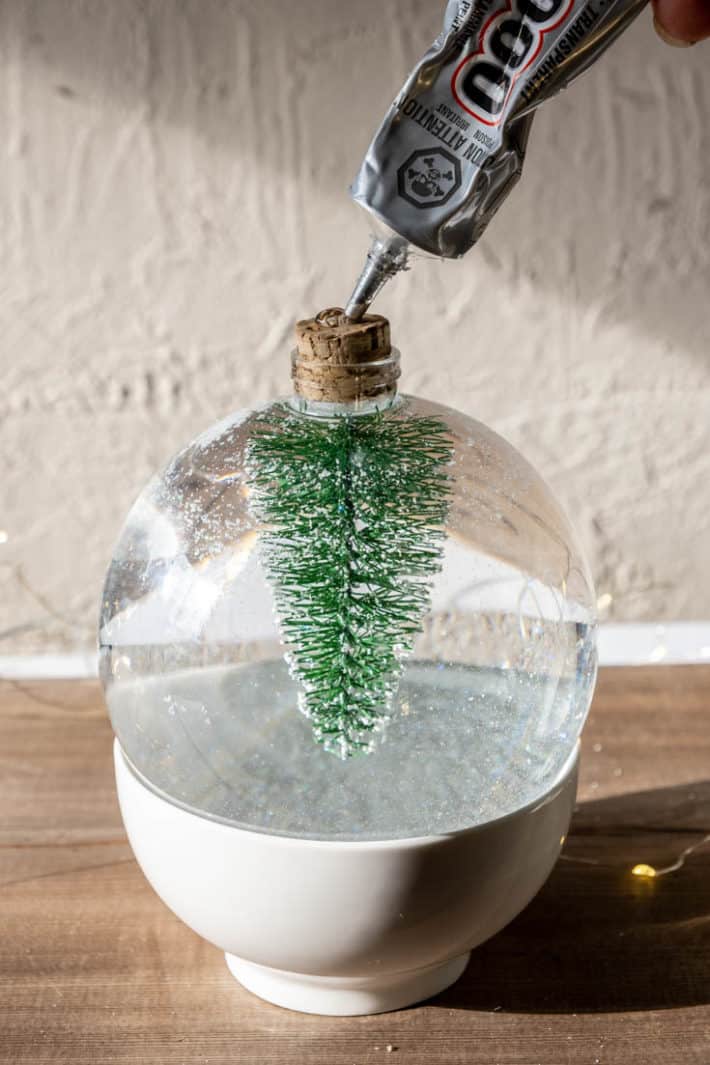 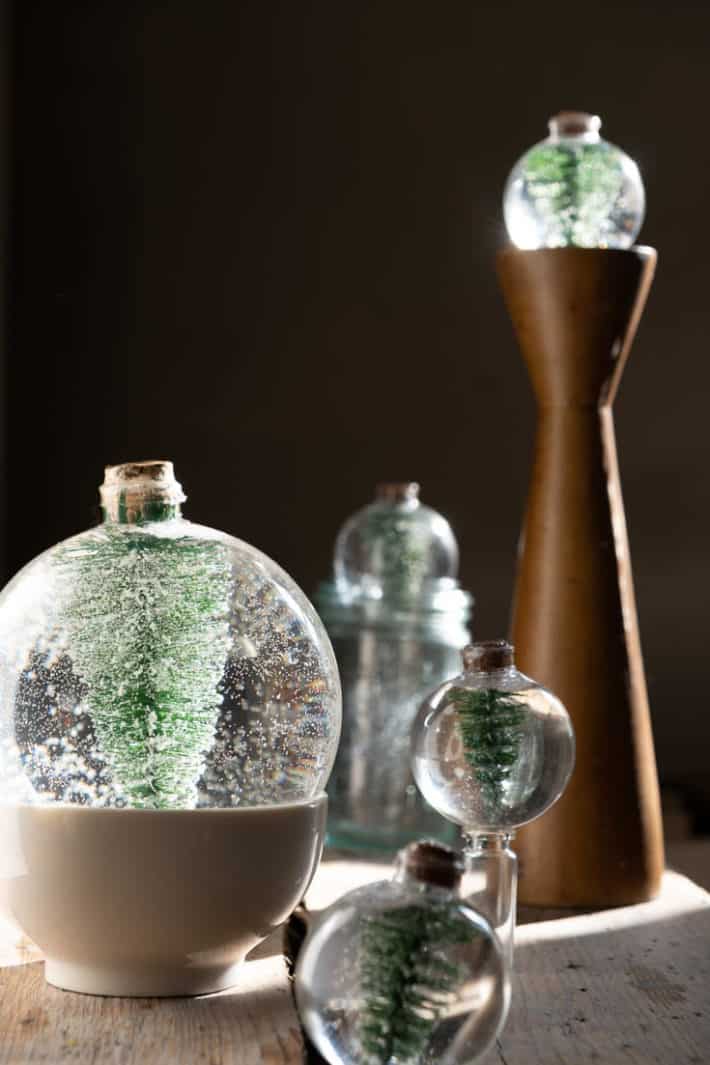 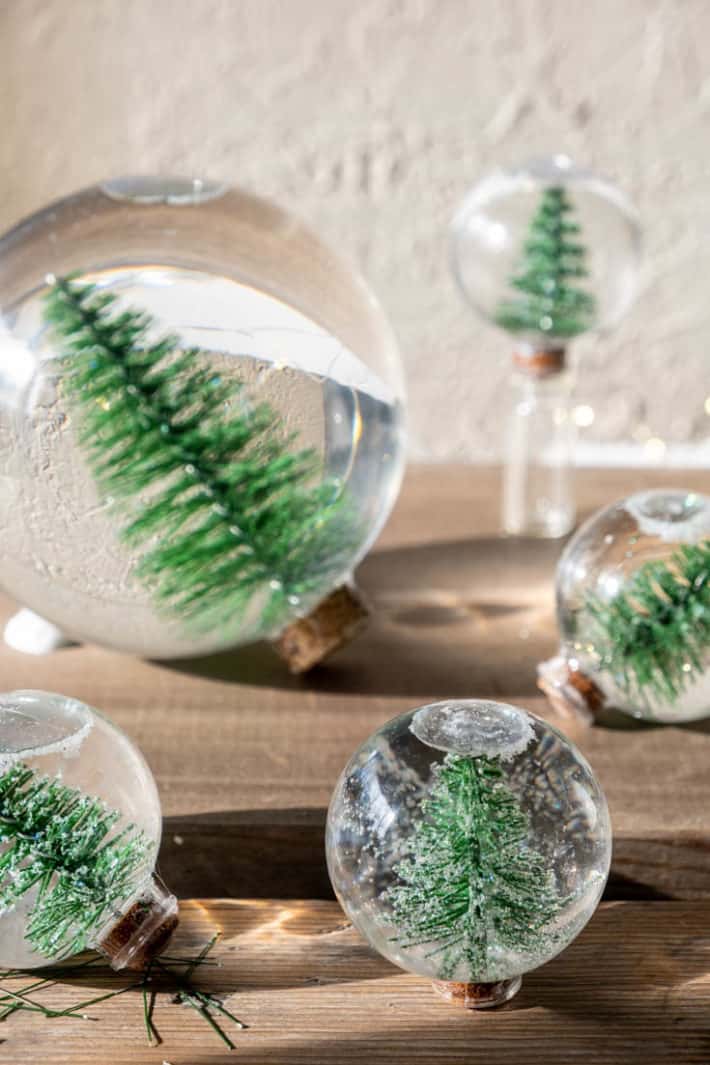 If your globes have all cured and there are no leaks you’re done!  I have to admit I like them without any base at all, just like this. But I know most people will probably want some sort of base for them. That’s where you can get creative because the base you choose will make a big difference in how the snow globes look.

You can go modern, traditional, weird – whatever you want. 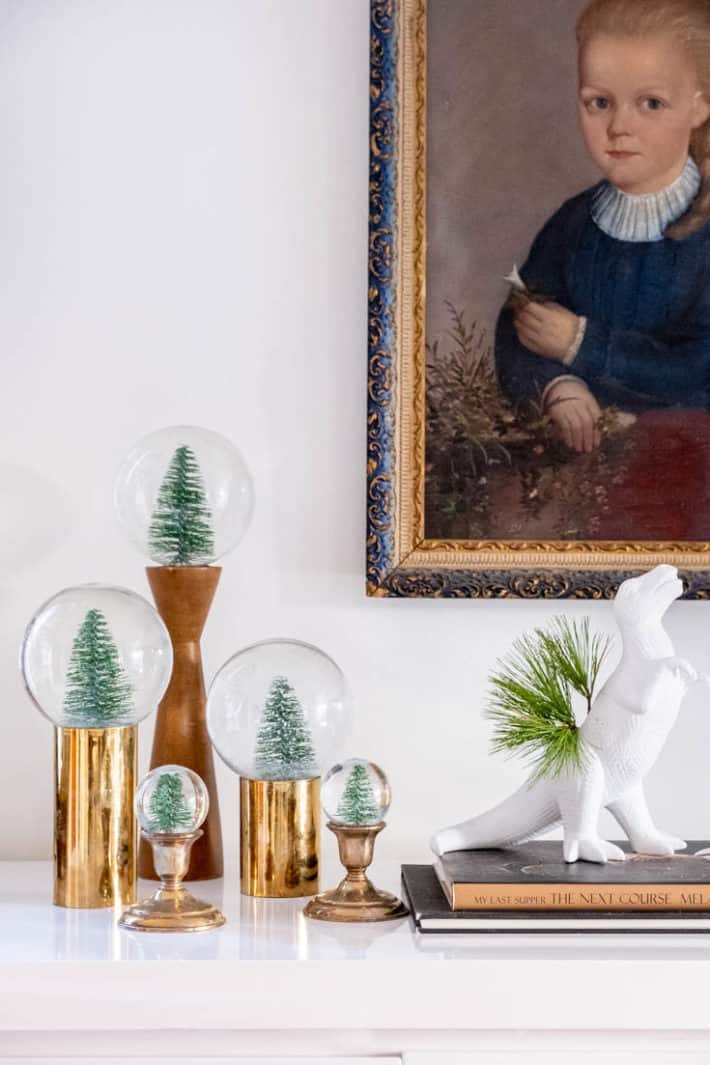 If your cork is too small for the neck of your globe, steam the cork! Putting a cork in a steamer basket for several minutes will make it permanently bigger. It's a great trick I used for my own snow globes.

Don't use too much sparkle. Excessive sparkles will just clump together in a blob.

Glycerin is optional. It helps slow down the rate the sparkles fall at, but it isn't imperative. If you don't have it, don't worry about it.

Distilled water should remain clear for longer, but it also isn't mandatory. You can just use tap water.

If your trees are too big, don't fret. You can make a really big fake tree much smaller by just using the top of it.

You can light your globe up by sticking a strand of copper wire lights into the base that you’re putting the globe in. 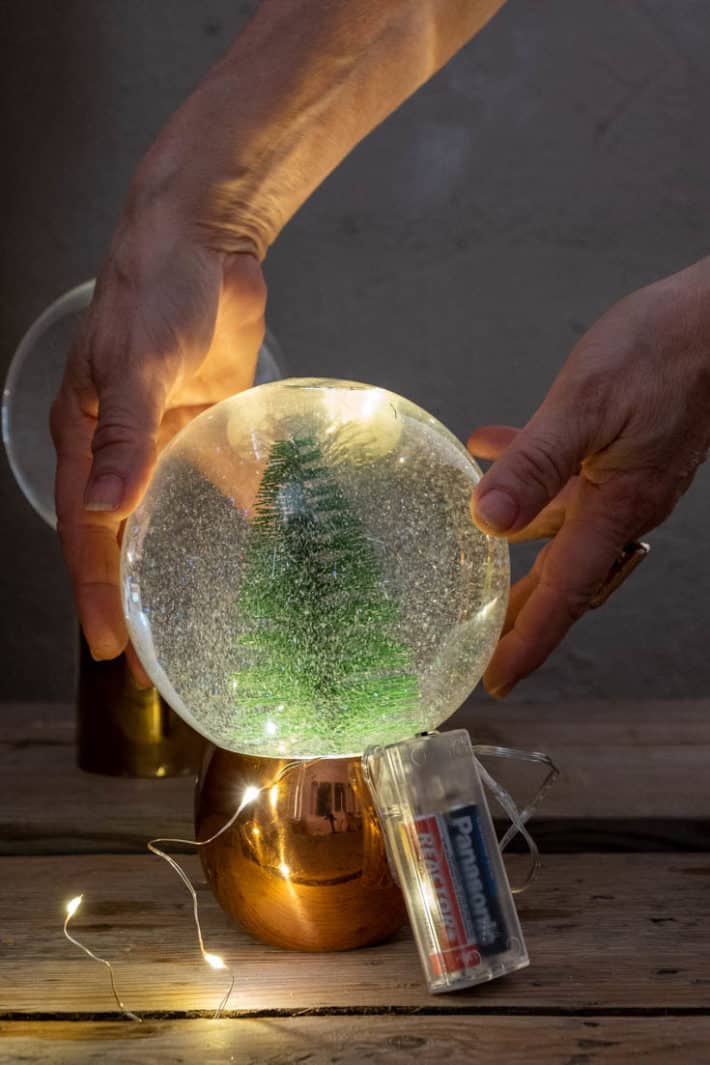 REMEMBER to check for leaking every once in a while and when you store them away after the season, store them with the corks facing up so there’s no chance of springing a leak while they’re tucked away in the basement.

These will NOT last for years. Inevitably the metal, sparkles or fake snow ends up turning the inside of the ball cloudy. But they’re fun and easy enough that you can redo them every year. Just keep reusing the same plastic balls and corks, and replace what you have inside. 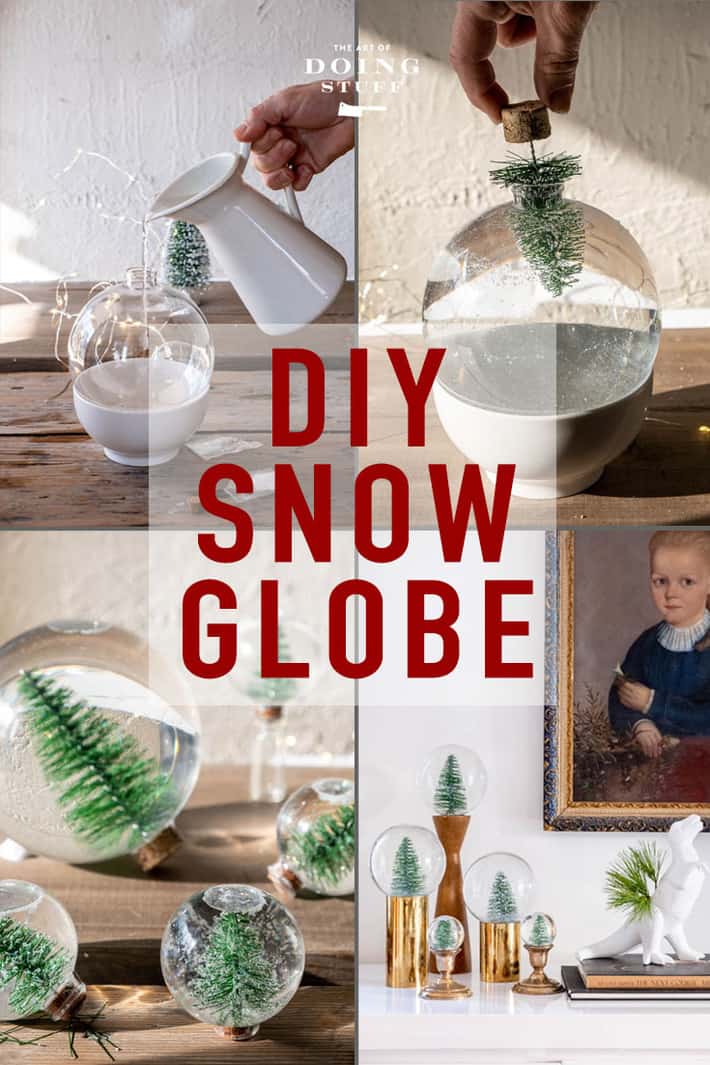