How To Raise a Monarch Butterfly. Part 3. 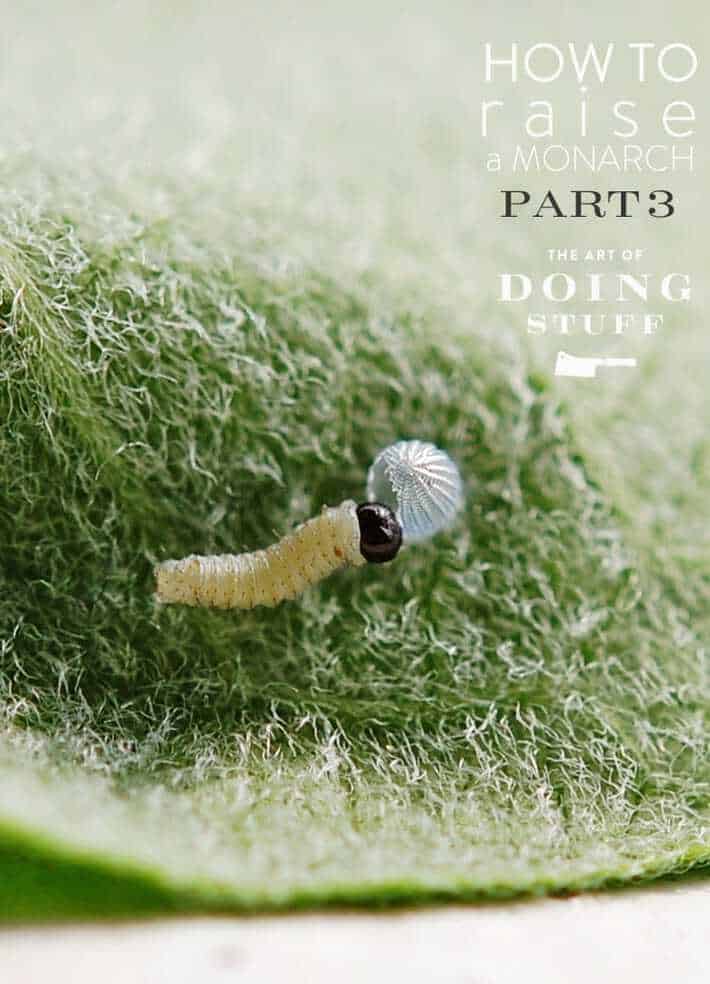 How to Raise a Monarch

Have you read How to Raise a Monarch Butterfly Part 1 and also Part 2?  ‘Cause you need to read those first.  If you *have* read parts 1 and 2 that means you have gone looking for some milkweed and eggs.  Got em?  Good.  Now we can continue.

For those of you finding this post last in the summer:  If you don’t have your eggs yet, you have until September or October to find some.  Monarchs lay their eggs until that time.  And here’s the fun part!  Regular old summer Monarchs only live for a few weeks.  The group of Monarchs that are born last … around September or October … are the ones that migrate to California and Mexico!

Days 1-5 in raising your Monarch butterfly pretty much involve staring at an egg.  I can save you a bit of staring time by letting you know that a telltale sign it’s about to hatch is the fact that the egg goes clear and the tip turns black. This black tip is actually the caterpillar’s head that you can now see inside.  Raising Monarchs is all kinds of freaky from beginning to end.

Once you see the black head of the caterpillar through the shell, keep your eye on it.  It means todays’ the day you’re going to have to start taking care of something.

Not about to hatch: 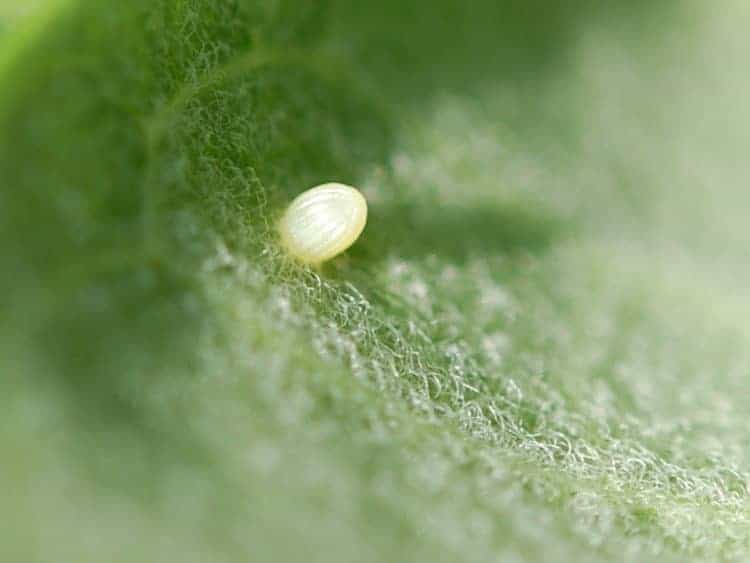 Totally about to hatch: 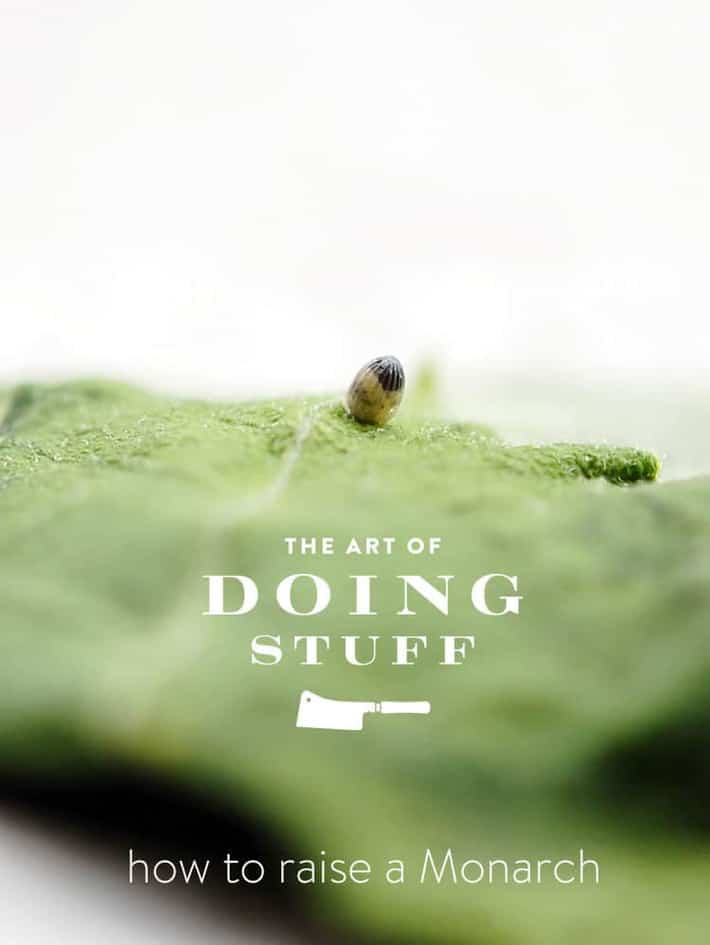 Chances are you aren’t going to see the caterpillar emerge. So for you, I sat around for 5 hours with a supply of snacks and a camera.

After several hours the caterpillar pushes itself out of the egg. 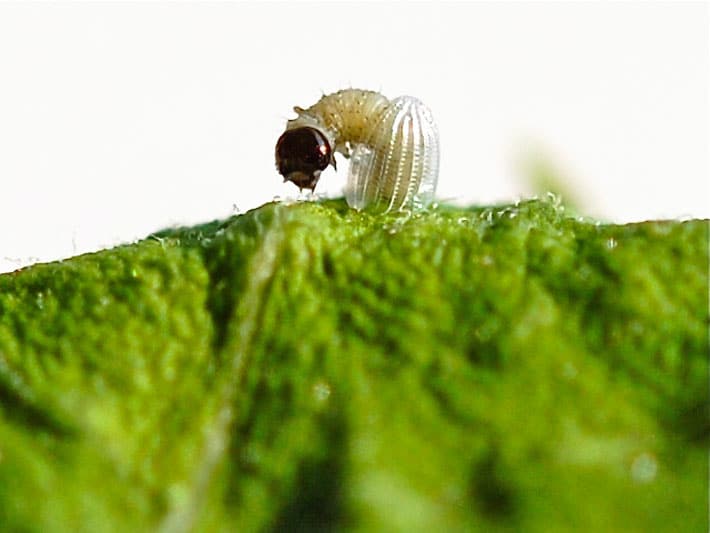 He’ll go for a little walk. (the first of many) 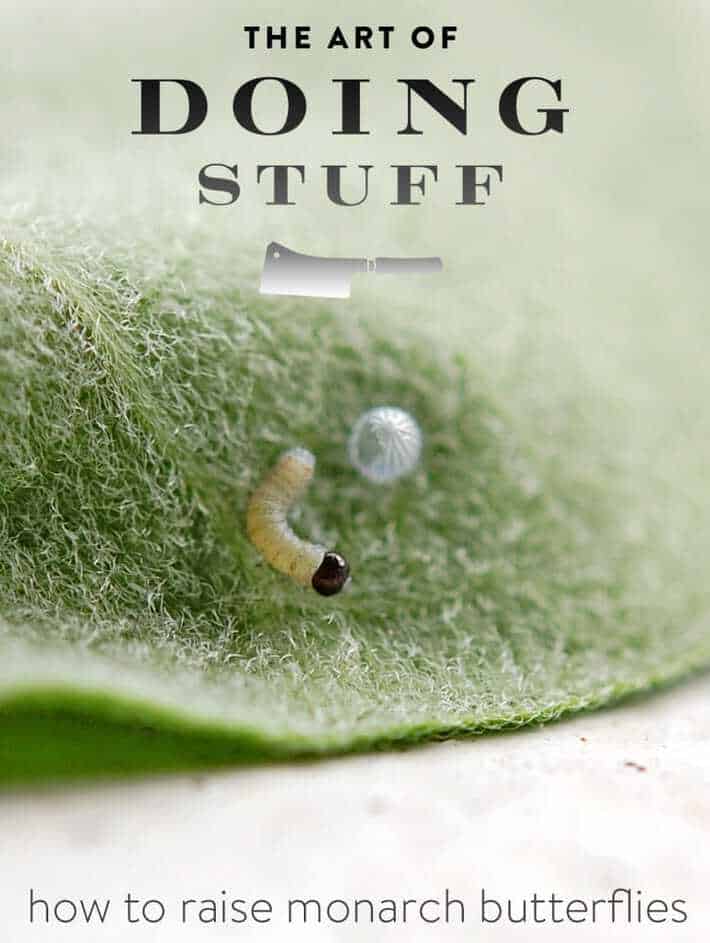 And then he’ll come back and have his very first meal. His shell. 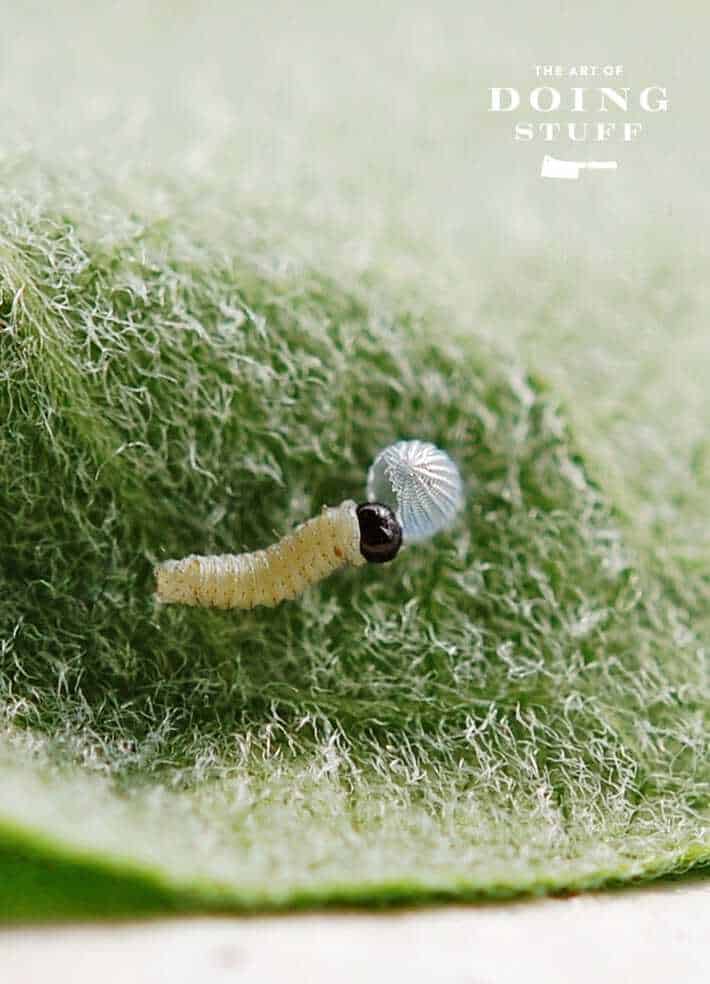 Even better?  I got it all on video.

Put your caterpillar in the nice little house you made for it. 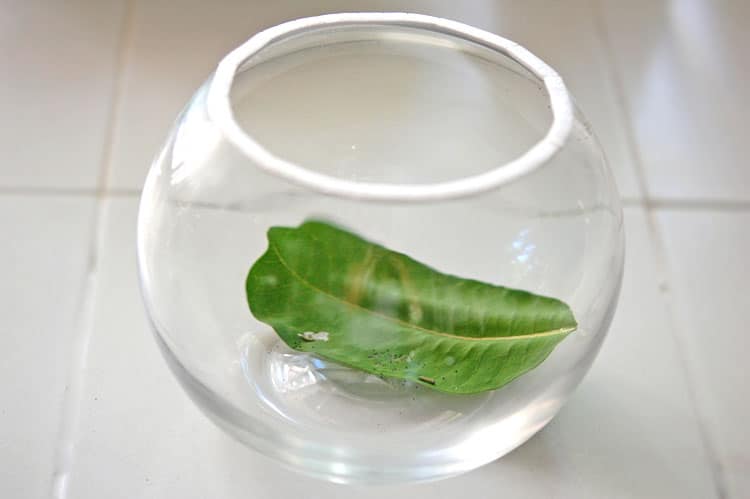 For the rest of its life you have to make sure the caterpillar has fresh milkweed leaves. Not dried up, crispy leaves. Once you see the leaf is getting to look old, replace it with a fresh one. The caterpillar eats non-stop when it’s in its growing phase. If it doesn’t have fresh food it will die. And you will be a murderer. 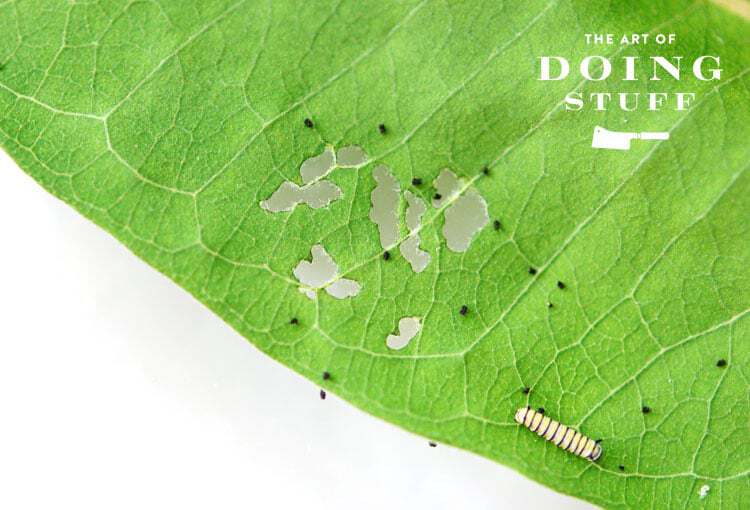 A 2 day old Monarch caterpillar and its poop.

When your caterpillar is 1-4 days old you’re gonna have a couple of problems. For starters the caterpillar is almost impossible to see and you’re going to be convinced it’s gone. It isn’t. Unless it is. For some reason the baby caterpillars want to escape their perfect little homes. And they will go on walkabout. THAT is why I tell you to use the two way tape and screening on top of your bowl.

This particular caterpillar was making its way up to the top of the bowl to try and escape. Yours will try to do the same. 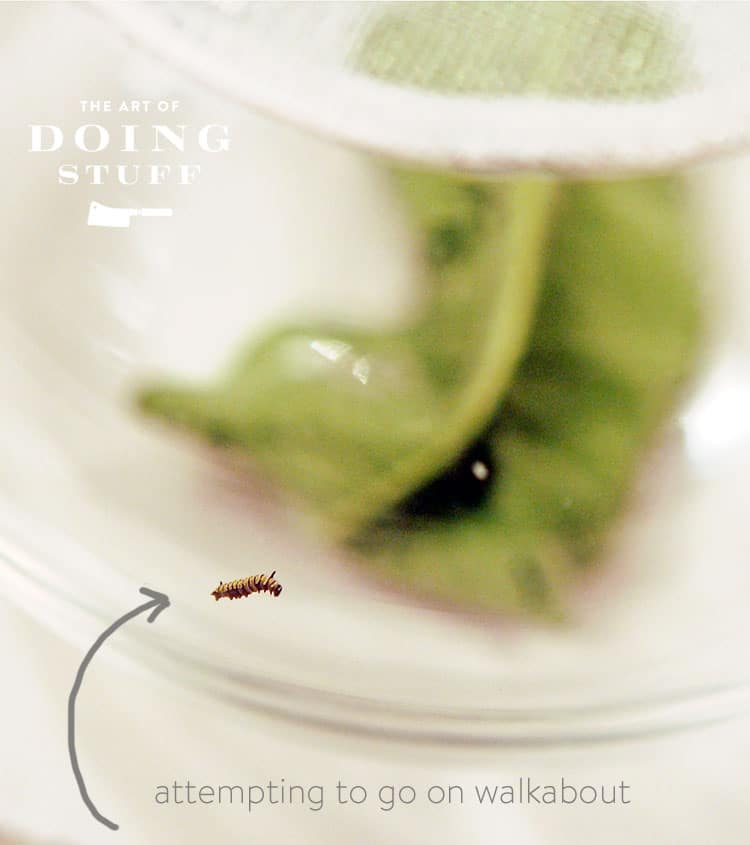 If you manage to keep track of your caterpillar for the first few days, the rest is a breeze. 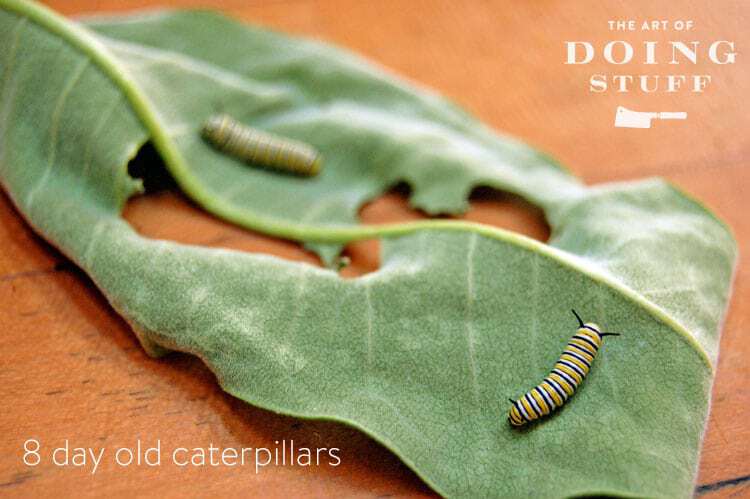 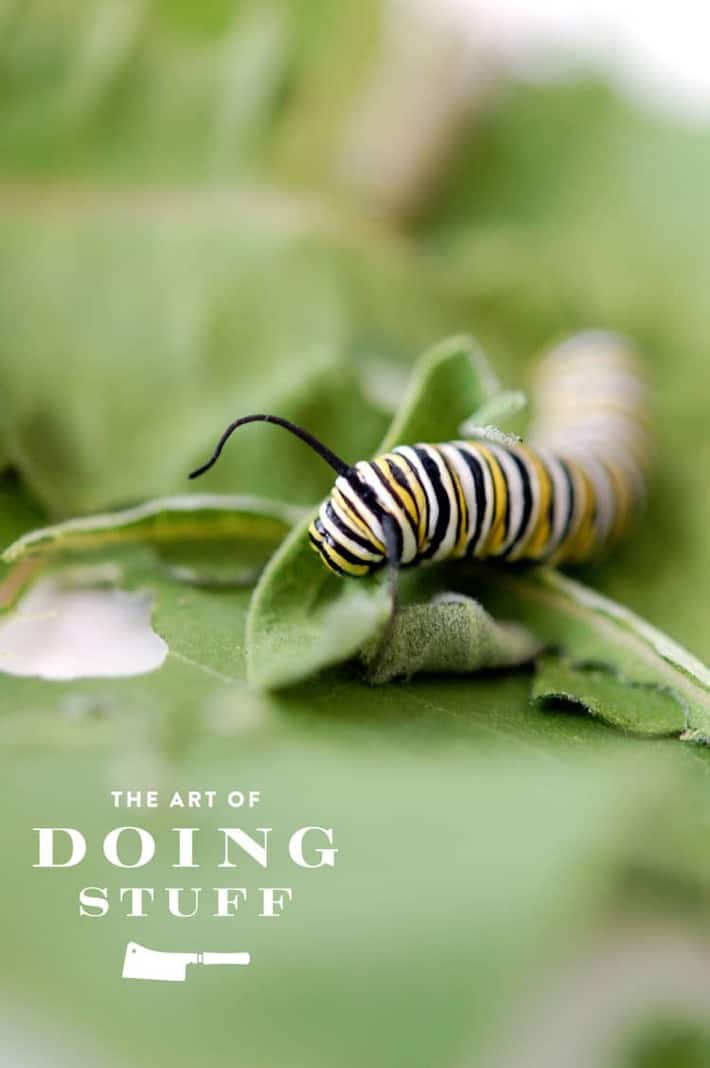 The Monarch caterpillar has 5 instars. That means it sheds its skin 5 times. Each time it sheds its skin it emerges a bigger, brighter version of itself. You’ll know when it’s about to shed its skin because it stays still for HOURS. It doesn’t eat, it doesn’t move, it just lays there. You’ll think it’s dead. It’s not. Remember … it does this “playing dead” thing 5 times. It’s kind of like a hibernation.

This is the final skin shedding for this caterpillar. 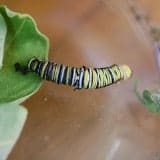 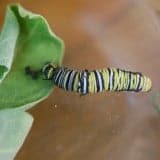 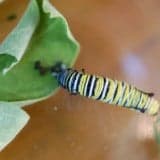 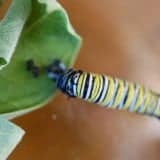 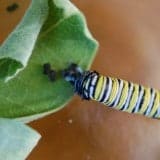 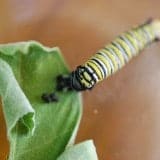 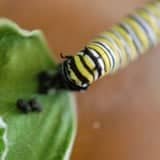 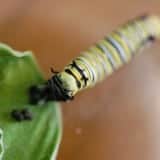 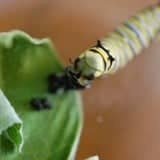 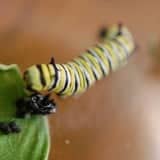 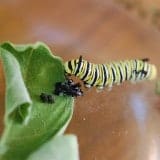 Notice how squashed down its new antennae are. 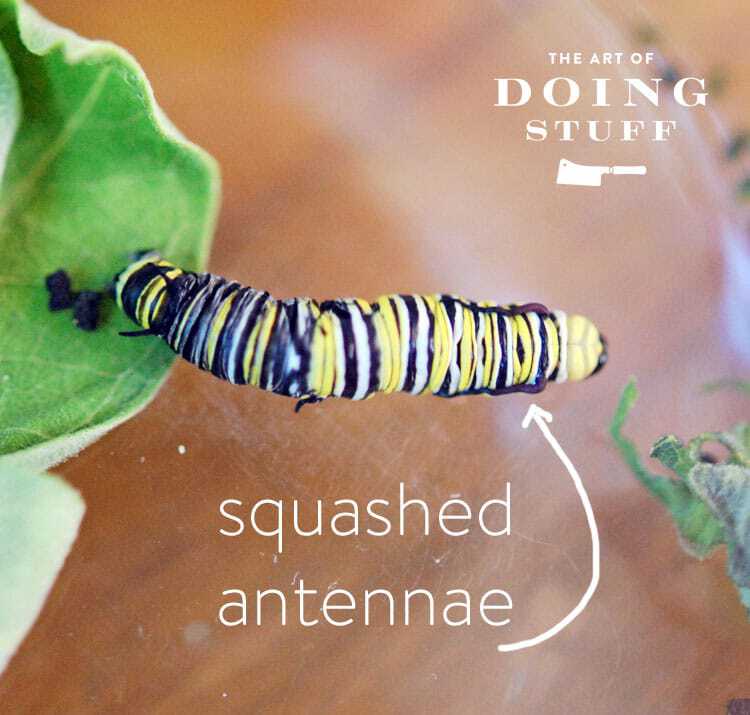 This final caterpillar stage will last a couple of days. Keep feeding it. In return, out of love and kindness, it’ll keep pooping.

A day or so after the caterpillar sheds its final skin it’ll start wandering again.  It’ll probably make its way up the sides of your bowl and crawl around on the screen for a while. It may even take a bit of a nap there.    It’s picking out its final resting place.  Then it’ll probably wander back down again, snack for another half day or so, then wander back up onto the screen. 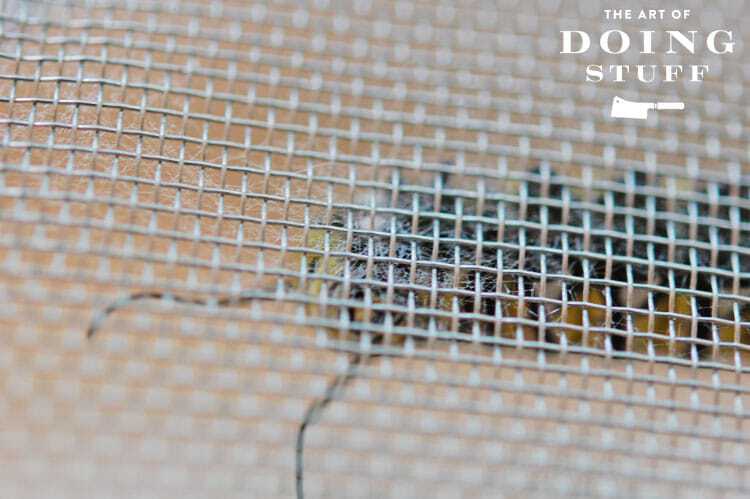 Once the caterpillar realizes life would be much better as a butterfly – what with the ability to fly and all – it crawls up onto the screen and starts spinning a cotton-like thread out of its mouth.

Then the caterpillar will turn around and stick its bum into the miniature cotton ball it’s made.

Over the course of a couple of hours the caterpillar will loosen it’s grip on the screen. One by one, leg by leg it’ll let go.

Until it drops down, held only by its bum, into a “J” shape. Or a “6”. Depending on which side you’re lookin’ at of course. 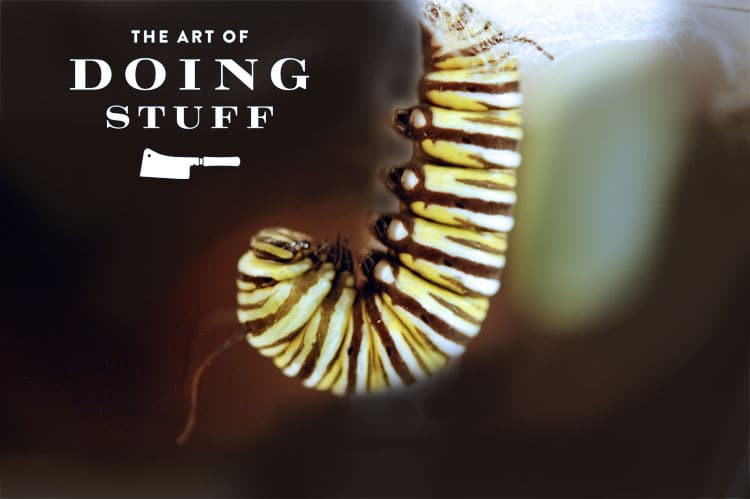 Coming up tomorrow things start to get WEIRD.  In Part IV